BACK TO ALL NEWS
Currently reading: Buy them before we do: second-hand picks for 2 October
UP NEXT
Alfa Romeo to show new sports car in early 2023

Buy them before we do: second-hand picks for 2 October

A bright-green, 202bhp supermini with a lairy bodykit and a sports exhaust probably isn’t too high on your wish list if you’re no longer in secondary school or care what people think of you - but cast your prejudices aside for a second.

Not only does the Nürburgring Edition pack a 13bhp and 37lb ft boost over the standard bolshy Corsa VXR but it also came with uprated Bilstein dampers, Brembo performance brakes and bespoke alloy wheels. On top of that, it was the first Vauxhall model of the new millennium to receive a limited-slip differential. This was no half-baked commemorative trim package.

When we first drove it just nine years ago, we eagerly declared it to be “stunning” and thoroughly worthy of its £22,000 price, which makes this sub-£8000 example look amazing value, especially when today’s Ford Fiesta ST, with a 5bhp deficit and a missing cylinder, asks more than £22,000 for a similar experience. 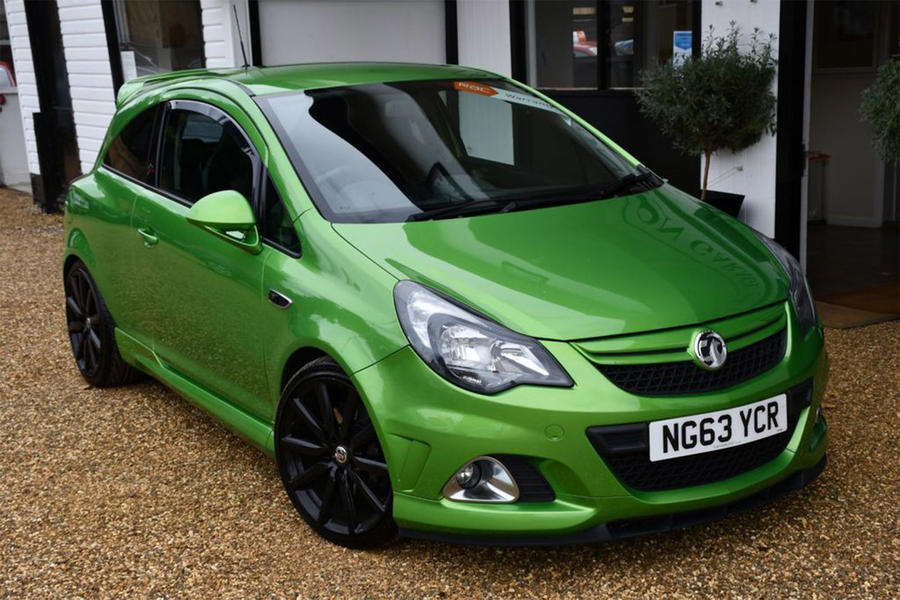 The 2014 VXR that jumped out at us from the classifieds has covered a reasonable 58k miles and has been in the hands of just two people since new. That’s good news, as it implies it has been properly maintained.

And while that paint might make you stick out like a sore thumb, it’s the right hue for a Nürburgring Edition, which will surely work in its favour in the future. As with any VXR, cracked pistons and turbo failure are worth watching out for; you can avoid a costly repair if you catch these early.

There are cheaper VXRs, but some have been questionably modified and others have more miles under their belts, so the extra outlay is money well spent, if you ask us. 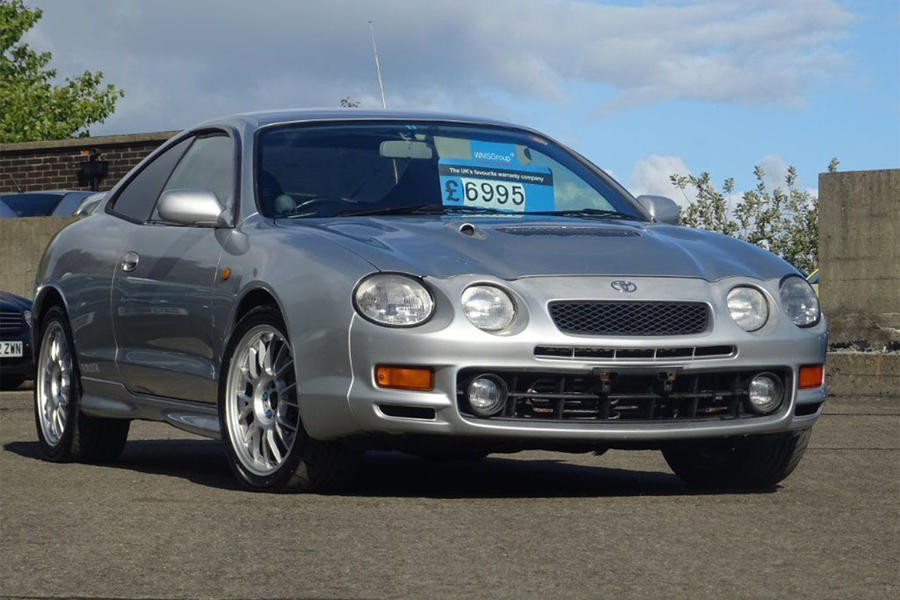 The Vauxhall Corsa VXR is accomplished, refined and quick, but it can’t match the Clio’s sheer panache

Toyota Celica 2.0 GT-4, £6995: Refreshingly standard, save for some welcome goodies, including a boost gauge, bucket seats and a stainless steel exhaust, this Celica is a nicely maintained, low-cost alternative to more highly strung 1990s Japanese sports cars such as the Toyota Supra. 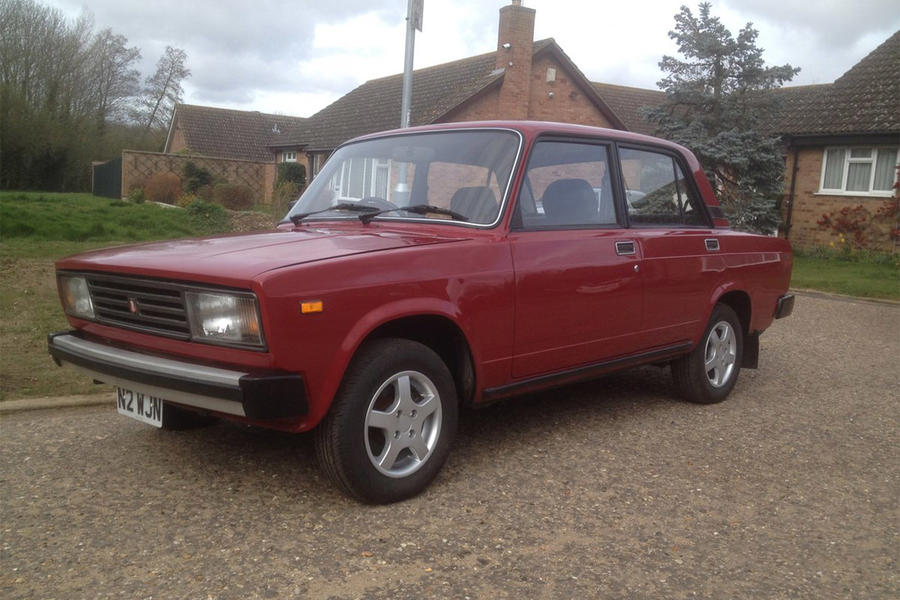 Lada Riva 1.5 E, £6500: The seller of this lovely Lada reckons they will lose thousands on its sale, having carried out a comprehensive restoration. You used to be able to buy a Riva for peanuts, but there are only a handful left in the UK and they’re quickly garnering cult appeal. 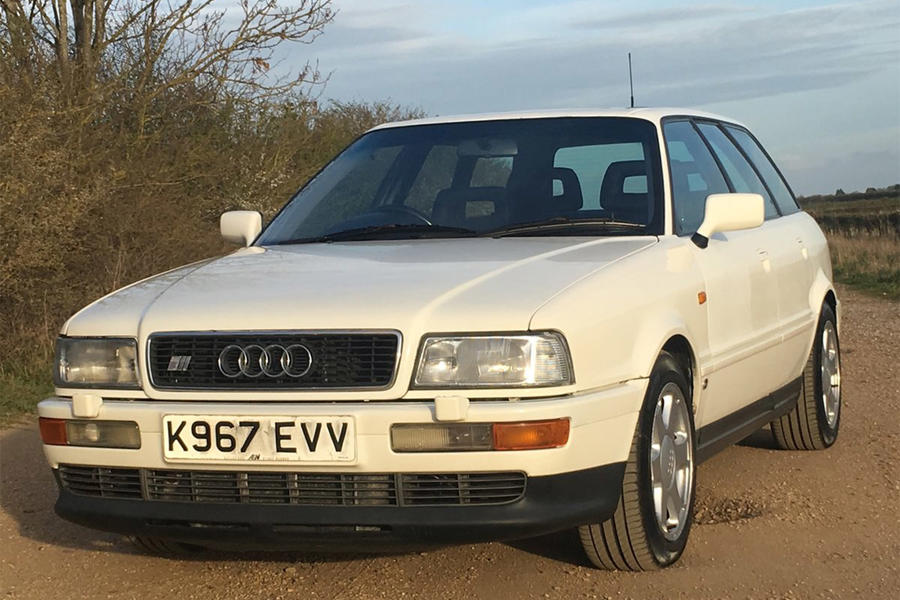 Audi S2 Avant, £7995: Just 320 examples of Audi Sport’s first production model came to our shores, and far fewer are left today. This honest example wears a bit of rust around its front wings but still drives well and has just had £7000 spent on it in maintenance and parts. 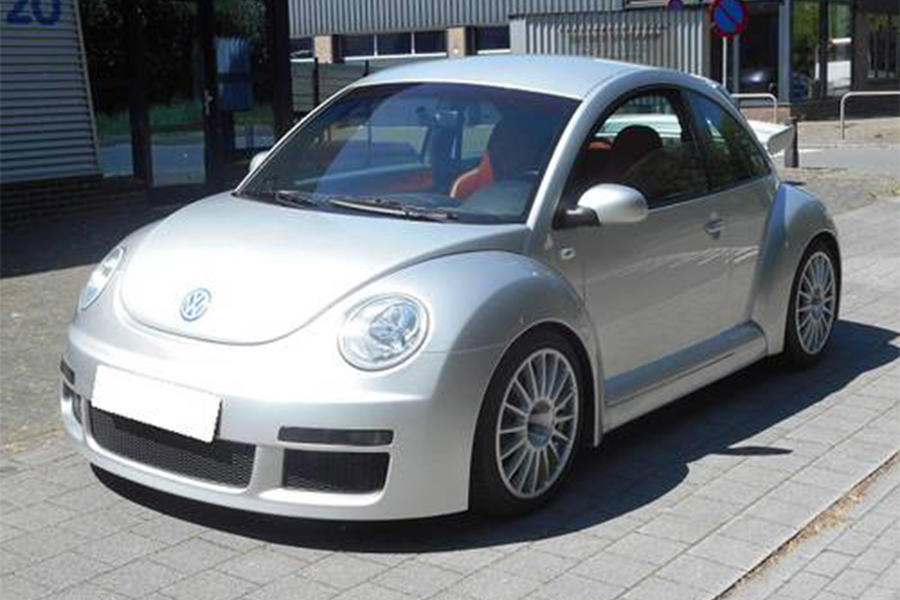 Volkswagen Beetle RSi, £43,900: Volkswagen made only 250 examples of the four-wheel-drive 221bhp Beetle RSi, and this is your chance to own number 40. Essentially a rebodied Mk4 Golf R32, it’s one of the most collectable versions of the iconic Bug, and there’s not a flower in sight. 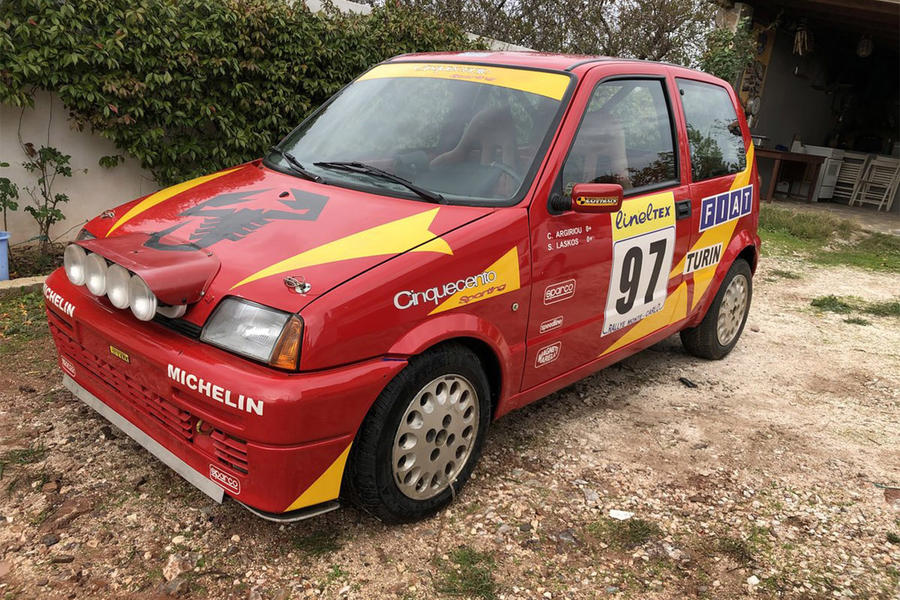 Fiat Cinquecento Abarth: An Inbetweeners fan could re-enact the lads’ hilarious holiday by picking up this 1996 Fiat from Athens. It’s more serious than Simon’s yellow Hawaii model, mind, with an Abarth bodykit, a stripped-out, rally-ready interior and an eye-catching livery first applied when it did the Monte Carlo rally in the late 1990s. 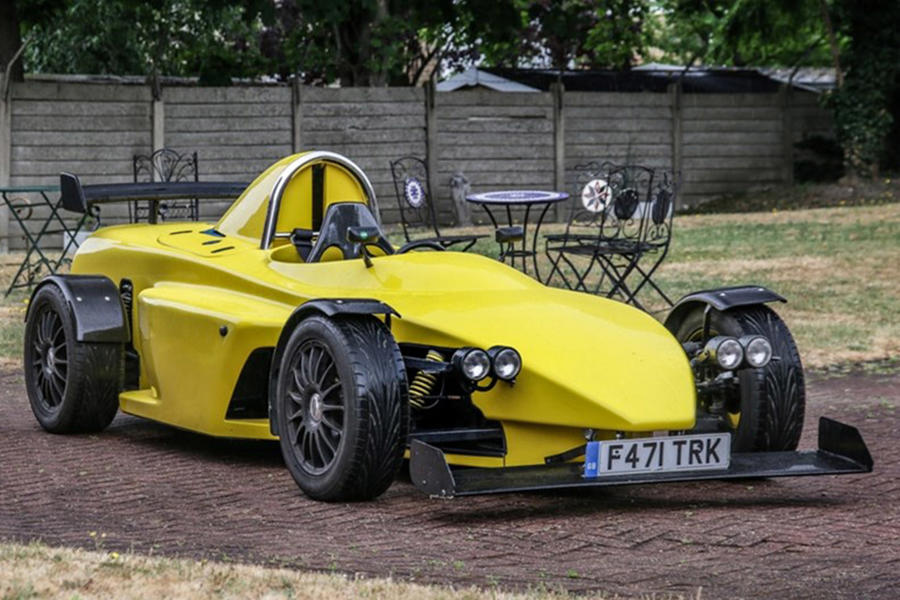 Edge Devil: If you want a no-holds-barred track toy with open wheels and an uprated Audi engine, you could go for a new KTM X-Bow – or you could save around £50,000 by tracking down an Edge Devil. Built in North London from 2004 to 2009, the Devil is a lightweight, street-legal single-seater that’s capable of accelerating from 0-62mph in just a hair over three seconds and topping out at 140mph. The hammer fell on this late example – one of just 14 believed to have been produced – at £7480, following appearances at Goodwood and other enthusiasts’ events. 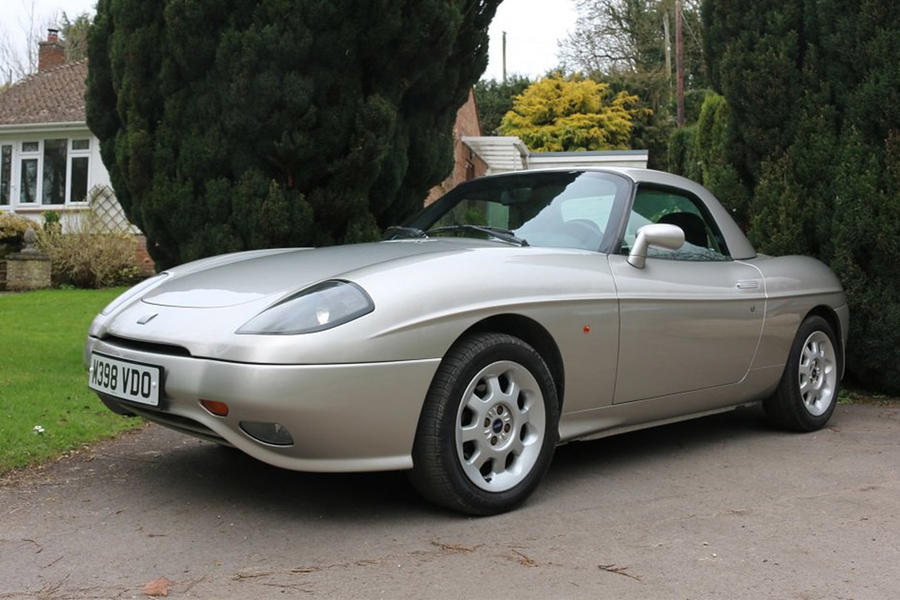 Fiat Barchetta, £7500: Even at £7500, this Barchetta is far from the priciest example on the UK market, which is proof that this pretty Italian roadster’s days of depreciation and disrepair are long since past. Fiat’s Punto-based answer to the Mazda MX-5 was never the keen driver’s choice, and not just because it was sold only in left-hand drive, but the 1.8-litre twin-cam engine’s 129bhp output is just enough for a spot of front-driven friskiness on a curvy road. This car’s appeal is bolstered by its rare factory hard-top, new cambelt and completely rust-free bodywork. 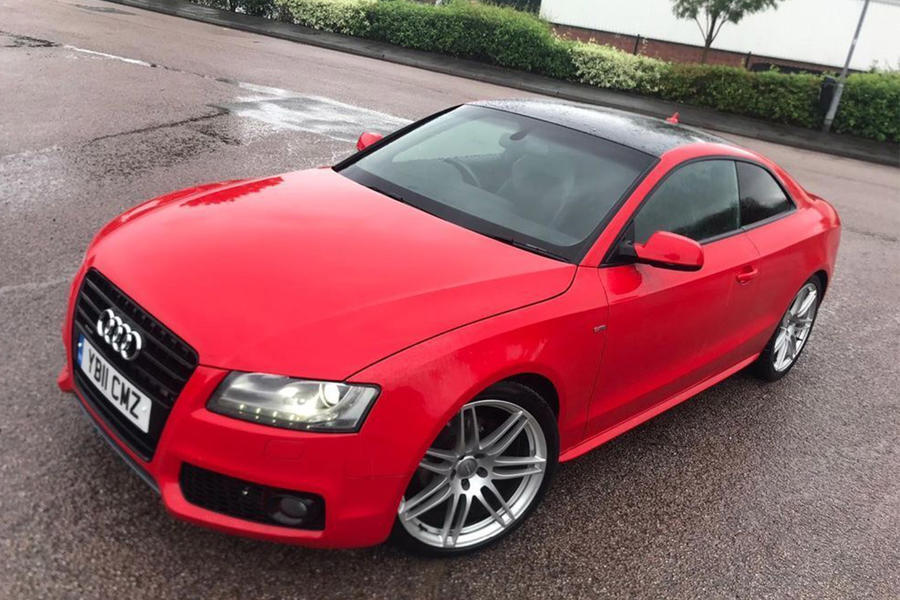 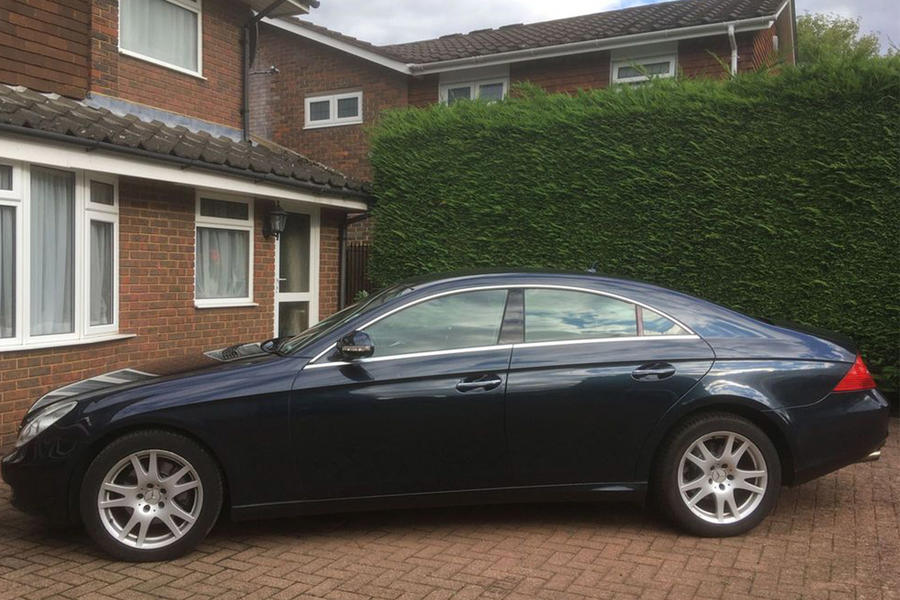 Felix Page: I’ve explored the upper reaches of James’s budget, because I think this top-spec Audi A5 from 2011 is worth every penny of its asking price. It’s one of the most handsome Audis of the modern era and equipped with the coveted Black Edition styling package, a forceful but frugal diesel motor and more kit than you could shake a stick at. Chuck your stick in its 455-litre boot instead. Can your coupé cope with such capaciousness, Max?

Max Adams: Yes it can, Felix; thanks for asking. The 505-litre hold of my Mercedes CLS will take whatever its four occupants care to bring, plus they needn’t face the indignity of squeezing into the back, because there are actually back doors. And it has a sumptuous 3.0-litre V6 under its pretty nose, not a clattery 2.0-litre four-banger with a mileage that makes me wince.

FP: Two seconds, Max, I’m just looking for something… Oh, here it is: “A car with a fixed roof, two doors and a sloping rear.” That’s how my dictionary defines coupé. If boot space was all James cared about, he would buy a Ford Transit.

MA: That’s a rather prescriptive way of looking at things. The market for coupés has changed, so a sleek four-door can be considered a coupé too, particularly when it looks this good.

FP: It’s a looker, sure, but it will be rather unwieldy in a car park. Also, my A5 may have a fair few miles, but I would be warier of a sub-80k-mile reading on a 13-year-old so-called grand tourer…

MA: Its MOT and tax are up to date, so nothing’s fishy. I would feel more uncomfortable about the terribly offset driving position of your manual A5, which reminds me of a 1970s Italian classic.

Verdict: For his creative use of the word coupé, I’ll take Max’s Mercedes.

Barchettas are so pretty.

Barchettas are so pretty.
scrap 2 October 2020

I got excited there, before

I got excited there, before realising that the white Audi in your photo is not an S2 Avant. What is going on here?