BACK TO ALL NEWS
Currently reading: 2021 Vauxhall Mokka: UK pricing confirmed for bold crossover
UP NEXT
Alfa Romeo to revive GTV as an EV in sweeping range renewal

The new Vauxhall Mokka has gone on sale in the UK, with prices starting from £20,735 and the electric Mokka-e priced from £30,840.

The radically restyled crossover is based on the PSA Group’s Common Modular Platform (CMP), which can accommodate both combustion and electric powertrains, and will be available with the same choice of three engines - two petrol and one diesel - as its Peugeot 2008 sibling.

The Mokka-e uses the same 134bhp motor and 50kWh battery as the e-2008. It promises a 201-mile WLTP range and offers 100kW DC rapid-charging to replenish 80% battery capacity in half an hour. It can also accept single-phase and 11kW three-phase charging. It will be offered in SE Nav Premium trim in the UK, with the £30,840 price including the government's plug-in car grant.

The entry-level petrol option, a 1.2-litre turbocharged three-cylinder engine, produces 99bhp and 151lb ft. Paired exclusively with a six-speed manual gearbox, it manages between 49.6 and 51.4mpg on the WLTP cycle, while emitting 124-128g/km of CO2, according to preliminary figures. 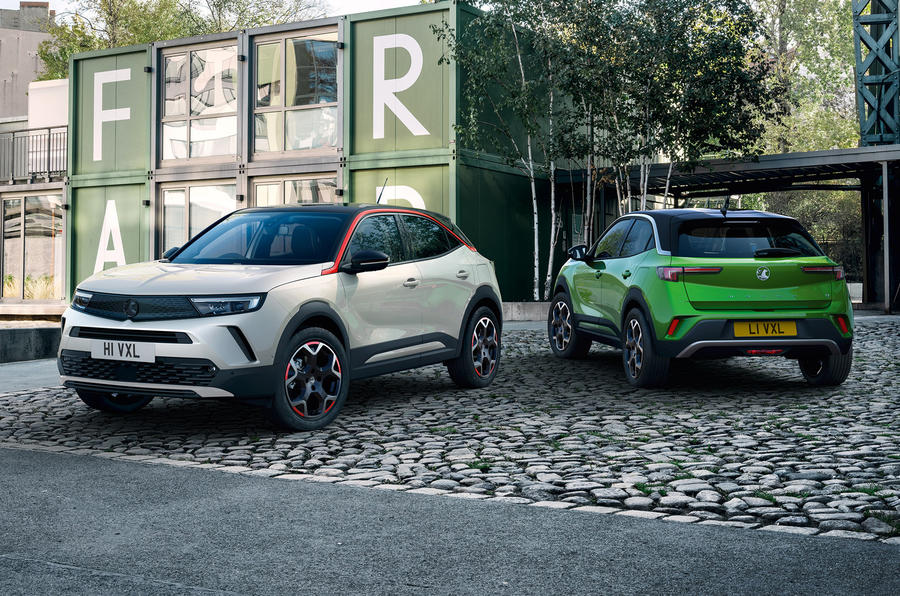 Both petrol engines are said to offer “high efficiency and lively performance”, courtesy of their low-friction design and quick-reacting turbocharger, which boosts torque from low revs.

The range-topping Ultimate Nav trim features keyless entry, a wireless smartphone charger, 18in alloy wheels and LED headlights. A limited-run Launch Edition will be available for both the Mokka and Mokka-e, featuring advanced parking assistance and leather upholstery.

The new Mokka features Vauxhall’s new Vizor front end and is characterised by its short overhangs and widened stance compared with the old Mokka X. Although its wheelbase is slightly longer than that of its predecessor, it's 12.5cm shorter overall, weighs 120kg less and - in the case of the electric version - is up to 30% stiffer.

Inside, the compact SUV features a pair of widescreen digital displays - a 12.0in gauge cluster and 7.0in or 10.0in infotainment touchscreen - but retains separate controls for essential functions, “avoiding hazardous exploration into sub-menus”. Leather, Alcantara and standard cloth upholsteries are available, while the front seats are six-way adjustable as standard.

Like the Mokka-e, the combustion-powered car is equipped with an array of driver assist programmes as standard, including forward collision alert, automatic emergency braking and pedestrian detection. Adaptive cruise control, intelligent LED headlights and wireless phone charging are also equipped as standard.

For the first time, the Mokka will be available in performance-inspired SRi range-topping trim, marked out from the standard car by its gloss black front grille, chrome exterior trim, 18in two-tone alloy wheels and red side window frame.

Deliveries are due to begin in April 2021.

Especially the electric one. Rivals with longer ranges and warranties are slightly cheaper too (but still a con, like all EVs).

Might be a nearly new / heavily depreciated bargain in a few months time though.

I'm not an SUV fan but I like the relative simplicity of this design. Too many new SUVs, like the new Tucson, for example just try too hard to be different, ending up with loads of conflicting lines and shapes.

Best looking Vauxhall in a

Best looking Vauxhall in a long long while