BACK TO ALL NEWS
Currently reading: Buy them before we do: second-hand picks for 18 June
UP NEXT
Is the N mightier than the Ford? Hyundai i20 N vs Fiesta ST

Buy them before we do: second-hand picks for 18 June

With Caterham Sevens and Lotus Elises still tucked up warm and snug in their garages, we need something more predictable and watertight for our B-road antics in the coming months
Share
Open gallery
Close
Share story

Welcome to summer 2021. Not exactly balmy, is it? With Caterham Sevens and Lotus Elises still tucked up warm and snug in their garages, we need something more predictable and watertight for our B-road antics in the coming months.

How about the S1? Packing the Volkswagen Group’s 2.0-litre EA888 turbo engine, this hot A1 arrived in 2014 as Audi’s answer to the Ford Fiesta ST and Volkswagen Polo GTI.

With a bespoke quattro four-wheel drive system, the S1 can put down its 228bhp effectively whatever the weather. And with 272lb ft of torque, it can hit 62mph in less than 6.0sec. 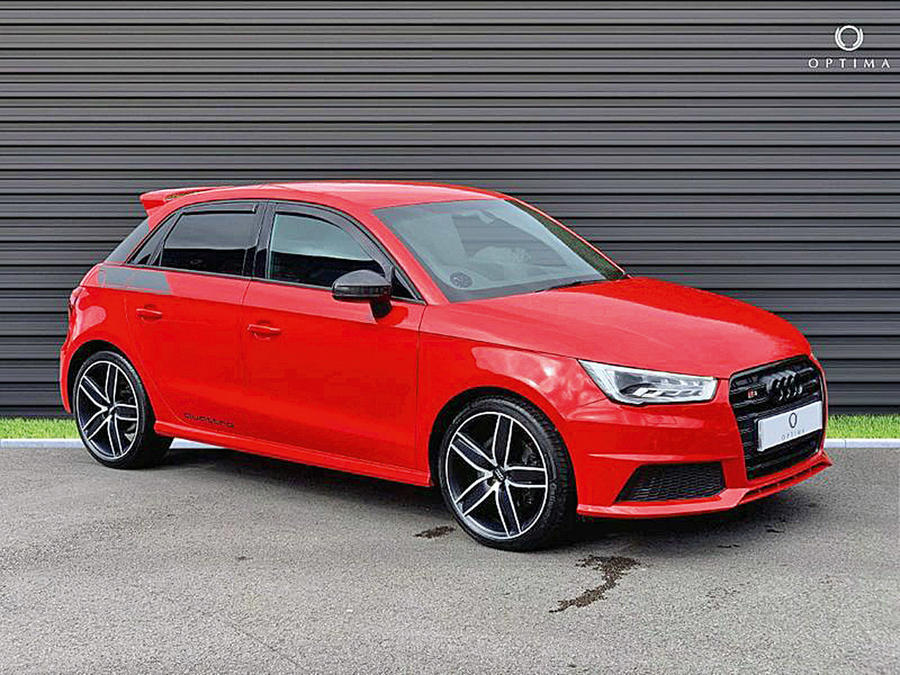 There’s no sporting variant of the current second-generation A1, and it’s very rare for cars of this size to be equipped with such a complete four-wheel drive system. This fact, partnered with its high original launch price, means the S1 only looks all the more appealing today.

We’ve got our eye on this five-door S1 Sportback quattro in Competition trim and decked out in striking Misano Red. While the car’s infotainment system is now showing signs of its age, the interior quality is high and the original owner’s generosity with the options list means there’s cruise control, parking sensors and high-beam assistance. Plus you get the standard LED headlights, Bluetooth and climate control to play with.

This 2017-reg example has 46,000 miles on the clock, which is certainly nothing to worry about, especially as it comes with a full service history and has recently passed an MOT test.

If you want supermini levels of urban manoeuvrability combined with the open-space flamboyance of a full-sized hot hatchback, not to mention an upmarket interior and badge, then the S1 is really quite a compelling option. 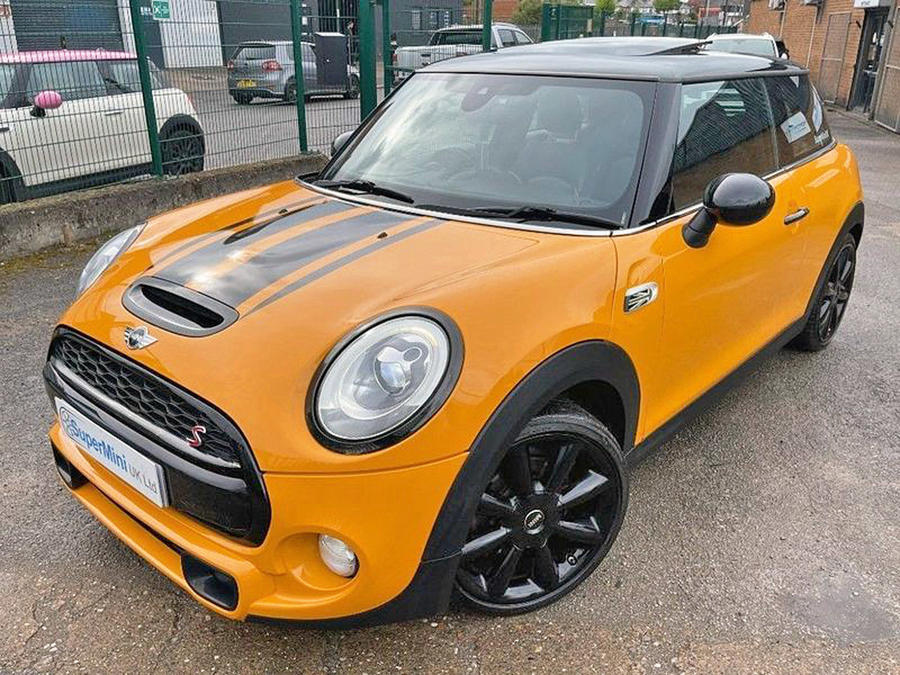 Mini Cooper S 3dr £11,490: This Mini looks the part and comes with a host of extras. It has covered fewer than 65,000 miles and is fitted with the Chili Pack, which brought automatic LED headlights, nicer seat fabric, mood lighting and black 17in Cosmos alloys. What’s not to like? 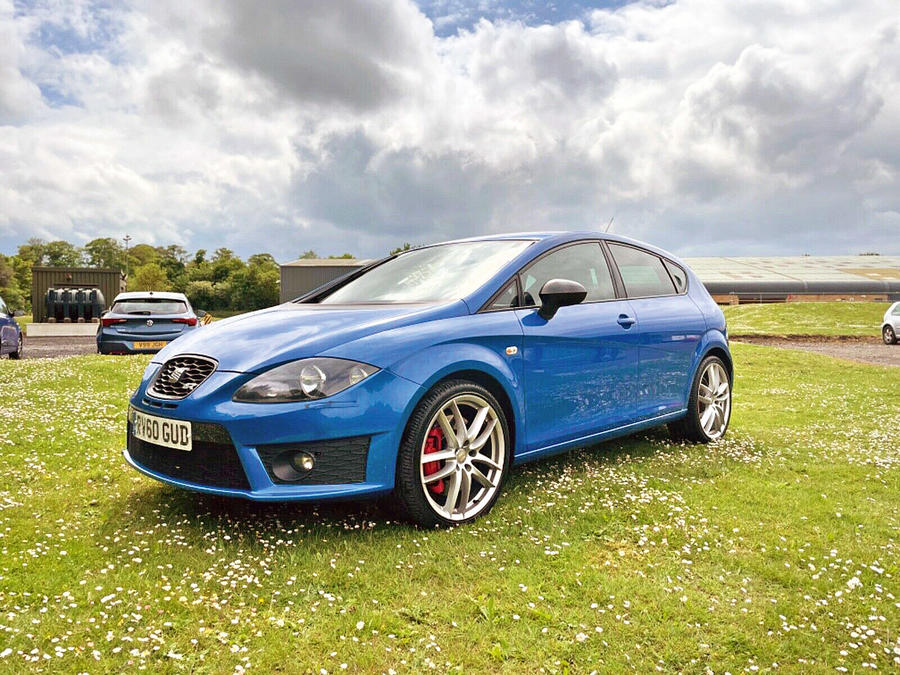 Seat Leon Cupra R £7300: This sizzling Seat has clearly been well loved. The cool and competent Leon Cupra R came with 261bhp, but this breathed-on example pushes that to nearer 310bhp. It should go well, then, and its Milltek exhaust will provide a suitably fruity soundtrack. 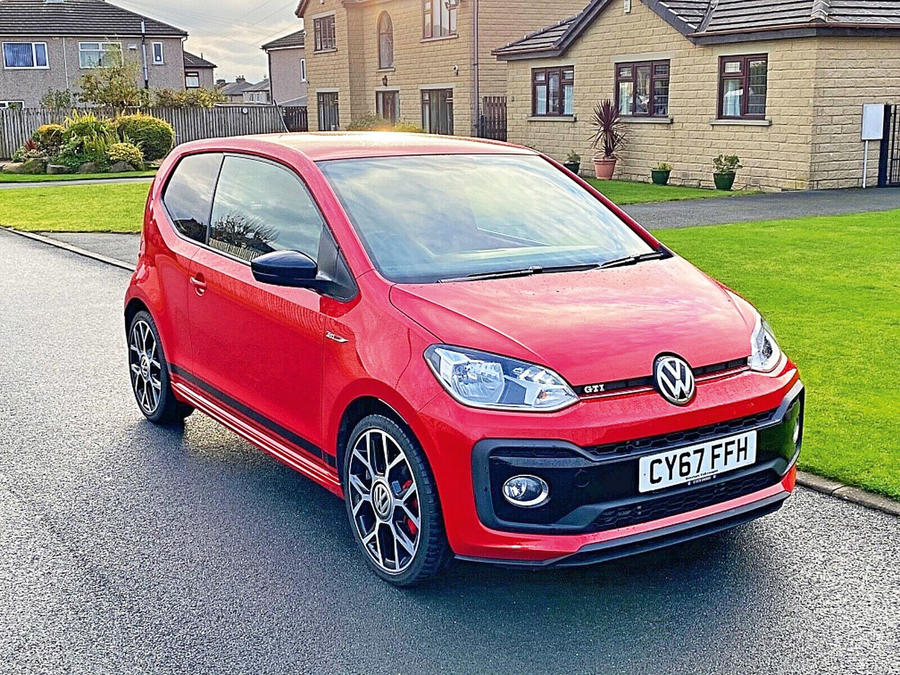 Volkswagen Up GTI 3dr £8495: The smallest GTI model is an excellent proposition for an accessible dose of speed on a budget. It’s a seller’s market, but £8495 for a 2018 car is half what you need for a new one. Its 0-62mph time of 8.8sec feels rapid and its economy will be decent, too. 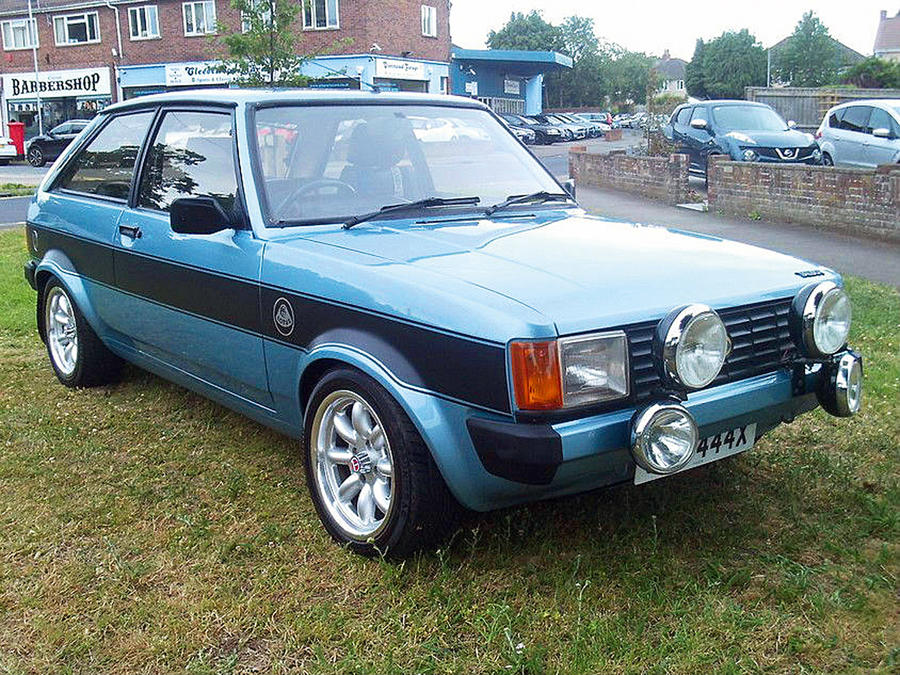 Talbot Sunbeam Lotus £27,995: If you fancy something a little more analogue, this 1982 rally refugee will keep all your limbs busy on a technical back road. It has had a full engine rebuild and some light chassis modifications but looks pleasingly period correct and gravel ready. 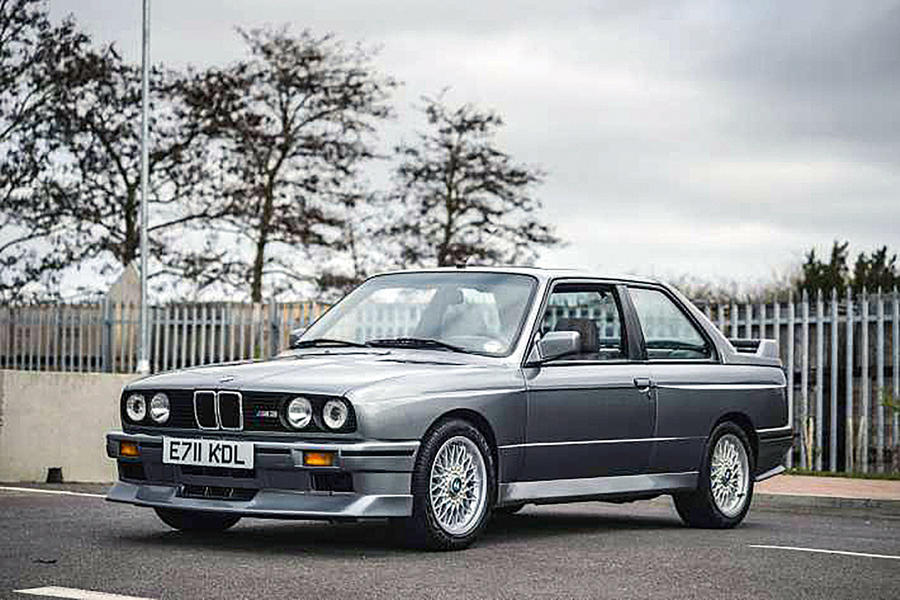 BMW M3 Evolution 2: Widely hailed as one of the most desirable and capable performance cars of its era, the original (E30) BMW M3 is quickly becoming a collectors-only proposition, so now is the time to bite. The M3 Evolution 2 received an increase in power to 217bhp, a new spoiler and bespoke larger (16in) wheels. It’s no wonder that this particular model is so coveted when you learn that just 500 were made. This 1988 example isn’t in perfect condition (it has had a new gearbox and needs minor corrosion tackled underneath) yet sold for £55,000 with just over 100,000 miles on the clock. Fewer than 1000 of those miles were driven in the past 15 years. 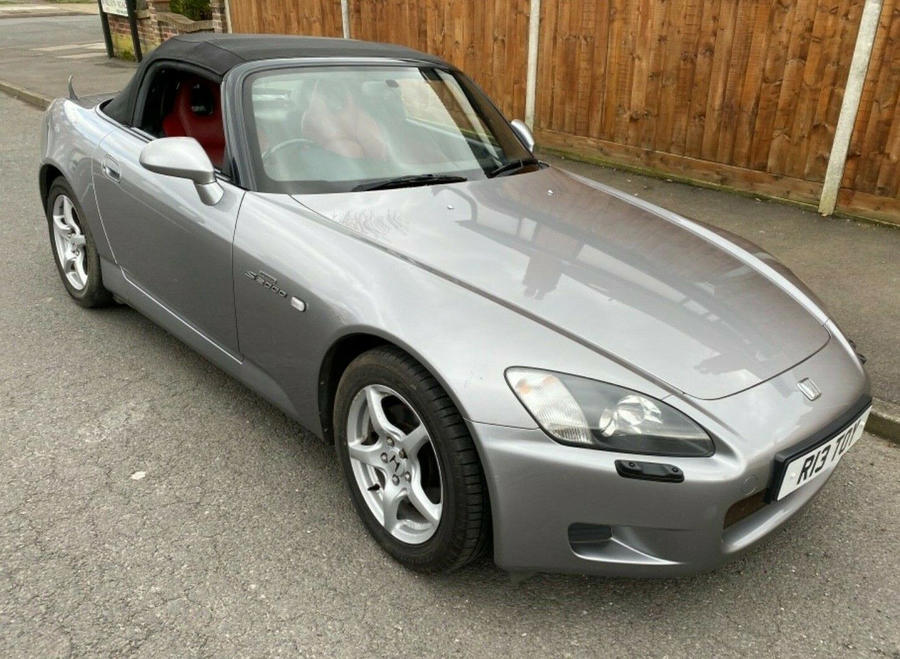 Honda S2000 £7350: It’s good to see a car like the Honda S2000 roadster receive the love that it deserves from its previous owner. That appreciation shows with 105,000 miles clocked on this model, and there’s no doubt that the S2000 would be an ideal top-down cruiser for the warm days ahead. It’s 20 years old, of course, so key things to check include the clutch and a gearbox overhaul might be required, but several examples we found for sale have been regularly serviced. The S2000’s 2.0-litre four-cylinder VTEC engine was built to last in traditional Honda style, so drivers should still be able to take advantage of some 240bhp to this day. 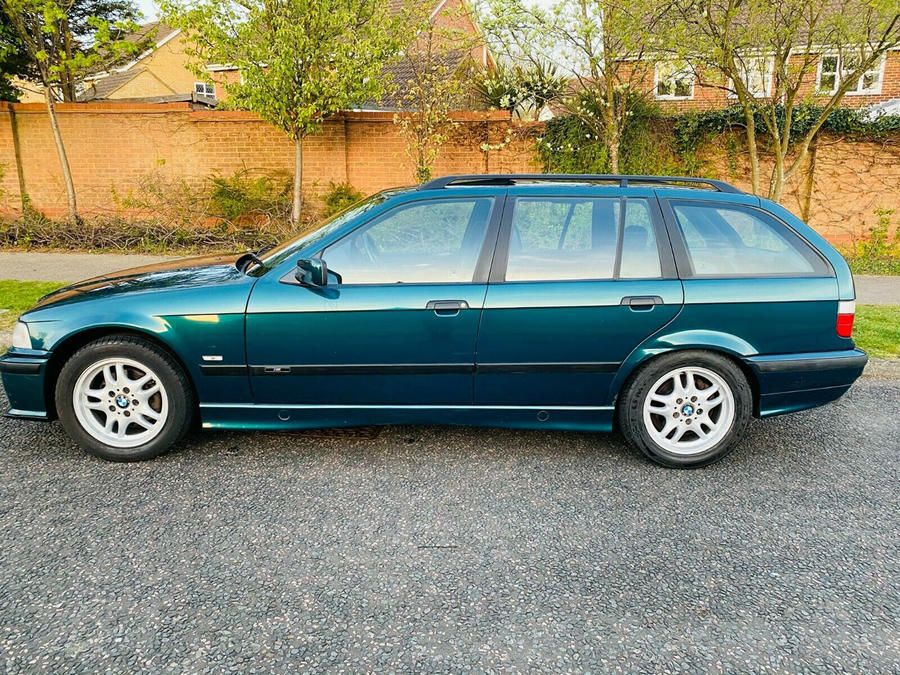 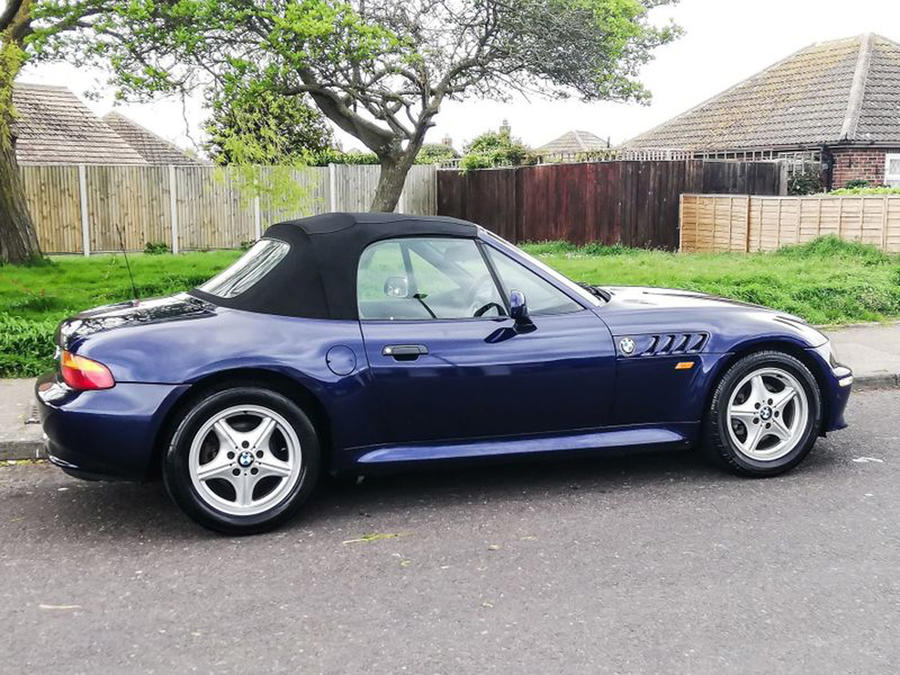 Felix Page: Yes, I have veered from the brief a tad. Properly solid E36-generation 3 Series are rarer than Monaco Grand Prix overtakes, but you can take off your welding mask, James, because I think you would get away with a replacement wheel arch (or two) and some touch-up paint here. It’s worth it for the Boston Green paint and creamy 2.8-litre straight six, surely?

Max Adams: It’s funny that we should both pick 2.8-litre BMWs, but I’m afraid mine is much more of a classic in the making. Just look at this distinctive roadster and tell me you aren’t seduced. Not possible. Also, there’s no rot to be found in its shapely form.

FP: I was about to mock your Z3’s notoriously leaky soft top, but then I read that it has been replaced. This is a tough battle, then, but as a passable impersonator of the never-born E36 M3 Touring, I think mine is better tipped for classic status.

MA: BMW has tried and failed with multiple M estates in the past. It’s not meant to be, much like the classic status of all non-M E36 variants. Meanwile, the Z3 has the benefit of film star status: James Bond once drove one, don’t you know.

FP: I think you will find that most car enthusiasts are ecstatic at the prospect of the new M3 Touring arriving next year. This E36 just has the advantage of being about a twentieth of the price.

MA: And having a fiftieth of the performance potential, no doubt.

Verdict: Why leave the family out? I’ll take the 328i Touring.

Buy them before we do: second-hand picks for 3 March

Buy them before we do: second-hand picks for 9 April

Buy them before we do: second-hand picks for 30 April

That's strange, there was a sporting variant of the new A1 with a 2 litre 6.5 second 0-60 time, what happened to that