Buy them before we do: second-hand picks for 17 July

The Volvo XC70 is solid, dependable and is a staple of the jacked-up, off-road estate market
Share
Open gallery
Close
Share story

If you asked us to name a carry-all that could do it all, we’d probably say Range Rover. However, if you don’t have the budget (who does these days?), then the next best thing would be the Volvo XC70. A mere few thousand pounds gets you a capacious estate with enough off-road chops for most people’s needs, plus it is supremely comfortable.

A few attempts have been made at cracking the jacked-up, off-road estate market, but it really is only Volvo and Audi that have persisted with it. The C5-generation Audi Allroad, a contemporary of this P2-gen XC70, was the more technically audacious. It had a trick air suspension system that afforded it greater ground clearance so was always the better of the two when venturing from the beaten path. However, as these two have aged, the complicated suspension of the Allroad has sent many of them to the scrapyard, while the simpler and more rugged XC70 soldiers on. 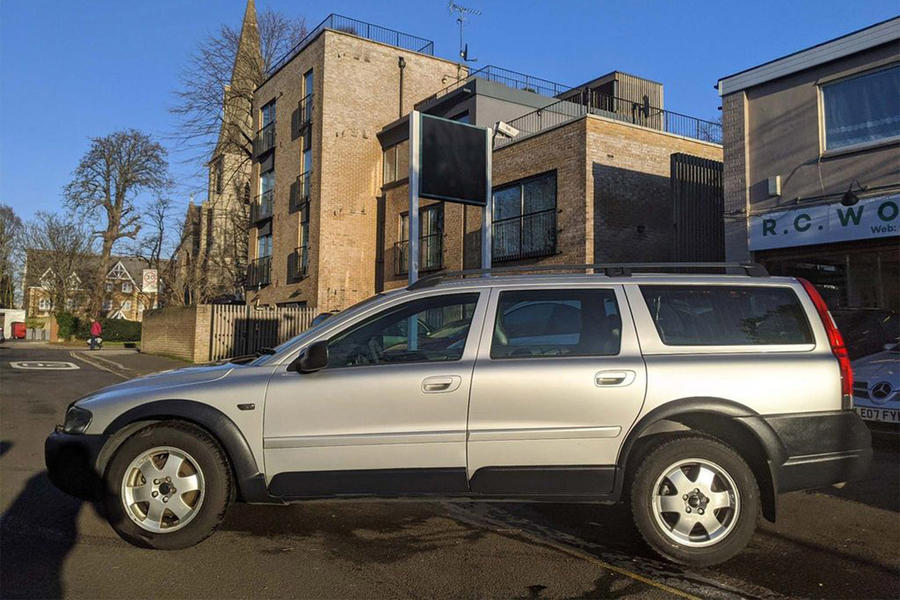 And you can definitely sense the solidity of it, from the heft required to shut the door to the chunkiness of its interior and the feeling of weight as you trundle down the road. This isn’t a car to be hustled, but it sits solidly on the motorway and leaves you in little doubt that it will keep you safe in a crash. Most even come with stability and traction control as standard to keep you out of trouble, along with six airbags and anti-whiplash protection should the worst happen.

What to look out for? A full service history – much like the one on this 90k-mile pre-facelift 2003 XC70 we found – is a must because refreshing the fluids needs to be done regularly to ensure reliability. 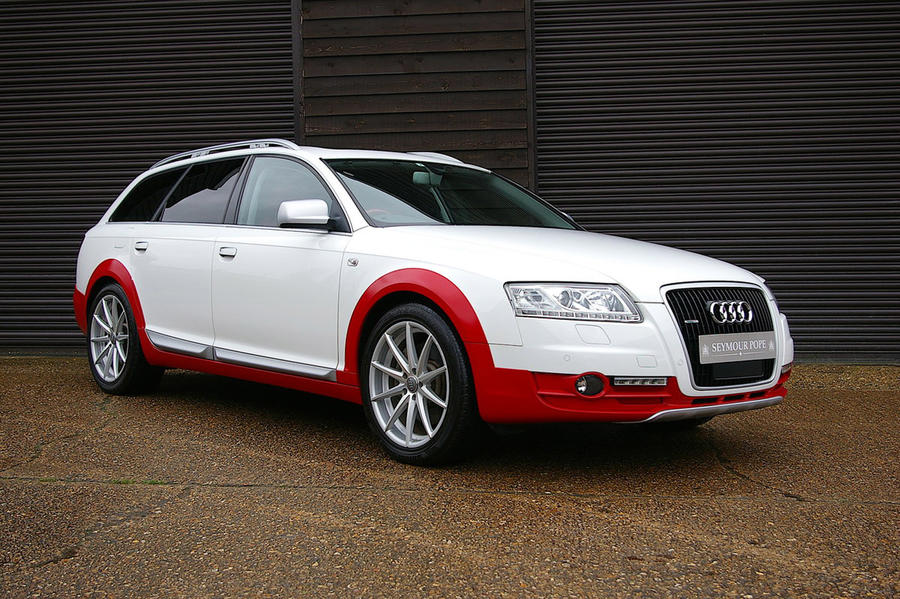 The Volvo XC70 is a rugged version of the V70 estate with mild off-road ability. It is well built and refined but otherwise fairly dull

Audi Allroad 4.2 V8, £14,940: You certainly wouldn’t lose this lurid red-and-white Allroad in a car park, and if you like the red on the outside, you’ll like the similar treatment inside. What’s more, this Japanese import with only 35,500 miles has a 4.2-litre petrol V8 with 345bhp. 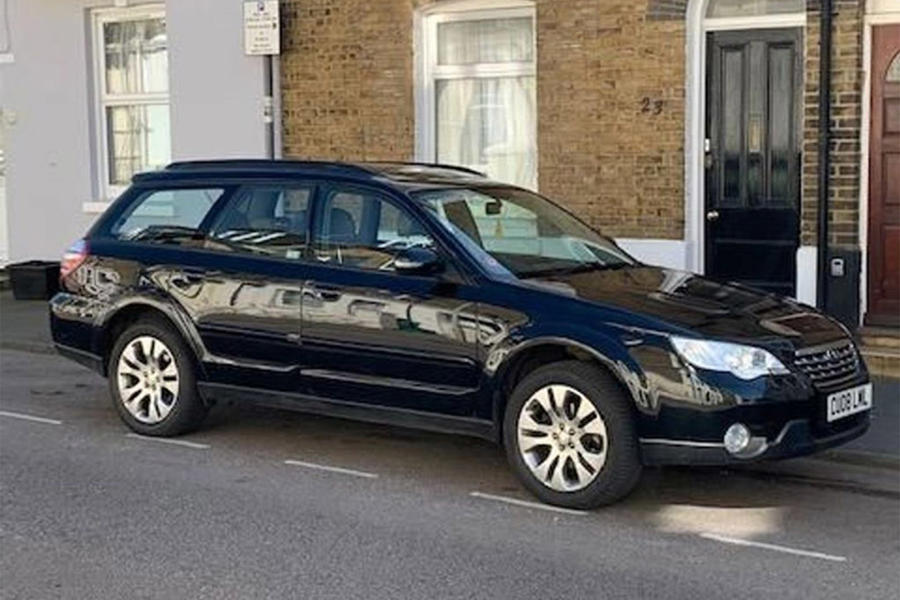 Subaru Outback, £5449: The Outback has permanent four-wheel drive – great for traction off road, terrible for fuel economy. The 3.0-litre flat six doesn’t exactly sip petrol, either, but at least it is punchy, and with just 80k miles on this one, it should have plenty of life left in it. 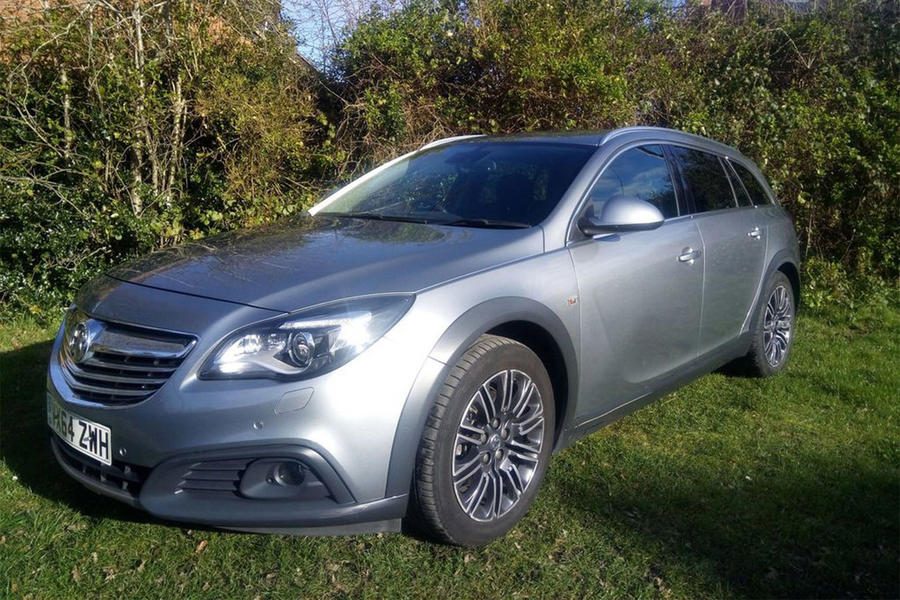 Vauxhall Insignia Country Tourer, £8750: One of the rarest Vauxhalls is the Country Tourer, a jacked-up four-wheel-drive estate originally aimed at more affluent buyers. To that end, it was offered with more powerful engines, such as this 49,500-mile one’s twin-turbo diesel with 192bhp. 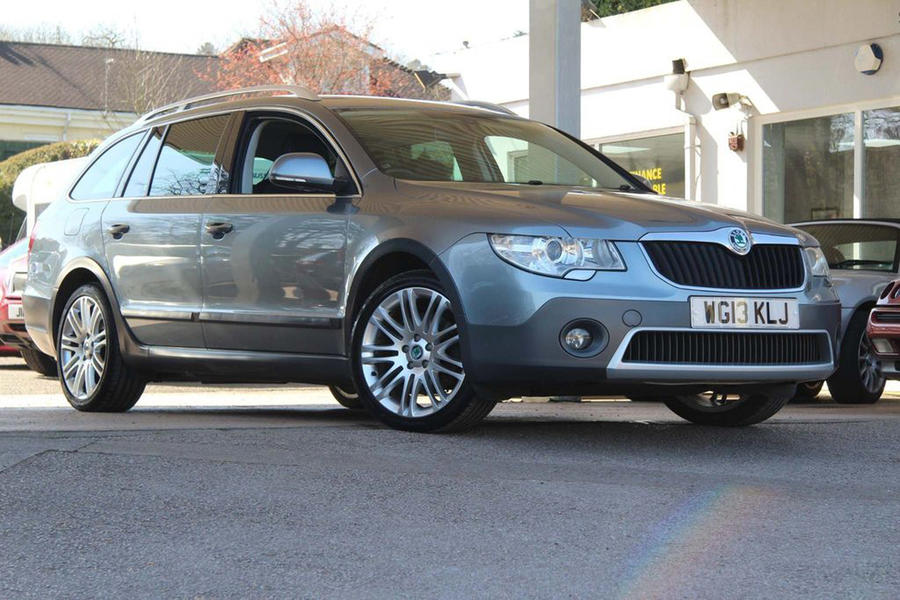 Skoda Superb Outdoor, £8295: This is a huge, practical estate with probably all the capabilities that most SUV buyers need. The 168bhp diesel engine may not be fast, but it should manage 40mpg or more. This particular Outdoor looks to be in exceptional shape for its 87k miles. 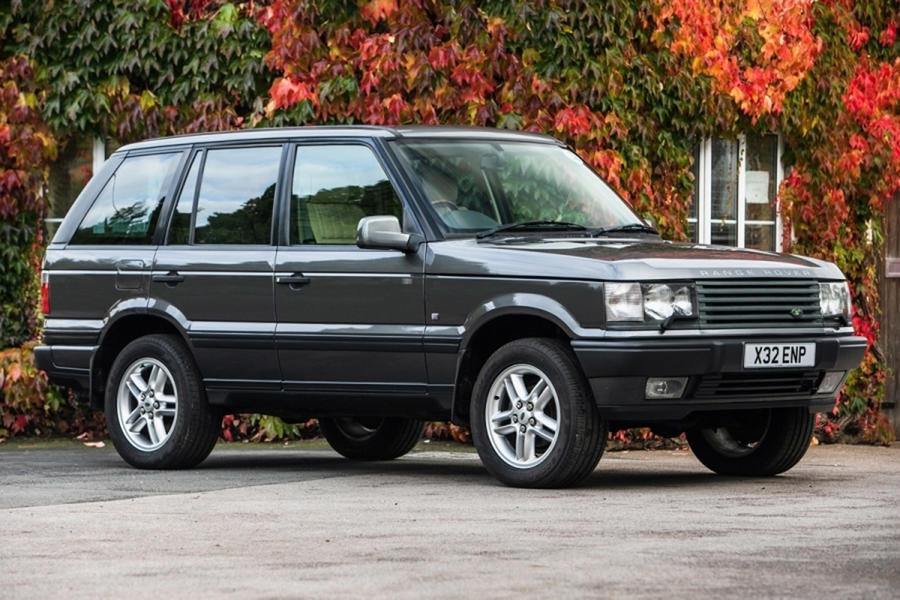 Range Rover (P38): There was a time when values for the P38-generation Range Rover were firmly entrenched in the dirt that this vehicle is famous for traversing over, but those days look to be over.

This late-2001 example with 44,000 miles on the clock went for £12,960 at a recent auction. It is in the potentially more reliable 4.0-litre V8 form, was being sold with an extensive service history and was said to be in show-quality condition. Its value was probably also helped along a little by the private registration plate that was included in the sale. 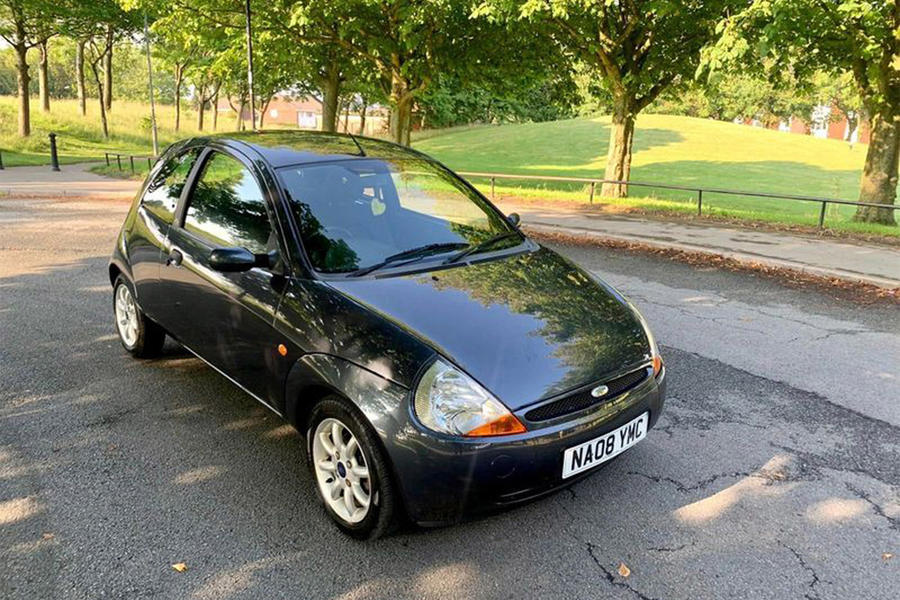 Ford Ka, £1495: The first-generation Ford Ka caused quite a stir when it arrived in 1996 – far more so than any other small car at the time. Its oddball styling turned a few heads initially but soon became widely accepted and, in fact, is better than that of its forgettable successor. Rust is the major enemy of Kas, but this late 2008 example, with only one owner and 26k miles, should be fine and is a relative steal at less than £1500. 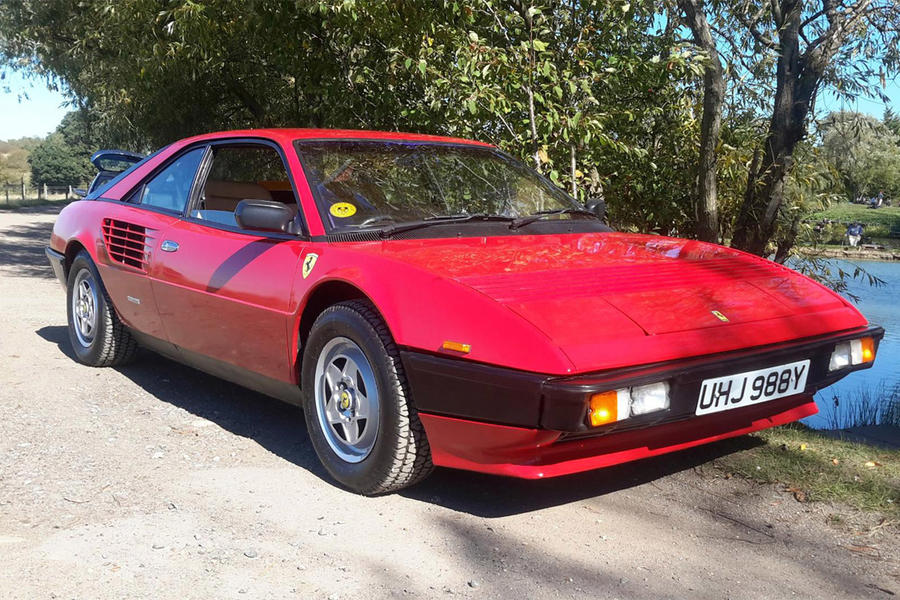 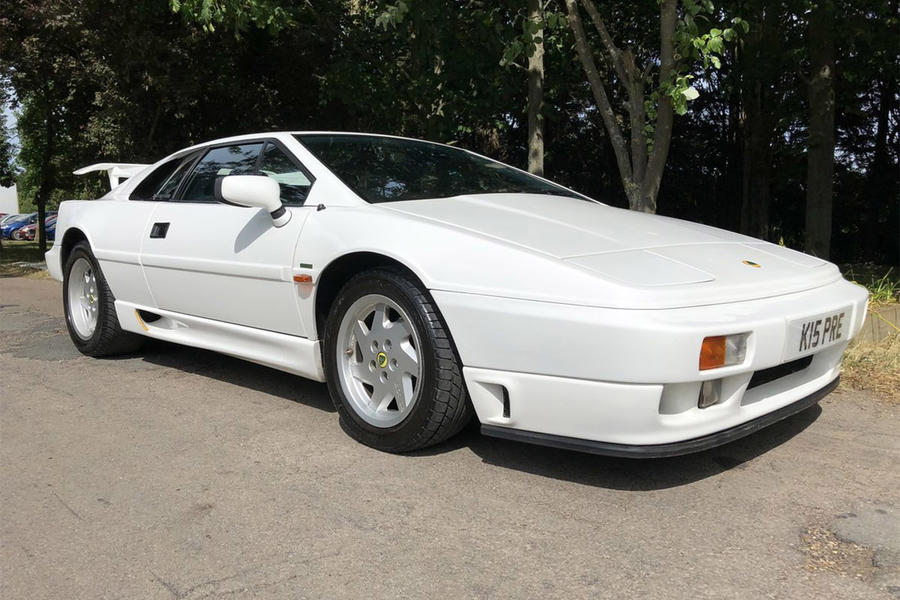 Mark Pearson: Okay, don’t say it. Don’t even begin to wang on with all that old rubbish about the Mondial not being fit to wear the prancing horse. The Mondial, sir, is a highly desirable and beautifully balanced mid-engined Ferrari with a trick V8 that sings and a chassis that’s a delight. Some actually thought it sweeter in the ride and handling department than the contemporary two-seaters. This well-kept 1983 one is a bargain, too – a Ferrari for under £30k. What you got, Max?

Max Adams: Why have you gone on the defensive, Mark? You’re not embarrassed by your Mondial, are you? I’m very pleased with my wedgy Lotus Esprit that’s newer, lighter and more powerful than this ‘prancing horse’. Plus, the 1993 SE Turbo I’ve chosen is charge-cooled and features an overboost function that can help spirit my Esprit to 60mph in 4.9sec. Can you match that, Mr Pearson?

MP: The race is not to the swift, Max, nor the battle to the glassfibre car. And I doubt if your Hethel horror will make it to 60mph without breaking down, to be honest.

MA: First, this is about finding a supercar, so speed is of great importance. Second, stones and glass houses and all that. I can’t imagine a 37-year-old Ferrari will be trouble-free.

MP: I do believe you’re jealous! What a thing. I think we’ll have to let James ‘Enzo’ Ruppert decide…

Ferrari Mondial: does it deserve its bad reputation?

.... the Ferrari 308 GT4 that was described as having sweeter handling than the 308 GTB/GTS - Not the Mondial.

The Mondial was basically noted as having acceptable handling rather than exceptional, and was noted as having slightly odd proportions, as Pininifarina had to raise the roof height, to accommodate the rear passengers, whilst maintaining the overall design.

Most motoring journalists agreed that the Mondial Cabriolet looked a lot better, because, with the top down, the high roof was gone.

Does an endorsement in Autocar mean an immediate price increase?

I looked on Autotrader to see if they had any Ka Zetec models for sale, just as a second car. Lo and behold there was one which clearly had £1995 on its screen, but had lept to £2495, presumably as a post-lockdown special offer, now that we're getting out more!!