BACK TO ALL NEWS
Currently reading: 2016 Audi A4 Allroad - latest spy pictures
UP NEXT
How the Bugatti Chiron became the first 300mph road car

The new Audi A4 Allroad has been spotted undergoing final testing in southern Europe prior to its planned unveiling in the first half of next year, with the off-road inspired A4 acting as an upmarket rival to the likes of the Seat Leon X-Perience, Volkswagen Golf Alltrack and Volvo V60 Cross Country.

While the fifth-generation A4 saloon and Avant are already on sale in the UK, Audi confirmed from the outset that a successor to the current Allroad would join the range soon after launch.

Spy pictures have revealed that the new Allroad will feature body cladding around its lower edges and a raised ride height. The previous A4 Allroad was raised by 37mm over the standard A4 Avant, and the new model is likely to be raised by a similar amount. Its track is also likely to be widened to counteract the car's higher centre of gravity.

The A4 Allroad should offer the same interior dimensions as the regular Avant, meaning 505 litres of storage space with the rear seats up, rising to 1510 litres with them folded down. The cabin architecture, trim and options list will be taken wholesale from the A4 saloon.

Power will be come from the regular A4's range of four-cylinder petrol and diesel engines, as well as two V6 diesels. The entry-level option will be a 148bhp petrol, which claimed to return 57.7mpg combined and emit 114g/km of CO2.

The big seller in this country is likely to be the model powered by Audi's 2.0-litre diesel engine, which gets an AdBlue exhaust injection system to comply with Euro 6 emissions regulations. It will be offered in two states of tune - 148bhp or 187bhp. In 148bhp form, the 2.0-litre diesel is capable of returning up to 74.3mpg with CO2 emissions of 99g/km. An economy-tuned A4 Allroad Ultra model will also be offered.

Transmission options will include a standard six-speed manual or optional seven-speed S tronic dual-clutch automatic. Unlike the other A4 models, quattro all-wheel drive will be standard on the Allroad.

Prices for the 2015 Audi A4 Allroad have yet to be revealed, but the car typically attracts a £5000 premium over the equivalent A4 saloon. The current A4 Allroad starts at £32,765. 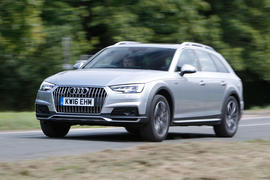 The Audi A4 Allroad has all the benefits of an A4 Avant, with none of the drawbacks of a full SUV. It makes a pretty convincing case for itself.