BACK TO ALL NEWS
Currently reading: Volkswagen to put Microbus-inspired ID Buzz electric car into production
UP NEXT
Lamborghini confirms LMDh entry for 2024

Retro-styled electric MPV, due to go on sale in 2022, will be capable of autonomous driving
Open gallery
Close

Volkswagen will put the ID Buzz concept – an all-electric Microbus-inspired MPV capable of autonomous driving – into production, with the car due to go on sale in 2022.

The machine was first displayed at the Detroit motor show in January, and Volkswagen has now decided to launch a production version in Europe, the USA and China following strong public reaction. The decision was confirmed at the Pebble Beach Concours d'Elegance last weekend.

First drive: behind the wheel of the ID Buzz concept

Speaking at the Pebble Beach Concours d’Elegance in California, Volkswagen CEO Dr Herbert Diess said: “After the presentations at the global motor shows, we received a large number of letters and emails from customers who said, 'please build this car'.

”The Microbus has long been part of the California lifestyle. Now we're bringing it back by reinventing it as an electric vehicle." 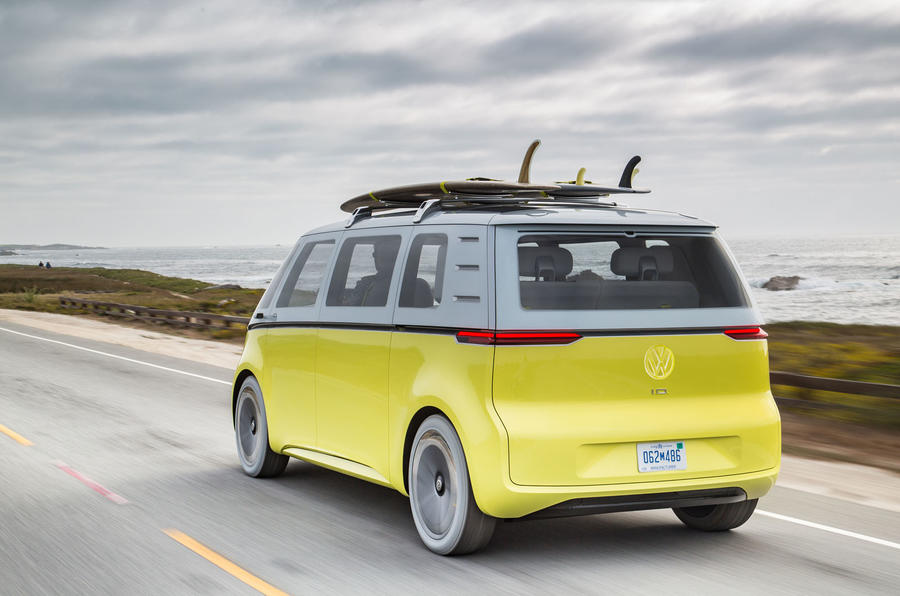 While the styling of the ID Buzz evokes the legendary Type 2 van, first launched in 1949, the machine is built around the latest technology on Volkswagen’s new all-electric architecture. It will also feature Level 3 autonomous driving capabilities, meaning it will be able to drive itself with human supervision.

The all-wheel-drive concept version is powered by 150kW two electric motors, with one in the nose section and the other by the rear axle, giving a total output of 369bhp. Torque is distributed between the two motors through an ‘electric propshaft’, and it can hit 62mph from rest in less than five seconds. Top speed is limited to 99mph.

The ID Buzz has a battery charge capacity of 111 kWh, giving a range of around 270 miles. The batteries are built into the floor to maximise interior space. Volkswagen says the ID Buzz’s architecture would also allow it to be fitted with a 268bhp rear-wheel-drive electric powertrain.

The ID Buzz has a wheelbase of 3300mm and a turning circle of 10 metres. The machine’s variable interior – which is 4922mm long - can seat up to eight people.

Volkswagen says the interior has been designed for maximum usability, with a rail-based flexible seating layout. The third row of seats can be converted into a bed, in a nod to its Microbus inspiration.

As with the Type 2 that inspired it, a commercial version, the ID Buzz Cargo, will be produced by Volkswagen.

Diess said: “The vehicle looks like a compact commercial van on the outside, even though it offers the generous interior space of a large SUV.”

The ID Buzz concept features a touch-sensitive steering wheel, with an augmented reality head-up display and centre console tablet intended to replace much of the traditional driving instrumentation. 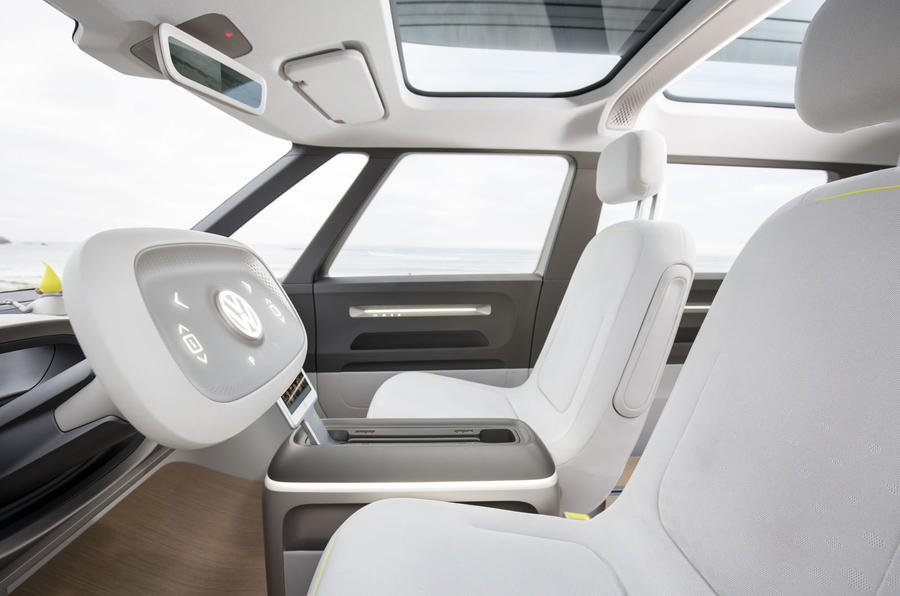 The future of the car: an Autocar guide (includes autonomous driving explainer)

The concept doesn’t feature rear-view mirrors, instead using external cameras whose images are displayed on an ‘e-Mirror’ screen in the traditional location of the rear-view mirror. Again, it is unclear how much of this technology will make it to production versions of the ID Buzz. 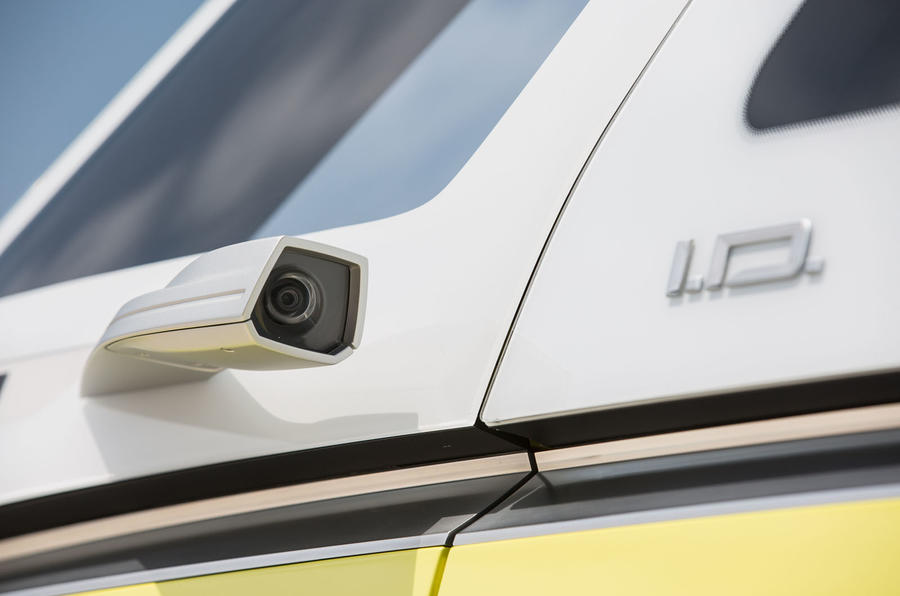 The ID Buzz will form part of Volkswagen’s ‘Together-Strategy 2025’ plan, which involves the firm investing £7.5 billion into developing more than 30 battery-powered models by 2025. The first new model from the firm will be the ID compact car. 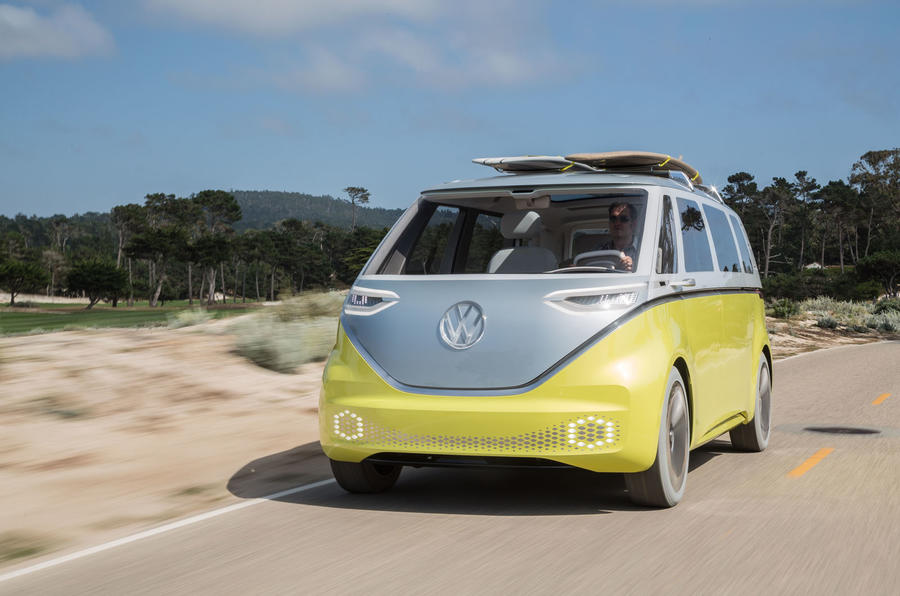 Opinion: Another Microbus concept? Why this one could work (from Jan 2017)

A well specced caravelle executive 4motion is around £80k, So £100,000 is my guess on the price of one of the autonomous, electric, vw executive microbus. That's if they ever build it, there's been several microbus concepts shown for about 15 years and vw still haven't put one into production.

I hope in the production version they retain the slim LED light clusters and all wheel drive.  If it has the sort of customisation options that Mini / Fiat 500 / DS3 have it would be so popular.  I know this isn't the usual sort of comment for Autocar but let's face it, it's not really going to set the world alight from a driving perspective.

As far as I know March ish 2018 I think the UK government is pulling the plug on the grant on the electric car. My guess is this is when the electric car sales collapse.
The price of this I estimate at £40k list. Compared to the normal Transporter price of circa £30k.
Sorry I won't bother.
View all comments (7)