BACK TO ALL NEWS
Currently reading: Volkswagen ID Buzz likely to make production
UP NEXT
New 2021 Toyota Camry brings styling and interior tweaks

Volkswagen's Microbus-inspired concept has the 'thumbs up' for production so far, but it needs a global green light first
Share
Close
Share story

Volkswagen is close to greenlighting its Microbus-inspired ID Buzz concept, with public reaction set to determine whether it goes into production.

"The concept has been well-received in the US and Europe," said design chief Klaus Bischoff, "but the missing link is China. From the business case point of view it’s quite an investment – it needs a global green light. In the meantime, it’s thumbs up."

Bischoff admitted that the design of the ID Buzz, which is the same length as a long-wheelbase Caravelle, is currently being worked on. "It’s more than a skin, and more than a show car," he added. "Maybe it will shrink a little, but inside it is much bigger."

The ID Buzz is the third Microbus concept, but the previous two never made production. "I've tried quite a bit to bring this [the Microbus] to life," Bischoff said. "This is the final temptation."

The Buzz will be followed by an electric SUV concept for the Shanghai motor show, followed by a saloon concept later this year. The SUV will look "non-aggressive but self-confident," according to Bischoff, while a "surprise" is promised for the saloon, which apparently prompted 'wows' from colleagues on seeing it for the first time. 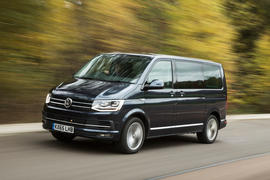 This is getting boring. Talk about trading on past glories...

How many more times will VWCV show a retro "bus" concept that doesn't currently stack up financially? It's been c. 15 years since the first one; it almost smacks of "forgive us our current sins; please don't forget we used to make appealing looking products a bit like this one!"
fadyady 9 March 2017

I really look forward to reading Volkswagen's electric car stories every day in this and other car magazines the world over until 2020 when they actually put one on the road.
bol 9 March 2017

I drive one every day...

fadyady wrote:
I really look forward to reading Volkswagen's electric car stories every day in this and other car magazines the world over until 2020 when they actually put one on the road.

Haven't we been here before,just what we need a novelty MPV, maybe it'll make production in South America