BACK TO ALL NEWS
Currently reading: New Mercedes-Benz EQC: UK pricing set for EV
UP NEXT
Testing the UK's newest circuit in a Porsche Cayenne Turbo GT

New battery-electric model will go on sale next year and take the fight to the Jaguar I-Pace and Audi E-tron, priced from £65,640
Open gallery
Close

Now available to pre-order, the five-seat electric SUV, the first dedicated electric Mercedes model to enter series production, will be powered by an 80kWh lithium ion battery, with a WLTP-certified range of 259 miles. Two electric motors deliver a combined 402bhp and 564lb ft to move the EQC’s 2425kg kerb weight.

A key rival to the Jaguar I-Pace, Tesla Model X and upcoming Audi E-tron quattro, the EQC will be offered with a choice of six trim levels at launch.

The entry-level EQC 400 4Matic Sport will start at £65,640 and feature the latest version of Mercedes’ MBUX infotainment system and a navigation system optimised to plot the fastest route depending on which type of charging points you want to use. It also comes with parking assist, a rear-view camera, blindspot monitors, LED headlights, heated front seats, 19in alloy wheels and ambient lighting featuring 64 colours.

There is also an AMG Line Premium Plus trim for £74,530 that adds a head-up display, 360deg camera, memory seats and extra MBUX functions.

Mercedes will also offer a £74,440 Edition 1 model, featuring the Sport equipment with extras including an electric sunroof, Burmester audio, special paint, leather upholstery and 20in wheels.

The most expensive model will be the limited-edition EQC Edition 1886, launched at this year's New York motor show. It will cost £79,260.

The EQC is based around a heavily modified version of the Mercedes GLC platform. It made its first public appearance post-reveal at the Paris motor show.

Stylistically, it leans heavily on the early Generation EQ concept of 2016. It retains the same basic shape and five-door layout of the earlier concept, albeit with altered detailing such as the front-end design. Autocar understands that the EQC achieves a drag coefficient of less than 0.30. 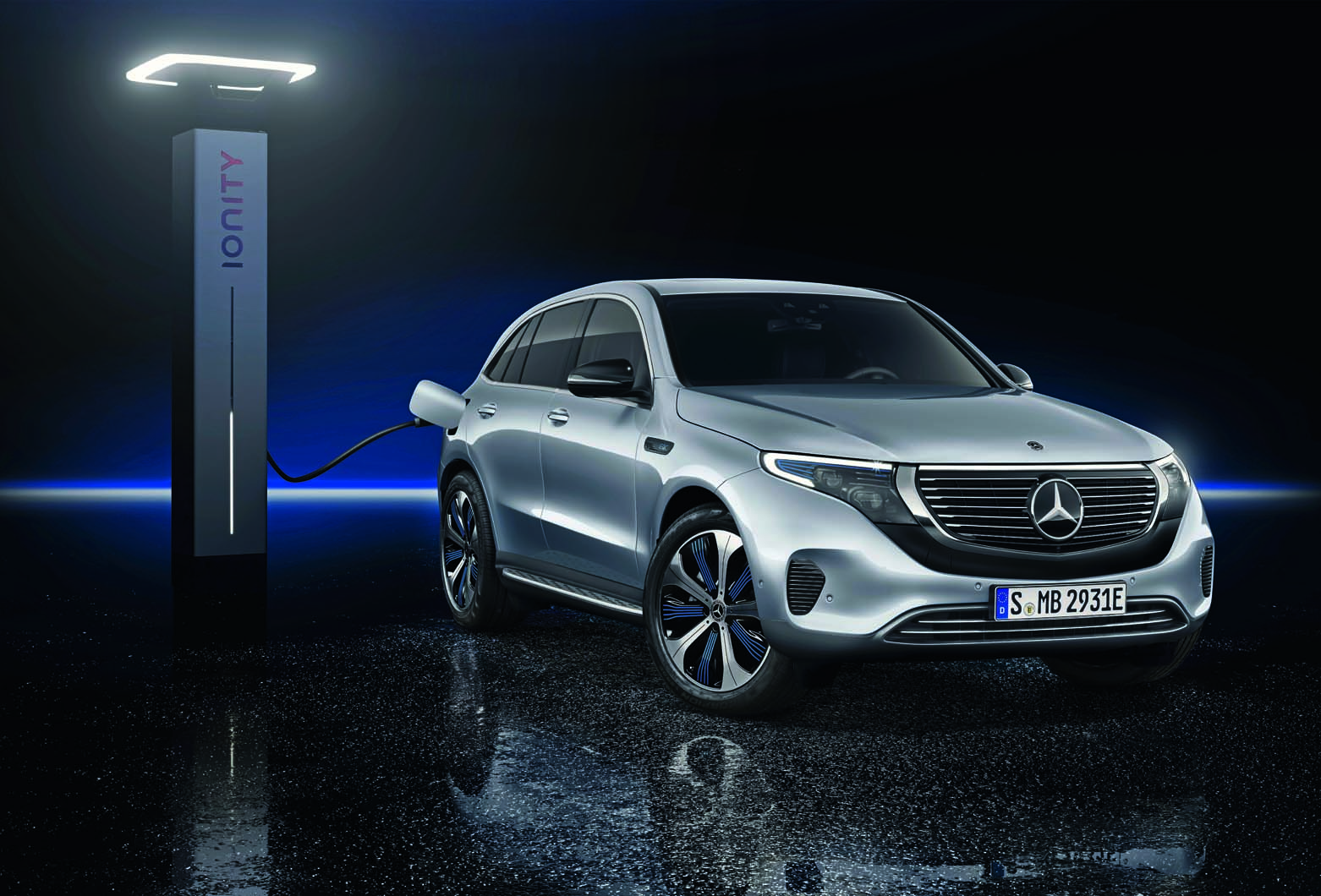 Inside, the new model uses an upgraded version of the GLC’s cabin, parts of which appear on the upcoming facelifted version of the mid-range SUV. These include a newly designed dashboard with a digital instrument and infotainment panel, reworked ventilation units and a new multi-function steering wheel featuring touchpads within the horizontal spokes.

With seating for five and 79 litres more luggage space than the GLC, at a claimed 500 litres, the EQC will count versatility as one of its strongest selling points. 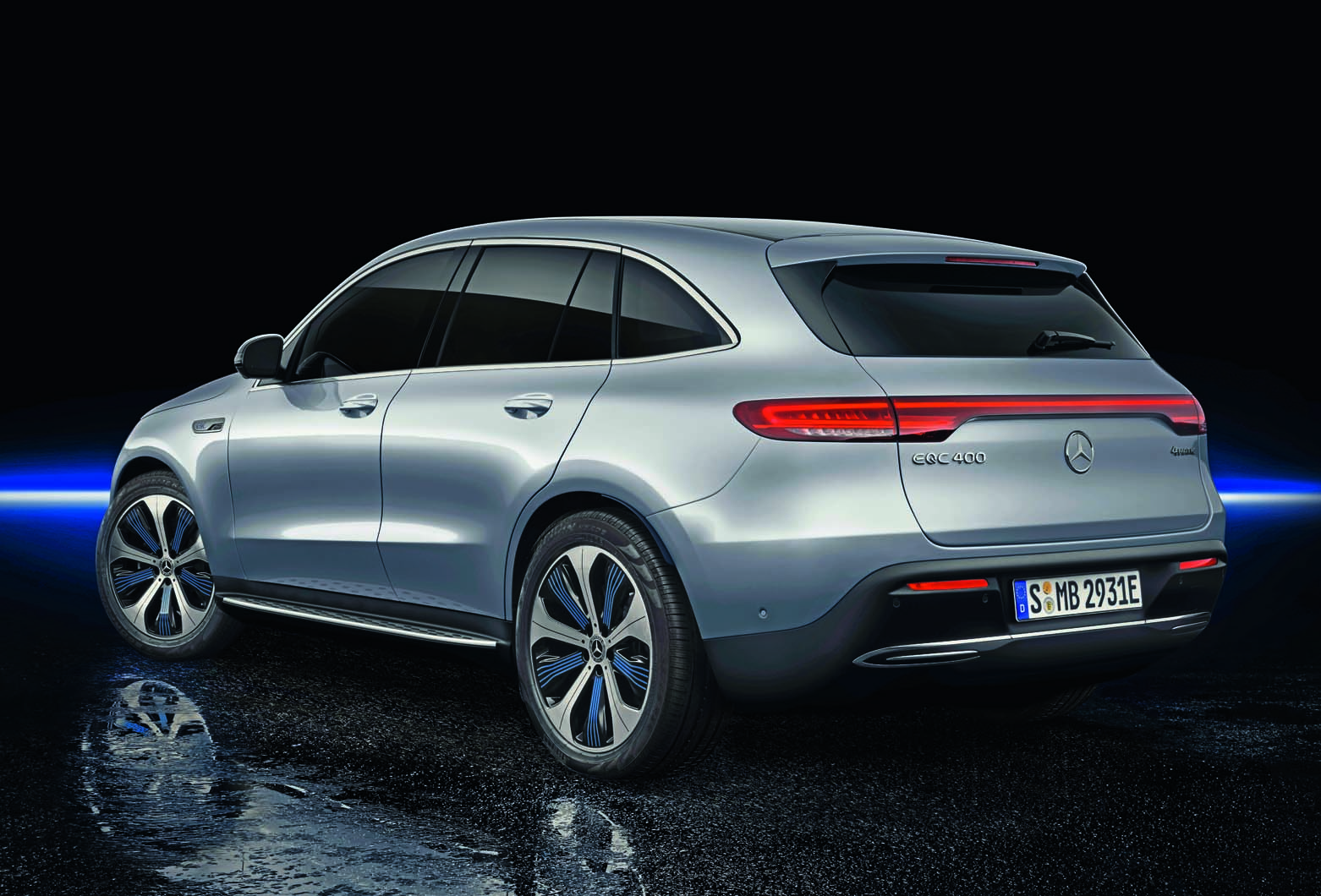 The EQC is powered by a newly developed electric powertrain that’ll be used across the Mercedes EQ range. Initially previewed in the Generation EQ concept, it consists of two electric motors – one powering the front wheels and another the rears – that enable four-wheel drive capability, depending on the driving mode.

Each of the EQC’s motors is configured differently: the front one is tuned for efficiency in the low to mid-load range, and the rear one is described as being more performance orientated, with a greater emphasis on the mid to high-load range. Rubber subframe mounts for the motors endow the EQC with class-leading refinement, according to Mercedes. 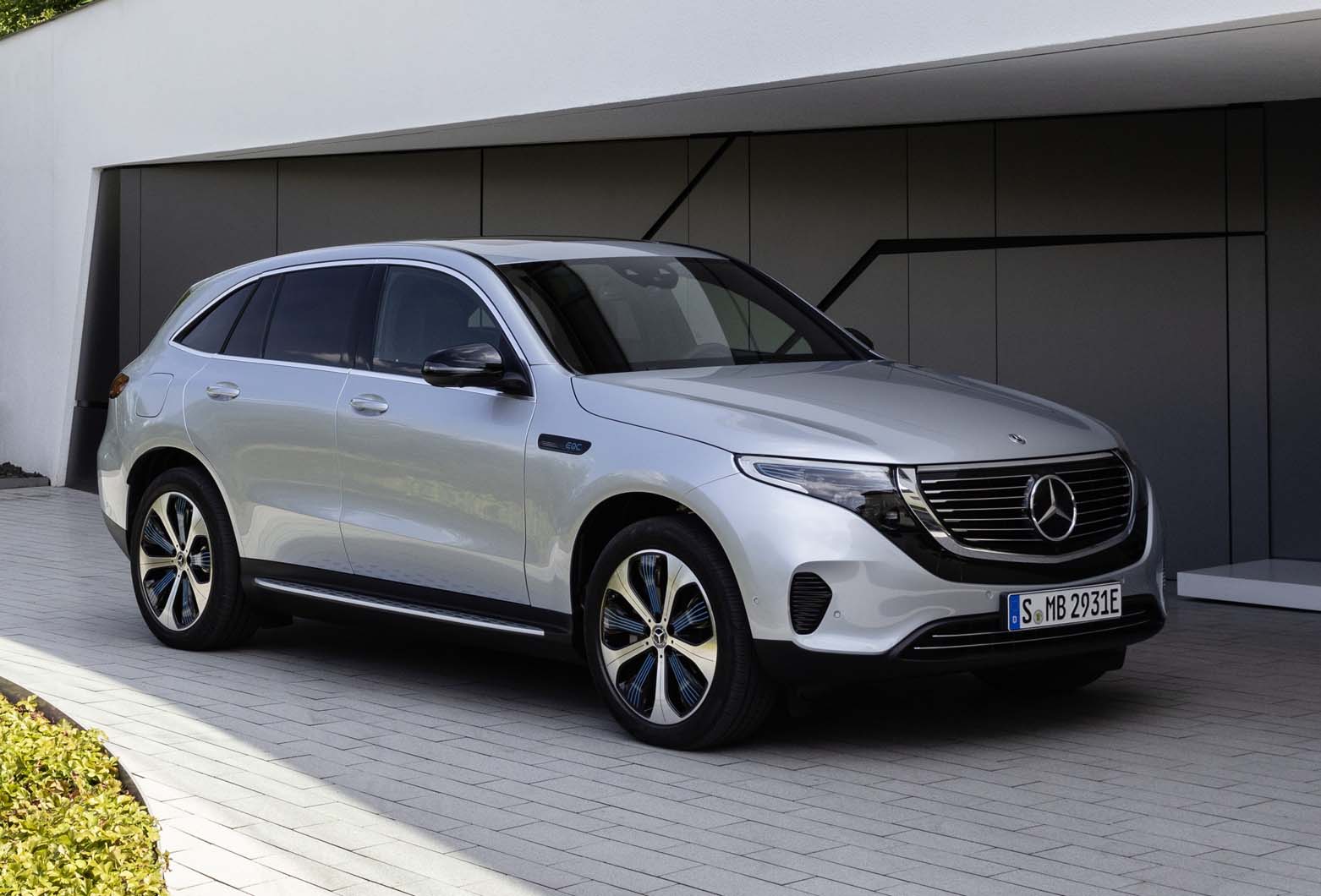 In Sport mode, the EQC will sprint from a standstill to 62mph in 5.1sec. Top speed is limited to 112mph. In a display of the car’s versatility, Mercedes also claims a towing capacity of 1800kg and a 515kg payload.

Energy to power the motors is supplied by an 80kWh battery. All up, the lithium ion unit weighs 650kg. With an official range of  259 miles on the WLTP cycle, the EQC can’t quite match the 292-mile range of the Jaguar I-Pace, which features a larger, 90kWh battery. That should translate to around 200 miles of real-world range.

A standard 7.4kW onboard charger enables AC charging via either regular mains or high-voltage public charging stations. Under DC charging, the EQC’s battery can be charged from 10% to 80% at up to 110kW in around 40 minutes.

There are no plans to offer different battery sizes on the EQC. However, Mercedes boss Dieter Zetsche said that in future, EQ models could be offered with a range of options. “Yes [we could do it] but not like in today’s vehicles with 15 variations. We will probably try to offer different price points, which would offer different mile ranges. But it is not as easy to do as an internal combustion engine equivalent.”

The EQC will be produced at Mercedes’ Bremen plant in Germany and a joint-venture factory in Beijing, China. UK examples will be made exclusively in Bremen.

Mercedes said it constructed more than 200 prototypes of the EQC in a programme claimed to have covered “several million kilometres across four continents”. 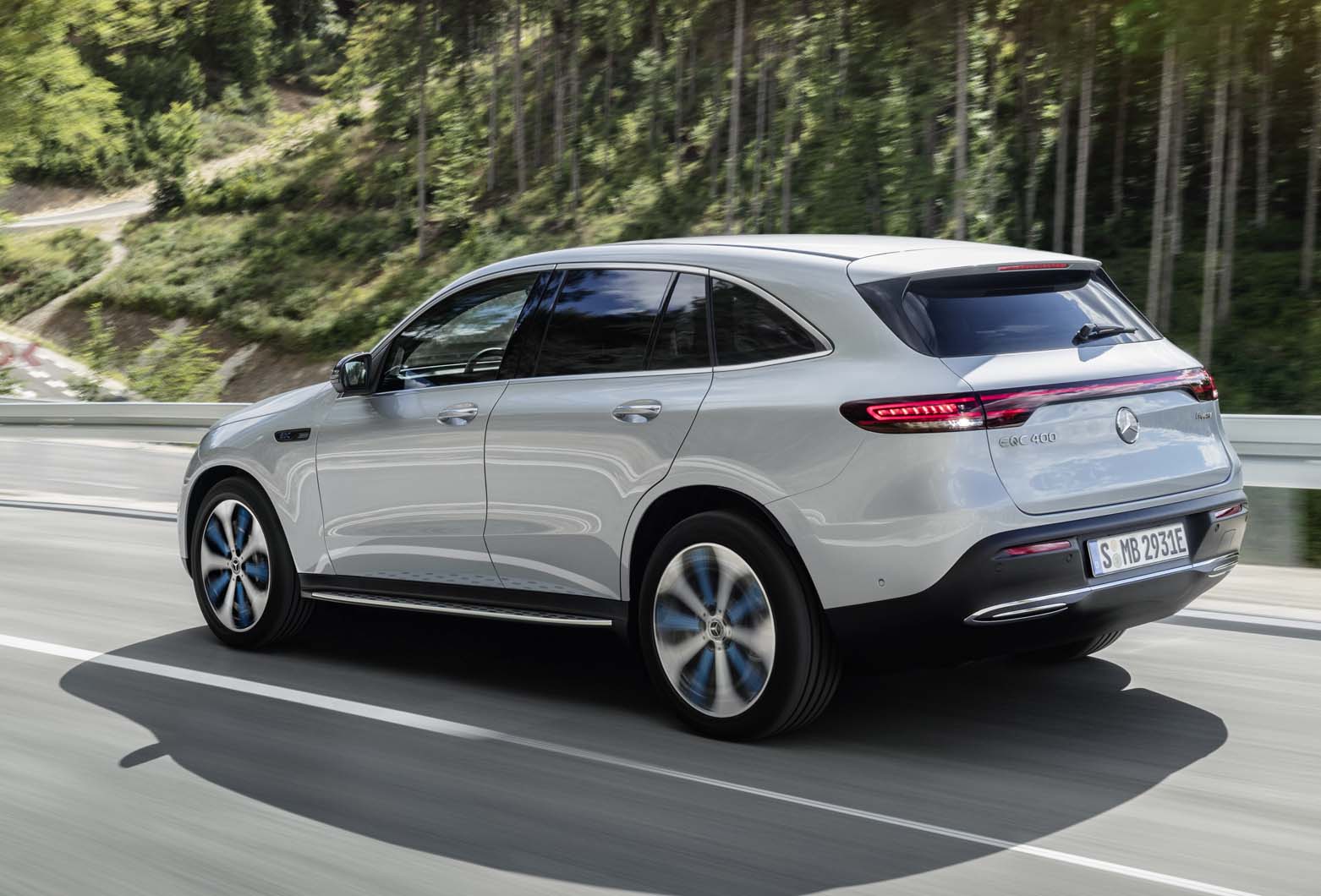 So it looks like Mercedes’ first committed stab at a proper EV will weigh more than a Tesla Model S and a Jaguar I-Pace – and, with 80kWh of battery capacity, may very well not offer quite as much real-world cruising range as either.

We’d be foolish to make any judgements about it on the basis of such preliminary information, or without knowing for sure exactly how Mercedes will be pricing the car, but that’s probably not the greatest of starts for it to have got off to.

I like the sound of the car’s motor configurations, though. It certainly makes sense to me to vary either the size of the motor at each axle, or its gearing, or both, in order to optimise performance and energy efficiency throughout the speed range.

And Mercedes’ claim is promising, too: that this motor strategy will boost the car’s handling dynamism, with the bigger and more powerful motor being at the rear, and perhaps only called upon when the car is in Sport mode or being driven under high load. 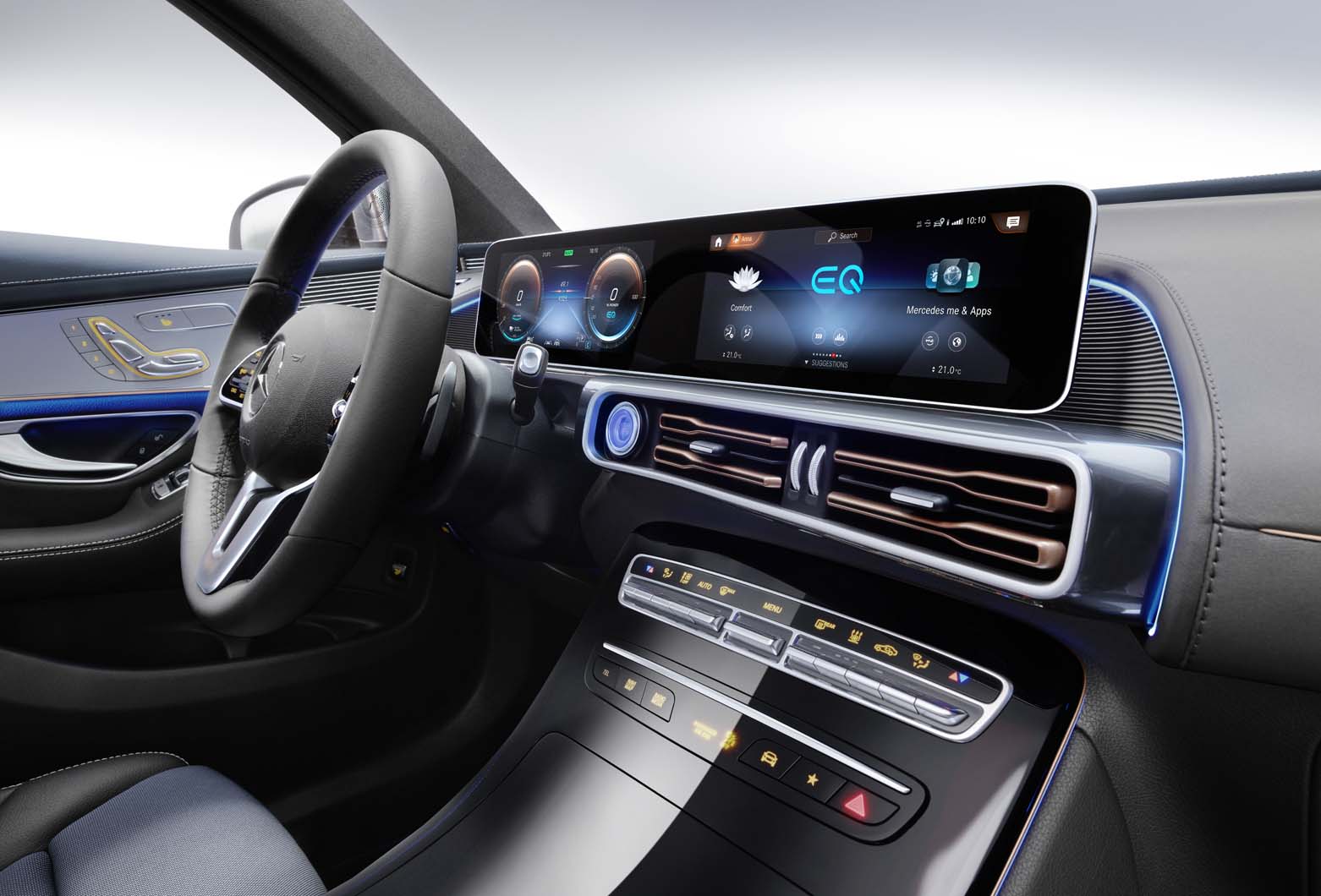 Mercedes EQ A electric hatchback previewed ahead of Frankfurt

There is a paucity of choice in finishes. Inside where are the lighter coloured leathers and linings.

The exterior also seems to be racing colours only, other than silver and white colours ...all look dour when grubby from road spray, previous cars have much extended choice.

Spoilt by sticking to amg theme only. Where are the comfort luxury elements.

For the cost there has to be a wider option range.

MB comments ...their decision is based on extensive research...

We spend a lot of time inside a car so let's have a cheerful calming colourway...breeds better driving ..

It costs as much as a GLC63 or a base GLE, and therefore way beyond my price range. Anyone planning on making a compelling electric car with decent range under £50k?

It costs as much as a GLC63 or a base GLE, and therefore way beyond my price range. Anyone planning on making a compelling electric car with decent range under £50k?

This trim level is fairly annoying on a combustion car (it devalues the AMG brand and leads to a hundreds of ebay AMG badges stuck hopefully on the back of C220 CDIs) but on an EV? It's meaningless.

AMG is all about thundering V8s and lots of noise, nothing to add to a new EV range you'd have thought.  That said, this really is a willfully dull device, I've seen bars of soap with more elan....

To think if Daimler hadn't bottled out of the Dual Mode collaboration with BMW and GM, they could have had a strong hybrid in every model range and if they'd carried on with the work started on the eSLS electric drive, they wouldn't be trying to sell this short range, slow and overweight device to their customers.  Glad I bought a Tesla after my E63!