BACK TO ALL NEWS
Currently reading: Mercedes EQ concept - first ride
UP NEXT
Hidden gems: A peak behind the scenes at Beaulieu

The EQ concept acts as a rolling blueprint for the first truly dedicated series production Mercedes electric model, a high-riding rival to the Audi E-tron, Jaguar I-Pace and Tesla Model X. The production version of this concept will be called EQ C when it goes on sale in the UK in 2019. 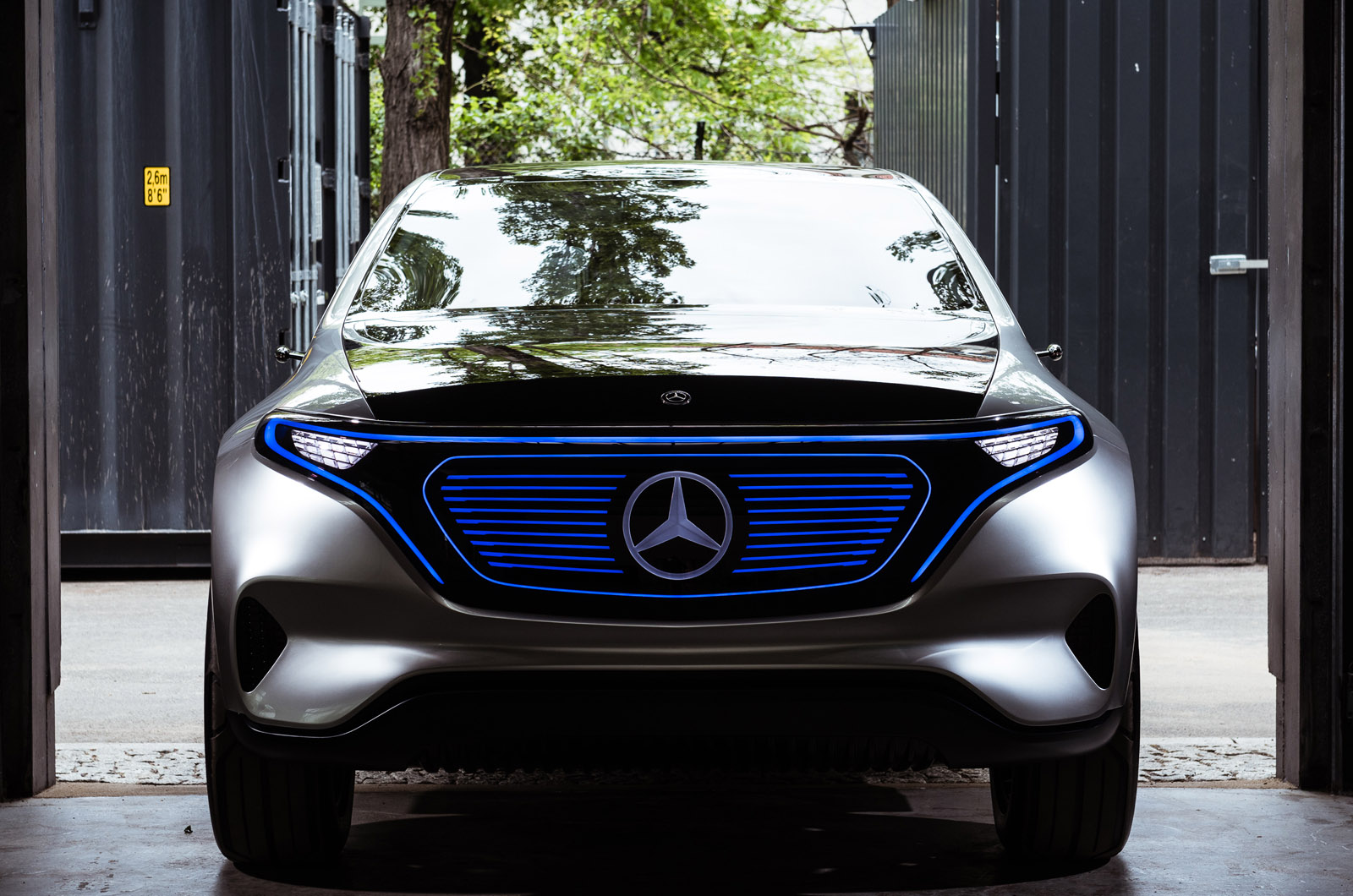 Its platform structure and battery-powered driveline are set to be used in up to four uniquely styled electric models by the middle of the next decade, ranging from the EQ A, through the EQ C and EQ E, up to an EQ S flagship.

We had a passenger in the EQ concept and can report it is a very different proposition to the company’s sole electric car to date, the B-Class Electric Drive.

Perhaps the most remarkable thing about the new electric car concept is how unremarkable it looks out on the street. While rival car makers are pushing futuristic appearances for their battery-powered offerings, Mercedes seems content for the first of its new generation of electric vehicles to possess close stylistic ties with its current line-up of combustion engine models.

To help boost the aerodynamic efficiency and create a “seamless aesthetic”, as described by Thomas Zaelze from the company’s advanced design studio, Mercedes’ designers have resorted to a number of typical conceptual air-cheating measures. 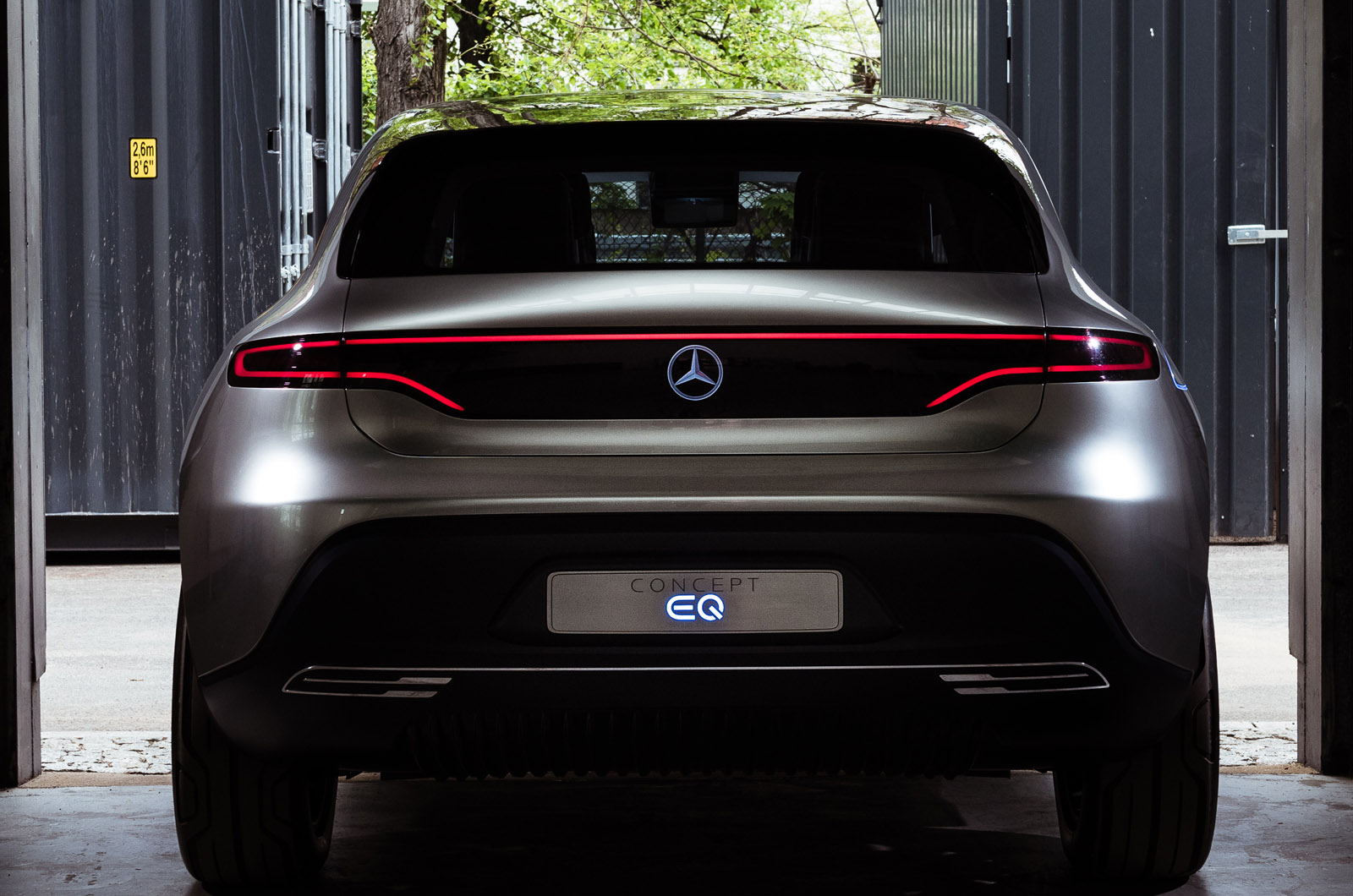 These include the concealment of the windscreen wipers beneath a flap within the trailing edge of the bonnet, the employment of digital cameras in place of conventional exterior mirrors, the deletion of traditional door handles in favour of a touch-sensitive opening function integrated into the B-pillars and the fitment of 21in wheels with an aerodynamically optimised spoke design.

Dimensionally, the EQ concept falls halfway between the existing GLC and GLE with a length of 4730mm, width of 1950mm and height of 1560mm. The basis for the upcoming electric-powered SUV is a newly developed platform constructed from a combination of hot-formed high-strength steel and aluminium.

Although its first ever large-scale production electric car is just two years away from entering showrooms, Mercedes remains tightlipped on the driveline that is planned to power it. It will say, however, that it has two electric motors – one up front powering the front wheels and another at the rear sending powering the rear wheels.

Together, the two motors are set to deliver more than 400bhp. To put this into perspective, the twin-turbocharged 3.0-litre V6 petrol engine-powered Mercedes-AMG GLC 43 Coupé kicks out 362bhp, while the turbocharged 2.0-litre four-cylinder petrol engine and electric motor of the hybrid-powered GLC 350e produces 316bhp. 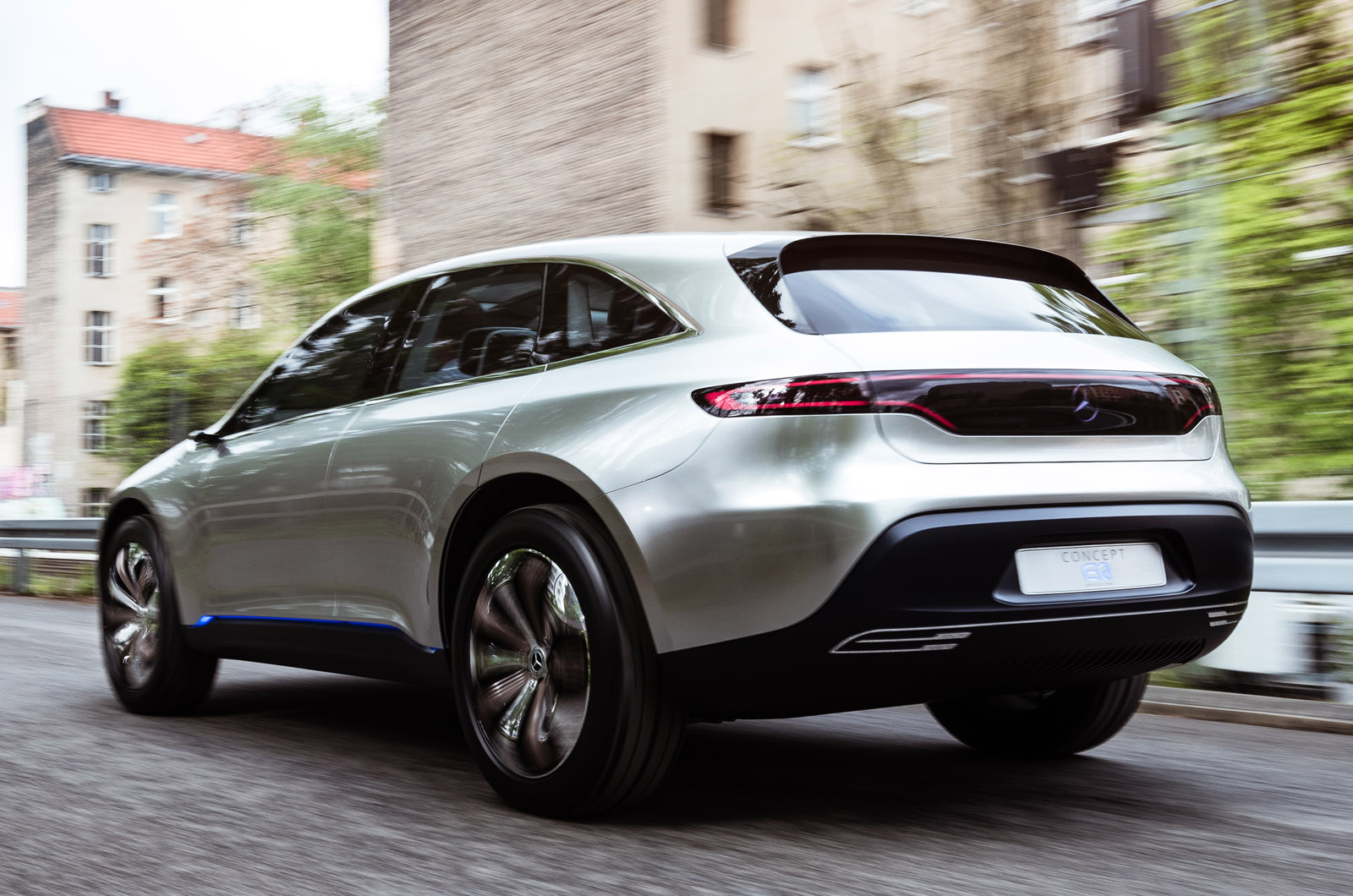 Depending on the drive mode, the EQ C’s driveline can send 100% of drive to the front or rear wheels thanks to a wiring loom that acts as an electronic propeller shaft to connect the two motors and endow the car with full four-wheel drive capability.

Around town at lower speeds, it is programmed to run mainly in front-wheel drive mode, then automatically switches to four-wheel drive for added handling security at higher speeds.

Although the weight of the large lithium ion battery is likely to make the EQ C tip the scales at over 2000kg, straight-line performance won’t be a problem. Engineers we spoke to in Berlin last week promised a 0-62mph time of less than 5.0sec, indicating the EQ C will be as quick as the GLC 43 out of the blocks. The claimed range is said to be over 310 miles on a single charge.

Climbing into the passenger seat, we get a first-hand look at the striking interior design that is set to grace Mercedes’ new range of electric vehicles. Drawing on the same aesthetic used for the exterior, it has a low-set dashboard with a prominent instrument and infotainment display that's similar in shape and size to that of the latest Mercedes-Benz E-Class. 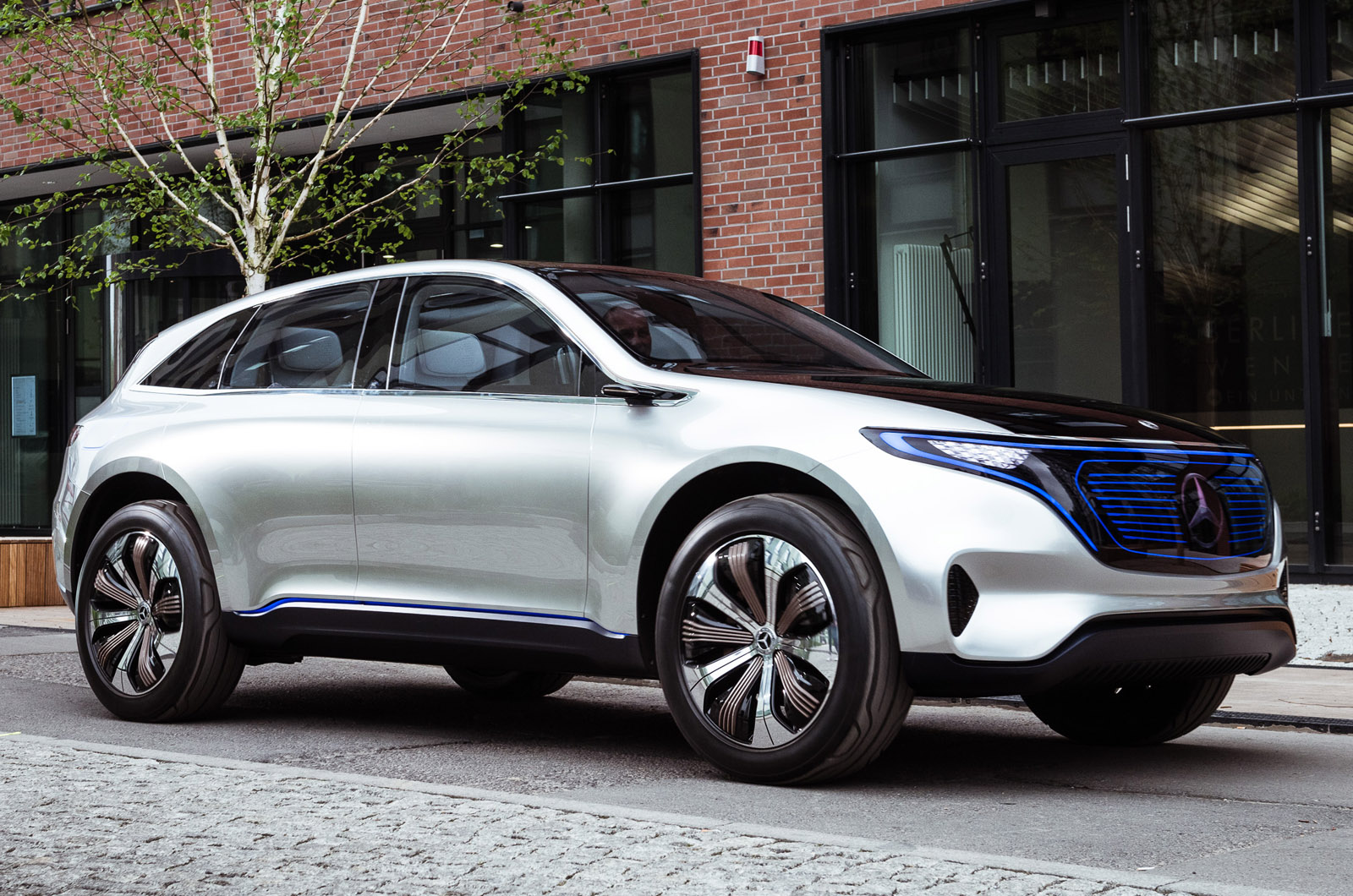 But unlike the E-Class's two separate 12.0in screens, the EQ concept has one single 24in screen. There is no touch function for the expansive display itself; instead commands for the sat-nav, air conditioning, vehicle set-up and communication options are taken care of by either a touch-sensitive pad mounted on the centre console between the front seats or smaller touchpads within the horizontal spokes of the steering wheel.

Befitting the futuristic theme evident in other elements of the design, Mercedes has dispensed with its traditional graphics for the instrument and infotainment display in favour of detailed new 3D visuals that instantly grab your attention with their vivid colours and ultra-high definition.

The concept car boasts seats for four people, but Mercedes officials indicate that the production version of the model will offer space for five adults.

On the road: experiencing the Mercedes EQ C

The EQ concept proves every bit as convincing on the move as it does standing still. The airy cabin gives a sense of spaciousness from the passenger seat, even if the header rail for the heavily raked windscreen sits uncomfortably close to your head.

With the front seats perched up high, you get a commanding view of the road and a good sensation of speed once underway. But with a flat floor and no real footwell of any kind you’re forced to sit quite upright with your knees set high, as it so often is in concept cars.

The seating position reminds me a lot of the original Mercedes-Benz A-Class, which also boasted a completely flat floor. Interestingly, Mercedes hints the production version of the new zero-emissions SUV will receive more defined footwells and lower set front seats at a height similar to those of the GLC in a move aimed at providing the upcoming EQ C with greater comfort. 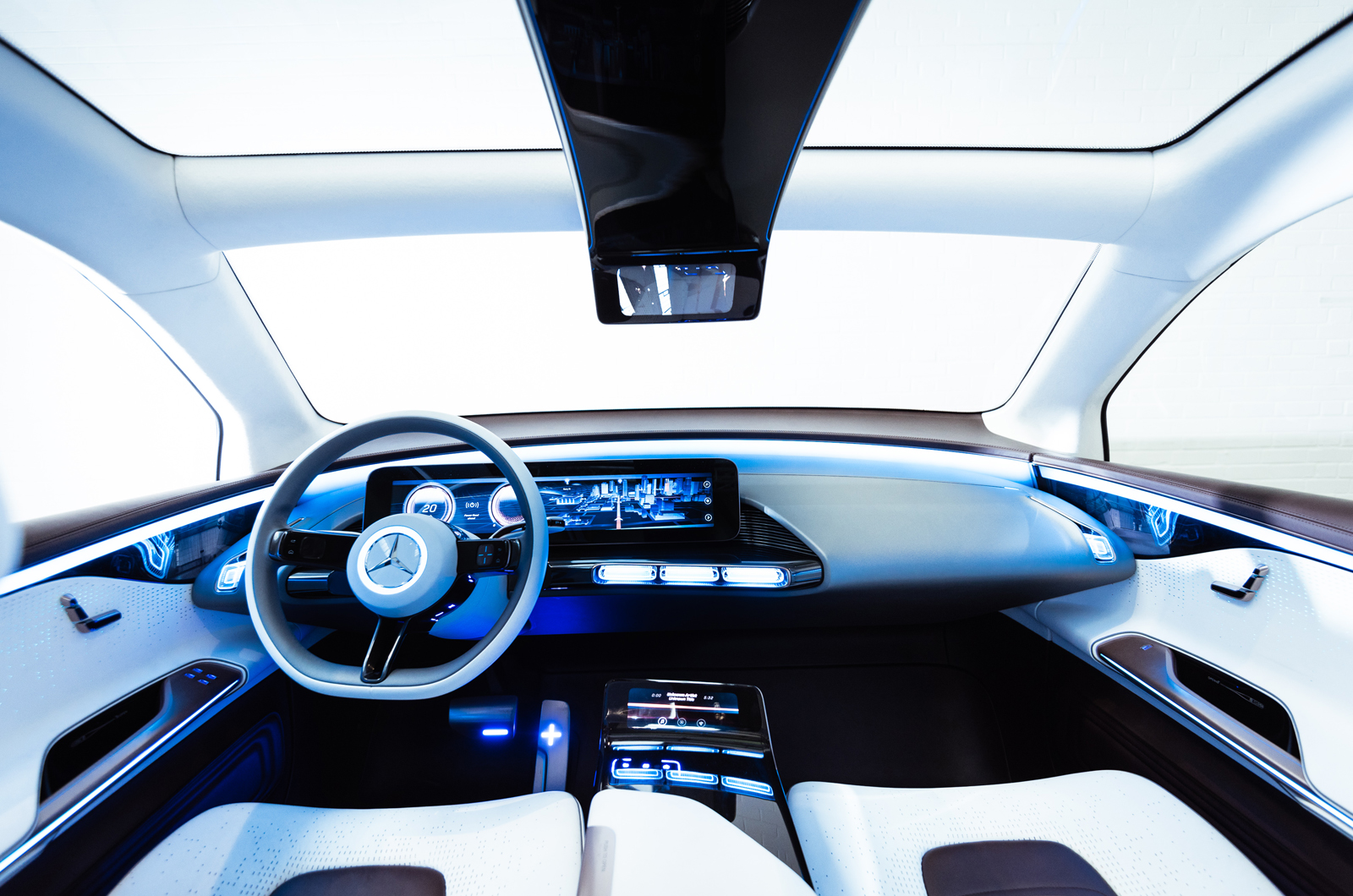 The silent qualities of the concept’s electric driveline perfectly compliment the visual calmness brought on by the uncluttered design of the interior at typical urban speeds.

A hearty punch of the aluminium throttle pedal unleashes a heady turn of acceleration and an accompanying whine from the electric motors, though without the proper production driveline set-up as a guide it would be premature to make any appraisals about the performance potential of the EQ C just yet.

The same goes for its ride quality, which is clearly compromised by the EQ concept’s hand cut 22in tyres and obvious lack of suspension tuning. With the production version set to offer the latest Air Body Control suspension, complete with three chamber plungers like those employed by the latest S-Class, it should cope with cobble stones and nasty transverse bumps in a more distinguished fashion than the firm riding one-off show car. 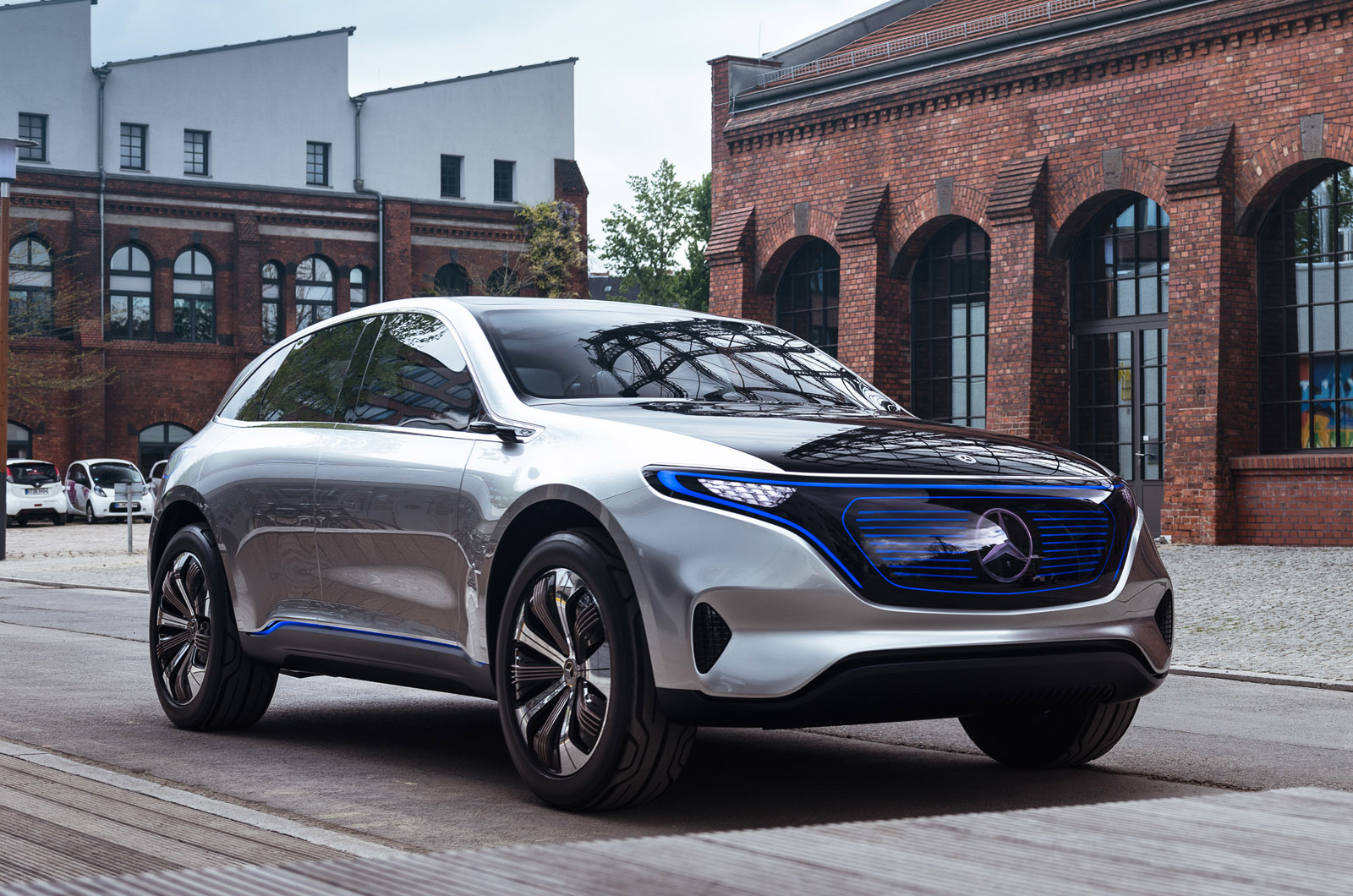 It is only a preview of what to expect, but if Mercedes can instil at least a small portion of the design and engineering substance already evident in the one-off EQ concept into the promised production version of the electric-powered SUV due out some two years from now, it will be well worth the wait.

Two things really stand out here: the exceptional interior, which takes full advantage of the packaging benefits provided by the dedicated electric car platform and its flat floor, and the user interface, which promises a whole new level of user friendliness in Mercedes’ upcoming electric models.

Looks like the future's bright. Everyone of the EV's pictured above look classy, the only downside is we've got to wait. After watching Telsa grow it makes you wonder whatever happened to foresight in the motoring world?
fadyady 15 May 2017

Judging by this evidence we can surely look forward to some exciting electric motoring.
abkq 15 May 2017

Looks very promising. A scaled down version is what the current A class should be. Also makes the BMW i3 looks unnecessary complicated.