BACK TO ALL NEWS
Currently reading: New Maserati MC20 supercar leads Italian brand's revival
UP NEXT
EV chassis could provide a lifeline for niche car makers

Maserati has revealed the MC20 supercar, which will spearhead a bold multi-billion pound revival plan for the historic Italian marque that includes a return to its performance-focused and racing roots.

Initially being sold with a mid-mounted 621bhp V6, the new halo model will also offer electric power in the future. Convertible and motorsport versions are also on the cards.

The MC20 is the first supercar that Maserati has produced since the limited-run MC12 two-seater it launched in 2004. While that model was essentially a reworked Ferrari Enzo, the MC20 marks Maserati’s return to producing its very own sports cars, after parent company Fiat Chrysler Automobiles (FCA) sold its stake in Ferrari back in 2016.

FCA bosses have radically revamped the previously announced product plan for Maserati, approving a bold model line-up overhaul with a target to triple sales within three years with 13 new products scheduled in the next three years. All new models will be electrified from this point on, confirmed chief operating officer Davide Grasso at the MC20's unveiling, adding that the brand is developing Level 3 autonomous capability for future cars. As well as the MC20, battery electric versions of the firm's forthcoming new SUV, and the next GranTurismo and GranCabrio are planned. 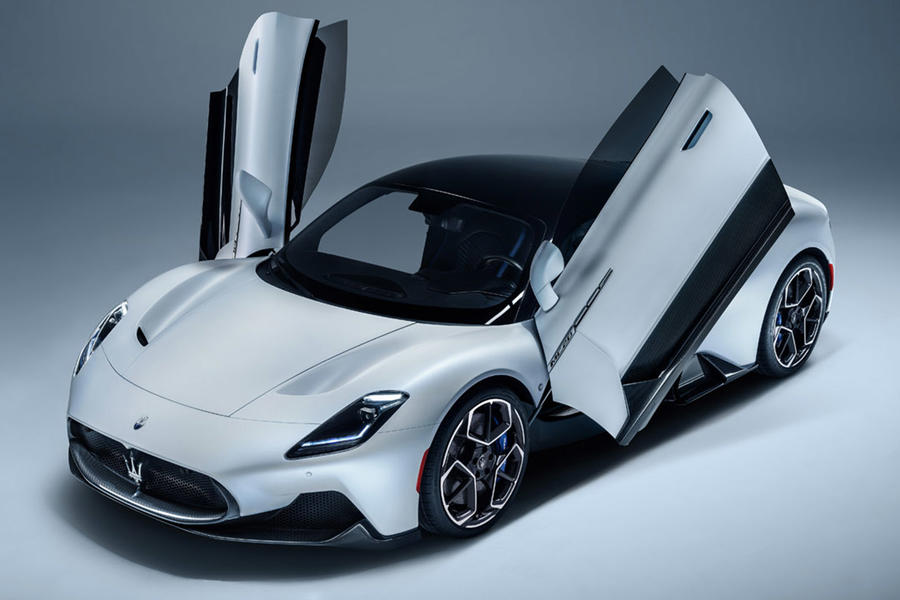 "The MC20 is more than a Supercar. It’s set the cornerstone to build Maserati for the future," Grasso added.

Priced from £187,230 and arriving in the UK in the second quarter of 2021, the MC20 is designed to signify Maserati’s ‘new era’ by restoring its reputation for producing high-end supercars, boosting the prestige of its saloons and SUVs. It will also return Maserati to motorsport, although the company has yet to outline its plans in this area.

Following the overhaul of Maserati’s product plan, the MC20 was designed at the firm’s Modena base in around 24 months. It has direct design links to its MC12 predecessor, and Maserati claims that it’s also intended to reflect the brand’s history “with all the elegance, performance and comfort integral to its genetic make-up.”

However, the key design focus was on optimising performance. The MC20 was designed for maximum aerodynamic efficiency, with more than 2000 man-hours spent using Dallara’s wind tunnel and more than 1000 fluid dynamics simulations conducted.

This enabled the MC20’s designers to minimise the use of aerodynamic appendages, aside from a small downforce-generating rear spoiler, and resulted in a drag coefficient of 0.38Cd.

Maserati says engineers from its Innovation Lab and powertrain specialists were involved in the project from the beginning, emphasising the focus on performance as well as design.

In recent years, Maserati has relied heavily on Ferrari technology, in particular for engines and powertrains. But with Ferrari no longer part of the FCA portfolio, Maserati has returned to producing its own engines, and the MC20 arrives with the first powertrain it has produced in-house in more than 20 years.

Named Nettuno (Neptune), in reference to the Roman god who inspired Maserati’s trident logo, the 3.0-litre twin-turbocharged petrol V6, developed at the new Maserati Engine Lab in Modena, produces 621bhp at 7500rpm and 538lb ft of torque from 3000-5500rpm.

It also features the new Maserati Twin Combustion twin-spark ignition system and in the MC20 gets official fuel economy of 24.3mpg and CO2 emissions of 262g/km. 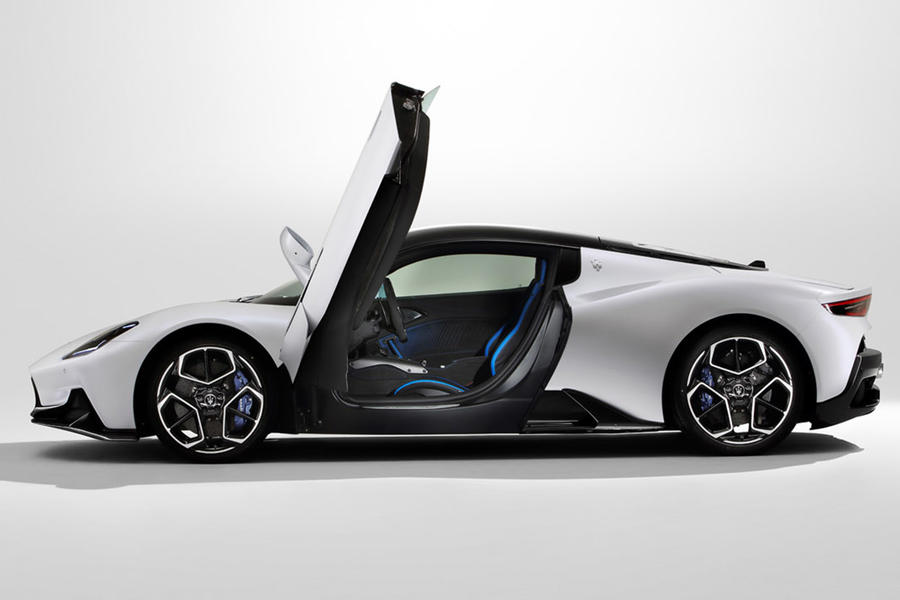 Power is delivered to the rear wheels though an eight-speed dual-clutch automatic gearbox and a self-locking mechanical limited-slip differential at the rear. An electronic diff is optional.

Five driving modes are on offer: GT, Wet, Sport, Corsa and ESC Off, which shuts down every control function.

The MC20 makes extensive use of carbonfibre and other lightweight materials, resulting in a claimed kerb weight of less than 1500kg, giving it a power-to-weight ratio of more than 414bhp per tonne. That ratio enables a 0-62mph sprint of quicker than 2.9sec, with 0-124mph taking 8.8sec. Top speed is claimed to exceed 202mph.

The MC20 features double-wishbone suspension all round and makes use of a virtual steering axle at both the front and the rear. It sits on 20in tyres, while there are ventilated 380x34mm six-piston Brembo brakes at the front and four-piston 350x27mm items at the rear.

The early work on the MC20’s driving dynamics was undertaking using Maserati’s Virtual Vehicles Dynamics Development simulation software, which was developed by its Innovation Lab. Maserati said it used the system for 97% of dynamic tests, optimising the relatively short time before the final tuning was conducted with extensive road and track running in prototype form.

The two-seat interior is accessed through butterfly doors that Maserati chose because they give easy access and improve ergonomics. 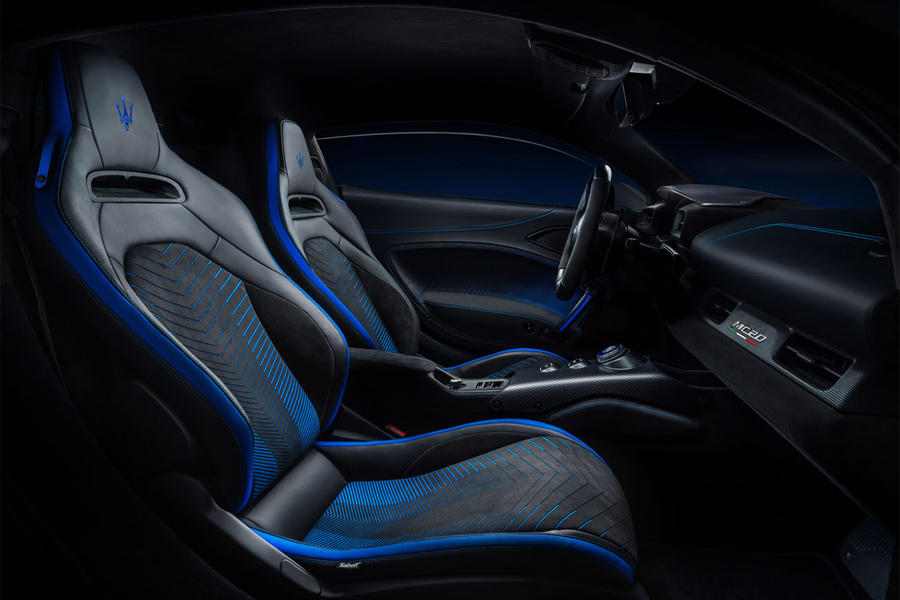 The cabin takes a minimalist design to reduce distractions for the driver. There’s a 10in digital instrument display and a 10in screen for the multimedia system, while the carbonfibre-covered central console features only the driving mode selector, a wireless smartphone holder, infotainment controls and a small number of other features.

All of the key controls are located on the steering wheel, with dedicated ignition and launch control buttons.

The MC20 has a 100-litre boot, which is supplemented by a 50-litre secondary storage compartment at the front.

The MC20 will be built at Maserati’s historic Viale Ciro Menotti plant in Modena, on a new production line at the site previously used to build the Granturismo and Grancabrio.

The supercar’s production launch is scheduled for the end of this year, and Maserati is already accepting orders. UK-bound cars will come in right-hand drive, and will feature carbon ceramic brakes as standard.

Maserati has confirmed that the MC20 has been designed to allow for a convertible variant, which Autocar understands is due next year.

Significantly, it also says that the MC20 is designed “for full electric power”, with the full electric variant schedule to arrive in 2022. Maserati has declined to comment on the specific performance of the EV, but are aiming for it to eclipse class rivals, with acceleration that eclipses the petrol-engined MC20.

Maserati will offer electrified hybrid or full electric versions of all its future models, a vital step in helping FCA to meet ever-stricter EU emissions targets.

lovely car and probably handling like a dream but concerning to design it´s a complete copy of the Lotus Evora....... Maserati designers without ideas? or maybe they should ask Russel Carr to design it......

I think they missed a trick with the styling, very generic-lights Jag F type, rear- Huracan, doors-i8, interior- alpine, mirrors- Ferrari. Not saying it doesn't look good but doesn't stand out from competition who at this price have more desirability. Also, would it not have made more sense if they were making a bespoke engine to produce a hybrid to differentiate it from rivals?.

This is at best will be a niche player in a limited market, not the brand leader the MC12 was, though in fiarness it was a reskinned  Enzo to a degree...

God, how disppointing - no flair, no style, nothing new, no "wow" factor, just a boring cliched design.