In 1988, this very Ferrari Testarossa starred in an Autocar test. We take it for a blast after tracking it down again
Open gallery
Close

Back in 1988, testing a Ferrari in Britain was up there with cracking time travel, proving Fermat’s last theorem and anyone other than McLaren winning a grand prix: theoretically feasible but almost impossible aims.

Back then, Ferraris were imported by Inchcape, whose PR agency took pride in ensuring what it regarded as the grubbier elements of the fourth estate – the motoring press, mainly – were kept as far as possible from its products.

Take its flagship, the Testarossa. It had come out in 1984, but four years later we’d had not one whiff of its 5.0-litre flat 12 motor. Its reputation said it was a bit of a duffer: quicker but uglier and less involving than the Boxer it replaced. But we didn’t actually know.

Now you must forgive a small, self-indulgent digression, because it is central to this story. I joined Autocar in June 1988 and by July the editor had already realised his mistake.

You won’t find my name in any magazine published at the time because, as said editor was kind enough to point out, “I’d only have to take it out again”. I was sinking fast and needed a lifeline, something to make me indispensable to Autocar, for long enough for me to figure out where I was going wrong. And this car, this actual car, was that lifeline. In short, my dad had a Testarossa.

He let us borrow it because he recognised I was already in the Last Chance saloon and about to fall off my bar stool. I’d like to say the resulting story about an Exmoor encounter with a Lancia Delta Integrale did the trick, but I didn’t even write it. But I did drive both cars, crashed neither, showed I was at least not incompetent behind the wheel of a genuinely quick car and therefore provided some grounds for keeping me. So this car saved me. 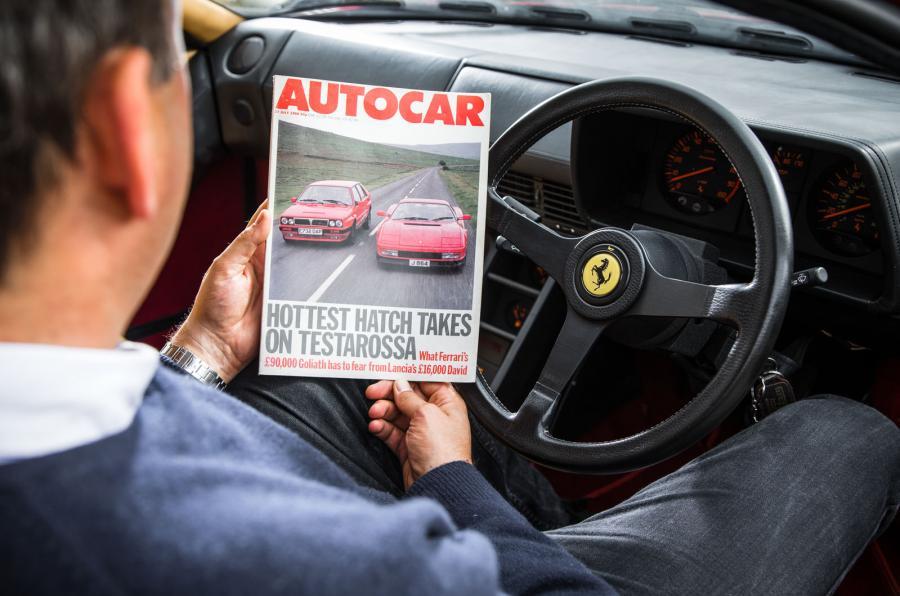 It was another former Autocar employee, Ben Oliver, who 27 years later alerted me to its reappearance. He spotted an ad on the Graypaul Classic Cars website, name-checking my father and asking £185,000 for the car – a lot even these days.

So I rang Graypaul’s Robin Simpson, who said that after my father had sold it to Graypaul, having done a few thousand miles in it, they’d sold it to a man who kept it as an ornament for a quarter of a century. In its 28 years, the car has done just over 8000 miles, most of them with various Frankel backsides behind the wheel. Apart from the £8k Graypaul spent getting it road ready again, it was as I’d last seen it in 1988. Could I borrow it for a few hours? It would be a pleasure.

It was odd seeing it there. Even now, it is the only Testarossa I have sat in. Yet I remembered it all, my fingers automatically finding the door handle under those dramatic side strakes, how to open the bonnet and engine cover, where to find the fly-off handbrake and how to adjust (rake only) the three-spoke steering wheel. I remembered also that when the gearbox oil is cold, you use second only with a slow double-declutch shift or, ideally, not at all. 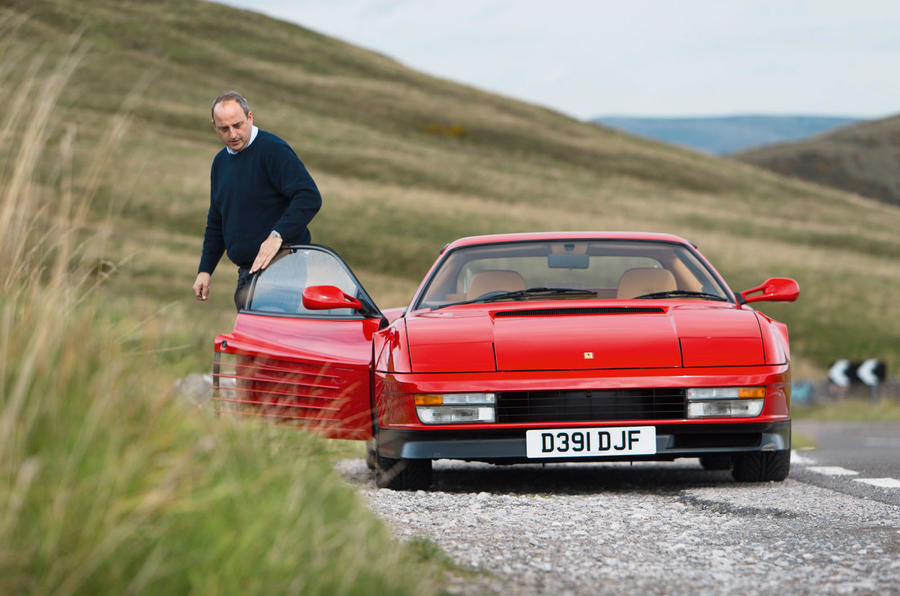 In its day, the Testarossa was criticised for being so wide as to be barely usable, but it’s about the same width as a 458, and few have complained about that. Now it feels almost compact and visibility is superb for a mid-engined car. The steering lock is exceptional and luggage space is vast. This would be a very easy car with which to live.

But I’m here to drive, and one twist of the key brings it all flooding back. Old-school Bosch mechanical injection ensures the engine fires instantly on all 12, so smooth there could be 24 in there. It’s not a true ‘boxer’ flat-12 any more than was the Boxer’s, because opposing pistons move in the same rather than different directions. It’s actually a 180deg V12. It has four overhead camshafts and 48 valves, but only 390bhp, just half what the F12tdf has today on only 1.3 litres more.

Its civility still surprises. For culture and class, I’m not sure this engine has ever been beaten, but you’d be amazed by how quiet it is. And the Testarossa’s ride quality would boil your brain. The old Ferrari breathes with every undulation in the road.

But does it still feel fast? Not at first. At low speeds, it feels rapid but no more – top-of-the-range Boxster pace at best, even if you use most of the 6800rpm it permits. What it retains is that weird old Ferrari ability to feel quicker the faster you go. Above about 80mph, it seems to break free from unseen shackles that have hitherto held it back. And, yes, here it still feels properly, exhilaratingly fast. This is a wide-open-space kind of car. To find such a road and row it along in third and fourth, savouring the scrape of that fabled open-gate gearshift, is to unearth a form of motoring pleasure lost to those who drive today’s supercars.

This is not a world defined by numbers, be it a Nürburgring lap time, a 0-100mph sprint or maximum recorded lateral g force. It’s about feeling the road surface replicated in the rim of the steering wheel, engine noise not synthesised in some semi-anechoic laboratory but the combustion chambers of one of the greatest road car engines of all time. It’s about your right foot being the only traction control you’re going to get, adhesion limits you can actually understand and, above all, you being in control and on the stage, not sitting in the stalls bedazzled by a pyrotechnic light show in whose creation you played no part. 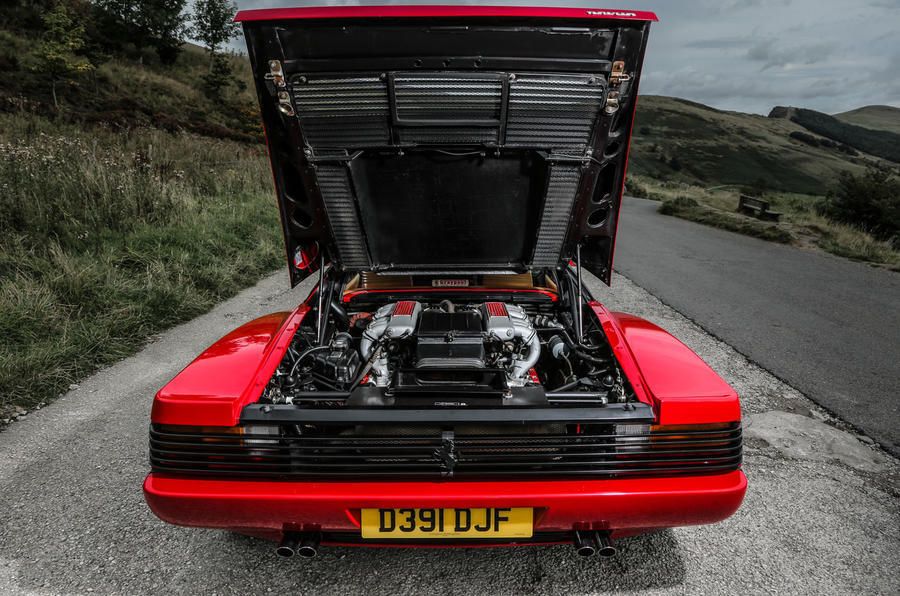 Back in 1988, my boss, the late Howard Lees, wrote about this very car: “The Testarossa emerged as a much better road car than I had been led to expect. It has towering performance, perfect manners and very good visibility; all that talk of it being too big is sheer nonsense. It’s a car of genuine quality, worth every penny of £90,000.”

At the time, I rather wished he’d been somewhat more fulsome in his praise, but now I think his words were fair enough. Even then, it wasn’t one of the greatest supercars and wouldn’t now make it onto anyone’s list of the top 10 Ferraris of all time. But it was a good car, and I know that now because only good cars mature with age. Without exception in my experience, bad cars just get worse.

And this time around, the Testarossa wasn’t just good; it was wonderful.

With no need to prove itself any more, it could simply be enjoyed for its sound, looks, character and superbly relaxed attitude to the open road. I always knew this would be a day to enjoy, but not until I’d handed it back in the almost certain knowledge that I’ll never see it again did I realise it would also be one to remember. 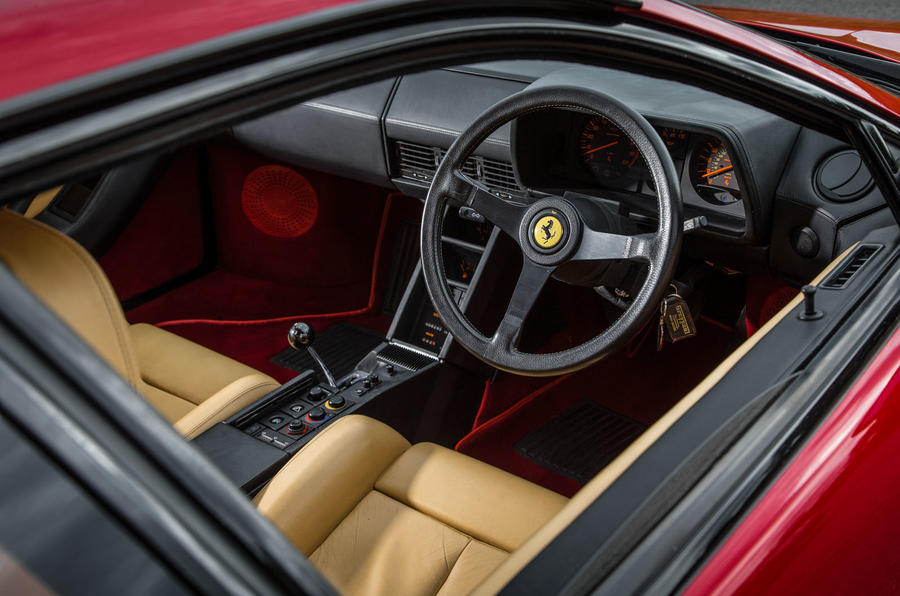 To him, it was the trip of a lifetime. My father bought the Testarossa as a semi-retirement present to himself. In place of the daily grind, he bought a share in a small business in the north of England and the grand plan was to use the Ferrari to travel maybe once a month between there and where he lived in Jersey.

But first he had to get it home. So he flew to Italy, collected the car from Maranello and, pausing only for the obligatory lunch in the Cavallino, set off for home. A stickler for obeying running-in instructions, he was still able to cruise at more than 100mph in the early stages and then, after a few gratuitous detours took the mileage past 1000, rather more than that, for hours on end.

I then used it for our feature, after which it did briefly become his commuter car before he realised that, even in 1988, sitting in heavy traffic on the M1 isn’t much fun whatever you’re in. It was also the era of Thatcher’s bull market, where any new Ferrari was a rapidly appreciating asset. Graypaul made him an offer he felt unable to refuse and the Testarossa was gone, never to be seen again. Or so I thought.

This article was originally published on 29 November 2015. We're revisiting some of Autocar's most popular features to provide engaging content in these challenging times.

I just love this car. The

I just love this car. The looks, the genuinely luxurious yet understated interior. And that utterly magnificent V12. This is a Ferrari for the ages.

Finally, on long straights, the growl gives way to the wailing of the exhaust as the thing sucks the road beneath it, turning it into a streaking grey blur. You’ll back down way before the Ferrari does. There are times where you might want the more guttural sound and shove of its older sister, the 512BB, or the ten-tenths mechanical communication of deadly rival the Lamborghini Countach.