This was a super-saloon we so wanted to love – and we did, despite its many flaws
Open gallery
Close

Back in the mid-2000s, the fifth-generation Quattroporte arrived to prove Maserati could still hold its head high amongst the increasingly luxurious German competition. Here's how it performed in the Autocar road test:

These are uncertain times for Maserati. In the Fiat Group’s post-General Motors reorganisation, the Trident has been separated from Ferrari and linked instead with Alfa Romeo in an effort to extend the company’s range and – eventually – return it to profitability. This flagship Quattroporte is the car to tempt much-needed new money to Modena.

Traditionally, the four-door Maserati hasn’t been a beautiful car, lacking the elegance of its GT brethren. It has taken Pininfarina to deliver a truly attractive Quattroporte with this model and it is a shape without an unattractive angle.

With rivals such as the benchmark BMW M5 toting 500bhp, the front/ mid-mounted 394bhp V8 was always likely to suffer by comparison – and the Quattroporte trailed 0.7sec behind the M5’s 4.6sec 0-60mph time. By 100mph, the Italian’s 12.8sec performance was 3.0sec adrift of the German’s. 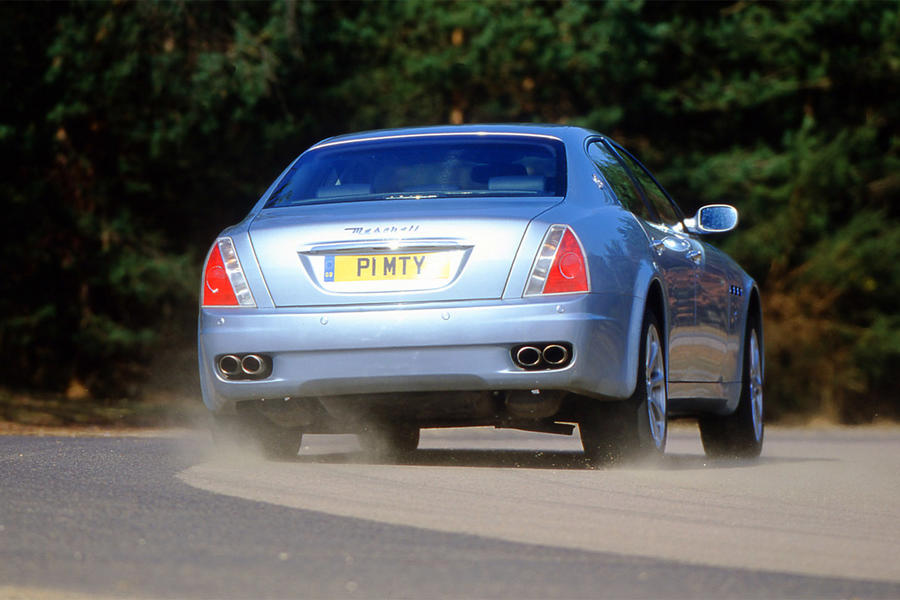 But the Maserati’s V8 is magical, with a thicker songbook than even the M5’s V10. Low-rev woofle and mid-range induction growl are trumped by a scream that transports you straight to Monte Carlo’s infamous tunnel, mid-grand prix.

Short gearing means a lot of gearchanging. Which is fine when driving hard, the robotised manual gearbox giving fast shifts in Sport mode without the kidney-bruising abruptness of the M5’s SMG. It’s in Drive mode that it trips up. Press on and it’s a real pain, with a long wait as the software decides which gear to provide, and a reluctance to upshift when you’ve finished accelerating. It never lets you relax in the way that an auto-made-manual such as the Aston Martin DB9’s ZF six-speeder does.

The Quattroporte demonstrates an appetite for corners that its size would never lead you to expect. Exceptional body control plays a big part in shrinking the Maserati, but there’s a price to pay – and that’s a very un-limo-like ride. It’s a chassis that never settles, with a continual fidget on the motorway that becomes more intrusive as the speed drops. On town Tarmac, it’s downright uncomfortable.

If the ride disappoints those looking for comfort, then at least the cabin won’t. There’s huge space front and rear and a finish that exudes a restrained opulence. 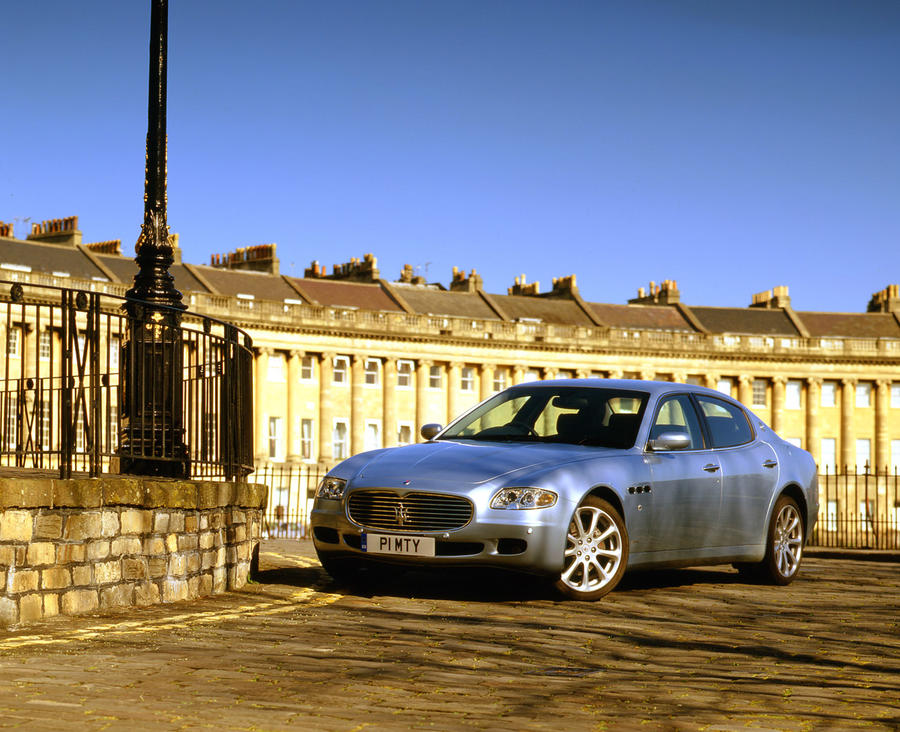 We wanted this to be a five-star car. All of the elements were in place: stunning looks, incredible chassis balance and inspirational engine. But the Quattroporte isn’t that car, and it’s more than just a few tweaks away from those elusive extra stars. Few cars are so beguiling yet completely exasperating all at the same time.

It was hard to subdue our blind prejudice - Alastair Clements

As enthusiasts, road testers have a passion for cars, but we must also set aside prejudice and favouritism, and focus on the facts. Never was this more challenging than with the Quattroporte V. After the disappointing Biturbo-based IV, overweight III and underpowered II, the fifth-generation four-door Maserati super-saloon was the first to truly capture the spirit of the fabulous 1963 original.

In fact, it was better in every way – not least the sensational looks. But even more exciting was how it went, the quad-cam V8 producing 394bhp at a screaming 7000rpm and always urging you to use every one, particularly at the test track, where its chassis encouraged lurid yet controllable slides.

Yes, the gearbox was dim-witted, the ride unsettled, the brakes dead and the engine well off the pace of class leaders for outright urge, but this was a car you’d find any excuse to keep driving. Except it wouldn’t always let you. After threatening to fail to proceed several times, it inevitably broke down more permanently when I was on my way to a wedding. With my new partner.

Was it as good as an M5, E55 AMG or XJR? No. Would I have still bought one if it was my own cash? Absolutely.

This car still gets my juices moving.....I love the way it looks and in the 4.7, fifth gen, the way it goes. I wouldnt even look at an M5 or AMG something or other as an option, they just dont have the charisma, even if they are faster....so what in the UK!

They ruined it with the 6th gen - sadly!

A saloon doesnt fit into my lifestyle at all, having been a serial Mercedes-Benz 4x4 owner since 1991, but if I had the space for another car - purely for business trips, I would buy an immaculate, 5th gen 4.7, service historied example in a heartbeat.

Yes I know that despite the bargain basement pricing now.... the running costs would be extortionate. But what the hell - you only live once, and this car delivers on so many levels.