BACK TO ALL NEWS
Currently reading: Maserati MC12 successor considered
UP NEXT
All-new entry-level McLaren to be 600bhp-plus V6 PHEV

Maserati may consider producing another low-volume model, according to boss Harald Wester.

Speaking to Autocar, Wester confirmed that the company “could do a limited edition, but not yet”.

Maserati’s most recent limited edition was the 2004 MC12, a rebodied version of the Ferrari Enzo that sold out despite being priced far higher than the firm’s regular models. It was also developed as a racing car.

Maserati’s Modena plant currently makes the carbonfibre-bodied 4C for Alfa Romeo. Prior to that, it built the limited-edition Alfa 8C Competizione, which was heavily reliant on Maserati hardware. Wester pointed out that Maserati has only 1100 staff, making it agile and flexible enough to take on such a project.

Following the Levante’s introduction, Maserati has minor updates for the Ghibli and Quattroporte planned for later this year. Beyond that, a successor to the GranTurismo series, which was launched in 2007 and currently sells at around 40% of its manufacturing capacity, is on the horizon. “The GranTurismo will go when it is 10 years old,” Wester said.

Maserati is currently in the design phase for the GranTurismo replacement, according to Wester, who added that the new model “will not be to the same formula” for reasons of “accelerating technology”. He declined to elaborate further but implied that the cabriolet version may go unreplaced because there is no demand for it in China.

Meanwhile, Wester would like to see Maseratis selling for higher prices. “People say we are selling our cars too cheaply,” he said. Do not expect sudden price rises, however. Wester aims to raise average transaction prices — the money customers actually pay for their cars, including options — “over time”. 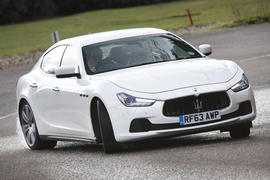 2 August 2016
That sounds wonderful, but only if they are going to sell it to a hand selected customer base for a gazillion pounds.