BACK TO ALL NEWS
Currently reading: New 2021 Skoda Fabia to receive substantial design overhaul
UP NEXT
Worth the weight? Lotus Emira first ride

Skoda will finally bring its ever-popular Fabia supermini back into line with its Volkswagen Group siblings with an all-new version this year, and a lightly camouflaged prototype gives a clear look at its evolved design.

The new Fabia will take styling cues from newer Skoda models including the Octavia and Scala. The rear end, especially, looks to have been brought into line with the Czech maker's other models with a thicker bumper and a flat panel between the reshaped brake lights, which will likely bear the model's name. A new, larger front grille looks to have been inspired by the new Enyaq electric SUV, and prominent black detailing on the red car suggests the sporty Monte Carlo variant will survive into the next generation.

Plans to bring the fourth-generation Fabia to market in 2022 have been revised to reduce the complexity of having older and newer platforms produced at the same time within the group. As such, it will be revealed in the first half of this year, with first examples expected to arrive in UK showrooms well before the end of 2021.

The current architecture of the Fabia, a re-engineered version of a platform first used back in 2008, will be junked in favour of purely MQB A0 underpinnings. That’s the same platform used by the Audi A1 Sportback, Seat Ibiza and Volkswagen Polo – as evidenced by the Polo-based Fabia development mules that were spotted recently. 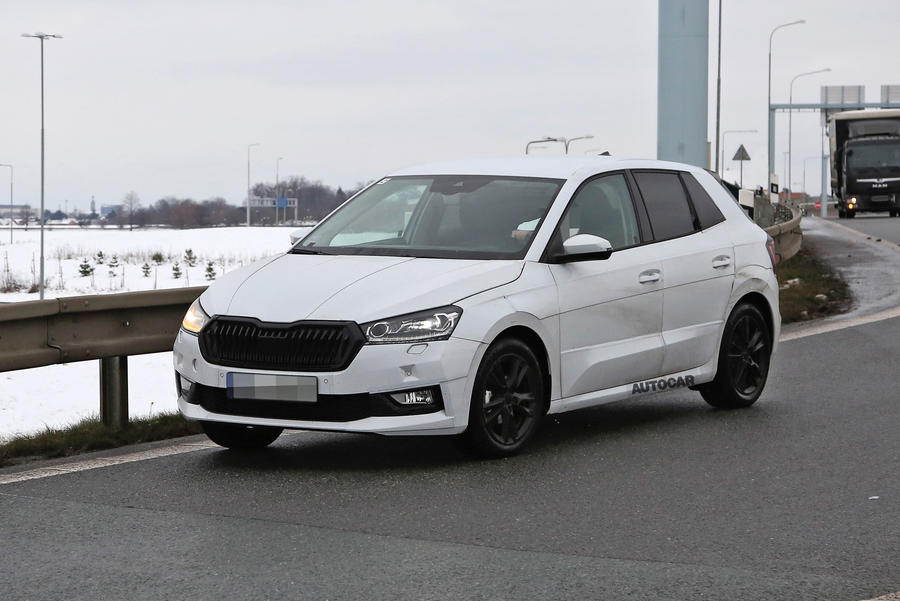 Crucially, this platform will ensure the Czech supermini is no longer the poor relation of the family. The interior is likely to receive the biggest overhaul, however, given that the current Fabia’s dashboard design and technology are now off the pace compared with the Volkswagen Group standard. As such, a revised layout, much larger and clearer displays and Skoda’s latest infotainment system and connectivity features will be introduced.

Despite wider group plans, the Fabia won’t offer any form of electrification initially – not even mild-hybrid engines. Insiders tell us this will keep the Fabia affordable at its core, appealing to drivers who are put off by the influx of superminis moving up to and even beyond £25,000.

As electrified powertrain technology becomes more attainable in future, however, it could be brought across from other group models.

As such, the new Fabia’s engines will be familiar, albeit now without any diesels. The turbocharged three-cylinder petrol TSI will sit at the heart of the range in varying power outputs, while more powerful four-cylinder engines (and a cheaper naturally aspirated three-pot) could also be used.

We won’t see the return of the vRS badge, but sources say the popularity of today’s top-tier Monte Carlo model will mean a greater emphasis on sportiness (visually or otherwise) higher up the range.

The switch to the MQB platform should also yield noticeable forward strides in the fields of refinement and comfort. The current Fabia remains one of the more spacious in its class, so actual size may not change, however.

We expect prices for the Fabia to increase beyond the £12,990 base price of today’s model but not significantly so.

I just wanted to comment to show how old some of the other comments are and how people were commenting on this story when it had completely different content!

Aside from that, this new Fabia looks as big as a previous shape Ford Focus - I know cars keep getting bigger but some people want a small car to be small - not a medium sized car with a well over 20k price tag (it's amazing how many entry-level small cars from the super-mini class cost that much now).

The latest Polo and Fiestas are very similar in size, so the Fabia is only catching up with the rest of the class. Prices from mid teens are about average for non hybrid superminis though.

That's irrelevant if you still want a small car; following a bad trend set by others isn't a good thing and doesn't give people what they want. If you want a bigger car, buy one from the class above. If you want a smaller one.....oh, they're killing off city cars but making superminins bigger!

Not all non hybrid entry level models are priced mid-teens, some are well above. The VW Polo starts at £17,125, the Peugeot 208 with weedy 75PS engine is £17,575. And it's the manufacturers that are imposing hybrids on people, or using pointless mild hybrids like Suzuki and Ford are, as just another excuse to raise prices. They provide no benefit in real-world conditions, but are just another thing to go expensively wrong outside of warranty or kid people they are being more environmentally friendly.

"We won’t see the return of the vRS badge.."

They are a bit similar

I do agree they're all a bit too similar. The seat should be the fun youthful one, the Skoda the budget one and the VW the comfortable one. Audi the premium one. At the moment VW/Audi are downgrading their interiors and Skoda has matched or even surpassed. The seat appears to be in the Skoda's spot with cheaper plastics inside but a thousand or so less. Slightly more sporty but differences are very subtle.
View all comments (10)