BACK TO ALL NEWS
Currently reading: Naran Automotive reveals GT3-inspired 1048bhp hypercar
UP NEXT
2024 BMW X3 primed to take on Mercedes-Benz GLC

Fledgling hypercar brand Naran Automotive has released the first images of the 1048bhp four-seater it plans to launch in 2022.

Naran intends to build 49 examples of the ‘hyper-coupé' after dynamic development work over the course of the next year, although that number could eventually swell with the arrival of a roofless barchetta variant.

Development having started in 2017, each car will cost around one million euros after customisation, according to founder Ameerh Naran, who aims to follow in the footsteps of supercar entrepreneurs Horacio Pagani and Christian von Koenigsegg.

The car’s USP will be an unusual one. It will offer serious track-day ability, only with space for three passengers on board and as much – or as little – material lavishness as you want. Think Ultima GTR meets Bentley Flying Spur.

The car will not have much in common with existing luxury super-GT models, Naran explained while revealing to Autocar the full-scale model seen here. Compared to the likes of the Aston Martin DBS Superleggera or Ferrari 812 Superfast, it will offer an even faster, more "visceral and extreme" experience and, of course, there are also those back-row seats to differentiate it further. 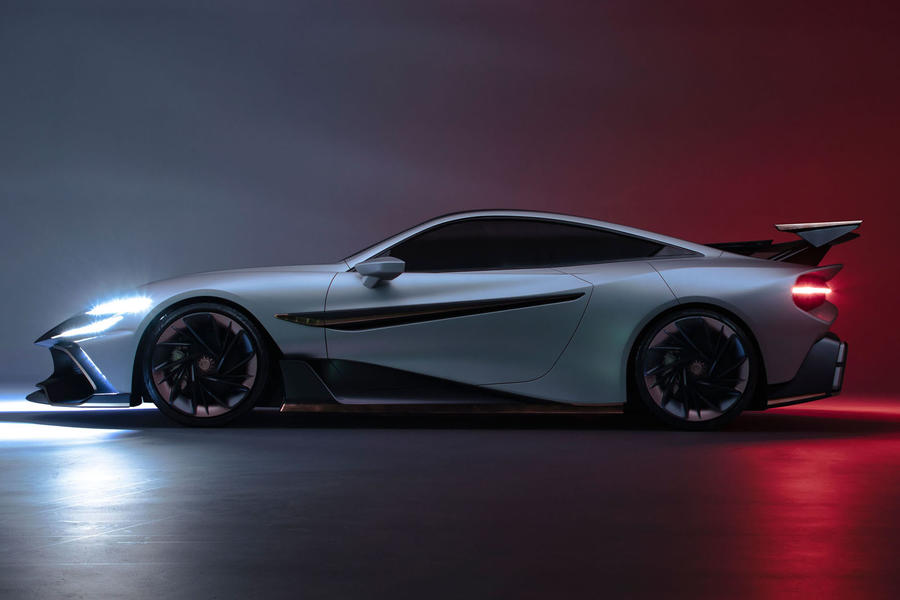 To make the car commercially viable and to help with homologation, Naran Automotive has a deal in place with BMW Motorsport, which will supply key elements of the package before they are upgraded, in some cases extensively.

The monocoque is shared with the 8 Series, which is why the glasshouse of the Naran is identical to that of BMW’s flagship coupé. Much of the rest – including the subframes, which will allow the engine to sit low and tucked right up to the bulkhead  – is reportedly bespoke.

The body, penned by Apollo IE and De Tomaso P72 stylist Jowyn Wong, is formed of composite panels book-ended by dramatic, hinged clamshells at each end.

That body is also considerable. In the west London garage in which Naran Automotive’s static model was revealed, it all but dwarfed a nearby Rolls-Royce, and the chief engineer of the project, former Jaguar Land Rover man Steve Pegg, claims the car is roughly as wide as BMW’s M8 GTE Le Mans car. However, weight is said to be around 1620kg, which would make the car lighter than Mercedes-AMG’s C63 S Coupé.

Quite apart from the need for kerbside presence, the reason for the width is to manage weight transfer and create space for the adjustable rose-jointed suspension that uses a double-wishbone design.

Along with much of the aerodynamic elements of the car, the suspension has been designed and engineered by Northants-based EY3 Engineering, which has held various works contracts in touring car racing. Controlling everything will be the same four-way adjustable Ohlins coil-over units seen in GT3-category racing, while broad, 22in carbon-aluminium wheels sit at each corner. AP Racing will supply the carbon-ceramic brake discs.

Notably, the steering will use electro-hydraulic assistance, from which, Pegg says, owners can expect "fantastic feedback". 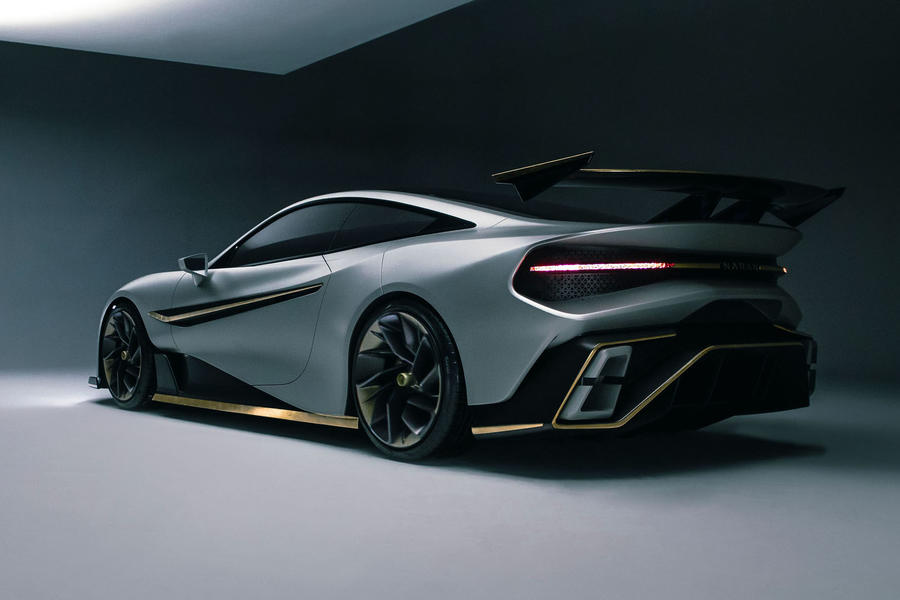 Motorsport outfit Racing Dynamics is responsible for delivering the engine – a mighty 5.0-litre twin-turbo V8 with the headline 1048bhp and 764lb ft of torque, with the totality of the latter arriving at 3000rpm.

Taking BMW’s 4.4-litre block (as seen in the latest M5 and BMW M8 models) as its base, almost every component is upgraded, although details on what, where and how are scarce at the moment. ZF’s eight-speed automatic transmission will deliver drive to all four wheels. Or, if the multi-plate clutch in the central transfer case is disengaged, to the rear wheels alone. To facilitate this kind of adjustability, Naran Automotive’s car will use BMW-sourced axle drive units.

Inevitably, Naran intends to test the car’s mettle on the Nürburgring Nordschleife, which will include an attempt at the lap record for road-legal front-engined cars.

Pegg says simulations, which factor in Pirelli Trofeo R tyres, currently indicate that a time of around 6min 40sec might be possible, not least because even at 125mph the car should generate more than 400kg of downforce. If and when an attempt is made, Naran will also benefit from the experience of EY3’s Daniel Mense, who was instrumental in the electric Nio EP9’s record-breaking lap.

Having spent the last year working in CFD (computational fluid dynamics), Naran Automotive says it will shortly begin shakedown testing at UK facilities from its R&D base near Coventry. Assembly will take place at Racing Dynamics in Aachen, Germany, at a rate of two cars per month. 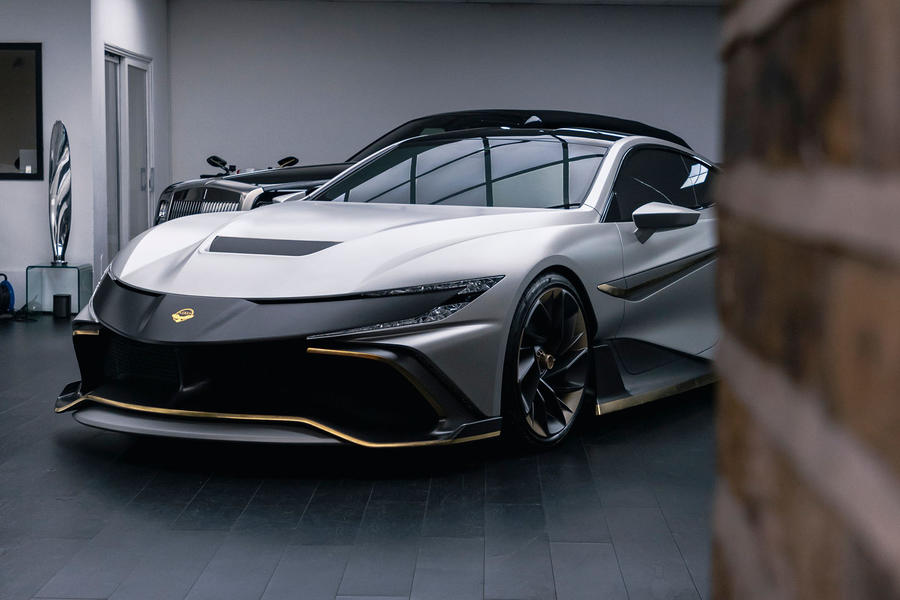 As for the interior, Recaro will supply the seats, which will be carbon-shelled with the additional benefit that their very slim backs will liberate six or so inches of rear leg room.

Rare and unusual finishes are also the order of the day, and former Aston Martin Lagonda interior designer Kate Montgomery is in charge of this aspect, where horse hair and marble have been already requested. Such eccentric choices seem at cross-purposes with the raison d’être of a track-bound supercar with more than 1000bhp, let alone one with sophisticated suspension and the generous use of lightweight materials elsewhere, but customisation is key in this echelon of the market.

"We’ve had a fair amount of [customer] commitment already," said Naran, without disclosing any specific figures. "In general, those people already have a Pagani, Bugatti and Koenigsegg in their collection."

Log in or register to post comments
FastRenaultFan 25 November 2020
Good look to them. Maybe they will make it big in a few years and get into Formula1. As for the look of the car I think it looks like a Honda NSX had a baby with a McLaren and this is the result.
Peter Cavellini 25 November 2020

Good look to them. Maybe they will make it big in a few years and get into Formula1. As for the look of the car I think it looks like a Honda NSX had a baby with a McLaren and this is the result.

I think it's over styled, the body is almost like artwork, it's also kitcar-ish , buying in the bits, no way like Pagani and Koenigsigg, and, there's no performance figures, not even projected ones.