Gordon Murray’s new V12-engined T50 supercar, the “logical successor” to his seminal McLaren F1 of 1992, has been unveiled at the Surrey factory where manufacturing will start late next year. Deliveries are due to begin early in 2022.

The new car, which Murray calls “the purest, lightest, most driver-focused supercar ever built”, is an ultra-light, mid-engined, all-carbonfibre three-seater, dubbed the T50 because it’s Murray’s 50th car design in a career spanning more than half a century.

It uses a refined version of the ground-effect ‘fan car’ technology its designer first introduced to grand prix racing with the Brabham BT46B for the 1978 Formula 1 season. Powered by a new 650bhp naturally aspirated 4.0-litre Cosworth V12 with a 12,100rpm redline, the T50 will be built entirely by Gordon Murray Automotive, the bespoke company Murray launched to stand beside his existing design business when he revealed his plans for this car back in 2017.

Read more: Gordon Murray on making the T50 a reality

Just 100 road-going T50s will be built, each at a cost of £2.36 million before local taxes – so about £2.8m in the UK. Most have already been snapped up by global car connoisseurs, notably in the US and Japan, each of whom has paid a £600,000 deposit for the privilege. A further £750,000 is due when their car is specified in detail, with the balance settled upon delivery.

The first T50 is scheduled to reach its owner in January 2022, and the entire batch will be completed within the same year. After road car production ends, there will be a run of 25 hardcore, track-only editions. Murray says he would love to see the car race but is reluctant to commit to a programme at present, because he wants to concentrate on the road-going version and because sports car and GT race regulations beyond 2022 are still far from certain. 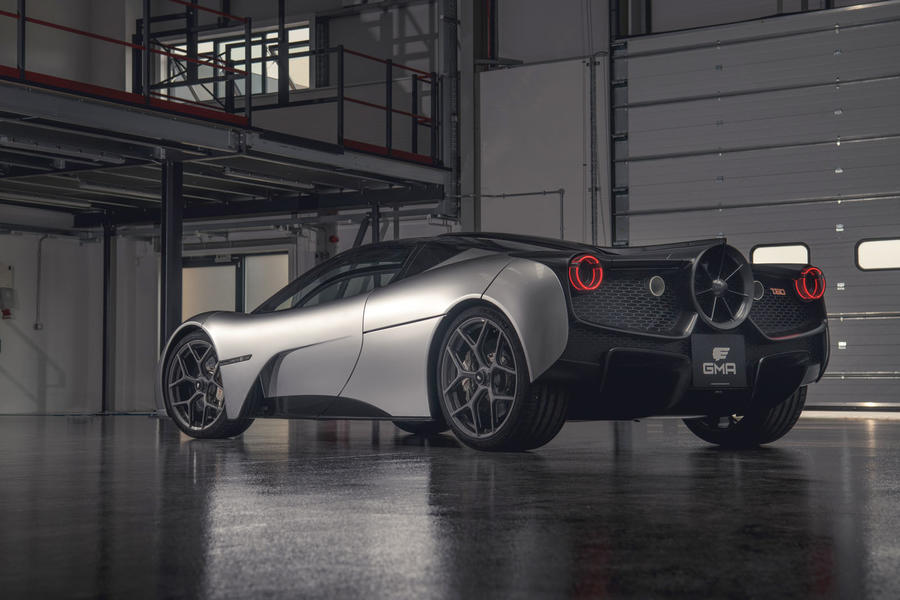 Like its revered McLaren predecessor, the rear-wheel drive T50 places its driver centrally in the cabin, as in a jet fighter. Its footprint is similar to that of the Mini Countryman (it’s smaller than the Porsche 911 and lighter than the Alpine 110) and it forgoes door mirrors for cameras to avoid adding to its 1.85m body width, so it should feel highly manoeuvrable in tight going.

The T50 was styled entirely in-house, with Murray himself the leader of the tiny design team. There are obvious references in its shape to the F1 — such as the compact size, the arrowhead front panel, the roof-mounted air scoop, the dihedral doors and the use of ‘ticket windows’ in the side glass — but strenuous efforts were made to make it look even more petite than its forebear.

There’s a major contrast between the graceful front end of the T50 and the extreme functionality of its rear end, which features large exhausts, business-like mesh for engine bay cooling, a giant underbody diffuser and a 400mm fan. The fan is driven by a 48V electrical system and its job is to develop downforce by rapidly accelerating the flow of air under the car. Murray says this “rewrites the rule book for road car aerodynamics”.

The fan, the diffuser and a pair of dynamic aerofoils on the body’s upper trailing edge combine to develop far more downforce than any natural system could and therefore develop levels of cornering grip hitherto unknown in supercars. There are six aerodynamic modes. Two of them, Auto and Braking, work automatically, depending on the car’s speed and the driver’s input. The others — High Downforce, Vmax, Streamline and Test — are selectable from the cockpit.

High Downforce is self-explanatory, while Streamline and Vmax are similar in that the former configures the aerodynamics with a “virtual long tail” by running the fan at full speed and retracting the active flaps on the top and bottom surfaces. Vmax runs the V12’s crank-mounted 30bhp integrated starter-generator flat out to contribute extra power in three-minute bursts. At speeds of above 150mph, the roof-mounted induction air scoop boosts maximum engine output to around 700bhp. 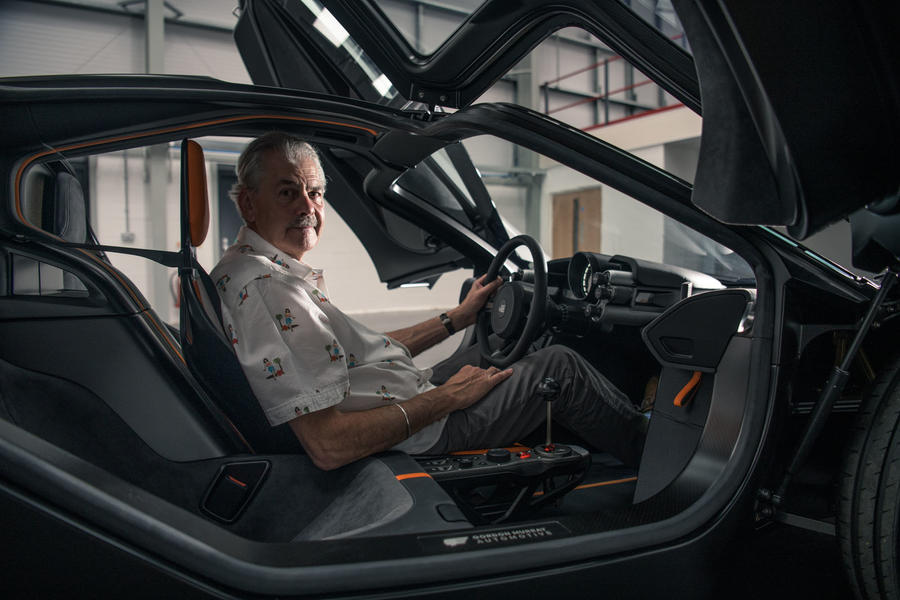 Impressive interior space is another theme of the T50. Its cabin is even roomier than that of the F1 (not to mention all modern rivals) and access to the centre seat is easier, because the floor is now flat. The analogue switchgear and instrumentation – very much designed in jet fighter style – are relatively simple but crafted to Swiss watch quality.

The two side-mounted luggage compartments are as roomy as those of the F1 but can now also be top-loaded. Murray may be selling a £2m-plus collector’s car, but he’s determined that it will be usable day to day.

“The T50 is entirely road-focused,” he said, “which is why it sets new standards for packaging and luggage space. It betters the F1 in every way: ingress and egress, luggage capacity, serviceability, maintenance and suspension set-up. Also, driver-selectable engine maps ensure a driving mode to suit every situation.”

Murray said the supercar his team benchmarked against most often during the T50’s development was actually the 28-year-old F1. That was because no one has since attempted to build a car with the same credentials: an ultra-light, centre-seat supercar with a turbo-free V12 and a manual gearbox.

The T50 is said to weigh just 986kg at the kerb – about two-thirds of the weight of what Murray insists on calling “an average supercar”. Keeping control of weight isn’t just about using exotic materials, he said; it’s a state of mind. The design team held weekly meetings about it. The T50’s carbonfibre tub chassis weighs less than 150kg with all panels. Every individual nut, bolt, bracket and fastener — about 900 of them — was individually assessed for weight-saving.

The transversely mounted six-speed manual gearbox, supplied by Xtrac and designed with a new thin-wall casting technique, is 10kg lighter than the already-featherweight ’box used by the F1. The Cosworth V12, meanwhile, saves another 60kg over the F1’s BMW-derived engine and much more compared with that of a Ferrari. Even the carbonfibre driver’s seat weighs only 7kg, and it’s 3kg for each passenger seat. 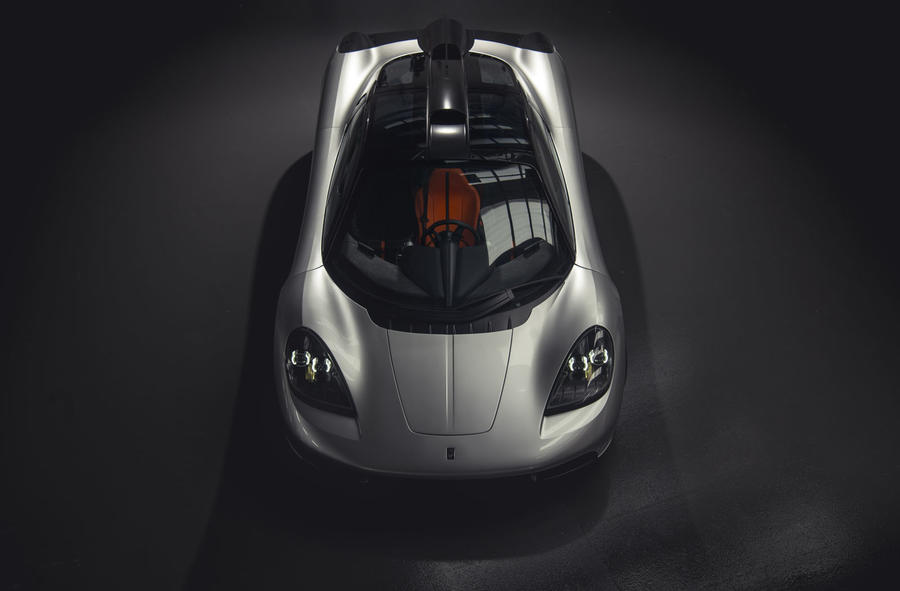 Why take such trouble? Because a heavy car can never deliver the benefits of a light one, said Murray. The lightness and the 650bhp potential of the new V12 give the T50 a power-to-weight ratio that most conventional supercars could only match with a power output of close to 950bhp. Originally claimed to be 3890cc, the engine is now confirmed to be 3994cc in capacity.

Despite the figures, Murray won’t be aiming to break Nürburgring lap records or set blistering acceleration times. “I have absolutely no interest in that,” he said. “Our focus is on delivering the most rewarding driving experience of any supercar ever built. But rest assured, we will be quick.”

Murray counts himself lucky that the T50 wasn’t already in production when the Covid-19 upheaval began. Time lost from the development schedule is already being made up, thanks to co-operation from the company’s supplier base.

“We’re using the finest British component suppliers we know, including Cosworth and Xtrac,” he said. “I’m determined that the T50 will be one of those cars that make people proud to be British.”

Opinion: Why the Gordon Murray T50 could be a daily driver

Each to their own but by 2022 V12s will be dinosaurs in the car world IMHO. Most likely to see one in a exclusive car auction rather than a public road too

V12 manuals are dinosaurs and have been for years, and any car produced in such limited numbers is an unlikely sight on public roads...

Many modern cars have lost their soul. Skidpan and accleration stats tell little of how good cars are to drive - an Alfaholics GTA may be better to drive than a 911 Turbo but objectively doesn't register as competition.

Murray addressees that aspect of driving with the T50. Some 2 ton 4WD car with launch control will probably still out accelerate it from the lights but that it does should completely uninterest genuine buyers.

It seems like a fabulous piece of kit, but there are aspects of the design that look a little off. Something about the curvature and heft of the rear haunches. Oddly, Murray says he was unhappy with aspects of the F1 design, which really did look pretty perfect to me (certainly in prototype form).

This T.50 is still gorgeous in all the ways that matter though.

Each to their own but by 2022 V12s will be dinosaurs in the car world IMHO. Most likely to see one in a exclusive car auction rather than a public road too

Talking your usual cr*p here - in 18 months V12s will not "be dinosaurs", sure electric has a massive part to play in the future, but it ll be a few more years yet before that power source becomes more common than ICE cars. You do make a valid point about most likely seeing itin an exclusive car austion though . . .

. . . which is the worst thing about this car - all Murray's skills in car design are wasted on a few super rich people, he should be putting his immense ability to work on cars that more people can enjoy rather than playthings for stupidly rich people.

It'll be a while before before an electric supercar matches the attributes of this fine example of British engineering. How to save weight for example. I admire anyone who pushes boundaries and takes the difficult path to achieve the seemingly impossible. We need much much more Gordon Murray type thinking post Brexit and post Covid

I love everything about this approach.

100% agreed, but wish you hadn't mentioned the MR2 lights - can't unsee that now!

100% agreed, but wish you hadn't mentioned the MR2 lights - can't unsee that now!

MR2 lights - really ? All I can see when I look at this is F1, there are F1 design cues all over it, some of the most sriking of whichare those lights, they, along with the rest of the front end just shout "Mclaren F1"