Chrysler is displaying a Lancia Delta carrying a Chrysler grille at the Detroit motor show.

Company sources say the plan is to try and push Chrysler upmarket in the US, and it hopes that Lancia's 'sophisticated, fashion associated' image will rub off.

Pre-show reports also said that Fiat would display an all-eletric Fiat 500 on the stand, although this has yet to be put on show.

The Chrysler stand is also being used to showcase vehicles from Fiat's luxury offshoots, Ferrari and Maserati.

Chrysler will build the North American 500 at its plant in Toluca, Mexico from next year, offering it with a 1.4-litre petrol engine ranging from 99bhp to 173bhp. 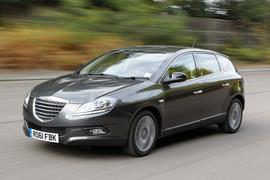 The Chrysler Delta is a bit different from the norm, but it is too patchy to recommend it highly.

[quote Autocar]Chrysler is displaying a Lancia Delta carrying a Chrysler grille at the Detroit motor show.

It makes me sad to see Lancia, once the ultimate manufacturer of brilliant sports cars (D50 F1, Fulvia, Stratos, Delta Integrale to name just a few) and pioneering new technology, now being used to revamp a dying American car maker, for years renowned for making rubbish. The Lancia/Chrysler merger is a dreadful idea, showcased by this concept car.

I could not agree more.

Sticking the radiator grille of america`s biggest failure onto the nose of an italian icon is crass beyong belief. This is a new automotive low.

Can't understand any defence of Lancia,

They are a bit of an embarassment - A look at their website shows all of their hideous creations - Good Idea for Chrysler to use Fiat designs - Bad Idea to use Lancias ugly designs.

I hope Fiat doesnt decide to Replace Chrysler in Europe with Ugly Lancias.

Chrysler has a style of its own, shouldn't use Lancia.

[quote fhp11]They are a bit of an embarassment - A look at their website shows all of their hideous creations - Good Idea for Chrysler to use Fiat designs - Bad Idea to use Lancias ugly designs.[/quote] I am in a minority of one here, but I was surprised how good looking (make that: not bad looking) the Chrysler Lancia was. When I heard about the reskin, I had visions of a design that would reinstate Ken Greenley (Ssangyong) to the automotive hall of fame. The unexpected result is actually, well, okay. I quite like it.

Looks more like a Saab grille from some angles!