BACK TO ALL NEWS
Currently reading: 2021 Land Rover Discovery: prototype of facelifted SUV spotted
UP NEXT
WRC Croatia preview: championship returns to asphalt

Land Rover will launch its first hybrid Discovery as part of a roster of updates aimed at boosting the model’s sales, which continue to fall below expectations.

Photos of prototypes show a substantial disguise for what is described by a Land Rover source as a “model-year update”, suggesting the changes are more far reaching than the usual equipment upgrades and light tweaks. More revealing still, however, is that the first prototype we spotted was registered as a hybrid model.

New images show a disguised prototype from all angles, confirming that any planned styling changes are subtle and likely limited to new light clusters and reshaped bumpers.

Land Rover is yet to officially confirm which hybrid powertrain the initial test mule was using. It’s possible the firm is considering introducing a plug-in hybrid variant with the four-cylinder P400e system used on the Range Rover and Range Rover Sport.

However, Autocar understands the model spotted testing was a mild-hybrid, using the 48V system added to the Range Rover last year. The only current Land Rover system suitable for a car of this size and weight is the latest turbocharged 3.0-litre straight-six petrol engine mated to a starter-generator and 48V battery. 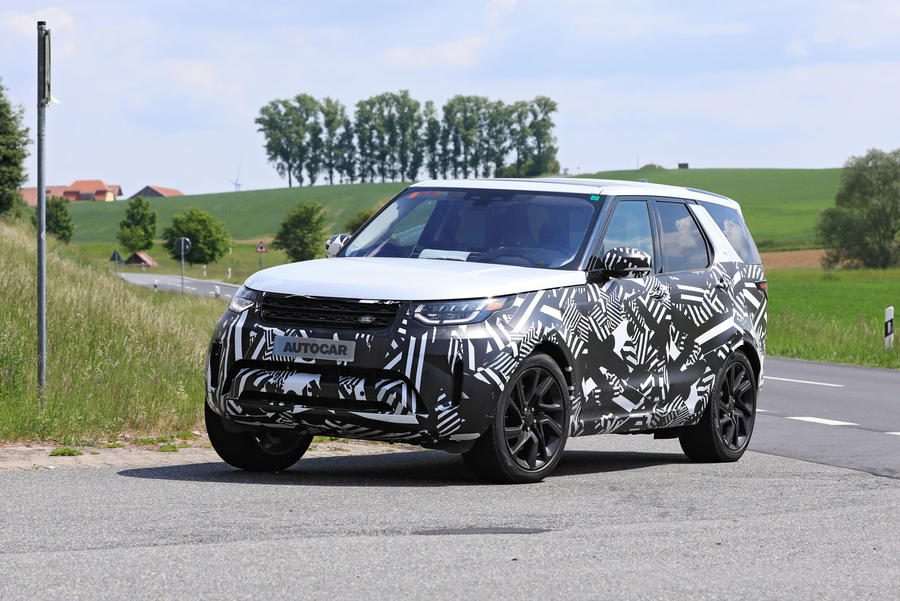 However, given the Discovery’s diesel-heavy sales mix, expect such a system to be introduced in the four-cylinder and six-cylinder diesels for the seven-seat SUV’s launch, likely at the end of 2020.

Updates such as this will be crucial as Land Rover aims to avoid fines under the EU’s fleet average CO2 target. The brand’s two biggest hopes for achieving this will be the new Discovery Sport and Range Rover Evoque plug-in hybrids, which are set to be delivered to customers in May. They use a 197bhp 1.5-litre three-cylinder petrol engine and a 107bhp electric powertrain for an electric-only range of about 30 miles.

The extent of the visual changes to the Discovery isn't yet clear. The front end of both test cars features the most extensive disguise, suggesting a new grille and bumper, but it remains to be seen if the controversial asymmetrical rear-end design will remain or be overhauled.

Technology is expected to advance, with revamped infotainment and display systems and active safety systems.

The recently revealed F Pace and Velar facelifts probably tell us what will happen here. MHEV diesels and petrols, straight 6 Ingenium, P400 PHEV, pivipro and new steering wheel and gear selector. No doubt the massive restyling exercise of stamping a new tailgate lower panel to centre the number plate will happen as well,

They are all in trouble

VW look set to lose the court cases representing class actions in the Uk and germany just to add to their woes,I think most will strugle with finances over the next 2 years unless they have virtually  zero borrowings

Grate car , love one but

Grate car , love one but shame it wont be avalabel for much longer . Land rover going bust!?!!?
rickerby 28 September 2020

Grate car , love one but shame it wont be avalabel for much longer . Land rover going bust!?!!?

didn't realise it had a fireplace ?