Available to order now, the plug-in hybrid variants are arguably as important as the new Defender in terms of sales, because they’re targeted at the lucrative fleet markets. With no electric Land Rover available yet, they will also have a huge impact on reducing the brand’s fleet average CO2 emissions, which must be done in order to avoid fines from the EU.

Work on the powertrain began in 2016 and was done in parallel with the creation of the Premium Transverse Architecture (PTA), which made its debut last year in the new Evoque and heavily updated Discovery Sport.

Both PHEV models, dubbed P300e, combine a new 197bhp turbocharged three-cylinder 1.5-litre Ingenium petrol engine with an eight-speed automatic gearbox and a 107bhp electric motor mounted on the rear axle. That links to a Samsung-sourced 15kWh battery pack. The result is a combined system output of 296bhp, with total (rather than combined) torque quoted at 398lb ft. 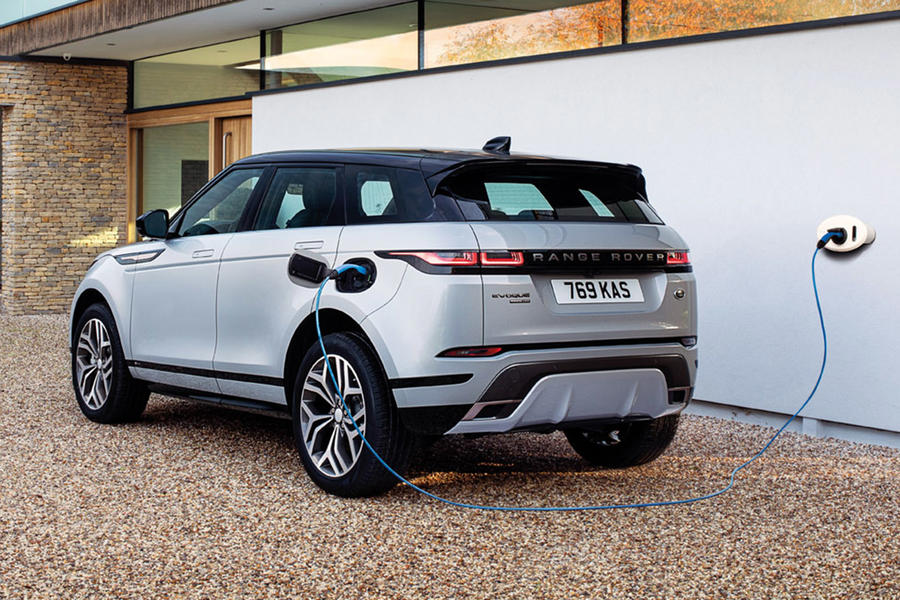 The Discovery Sport, being larger (but not available in PHEV form with seven seats), officially emits 36g/km of CO2, while its economy falls to 175.5mpg and its electric-only range drops to 38 miles.

The figures mean low company car tax for both, with the Evoque incurring a benefit-in-kind (BIK) rate of just 6% for 2020/2021.

Despite their environmental credentials, the P300e models are also the quickest members of their respective ranges. The Evoque P300e can do 0-60mph in 6.1sec and the Discovery Sport in 6.2sec.

Both are capable of reaching speeds of up to 84mph on electric power alone. At speeds above that, the electric motor is decoupled to reduce aerodynamic drag, making the cars front-wheel-drive.

Charging the cars at home can be done via a Mode 2 cable and a domestic three-pin socket, taking 6hrs and 42 mins, or from a 7kW AC wallbox, which can fill the battery from empty to 80% of its capacity in 1hr 24 mins. DC fast-charging (up to 32kW) reduces that 0-80% time to 30 minutes. 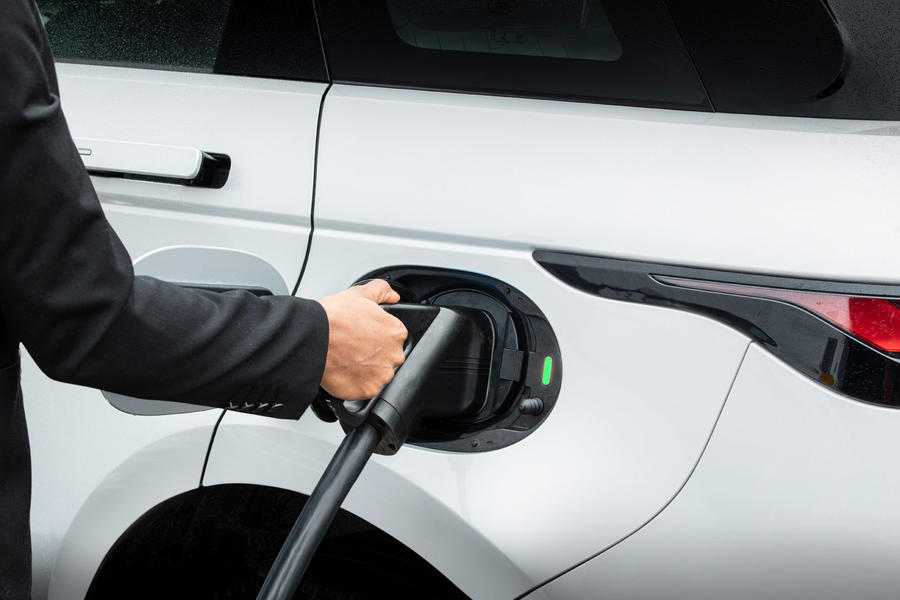 The charging port is sited on the rear wing, on the opposite site of the petrol filler flap.

Developing the new technology and control systems for an four-wheel-drive plug-in hybrid system was a challenge, Carey told Autocar, but packaging it all into the cars without compromises was just as hard.

The use of the three-cylinder engine was a core part of this. The unit itself is 37kg lighter than the four-pot on which it’s based, with Land Rover claiming “exceptionally low” friction. It’s also said to offer a better flow of exhaust gases to improve turbo response.

Mounted within the system is a belt-integrated starter-generator, allowing regeneration through braking and coasting. The transmission was newly developed for the models by Aisin, rather than Land Rover’s usual supplier, ZF. It weighs 5kg less than the brand’s nine-speed unit and is claimed to offer “enhanced refinement and shift feel”.

The rear axle’s electric drive unit slots between the integral-link rear suspension and needs no physical propshaft, so the drivetrain doesn’t compromise interior space in any way.

“We’ve also packaged the exhaust down the side of the car,” Carey said, “giving us a big new territory to package all of the power electronics in underneath. We’ve also been able to use the whole width of the car for the battery and fuel tank”. The latter is unusually large for a PHEV, at 57 litres.

“Everything is under the car, so there are few compromises,” Carey continued. “We can still offer a spare wheel, we haven’t reduced any space inside, the overhangs are the same and ground clearance is the same”.

The Evoque P300e is priced from £43,850 in S trim. SE and HSE trims (with or without the R-Dynamic pack, which brings sportier styling) are also available. The Discovery Sport comes in the same three trims but only with the R-Dynamic pack. It costs from £45,370.

Production is still on pause at all Jaguar Land Rover plants, but deliveries of the new P300e models are expected to start in the third quarter of this year. 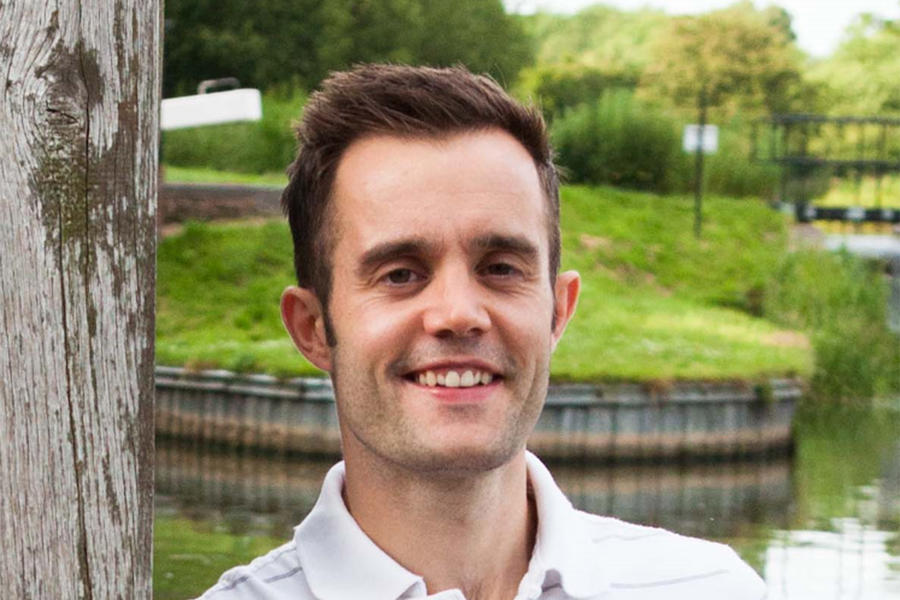 How big a job was integrating all the new components without compromising anything?

“Everything here is brand new tech. Not just the mechanicals but also the software: the vehicle control systems that work in harmony with the front and rear axle are all new to us. I started on this powertrain about three-and-a-half to four years ago. When we launched the new platform in the Discovery Sport and Evoque, this was all ready.”

Does switching to a three-cylinder engine harm refinement?

“If you lose a cylinder, the firing order changes, and that inherent three-cylinder character is something we’ve worked really really hard to mitigate. The benefits speak for themselves: we’ve got the weight benefit and the packaging benefit. We don’t see a big detriment between four cylinders and three cylinders [in refinement terms], as we’ve done some really special work on the mountings in 18 months.”

Are these as capable off-road as the standard cars?

“This was more capable off-road than the conventional petrol or diesel versions in our seasonal testing. The levels of control and composure that you’ve got, and the seamless control between front and rear axle, means we can put a lot of torque to the rear and then already predict the need to bring in the front axle to go through those surfaces.”

to the latest Volvo recharge PHEV model, in particular the XC40, which also uses a 1.5 litre 3 cylinder petrol engine and Aisin gearbox..

to the latest Volvo recharge PHEV model, in particular the XC40, which also uses a 1.5 litre 3 cylinder petrol engine and Aisin gearbox..

And similar to the BMW 225xe, 1.5L petrol with electric motors. Except BMW already had the powetrain on sale in 2015. The real question is why its taken LR so long to realise high CO2, heavy vehicle were inching towards the door and do something about it with these hybrids.

The TX taxi uses  a similar

The TX taxi uses  a similar Volvo engine, indeed I think it was out beforehand so probably gave Geely/Volvo some useful real life experience!

Not a bad effort, what they

Not a bad effort, what they really should do now is make this in (Euro 6d) 3 cylinder diesel form, would be even more efficient, particularly when regenerating the batteries itself.

What I cant understand though, is how the hell decoupling the rear axle has any effect at all on aerodynamic drag as the article says, someones writing b*ll*cks.

Not a bad effort, what they really should do now is make this in (Euro 6d) 3 cylinder diesel form, would be even more efficient, particularly when regenerating the batteries itself.

What I cant understand though, is how the hell decoupling the rear axle has any effect at all on aerodynamic drag as the article says, someones writing b*ll*cks.

I think the problem with diesels is they are not so good for constant stop/start as petrols which can do so much quicker and smoother.

This car will like any PHEV, once the battery is gone will still dump excess engine generated electrical power (and regenerative salvaged power) into the battery until there is suficient charge to switch off the engine and run a while on battery alone, nearly all hybrids run like this so the engine has to be able to cope with constant spells of stop/start, cooling down then running cool, warming up a bit, stopping again and so on. When you put your foot down whilst its in EV mode you need the engine to wake from possibly quite a while asleep and go to high power quickly to chip in its output current with the battery output.

It is possible though that said, Mercedes have done it with the GLE, used a 4cyl diesel, including a whopping battery for a 61 mile range.

This should be a seriously

This should be a seriously impressive PHEV, with a very good range and clever power-distribution. I recently used a new Discovery Sport for a week and it was considerably better than my quite-recent Japanese SUV. The refinement, ride & handling and drivetrain were on a whole better level of luxury -more so than I expected- and the economy for this 7-seater was still 40mpg in a 'mountainous' region. This DiscoSport PHEV will be my next company car, no question (assuming I survive CV..)