We liked the plug-in hybrid version of the Discovery Sport when it was launched towards the end of last year. Rather a lot, actually. There was little call for Land Rover to bring it back in for an early refresh, but still it has done, and so here we are reacquainting ourselves with the latest addition to Whitley’s electrified family.

Launched alongside a mechanically identical Evoque PHEV, the Disco Sport P300e mates its new Ingenium 1.5-litre turbo triple with an electric motor on the rear axle for combined outputs of 305bhp and 398lb ft, and packs a 15kWh battery pack for a claimed EV range of 43 miles. A torquey rear motor is good news for off-road ability, too, which should please the purists, who no doubt are still struggling to reconcile the Discovery nameplate with a buzzy little three-cylinder engine.

So there’s nothing new underneath. Well, newer, anyway. The main change for 2021 comes in the form of Land Rover’s much-ballyhooed Pivi Pro infotainment system, which made its debut on the Defender in 2019 and is now standard fitment on all but the entry-level version of the Discovery Sport and Evoque. The Discovery Sport and Evoque also have a revised line-up structure for 2021, topped out by high-spec Black and Autobiography editions, respectively.

We’ve been behind the wheel of the second-from-top Discovery Sport R-Dynamic SE, which is priced from a cool £51,895 outright when equipped with the P300e drivetrain, but promises improved economy and a lower benefit-in-kind tax rating than its pure petrol and diesel range-mates, so it all comes out in the wash (theoretically). Standard equipment at this level, aside from the aforementioned infotainment system, includes a slightly sportier bodykit, a raft of aluminium interior embellishments, dynamic indicators, an electronic bootlid, a panoramic (non-opening) roof and 12-way electronically adjustable, heated front seats. 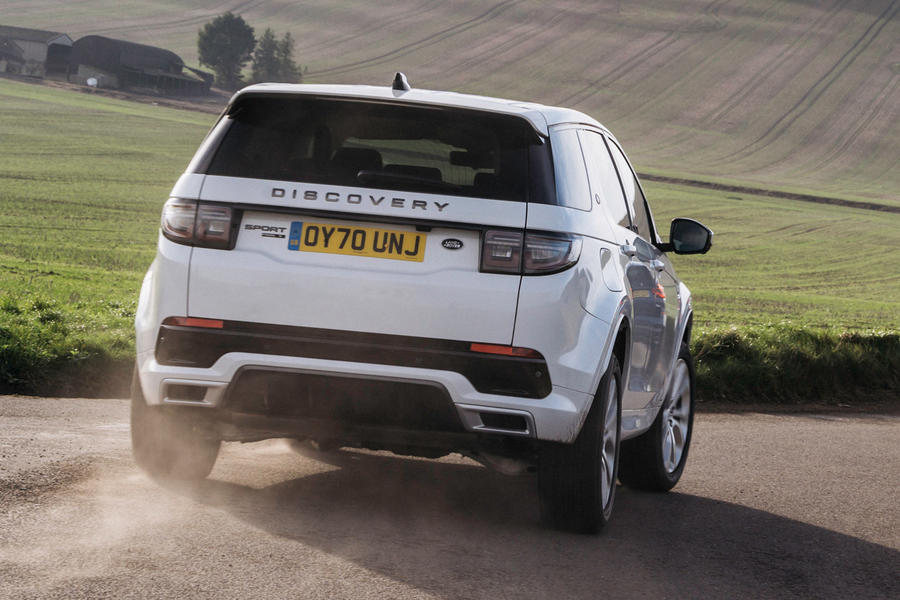 Once you’ve wrapped your head around the concept of a three-cylinder Land Rover, it’s a very easy powertrain to get on with. The charmingly thrummy combustion element is more than gutsy enough in its own right and quiet at a cruise, its electric team-mate having whisked you slightly out of the cul-de-sac, through the suburbs and passed the baton once up to speed. The 0-62mph sprint is put at 6.6sec, which, let’s be honest, is bloomin’ quick in real-world terms, so there’ll be no moaning here about the inadequacy of that turbo triple.

In fact, a combined power output of 305bhp makes this P300e both the smallest-engined and most powerful version of the Discovery Sport. Not to mention the most frugal: a WLTP rating of 175.5mpg puts it roughly on a par with the cheaper and more sedate Citroën C5 Aircross Hybrid, and because we know WLTP PHEV consumption figures are wildly unrealistic, we went for a 40-mile mixed-route jaunt and recorded an average in the high-30s, and that was with the battery running on (metaphorical) fumes. Not bad at all.

Fully charged, the battery should net you 43 miles of engine-off travelling, which is about as good as it gets from any PHEV SUV at the moment. That EV range, however, segment-leading though it may be, is the reason you can only spec a P300e with five seats; with the battery under the boot floor, there simply isn’t room for even a diddy third row. But a lofty passenger called the back bench one of the roomiest rear seats he’d ever sat in, so unless you have a particularly sizeable brood, the compromise on utility is minimal.

Indeed, the cabin in its entirety is a remarkably comfortable and convincingly premium proposition; the slick touch-panel control stack still feels brand new, and all materials feel what you might call 'reassuringly expensive' (as they should, on this £53,565 R-Dynamic SE car). Which brings us to the main change for 2021: the infotainment system.

It’s a well-rounded and stylishly rendered platform, and goes some way to making the case for the increasing dominance of touch-based controls, such is the ease of access and intuitiveness.

You can pinch, swipe and shout at it like you would with your smartphone, and unlike the infotainment systems of many rival firms, you’ll find yourself gelling with it in minutes, rather than days. If we were pressed for improvements that could be made, the screen could do with being angled slightly more towards the driver, and we’d be more than happy with fully physical controls for the climate stack, just to minimise eyes-off-the-road time when travelling at speed. 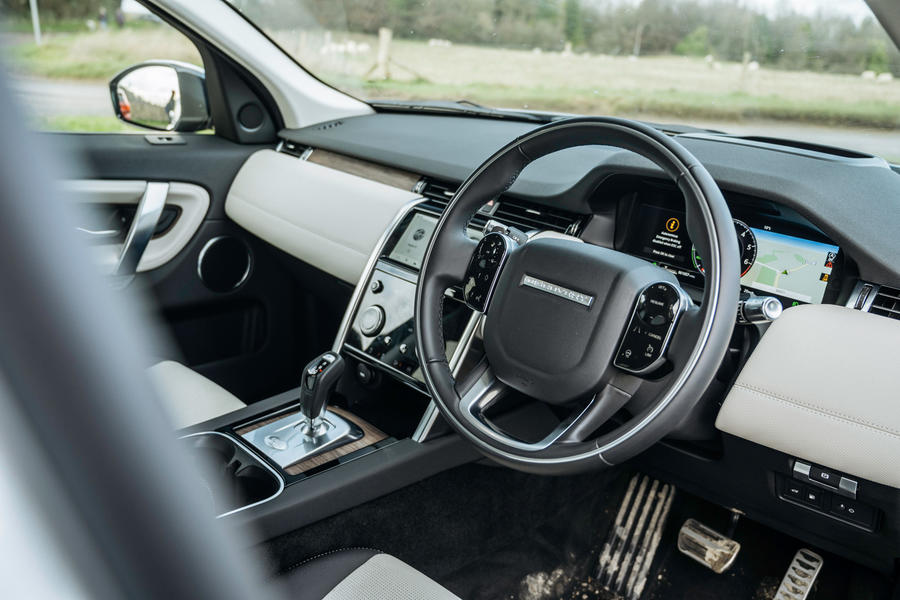 The new infotainment system, combined with a whisper-quiet and well-cushioned chassis, predictably low running costs and unexpectedly weighty steering, solidifies the P300e as a front runner in the burgeoning plug-in hybrid SUV segment.

This top-spec car is a significant investment, but you can save a couple of grand by specifying the P300e in mid-rung Urban Edition trim, and even more in the long run by using the hybrid drivetrain as intended. 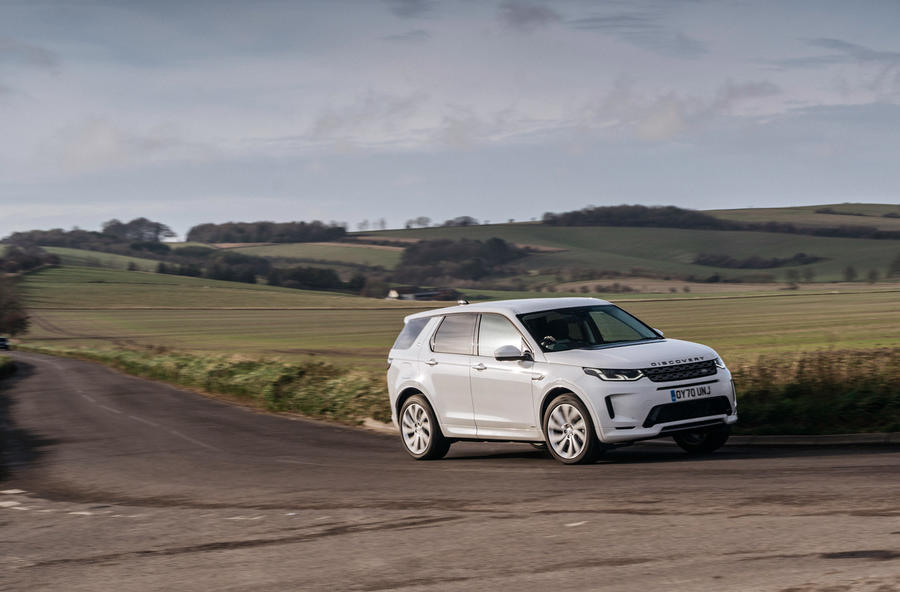 I had the fortune to have been given a Hybrid discovery sport P300 as a courtesy car form a dealership whilst my f pace was having some warranty work done. I agree with previous comments concerning the new infotainment system having a sleek look but requiring precise and often firm touch to engage with. Who at Landrover chose to have a gear shift selector that you pull back to go forward and push forward to go back, am finding this counter intuitive and tbh rather frustrating. As for MPG a full electric charge when carefully eked out gets at best around 34 miles and as for the petrol economy it’s shocking, I drove Manchester to london departing full and arrived with barely a quarter tank! The cruise was on for most the trip set at exactly 70mph (early Sunday morning, you can actually do that) I achieved 28.1mpg woeful as my 3.0 v6 jaguar at the same conditions achieves 41mpg … Landrover, remind me, how am I saving gold finches in Honduras or turtles in Tahiti? That said the car is a pleasant drive with enough grunt not to show you up when needed. Cabin finish.. jury’s out! Could be nicer but I guess is opulence is your thing you move higher up the Landrover food chain.

From what I can see, 30 miles down the road in any bad weather and you have a 2 wheel drive Land Rover.... Expect to see them all stuck?

Thank you PeterS. Exactly what someone who buys one can expect. Luckily you'll be able to hand yours back after 3 years imagine. The private buyers will sensibly avoid all JLR products like the plague. Expensive and unreliable. What a combo!