BACK TO ALL NEWS
Currently reading: The ten best Super Tourers race cars ever
UP NEXT
Worth the weight? Lotus Emira first ride

The BTCC’s Super Touring era was peak motorsport, with strong grids backed by manufacturers. But which were the best cars on the grid?
Open gallery
Close

When it comes to tin-top racers, few get fans as excited as Super Tourers. It’s now 30 years since these iconic machines first turned a wheel in anger, but even now they are remembered as providing some of the most exciting motorsport ever.

Originally created as a relatively low cost entry to touring car racing, over the next decade these machines went on to be some of the most expensive and sophisticated in the world, as well as turning the BTCC into the most popular and important saloon car racing on the planet.

On the surface the rules were simple - the cars had to be series production-based and to have 2.0-litre engines with no more than six-cylinders and rev no higher than 8,500rpm, while (initially) only two-wheel drive was allowed.

At its peak there were 10 factory-backed squads competing, employing some of fastest and best paid drivers in the business, while the closely fought, panel-bashing action and larger-than-life characters behind the wheel meant it frequently pulled in more TV viewers than F1. Put simply, it was the biggest motorsport spectacle in the world.

Here we look back at 10 of our favourites from this incredible era.

There’s an argument that the Mondeo is the car that did for Super Touring in the BTCC, Ford’s deep-pocketed £10 million (around twice that in today’s money) three-car assault on the 2000 title finally persuading rulemakers and manufacturer’s to cry enough.

Prepared by Prodrive, these were some of the fastest and most advanced tin tops ever seen, with each car costing around £1 million in that final season. Yet much of the groundwork had been done a few years earlier by Andy Rouse, who had originally developed the car in 1993. Like the Xedos 6 it used a Mazda V6 (the Japanese firm was part of the blue oval stable back then), but in the Mondeo it was mounted so low and so far back (for better of C of G) that one of the driveshafts had to be routed through the engine’s Vee.

Kiwi ace Paul Radisich used the car to win back-to-back World Touring Car Cup in 1993 and 1994 against the cream of global tin-top talent, plus it was also one that Nigel Mansell drove on several high profile occasions, but it would take that final, multi-million pound effort in 2000 for Ford to finally secure the BTCC title. 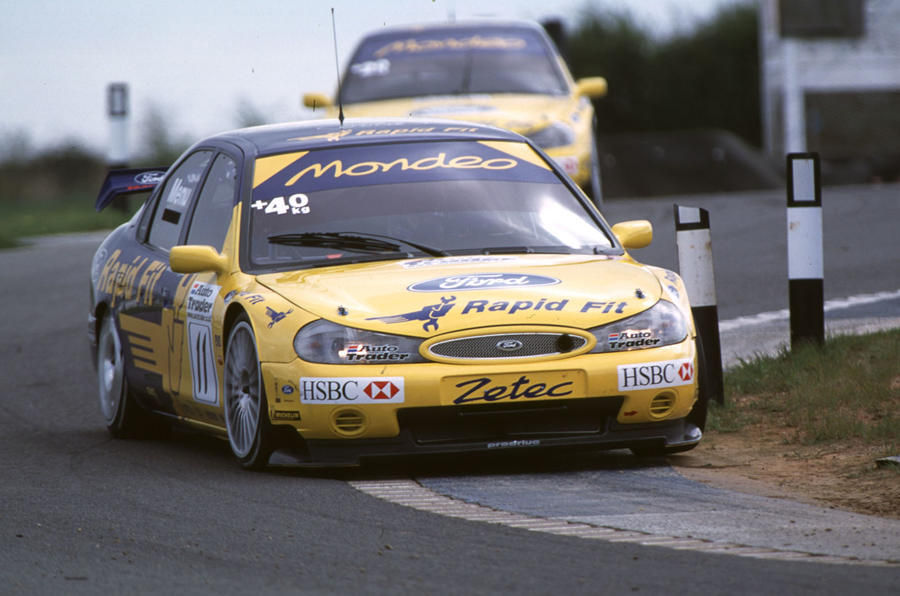 BTCC bosses knew the series had hit the big time when Alfa Romeo launched its multi-million Lire effort with a pair factory-backed 155s at the start of the 1994 season. Not only did it boast ex-F1 star Gabriele Tarquini as one of its drivers, it created immediate controversy by introducing the championship to the dark arts of aerodynamics.

With it’s tack-on and extendable front and rear spoilers (supplied as a bag of parts found in the boot of the limited run, homologation special 155 Silverstone road cars), the wedgy saloons were hard to beat. Legal challenges and race boycotts created action and acrimony aplenty, but the Alfa Corse-prepared cars still managed to romp to nine wins, collecting the manufacturer’s championship and a driver’s title for Tarquini.

At the end of the season they packed-up and went home, leaving Prodrive to run the cars (much less successfully) in the years that followed. 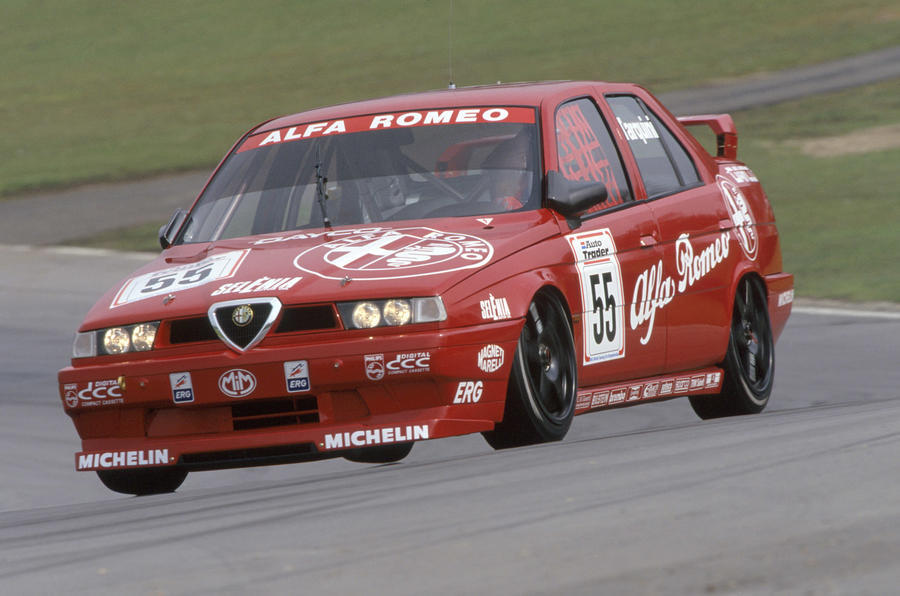 Boxy but brilliant - that’s the best way to describe Volvo’s bold entrance to the BTCC fray. In an effort to make an impact (figuratively, but occasionally literally), the Swedish firm hatched a plan with world renowned racers TWR to develop a circuit-going great estate rather than the usual sober saloon.

First appearing in 1994, the same year as the all-conquering Alfas, the big 850 wasn’t quite on the pace, even with Le Mans legend Jan Lammers and Formula 3 hot shoe Rickard Rydell on driving duties. The long estate bodywork delivered unintended aerodynamic benefits, but the weight distribution was less impressive, the long rear overhang resulting in plenty of oversteer.

A fifth place was the best race result of the year, but the five-cylinder machines had done their job, proving a hit with race goers and getting the brand noticed. The following year they returned with conventional four-door racers and started winning. 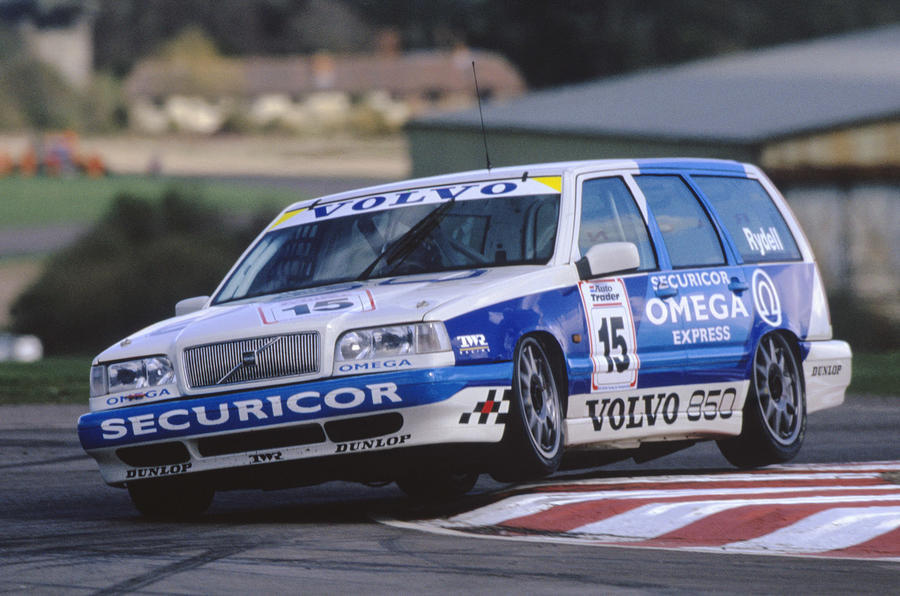 Where to start with the 3 Series? From the first E30 M3 that raced in 1991 (complete with down-sized 2.0-litre S14 motor) through to the Warsteiner-backed Schnitzer four-door E36 of Smokin’ Jo Winklehock, the Bavarian compact exec has been a mainstay of the BTCC. Yet for us, it’s the turquoise and black Listerine-adorned E36 318iS coupe that is lodged deepest in the memory.

Prepared by Vic Lee it not only looked fantastic, it was also fast thanks to the unique use of ABS brakes (subsequently banned for the following year). Tim Harvey ended the year as champion after taking six wins, but it was his tin-top superstar teammate Steve Soper that stole most of the headlines.

On loan from the factory squad, he put in a series of stirring drives through the field over the course of the season, but is best remembered for his part in the legendary, panel-bashing and title-deciding altercation at Silverstone with Vauxhall’s John Cleland, who famously fumed ‘that man’s an animal’ after Soper took them both out of the race. 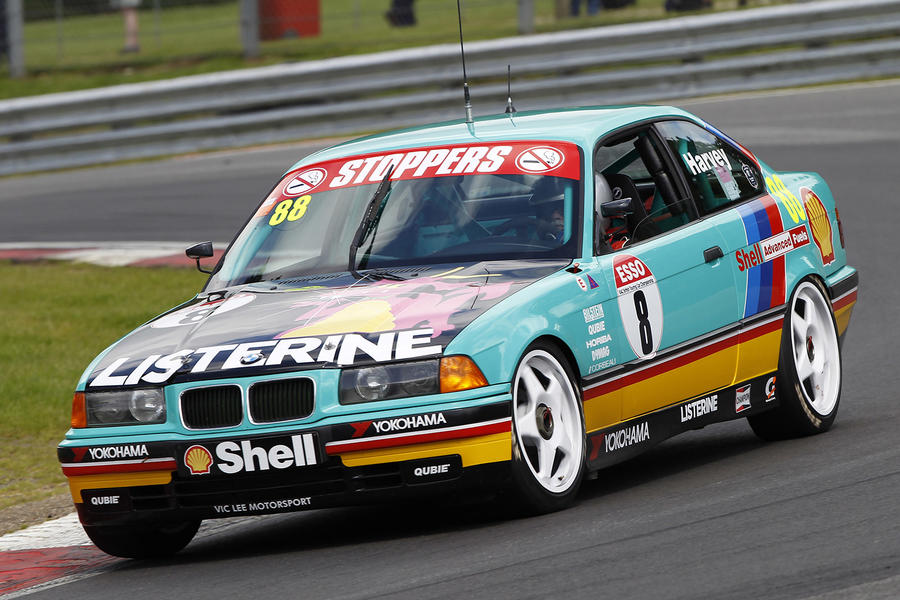 After revolutionising rallying in the Eighties, Audi turned its attention to touring cars in the following decade. Using it’s now famed four-wheel drive technology, its sleek silver A4 quattros dominated their debut season in 1996, with German Frank Biela storming to eight victories on his way to the driver’s title, while Audi Sport UK bagged the manufacturers crown.

With its four-cylinder engine hanging out over the front axle, the A4 had a far from ideal weight distribution, while lobbying by rival teams indignant at it’s unfair advantage saddled the car with extra success ballast half way through the season. Yet it still made a formidable proposition, particularly in the wet. Further weight was added the following year (although Biela still racked up five wins), while in 1998 four-wheel drive was banned completely forcing Audi to go front-wheel drive.

After enduring a winless season and having already proved its point, the team abandoned the series at the end of the year. 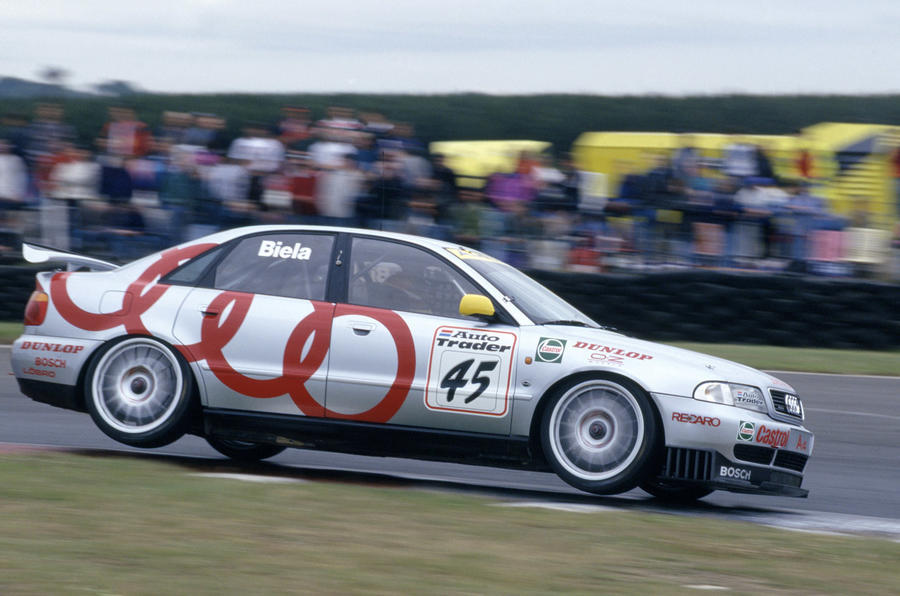 Any doubts about how important the BTCC had become were immediately dismissed when in 1995 Renault employed Williams F1 to run its bid for BTCC glory. Renault had a shaky start to the BTCC in 1993 with its ungainly 19 16V saloon, which was essentially a hastily converted rally car.

The handsome Laguna that replaced it the following year was far more suited to circuit work, winning three events in its debut season. However, it finally found its feet when Williams got involved, taking 10 wins in 1995. Reliability woes and a dominant Audi checked the Laguna’s meteoric rise in 1996, but in 1997 it finally came good, with Swiss star Alain Menu racking up 12 wins and the driver’s title, which in combination with another couple of victories for rookie team mate Jason Plato helped Renault secure the manufacturers crown.

The Laguna finally bowed out at the end of 1999, its 25 wins in six years making it the BTCC’s most successful Super Tourer. 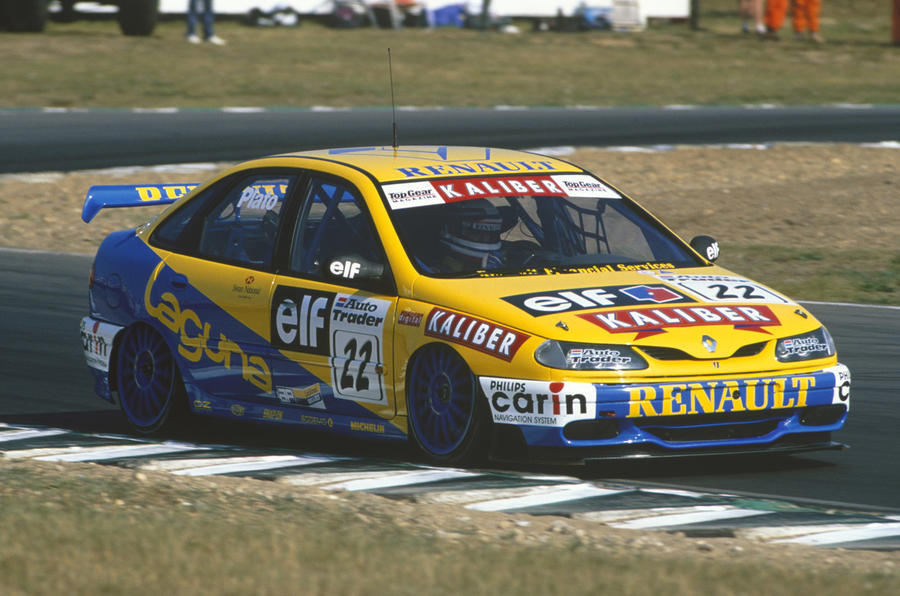 Not one of the most successful Super Tourers, but it was involved in two of the most memorable inter-team clashes. First up was the boxy Carina II developed and driven by Andy Rouse for the first year of the formula in 1991. Quick out of the box it won races in its debut season and again in 1992, when Rouse was joined by defending champ Will Hoy.

However, it was the Brands Hatch round that season which is best remembered, when Rouse and Hoy spectacularly took each other out through the flat chat right hander of Westfield while in pursuit of leader Cleland. The following year Toyota handed over the running of its all-new Carina E to longtime motorsport partner TOMS.

Unfortunately the magnetic attraction between the cars was still there and at Silverstone new recruit Julian Bailey managed to tip the once again unfortunate Hoy onto his roof while both were on for a dominant one-two result.

Vauxhall arguably had a bit of a head start on the competition in 1991, having already run John Cleland to the title in an Astra GTE 16V 1989. Bolstered by its success, Vauxhall launched its Dave Cook-prepared Cavalier in 1990, and although it still ran in the lower category it was perfectly poised for the change to the Super Touring regulations in 1991. Sure enough Cleland took three overall wins and finished runner-up to Will Hoy’s BMW.

Over the next two seasons there were more wins, but the Cavalier was slipping behind in the increasingly aggressive and expensive development race. A switch to Ray Mallock’s team in 1994 proved decisive, with the ultimate 1995 specification car, Alfa Romeo-inspired wings and all, taking Cleland to six race wins and his long overdue second driver’s title. Job done, the Cavalier was retired at the end of the year to make way for the Vectra. 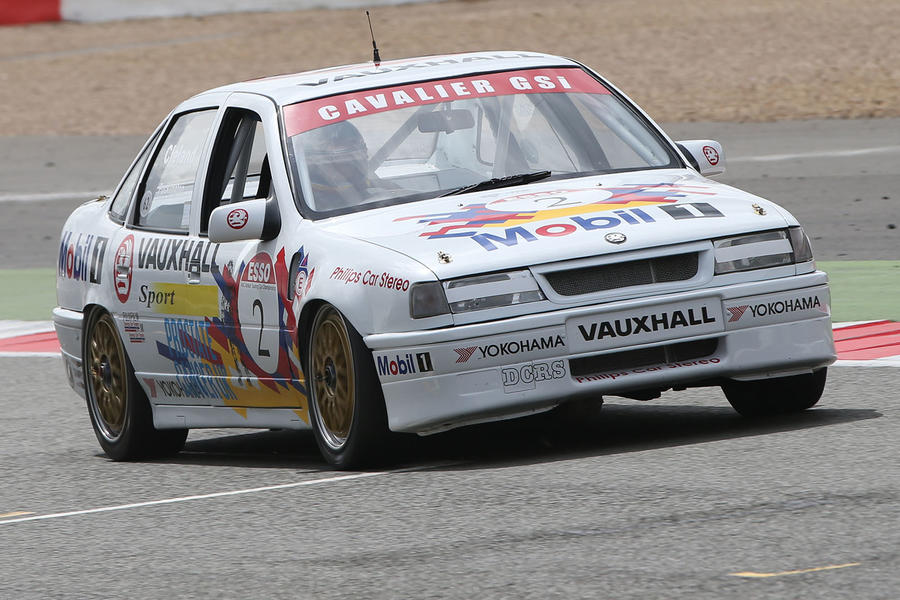 Okay, it was arguably one of the least successful Super Tourers ever to grace a circuit, but the sleek and curvaceous Xedos just looked so good. Resplendent in its purple and yellow paint, and powered by a howling 305bhp 2.0-litre V6 the Xedos certainly looked and sounded the part.

After a stuttering start to its BTCC career in 1992 with the 323F, Mazda turned to its premium Xedos brand for a more concerted stab at the increasingly competitive Supertouring formula. For 1993 it entered a single car for Patrick Watts, who managed a brace of top 10 finishes early on and even secured a pole position start at Snetterton. Yet like its WRC team of a few years earlier, Mazda’s efforts were underfunded, and over the course of the season the Xedos slipped down the grid.

Despite the lack of development it returned the following season with two cars for Matt Neal and David Leslie, but the lack of sponsorship on the now all-white car told a tale. By the season’s halfway point the funds had dried up and Xedos and Mazda were gone for good.

Nissan had been around the BTCC since the early days of the 2-litre formula, the Janspeed Primeras racking up the odd win here and there. But it wasn’t until 1997 and the fully factory-backed efforts of the legendary Ray Mallock squad that the brand hit its stride.

This period in the late Nineties was at the height of the championship’s multi-million pound excesses, with Nisssan up against at least seven other manufacturer teams, and yet its Primera GT managed to win back-to-back titles in 1998 and 1999, with French ace Laurent Aiello taking the driver’s crown in the latter season.

The Primera also gave Matt Neal his first overall win in the series, his victory in the family-run Team Dynamics car earning him a giant £250,000 cheque from championship organisers TOCA for being the first independent team to take a race victory. 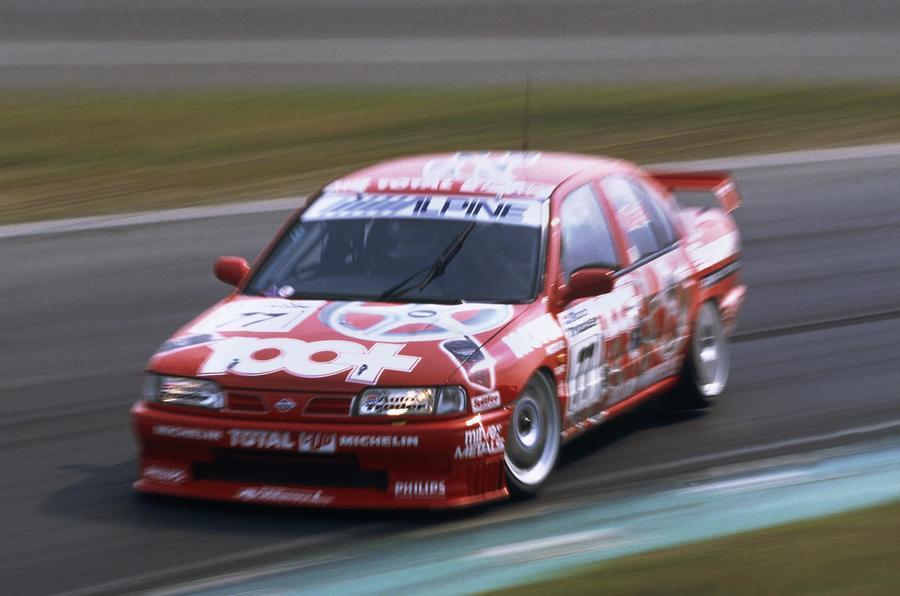