BACK TO ALL NEWS
Currently reading: Why Andrew Jordan stepped away from the BTCC...
UP NEXT
Skoda Kodiaq vRS reintroduced for 2021 with 241bhp

... And is happier than ever. We hear how the British driver has changed lanes to concentrate on his family business and enjoy a spot of historic club racing
Share
Open gallery
Close

Andrew Jordan’s rise to the top of the British Touring Car Championship had been impressively relentless. It all really came together back in 2013, when he secured the title driving a Honda Civic run by the family Team Eurotech. From there his pace, experience and popularity with sponsors led to a seat with the WSR-run BMW squad as team-mate to Colin Turkington.

By the start of the 2019 season, Jordan, by then a little older and wiser, was perfectly placed to challenge for the BTCC crown again – and were it not for a disaster at Donington, he could easily have taken his second title. Instead, a hefty shunt in the opening race, when he was tipped sideways at the Old Hairpin and then collected, wrecked his day. While his title rivals were lining up for race two, Jordan was on his way to hospital to be checked over. Turkington won twice that day and Jordan didn’t score a point, and he missed the title by two points in the final reckoning.

There was sure to be another year, though, and everything looked rosy for 2020. Jordan’s long-time backer Pirtek had called time on its BTCC campaign, but BMW wanted him in the hugely effective 330i and a deal was struck. He had to bring some money to the party, but loyal backers helped conclude the deal. And then the coronavirus struck last March and it all went wrong.

With the start of the BTCC season delayed for around four months, deals were revisited and Jordan found the goalposts moving. Faced with a changed deal that left him exposed to a budget shortfall and the financial risk of accident damage, he had to take a deep breath and rethink his plans. A shunt like the one at Donington in 2019 could wreck Jordan and his family financially. It was a risk he simply couldn’t afford to take, and he had to step away from the BTCC. 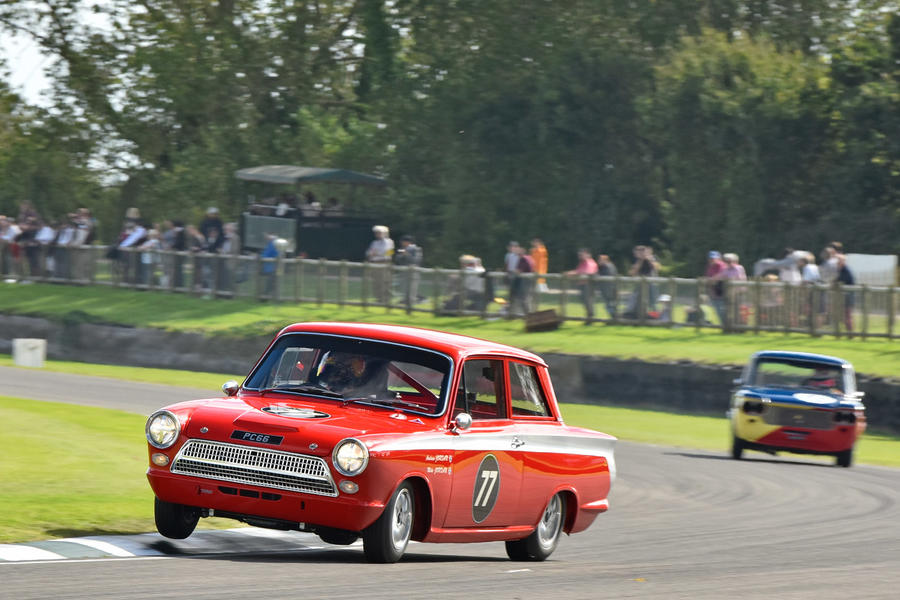 It was a tough call, for he would surely have been a prime contender for 2020. In a compacted season, Turkington was in the title hunt until the final race when Ash Sutton tigered ahead. Jordan watched the season unfold from a distance, yet even that wasn’t straightforward. Jordan and his father, Mike, faced heavy legal action for not being able to take up the WSR drive and they ended up making a significant payment to finally close the door.

Inevitably the whole saga left a rather bitter taste, but Jordan’s standing as an acknowledged BTCC title contender had prompted other offers for 2020 and again for this year. After due consideration, however, he declined, freeing him up to concentrate on the Jordan Racing Team’s ever-growing demand for the build and preparation of historic race cars.

Jordan has long loved the pure driving experience of racing historics and has starred at Goodwood several times in the past when BTCC commitments have allowed. Having a car with no downforce and limited rubber moving around beneath him is his favourite racing experience. Building and running Lotus Cortinas, Porsche 911s, Lotus Elans and AC Cobras for customers is at the heart of the Tamworth-based family business, and having Jordan’s driving skill on tap is a massive plus for customers.

In another twist, however, Jordan was in the thick of the action when the BTCC circus rocked up at Brands Hatch last August. While the headline race teams set up shop in the pit garages, Jordan and his father were in the outer paddock with a slick-tyred, 1300cc Mini Miglia. Jordan finished third, second and first in three fiercely contested BTCC support races, and he absolutely loved it. Jordan takes up the story of his return to Mini racing, a class that takes him back to his competition roots in junior rallycross as a 14-year-old in 2003. 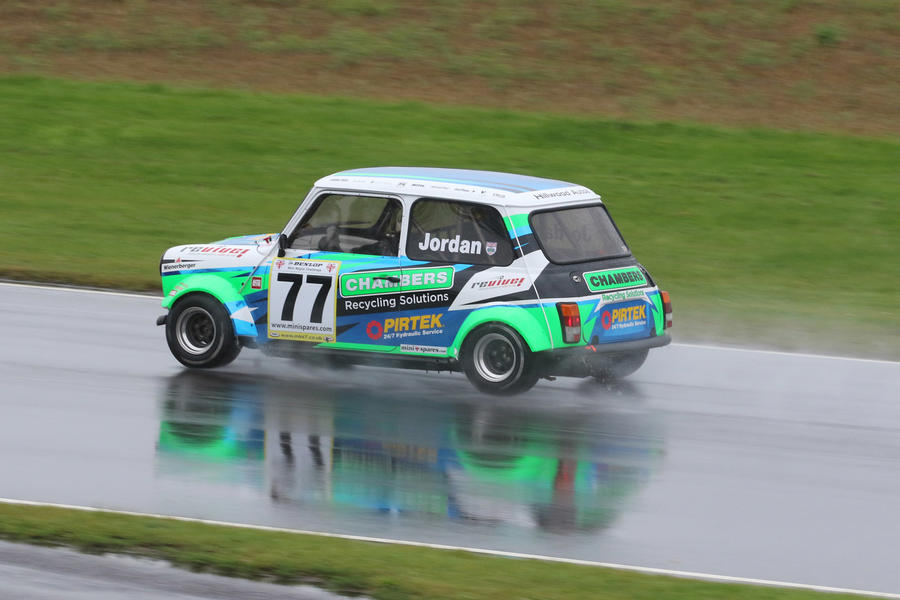 “I’d always fancied a Mini Seven or a Miglia from when Dad was racing TVR Tuscans in the 1990s, and the Minis were support races,” he explains. “It was in the era when Nick and Joe Tandy were racing Mini Sevens, and it has now come full circle.

“I bought the Mini at the time when all the crap was going on with touring cars. We were at Goodwood for a test and the Mini was there for sale. My phone was going all day about the touring car situation, and I just bought the Mini. I’m really happy I did.” Going back to a BTCC meeting to compete in a support race might have been unsettling, but it was one of the few dates he could do last year and the BTCC race meeting TV coverage was a bonus. “We’ve still got partners to look after and the Brands races were on the TV, so it helped keep them happy,” he says. “Over the Brands weekend, the social media interaction I had on the Mini was way more than anything I’d had with the touring car.

“When you are in the touring car paddock, that’s your world and nothing else is going on; in the Mini paddock, there was no bull**** and no politics. We were there with the motorhome and the trailer and it was great. In the Miglias, you get really hard racing: it’s touring car-style racing but with an older car. That’s what I really enjoy.” As a BTCC front runner taking a big step down the racing ladder, Jordan was under no illusions about the challenge he was undertaking. “I knew there were good people in it,” he acknowledges. “Some people might have the view that I’d done touring cars and should go in and wipe the floor with them, because they’re only racing for fun. But I’ve always been brought up to recognise that there are good people in every class, and I knew it would be tough. Wherever you race – and it could be in the smallest club meeting – there will still be someone who will give you a run for your money.”

Jordan’s only other outing with the Mini last year was at Castle Combe in October, when he dominated both races in heavy rain. “It’s all about the fun, but you have some bloody hard racing and have to work for any results,” he says. “I love it. There’s a great group of people in Mini racing.” 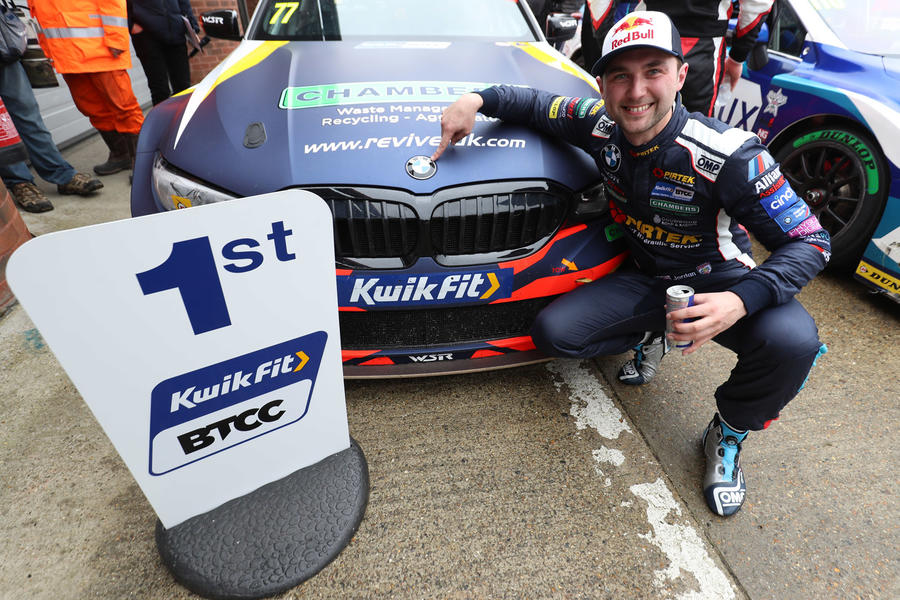 Both Jordans will be on Mini grids this year. Andrew bought his dad a Mini Seven as a New Year’s present, so when they get a free weekend they can both have some fun, albeit in different races. But running customer cars at major historic events inevitably comes first.

“I don’t have to commit to a championship because this will fit around the commitment to customers,” says Jordan. “I’d love to do them all, but if there are only three or four I can do, that’s fine. It’ll be a good car next year and in five years.”

He may be a BTCC champion but Andrew Jordan is first and foremost a racer. He’ll enjoy racing his Mini Miglia at Cadwell Park or drifting an AC Cobra around Goodwood. Right now, getting back into the BTCC is not high on his agenda. Never say never, of course, but for the time being, he’s just enjoying his sport.

Log in or register to post comments
si73 2 March 2021
What a lousy situation, how can you be effectively fined for not taking up a deal that has changed beyond your capabilities to take it up. So was that WSR that he had to pay off or BTCC itself?
Good luck to him, sounds like he is better off out of that championship, one that I always loved watching.