BACK TO ALL NEWS
Currently reading: Audi to race in Formula E as a factory team
UP NEXT
First drive: 2021 Mercedes-Benz EQA 250 prototype

Audi to race in Formula E as a factory team

Audi is increasing its involvement in Formula E, and has partially revealed its livery for the upcoming season
Share
Open gallery
Close
Share story

Audi’s involvement in Formula E is set to increase, with the brand becoming more involved with the Abt Schaeffler Audi Sport Formula E team, and has revealed its livery for the upcoming season.

Although Audi has already lent its name to the team since 2014, it is now providing ‘financial and technical support’ for the team in the 2016/2017 season, which starts on 9 October in Hong Kong.

After this, Audi’s involvement in the Abt Schaeffler team will be a ‘fully fledged factory commitment’ – marking the operation’s transition from a customer team to the official Audi Formula E effort for the 2017/2018 Formula E season.

As a result of the move, Abt Schaeffler Audi Sport’s Formula E cars – the Abt Schaeffler FE02 - will now bear the Audi logo on the sides and rear wings. This will be the main immediately obvious visible change.

Another, more far-reaching change from the new partnership will be the effect it has on Audi’s electric vehicle technologies. It's understood that Jaguar’s recent announcement of its involvement in Formula E will benefit its future electric vehicles, including an all-electric SUV, and it’s the same story for Audi.

Audi’s Stefan Knirsch, Member of the Board of Management, Technical Development, said: “By 2025, every fourth Audi should be an electric vehicle. The first model for this is planned to be an SUV we’re going to present in 2018.

In the light of these plans, adapting our motorsport programme and taking up a commitment in a fully electric racing series is only a logical move.”

With Quattro drive we revolutionised rally racing and subsequently set standards in circuit racing as well. Now we intend to repeat this in fully electric racing. Formula E with its races being held in the hearts of major cities is an ideal stage for this purpose and Team ABT Schaeffler Audi Sport a logical partner for us.”

Other major manufacturers involved in the all-EV racing series are BMW, Jaguar, Renault, DS and Indian car giant Mahindra, as well as up-and-coming road EV manufacturers NextEV and Faraday Future. All of these are either already involved, or have grabbed headlines with future plans for electric models. 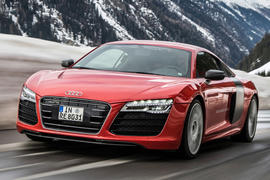 Their expertise in using

Their expertise in using software to break the rules should come in very handy in EVs where software is so important.