Mini's hottest ever hatch aims for front-driven class supremacy. We ride shotgun in one of the first cars off the line
Share
Open gallery
Close
Share story

When it comes to celebrating the 60th anniversary of the Mini, what better way to let your hair down and party like it’s 1959 again than releasing a 160mph tearaway like the new John Cooper Works GP?

To be specific, the third-generation GP is a 164mph tearaway. As anyone that’s followed the Mini’s evolution will know, the range has matured since the evocative name returned to our roads in 2001. And the GP is no exception.

Where the original, supercharged R53 was a handbuilt special that was assembled by Bertone and finished by Mini dealers, its R56 successor was more sophisticated, a car that you could drive to the Nurburgring for a hot lap or five without regretting the decision the moment you hit the first stretch of motorway.

Since Mini showed the latest GP concept at the 2017 Frankfurt motor show, a lot of drivers have dared to dream that the third-generation car might recapture some of the attitude of the original car, which was a bit of a riot on the right stretch of road. That’s because the concept, overseen by Oliver Heilmer, looked for all the world like a TCR touring car. 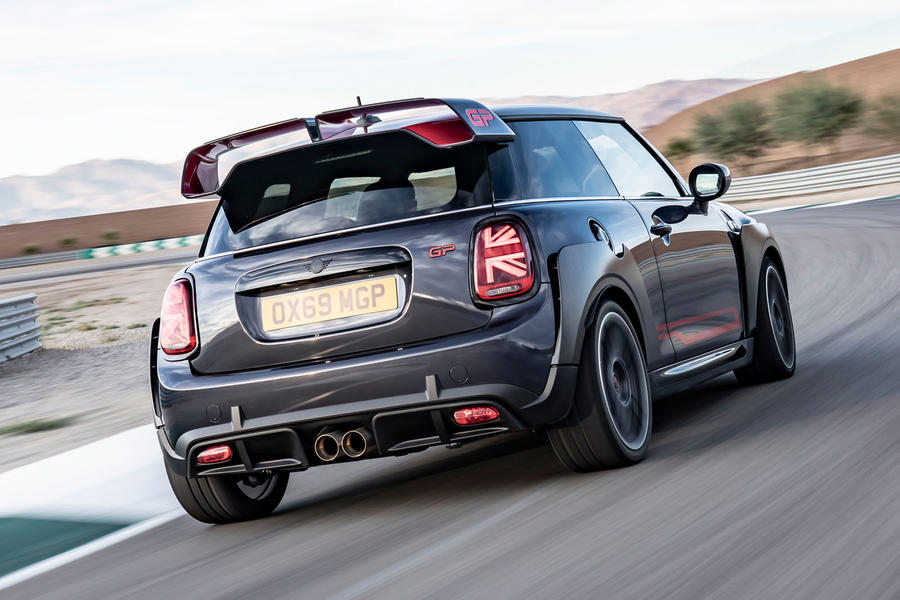 That attitude remains intact for the production model. Each car bears its number on the front wheelarch extensions, which are fashioned from carbon-fibre reinforced plastic of the sort found in the BMW i3. The stance is, well, slammed, and those arch extensions allow for 40mm of extra track compared with a JCW hatch.

The back wing is nearly as large as an original Mini and the neat looking 18-inch alloy wheels wear 225/35 Hankook Ventus tyres, with a choice of treaded S1 Evo Z rubber or semi-slick TD versions.

I drop into the passenger seat of a car wearing the semi-slick tyres. Remember, there’s only one passenger seat in the GP, with the back chairs binned and a bright red brace spanning the space. My driver is Jürgen Metz, who developed the chassis of the latest GP. That could be good news; he has worked on both previous iterations and has benchmarked competitor vehicles including the RenaultSport Megane and Honda Civic Type-R, so should have a feel for what makes a GP distinct.

The acceleration is fast but the engine remains just a tad characterless and nothing like the first GP’s manic little supercharged 1.6-litre unit. With such a flat torque curve, speed builds in a predictably linear fashion, and there isn’t a rush toward the rev limit from the 302bhp motor. Mini says the GP takes 5.2 seconds to get from 0-62mph, and can continue all the way to its top speed of 164mph (no limiter here, thank you very much).

The most noticeable characteristic is the rigid structure. With a front strut brace, the brace in the back of the cabin and strengthening beneath the back of the car, it responds immediately to changes of direction and exhibits a high level of mechanical grip, at least on the semi-slick TD tyres. The return to a mechanical limited-slip differential should help get the driver more involved, but anyone that buys one can no longer get involved in setting up the suspension; the passive springs and damper set-up aren’t adjustable like they were on the last GP.

Will the brakes be up to it? They’re borrowed from the Clubman and Cooper JCW, and those weren’t entirely confidence inspiring on test cars we drove at the BMW and Mini West Coast Performance Centre, at Thermal Raceway, so how well the system will handle the lighter, faster GP remains to be seen. 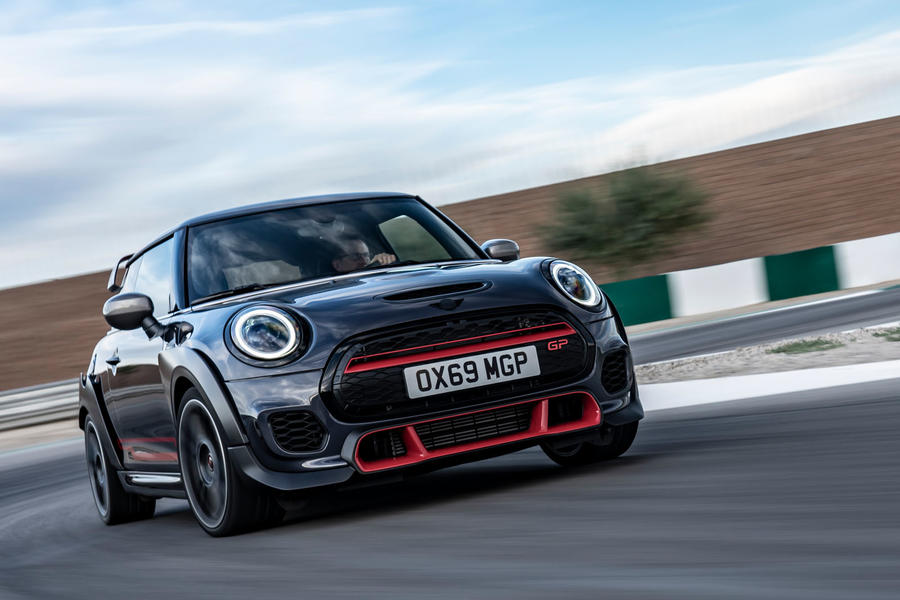 Talking of weight, the GP is only 10 kilos lighter than a JCW hatch, compared with almost 50kg of savings on the first GP. That’s because of the bracing, larger brakes and changes to the cooling systems, as well as the eight-speed automatic gearbox.

It’s not the fastest-shifting transmission. Petra Beck, product leader for the GP defends the use of the automatic unit over a manual gearbox, pointing to the car’s lap time at places like the Nurburging. But surely the point of the GP is how involved it makes the driver feel, rather than what split seconds it’s able to shave from a leaderboard?

A total of 3000 GPs will be built at Mini’s Oxford factory, with 575 for the UK market, and around half of those are accounted for already. During the event, talk amongst BMW executives is of how difficult it is to get low-volume cars like this one through emissions approval. Whether that means this GP might be the end of the road for the most feisty Mini of all is probably something few car enthusiasts won’t want to spend too much time mulling over.

Mini Countryman and Clubman JCW bumped up to 302bhp​