From £18,5157
Mini adds 30% more power to its hot Clubman JCW, making it the fastest Mini ever made. Is that enough to transform it?
Open gallery
Close

More than your usual facelift, that’s for sure. We’re so desensitised by the usual bumper-and-headlight updates that the changes for the 2019 Mini Clubman John Cooper Works might pass you by.

Of course, as with the rest of the Mini Clubman range, that’s exactly what you get. However, as well as a distinctive front splitter  – and a bumper with more gaps for cold intake air to pass through – the six-door JCW gets a substantial engine upgrade.

Gone is the 228bhp 2.0-litre motor – frankly critiqued as “tediously adequate” when we first drove the outgoing JCW in 2016. It seemed Mini agreed – one engineer on the new car’s launch told us it was “a JCW in name only”.

So in comes a new engine of the same size and cylinder capacity, but with power bumped up to a far more tantalising 302bhp. If that power figure sounds familiar, it’s because its the same engine that BMW has dropped into its newly front-driven, platform-sharing M135i. It makes this the fastest and most powerful Mini that’s ever seen production. 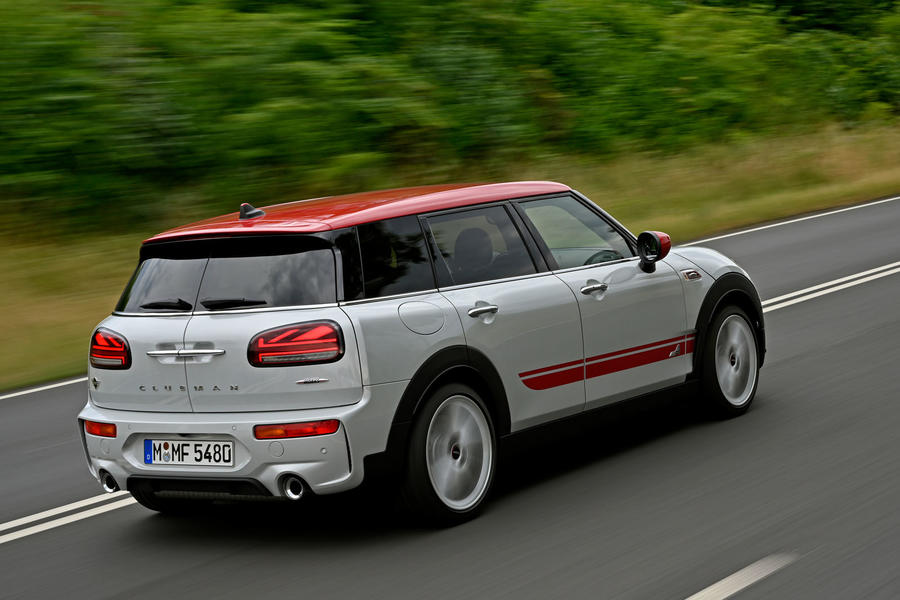 Of course, you don’t add 32% more power and just bung the thing on sale as is. The hottest Clubman receives more rigid axle components, new swivel bearings to alter the front wheel camber, tweaks to the mountings and new spring and damper rates.

There’s also beefed-up four-piston rear brakes, reinforcement to the body structure and a louder exhaust system. Extensive enough for you?

That tally of alterations should whet the appetite of enthusiasts, but they’ll be needed given how underwhelming the old JCW was – its mediocre performance meant it barely justified the not insubstantial premium over the regular Cooper S.

However, it doesn’t take long to appreciate the welcome improvements here. It now has the straight-line pace to challenge the hot hatch elite that surrounds it at this price point - Mini nominates the Mercedes-AMG A35 as its main competitor here.

Power from the reworked 2.0-litre engine leaps to a gratifyingly competitive 302bhp – enough for a sub-five second 0-62mph sprint. A stint on a quiet autobahn saw the new 155mph limiter – the first needed on any Mini - reached with little drama, with what felt like a bit more in reserve.

While its standard eight-speed automatic 'box and unflappable all-wheel drive means it pulls away in the same undramatic yet ruthlessly efficient way as a VW Golf R, you now get a good shove in the back and the punchy top-end that was sorely lacking in the old car.  Put simply, the performance gap between this and the Cooper S is obvious and welcome. 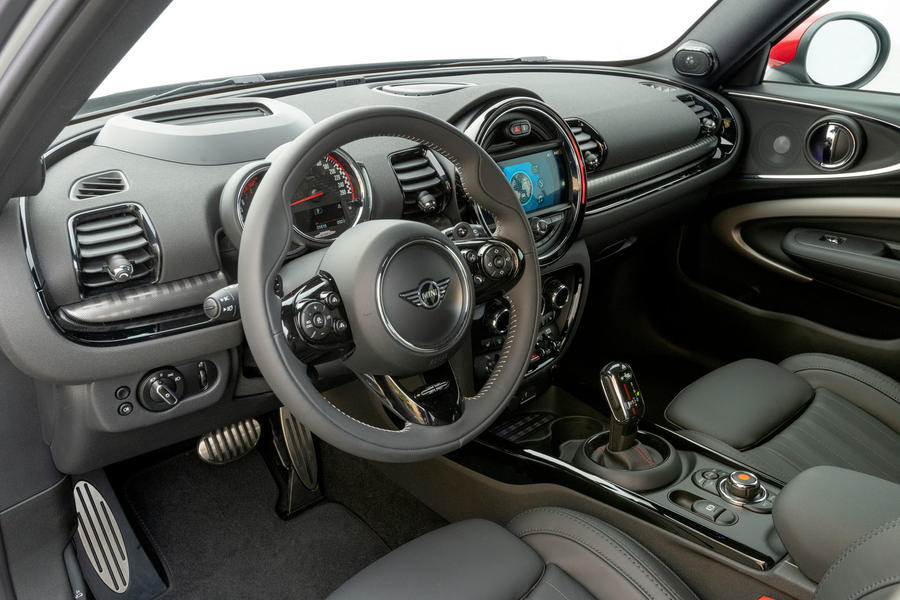 It even sounds pretty good - not as not as in-yer-face as something like a Hyundai i30 N but raucous enough to give it en edge. In terms of potency, only the extra interaction afforded by a manual gearbox (not offered, as is becoming the norm, because it wouldn’t really sell) would further increase the sensation of speed.

Despite the thorough chassis hardware revisions detailed above, Mini engineers state the aim wasn’t to radically alter the way this car handled. So the hottest Clubman still majors on secure grip levels and stable body control rather than outright entertainment.

Grip of the unstickable kind is the order of the day here: throw the JCW into a bend and it turns in keenly, the Michelin Super Sport tyres beginning to squeal without it relinquishing your chosen line, which it holds tenaciously when powering out thanks to a proper mechanical diff.

Unfortunately, finding that line still take a bit of trial and error, owing to the Clubman’s overly darty, responsive steering. With Mini preferring an immediate feel rather than a gradual build-up around the dead-ahead, it can be difficult to turn pick a cornering line with confidence without making frequent small corrections. Such aggressive responses increase the feeling of agility, but would better suit a small hot hatch than something with this much mass.

Once you’ve spent some time getting used to this, the feel becomes more familiar, and you can adopt a flowing style which we suspect would resort in crushing cross-country, all-weather ability. Through the smooth, flowing corners and in the high-thirties temperatures of our German test route, however, there’s still a nagging sensation you could be having more fun in cheaper, front-driven rivals.

There remain significant snags that stop it being a consummate all-rounder, too. Our test car came fitted with the optional adaptive dampers and smaller 18in wheels, but even on well-surfaced German tarmac the low-speed ride is taut for the most part and somewhat crashy over the worst imperfections. The upside is impressive body control and damping at speed, of course, but we’ll have to wait for a go in the UK to judge the balance for certain.

It's also not entirely clear where the Clubman sits in the family car mix. The six-door estate will sell for its distinctive design and side-hinged rear doors alone, but, in terms of outright carrying capacity, it’s no roomier than a hatchback such as the A35. Those rear doors, fun though they are for the first few uses, also obstruct rear visibility more than a little bit.

If something like a Volkswagen Golf R or BMW M135i is too straight-laced for your liking, we reckon the Mini Clubman JCW is definitely worth a look. It’s a considerably better car than the one it replaces, albeit still something of a left-field choice.

It’s around £3,000 more than the outgoing 228bhp model, which seems fair enough given the power boost. But once you’ve ticked a few choice boxes on Mini’s endless option programme – as most customers are expected to – you’re looking at £40,000.

There are better all rounders in this segment - its BMW Group sibling, for example, trades a bit of visual character for a more polished interior, while the Golf R is ahead in terms of ride and refinement, with similar levels of handling prowess.

The Mini Countryman, also now available with with the same powertrain in JCW form, is also a more practical offering. But the Clubman hasn’t been designed purely to tick objective boxes. And, crucially, this is finally a Clubman that feels like it deserves to wear the John Cooper Works badge. 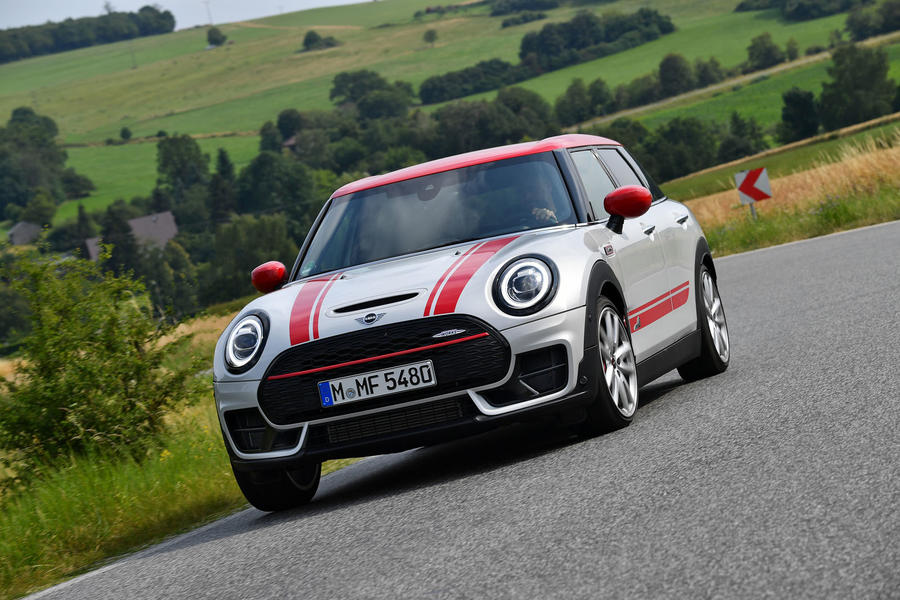 its still fugly, and I suspect a lower powered, cheaper Focus ST would leave it for dead around a track..