BACK TO ALL NEWS
Currently reading: New Cupra Ateca: pricing announced for 296bhp SUV
UP NEXT
Quarter of UK cars produced in April were electrified

Seat’s new stand-alone performance brand, Cupra, has announced pricing and spec details for its hot Seat Ateca SUV. The all-wheel-drive performance model starts from £35,900, with deliveries due early next year.

The headline price gets you a 296bhp 2.0-litre turbo petrol engine mated exclusively to a seven-speed dual-clutch transmission. Standard kit includes keyless entry and start, an 8.0in touchscreen navigation system, park assist and a wireless phone charger, while metallic paint with a choice of six shades is thrown in, too.

The price is inclusive of the Cupra Care service and maintenance package, including three years of servicing, European roadside assistance and the car's first MOT. 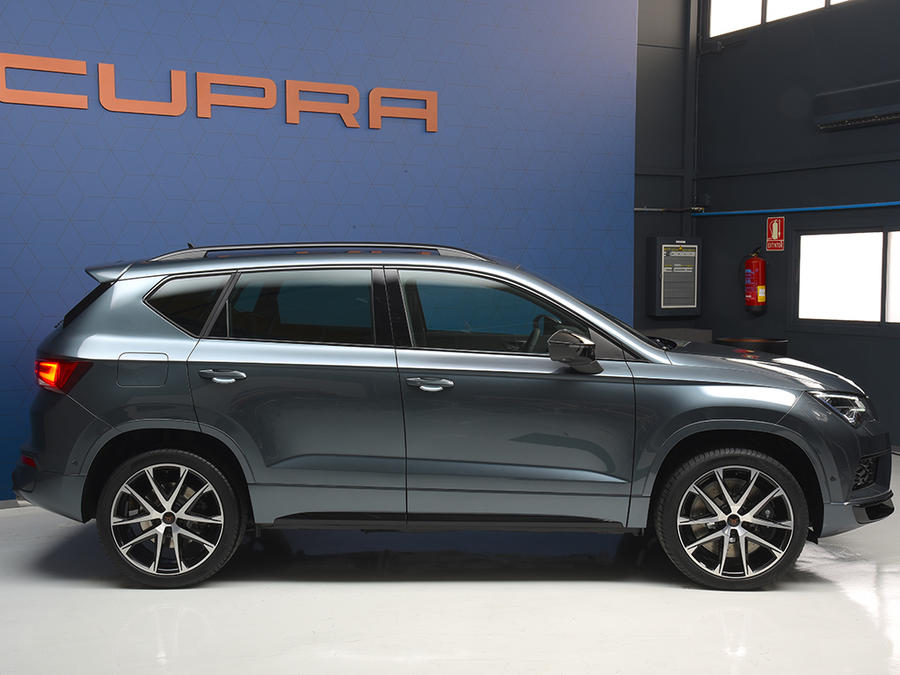 The Cupra Ateca is part of a broader offensive to offer Cupra versions of some Seat models as well as, eventually, Cupra-only cars. Seat is trying to copy the example of in-house performance divisions like Renault Sport. It will launch seven models by 2020 as part of aggressive growth plans.

While the initial models will be reworked versions of current Seat machines, with Cupra Ibiza and Arona models likely in 2019, the firm hinted that it could introduce stand-alone Cupra models in the future as part of plans to use the brand as a technological figurehead.

The brand's sales and marketing boss Wayne Griffiths said that splitting from Seat was important for brand value. "In terms of positioning it adds more to go with a separate brand," he said. "If we kept it in the Seat world, there would always be compromises. We want to take it out of the Seat world to the race track. Most firms that have sporting brands take them out of heritage, like Abarth. But we want to look to the future.

Opinion: Why Cupra split from Seat

Cupra models will be based on Seats – for the foreseeable future, at least – but with significantly higher performance, more customisation options and a separate sales channel. Only about one-fifth of Seat’s dealer network will be awarded Cupra sub-franchises and models are set to be sold by specialists from Cupra-only areas. 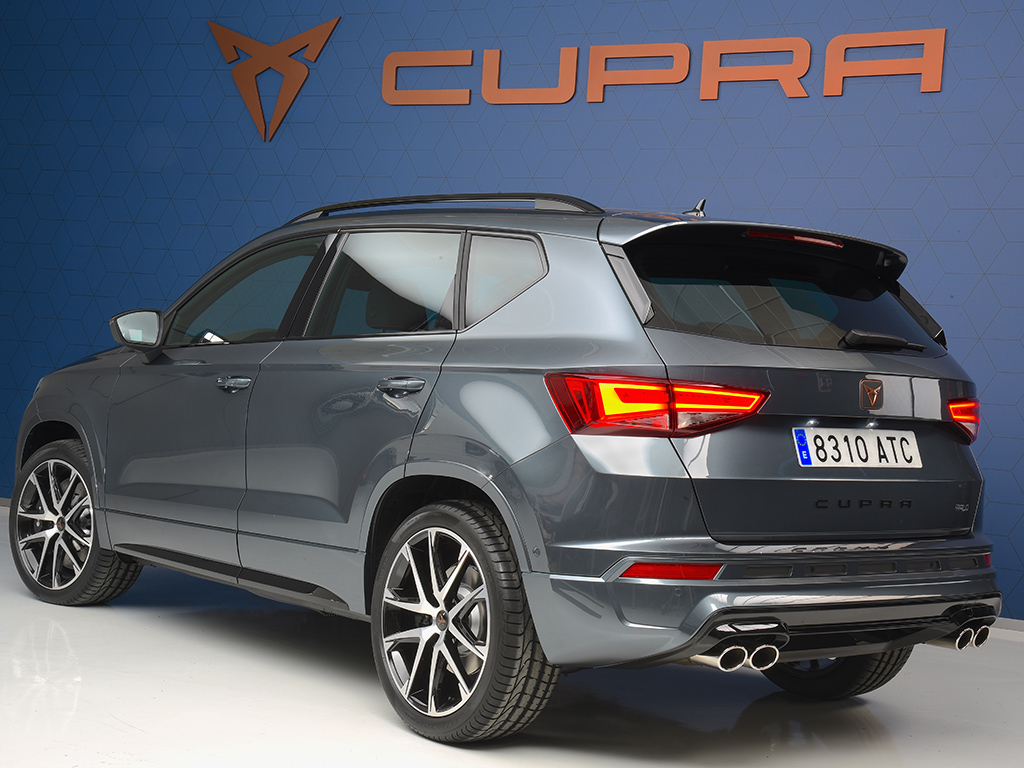 Autocar first reported on the plans last year, when a draft of the new logo was shown in trademark filings. Seat boss Luca de Meo later admitted that Cupra would “add another dimension” to Seat’s appeal.

“Cupra emerged not just as a business discussion," he said. "This is a declaration of love for motoring, in a society becoming a bit unfriendly to the sector.”

The Cupra Ateca is powered by a 296bhp version of the Volkswagen Group’s EA888 2.0-litre turbocharged engine, although the torque peak of 295lb ft is higher than that produced by the similar engine in the Leon Cupra 300. Drive passes through a seven-speed dual-clutch gearbox – there are no plans for a manual version – with torque diverted rearwards when required by a part-time Haldex all-wheel drive system. Cupra claims a 5.2sec 0-62mph time and a 153mph top speed.

Although its components are almost all familiar from other members of the VW Group’s vast MQB-platform family, the Cupra Ateca is said to have been tuned to offer a substantially different driving experience from its Seat sibling. 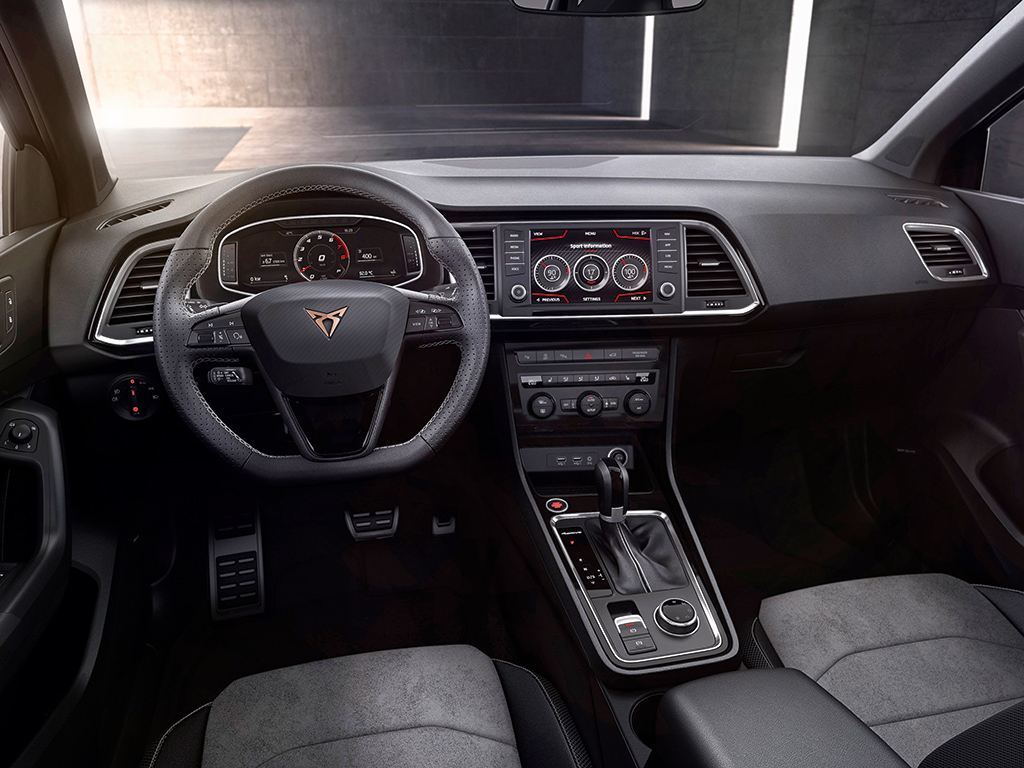 The suspension height has changed only fractionally, with the Cupra sitting 20mm lower than the regular car, but spring rates have been substantially revised and suspension settings are far firmer. Adaptive dampers will be standard, allowing for a far more aggressive set-up when using the ‘Cupra’ setting, which has been added to the Ateca’s switchable driving modes.

Cupra sub-brand could get latest powertrain tech before Seat

The Cupra has also ditched the electronic sound symposer that normally augments engine noise in rortier MQB models. Standard brake discs will be 17in, but 18in Brembo units will be offered as an option.

Although badges have been changed from the Seat ‘S’ to Cupra’s new triangular logo, the exterior design builds on that of the regular Ateca rather than transforming it. Bumpers are bulkier and there is a small wing at the top of the tailgate. 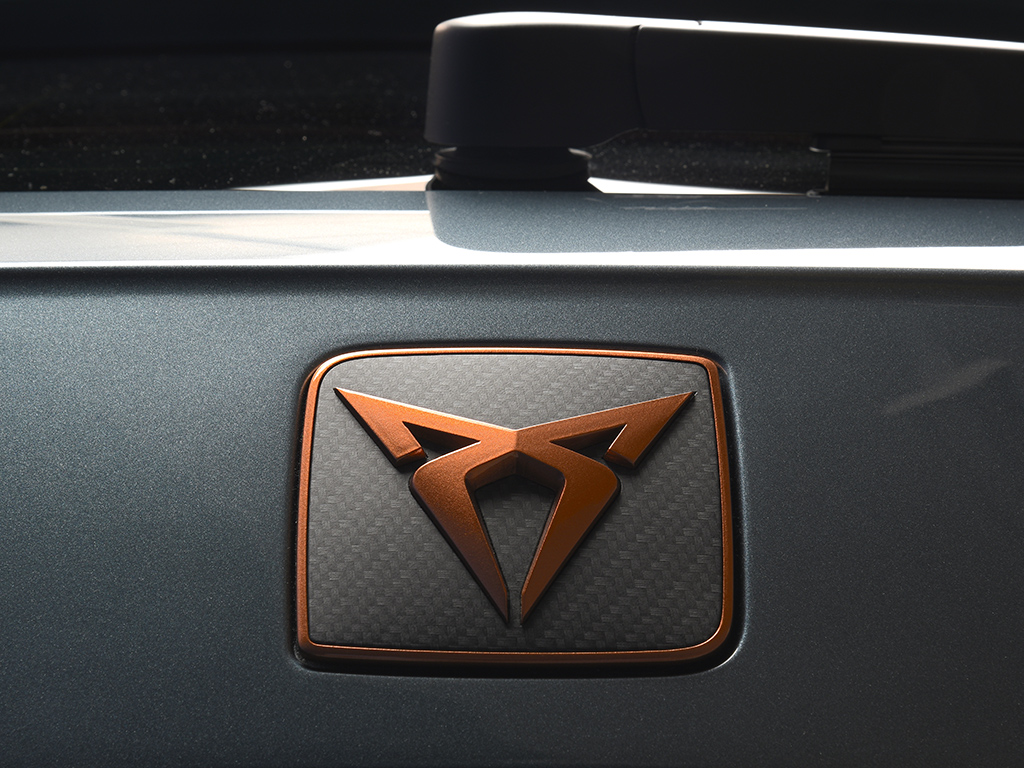 The Cupra gets 19in diamond-cut alloy wheels as standard plus the option of several unique colours. There will also be external and internal carbonfibre trim packages. The interior uses lots of Alcantara and incorporates plenty of copper details – Cupra’s new corporate colour, a move away from the brasher orange with which the name was formerly associated. Other Cupra models will follow hard on the heels of this Ateca, with design concepts for Cupra versions of the Ibiza and Arona shown alongside it at the official launch. The company line is that these are to gauge reaction rather than indicate production intent and Seat’s R&D boss, Matthias Rabe, has indicated that the Leon will be the next production version.

Rabe also confirmed that Cupra’s birth as a brand will make it easier to produce limited-run models and higher-performance variants in the manner of the Leon Cupra R. No new diesel Cupras are expected, but there will be Cupras that use forthcoming mild-hybrid powertrains.

Rabe said it’s possible there will ultimately be a Cupra-only halo model, but there are no immediate plans for one. “In the first years, you will have derivatives,” he said. “If you are talking about a very special car only for Cupra, I could imagine a sports car or a spider or something like that but, to be honest, we don’t have that on the plan. It could be an aspiration for the longer term.” Seat sold fewer than 10,000 Cupra models last year and the aim is for the stand-alone Cupra brand to double those volumes within five years – a modest ambition given what will soon be a multi-model line-up.

At the Cupra launch event, a new Seat Leon Cupra R ST estate was shown (below). The all-wheel-drive machine is powered by a 2.0-litre 296bhp RSI engine, and sits alongside the existing Seat Leon Cupra R. For consistency, both models will retain Seat branding, although from now on they will feature a copper Seat logo and other special trim. 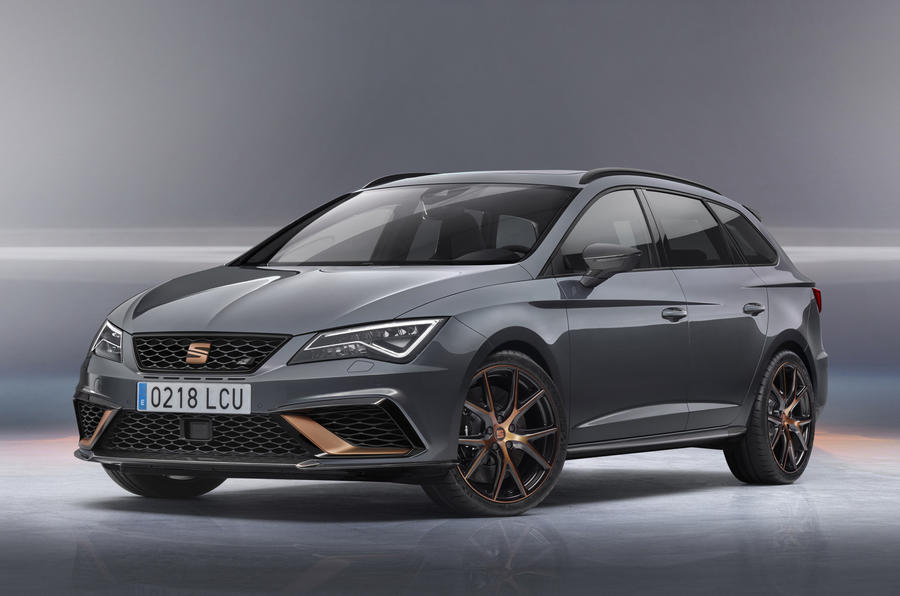 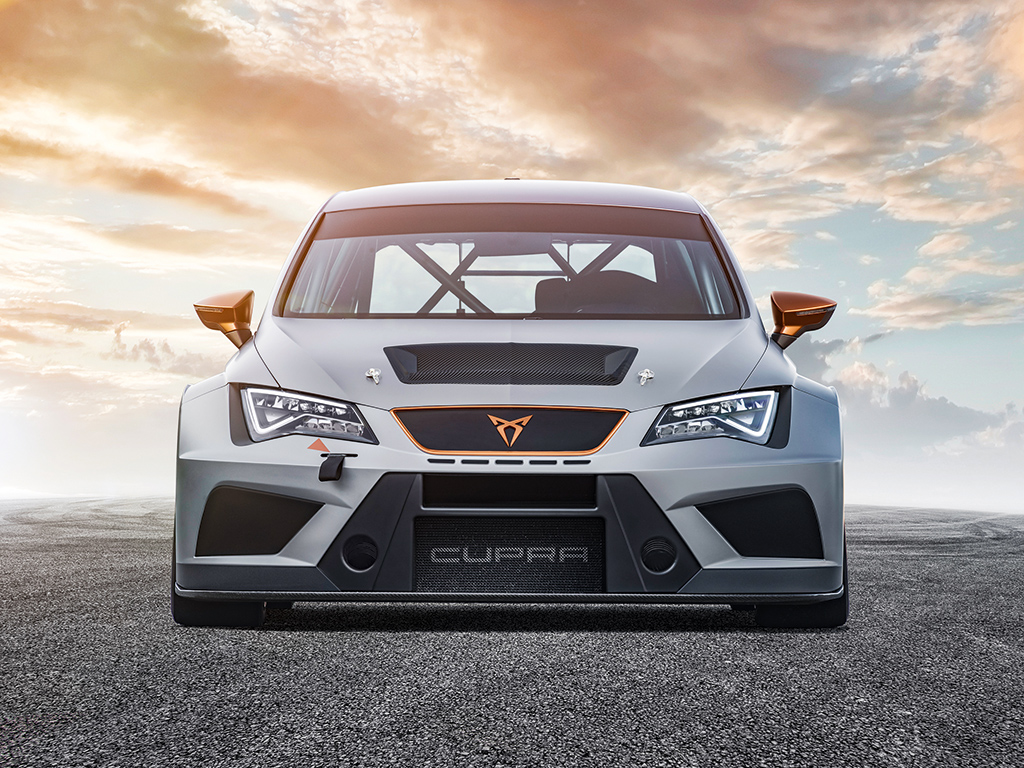 Cupra has confirmed the Cupra TCR will be the first motorsport machine under its new brand remit. Heavily based on the 2017 Seat Leon TCR from last season, it will run in the new FIA World Touring Car Cup as well as in national-level TCR series.

Talking about a heap of shit?

You talk about a heap of shit and when you have a photo of the biggest heap of shit ever in the history of the planet as part of your signiture photo.
3mocion 13 October 2018

Talking about a heap of shit?

Bowsersheepdog- You talk about a heap of shit and when you have a photo of the biggest heap of shit ever in the history of the planet as part of your signiture photo.
simonali 14 October 2018

Bowsersheepdog- You talk about a heap of shit and when you have a photo of the biggest heap of shit ever in the history of the planet as part of your signiture photo.

Beaten to it. Twice.

Bowsersheepdog- You talk about a heap of shit and when you have a photo of the biggest heap of shit ever in the history of the planet as part of your signiture photo.

The 6R4 was a proper rally car, don't see how you compare the two, as for biggest heap of shit ever, it was a very competetive rally car in a class that was cancelled due to being too dangerous/extreme.

Surely if you want a premium sports branded car from vag you'd get an audi? This should be just SEAT as they were meant to be the sporty arm of the non premium vag manufacturers. Perhaps then it'd look a little less tacky? And sporty suvs? The sports in suv is meant to imply sporty lifestyle not a sports car.

So expensive for a non

So expensive for a non premium brand running generic across the board technology. VAG getting is getting greedy now
bowsersheepdog 25 February 2018

In no way sporty

The logo looks like a question mark and an "S", raising the thought "why SEAT", to which the reply is if they think that fat-arsed Ateca lump of shit is representative of performance, no reason at all.  If they think they can pass that heap off as sporty, they'd probably reckon that Andy Fordham looks like a typical Olympic sprinter.  Clearly they designed the horror in the expection that there is a market for tacky, and are hoping that they won't go broke by underestimating the taste of the public.