From £25,4958
Share review
Seat's new hardcore hatchback impresses on many fronts and is the best of the hot Leon bunch, but the Cupra R isn't quite as engaging as the cheaper Honda Civic Type R
Share
Open gallery
Close

Militant in matt black or grey, the latest Cupra R is a new high-water mark for fast Seats. Limited to just 799 examples, it represents the most powerful road car the brand has built, and the culmination (for now) of a procession of increasingly hardcore Leon variants.

The mechanical setup will be familiar to many, Volkswagen Group’s turbocharged ‘EA888’ 2.0-litre TSI driving the front wheels through a six-speed manual gearbox that remains unchanged from the previously most potent Leon, the Cupra 300. Developing 306bhp from 5800-6500rpm, on paper this engine is an identical sibling to the thunderously effective unit found in the trackday-ready Volkswagen Golf GTI Clubsport S.

The Cupra R has 10bhp more than the Cupra 300, channelled through the same electronic locking differential. But it gets unique adaptive dampers, which along with the steering and throttle mapping are changeable through five selectable modes, including a new Cupra setting.

Styling enhancements include wheelarch extensions that shroud wider tracks, front and rear. There are also numerous new parts fashioned in carbonfibre, including a snow-scraper of a front splitter, side skirts and a neat rear spoiler with a corresponding diffuser below it. Meanwhile the front intake blades, 19-inch wheels, door mirrors and various badges – inside and out – are thrown into relief by a copper shade of paint. Consider also the paint finish on our test car and you’ll be hard pushed to find a more divisively styled hot hatch.

The interior is rather more prosaic, with little more than an engraving of the car’s production number on the transmission tunnel, further copper accents and a pair of heavily bolstered seats. In fact the most noticeable – and welcome – change is the use of Alcantara trim for the steering wheel and gearstick, and Seat’s engineers have been keen to point out that this car is quicker than the stripped-out Cupra 280 Sub8 despite retaining all the normal model’s mod cons, from radar cruise control to an 8.0-inch touchscreen.

British buyers get the Leon Cupra R with a manual gearbox. Other markets – of which Germany will be the largest – have the option of a seven-speed dual-clutch transmission, for which the engine sacrifices 10bhp. The matt paint is also not for UK consumption (Seat won’t say why) – we’ll get a choice of either black or grey. 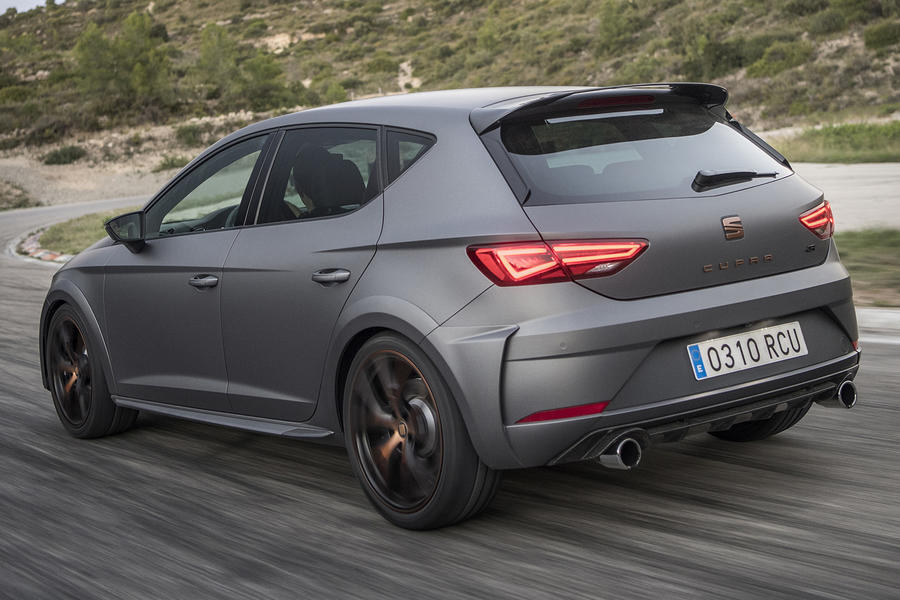 Our time in the car was short but long enough to determine that the Cupra R is a noticeable improvement over the Cupra 300. And as well you might expect, with its extrovert body kit and a price tag to match.

The powertrain remains a triumph, its turbocharged engine responding not only without delay but also with proper muscle to any opening of the throttle above 2000rpm. That the same engine can generate peak power just 300rpm short of the red line shows what a superb piece of engineering the EA888 is. Not many rivals exhibit that kind of breadth, and as such aren’t nearly as thrilling to wring out, even if several of them do offer a little more charisma.

Seat has, in fairness, done a good job of giving this engine a little more character than we’re used to from its previous applications, not least in the Golf R, and has done so without wafting synthesised tones into the cabin. This is largely because in Cupra mode the exhaust forcibly crackles on the overrun but feels entirely natural. Get some heat into the system and it's especially enjoyable.

Handling? New suspension uprights have allowed negative camber to be increased – doubled, almost – at both axles, and while the Cupra R will come shod as standard in Continental SportContact6 tyres, our test car wore Michelin Cup Sport 2 tyres.

Although impossible to separate the individual consequences of those modifications on the Catalan roads of our first drive, the combined effect was profound. Within the limitations of road driving, the Cupra R would seemingly splice through any corner at any speed you cared to throw at it short of the truly deranged. The variable ratio steering has also been quickened a fraction just off centre, and now has a touch more weight to it – something owners of the Cupra 300 would undoubtedly welcome.

Overall, the car’s agile chassis felt very neatly damped, allowing the tyres and differential to do their best work. Whether the Cupra R can replicate these traits on UK roads – upon whose changeable surfaces it will almost certainly be better off wearing the less sticky Continentals – we’ll have to wait and see, but there’s nothing to suggest it won’t cope impressively well.

One area in which Seat has failed to address a Cupra 300 bugbear reveals itself when the time comes to scrub off the immense speeds it’s capable of amassing. The Cupra R comes equipped with mammoth 370mm front discs as part of a setup supplied by Brembo, and while brutally effective they’re still over-servoed and the calipers (which, admittedly, look superb in black) grab spitefully hard at the top of the pedal travel.

This is a disappointing, not to mention surprising, oversight, and not only because of the criticism that’s been aimed at the older car. A key weapon in the arsenal of great hot hatches is an enthusiasm for being thrown into bends on a late and trailing brake. To exploit this trait in a car that goes as rabidly fast and grips as grimacingly hard as the Cupra R does, you simply have to have confidence in a progressive setup. 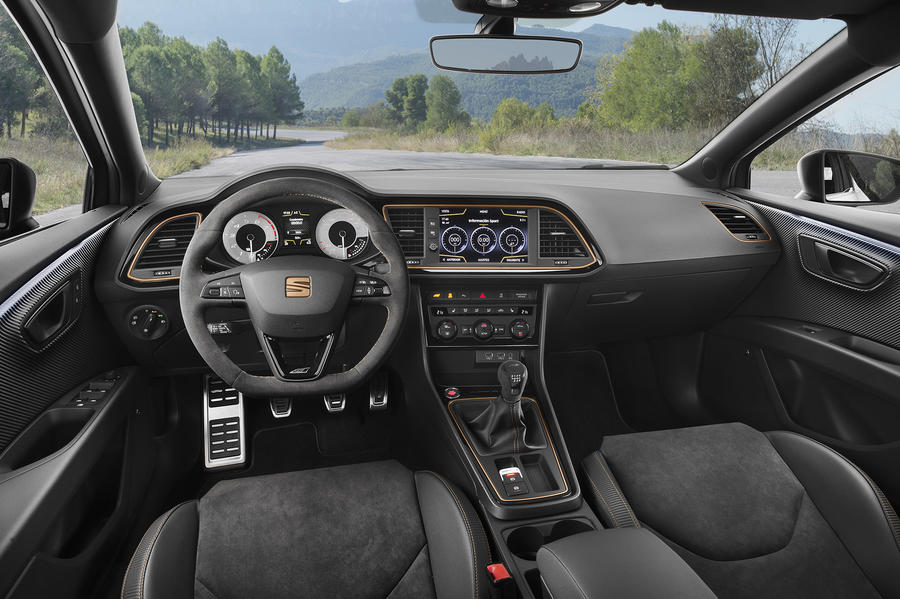 Whether you should seriously consider a Leon Cupra R will depend largely on your commitment to the brand. After all, no one will deny that this new model’s myriad tweaks deliver an enticing improvement to an already fine hot hatch, but the asking price is difficult to swallow.

For Seat die-hards, the car’s eye-widening cross-country pace and the exclusivity on offer – just 24 cars have been initially allocated to these shores – may well prove irresistible, and it’s doubtful such people would be disappointed in their purchase.

Others will peruse the classifieds for an alternative of similar ability and desirability. They will happen upon lightly used examples of the hardcore VW Golf GTI Clubsport S – itself of severely limited production – that start from around £36,000. In such cases the only pertinent question one should ask oneself is how badly do I require the back seats in the Leon.

Of course, the Golf still means spending the best part of £40,000 on a front-driven hot hatch, and that simply won’t wash for most. Inevitably the latest Honda Civic Type R enters the fray at this point. It’s comfortably as fast as the Cupra R, easily matches if for character and surpasses it for involvement and sheer dynamism. It’s also considerably less expensive. 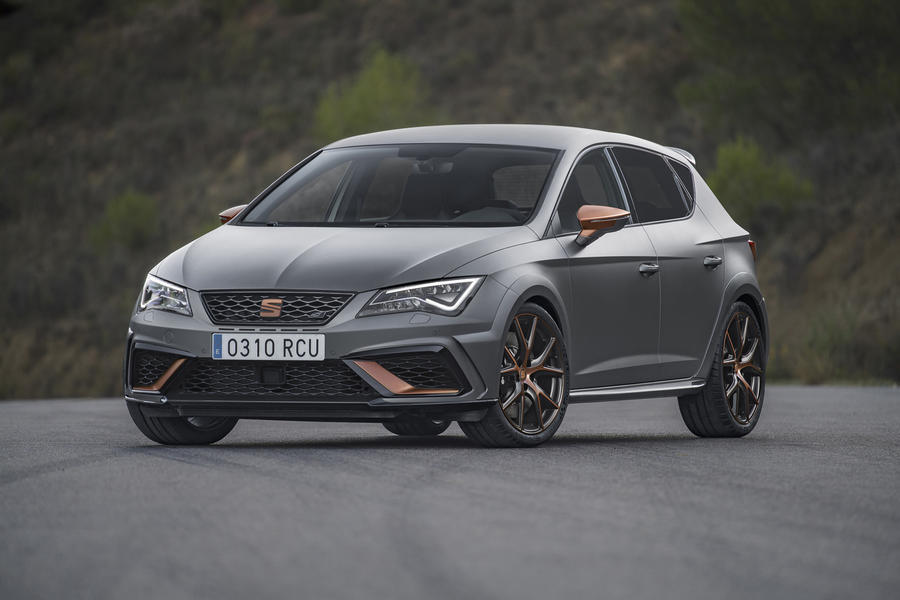 Trouble with this car in the

Trouble with this car in the UK is you just can’t effectively put 300bhp down through the front wheels in damp/wet conditions which, lets be honest, is most of the time! I got tired of wheel spin and torque steer at 200bhp so moved to a Golf R. There’s a reason why manufacturers are moving to 4wd (even latest M5!!).

Why is it not electric.

Surely electric cars would smash this to pieces. Not figuratively, but actually. Like bash it up. I can see Elon musk with a hammer on a pedestal beating this to pieces in a straight line.

This post makes about as much sense as many of the posts on electric cars.

..the Cupra R isn't quite as engaging as the cheaper Honda Civic

Maybe, but it's a damn sight better looking!