The ever-popular Kia Sportage has now joined our long-term fleet, we put the mid-spec 2.0 CRDi KX-3 manual to the test
Open gallery
Close

It’s always good to have a Kia on our long-term test fleet. Especially a Kia Sportage, the mid-sized soft-roader now so popular with British buyers that it accounts for a quarter of all Kias sold in the UK.

The company updated its best-selling model in February and demand has swollen so much that you now can’t own one unless you’re prepared to join a 16-week waiting list.

Why is it so important to run a Sportage? Because this best-looking model in the entire Hyundai-Kia model line-up (my opinion) not only underscores the Korean group’s everpresent potential — Hyundai-Kia is now the fourth largest global car maker, beating Ford — but the Sportage is also one of the best examples yet of the way great styling drives sales.

Seven years ago, this was the first Kia to benefit from the revolution brought by ex-Audi designer Peter Schreyer, hired to change things in Korea. Ever since, the company has been doing great business selling Sportages to people who simply saw the car in the street and wanted one themselves, regardless of the badge on the nose. Badge snobbery may still affect the Cee’d and its ilk, but where the Sportage is concerned, there’s none.

We’ve chosen a mid-spec car, a 2.0 CRDi KX-3 manual with four-wheel drive, which means it has all the niceties but no frivolities. To tell the brutal truth, I could do without radar cruise and a panoramic sunroof, especially if their absence saves money. The KX-3 also runs Kia’s 134bhp version of the diesel engine, not the 182bhp edition likely to be more favoured by horsebox-towing types. In all, you save £2400 over the price of a KX-4, although our no-options KX-3 still costs a solid £27,000. 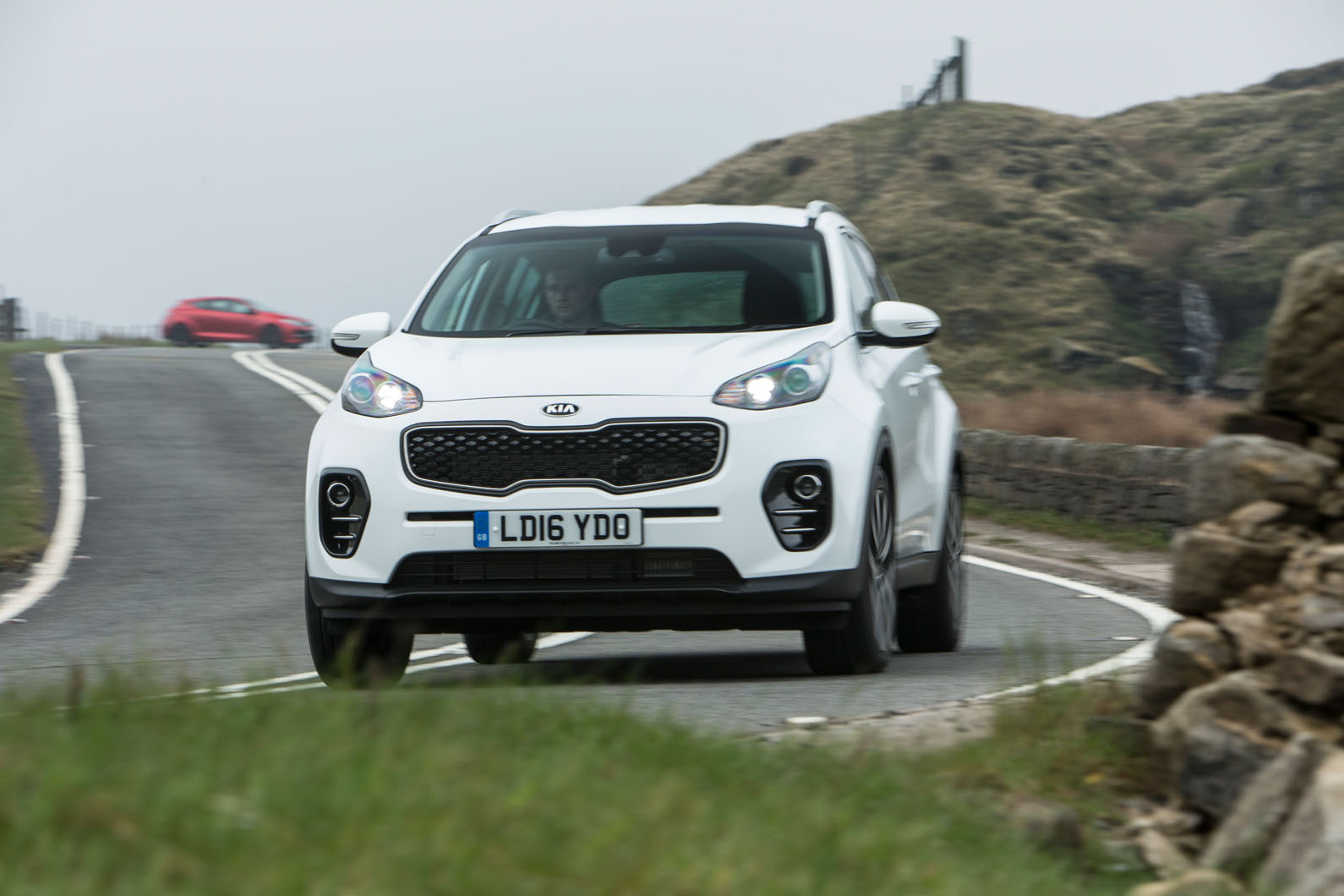 However, a peep at the spec sheet should sell you on the logic of our decision. It shows that the 134bhp engine’s generous peak torque is only 6.8% lower than the 182’s, which in my book makes our engine the good-sense choice, especially since (at 54.3mpg) you win 6.4mpg of combined fuel consumption and save (at 119g/km) 20g/km of CO2 output. And you concede only 0.9sec in a 0-60mph sprint; the KX-3 still returns a decent 10.1sec.

Put aside the look and spec and you’ll probably be impressed by the Sportage’s near-ideal size. It’s not too long or wide for supermarket car parks. You sit high enough to see far better than saloon drivers but there’s no problem with height restrictions. The rear seats (with improved knee room) are fine for adults and the boot space is okay without being the best we’ve seen. It strikes me as being a car you can use in all phases of motoring, including those rare but problematic moments when you have to park in a muddy field for the school fête. You’ll be the one who drives out with ease, even without activating the diff lock.

Talking of switches, they’re another of this car’s good points. They’re big, clearly labelled, well made and satisfying to the touch. Many more expensive cars aren’t as good, and the same goes for the cabin materials. There’s nothing avant-garde about the cabin design, mind you, and the good-looking bucket seats might be a bit of an acquired taste for cushion shape and under-thigh support, but the news is mostly good.

We’ve done only a handful of miles so far, but although our Sportage’s predecessor never hit highs for chassis sophistication, Kia has done its best to sharpen the steering (including locating the assistance motor on the rack, not the column) and revised the suspension rates. The car corners well, but the ride seems a shade stiff and the decent steering still seems to lack ultimate precision on motorways, although we have only one journey to base this on. However, the Sportage and I are about to begin a phase of our lives that will involve plenty of driving, so there will be more to report, very soon.

I have a Kia Sportage 2.0 Diesel Auto GT Line, and it's brilliant! Ok, so the fuel economy isn't great, but who cares? This car feels like a car twice its price. Gets loads of admiring glances, and driving it always puts a smile on my face. Kia have done a brilliant job with the design, comfort and feel good factor with this car.
catnip 7 July 2016

After seeing quite a few on

After seeing quite a few on the road, I'm disappointed with the looks of the new Sportage. The old one looked different, expensive even, but this model is just too derivative and like so many other SUV's out there.
gazza5 7 July 2016

I'm in the same boat - I want a automatic due to liviing in the south east - would prefer petrol but I have a diesel at the minute.

Actually looking at a NX300h shortly, altho still not sure if I want a suv, wife does, me I would be happy with a 530d estate 3 years old.

Would you/your wife consider a Golf SV? They are very good, but not many around. High seating, excellent all roundnvisibility, masses of legroom in rear, and respectable luggage. Good range of engines, with automatic choices. Feel,just like a normal Golf to drive.
Shrub 7 July 2016

Would you/your wife consider a Golf SV? They are very good, but not many around. High seating, excellent all roundnvisibility, masses of legroom in rear, and respectable luggage. Good range of engines, with automatic choices. Feel,just like a normal Golf to drive.

I've tried one Scratch, very impressed and, unusually for today's cars, offered in a spec that would interest me. I do see a few around these days although I suspect that they are considered to be a bit dull by many; a shame because they do not present the dynamic compromises of a crossover.