BACK TO ALL NEWS
Currently reading: All-new Kia Sportage revealed with bold EV6-inspired design
UP NEXT
Volkswagen ID Buzz to kick-start wave of enthusiast-oriented EVs

The Kia Sportage has been completely overhauled inside and out for its fifth generation, as revealed by the first official pictures of the mid-sized SUV before a market launch later this year.

For the first time in the Sportage's 28-year life cycle, Kia has confirmed a Europe-specific variant to arrive in September, though it will be closely related visually to the car revealed here. A bespoke chassis tune and lightly revised styling will set it apart, and it will be built exclusively in Slovakia.

The Sportage is the second production model after the new EV6 to be designed under Kia's new 'Opposites United' ethos. The Sportage's relationship with the new flagship electric car is evident from shared elements including its distinctive 'boomerang' headlights, concave bootlid, swollen rear arches and prominent spoiler. It was designed as a collaborative effort by Kia's Korean, German, US and Chinese design centres.

Karim Habib, Kia's design boss, said: “Reinventing the Sportage gave our talented design teams a tremendous opportunity to do something new; to take inspiration from the recent brand relaunch and introduction of EV6 to inspire customers through modern and innovative SUV design.

"With the all-new Sportage, we didn’t simply want to take one step forward but instead move on to a different level in the SUV class.” 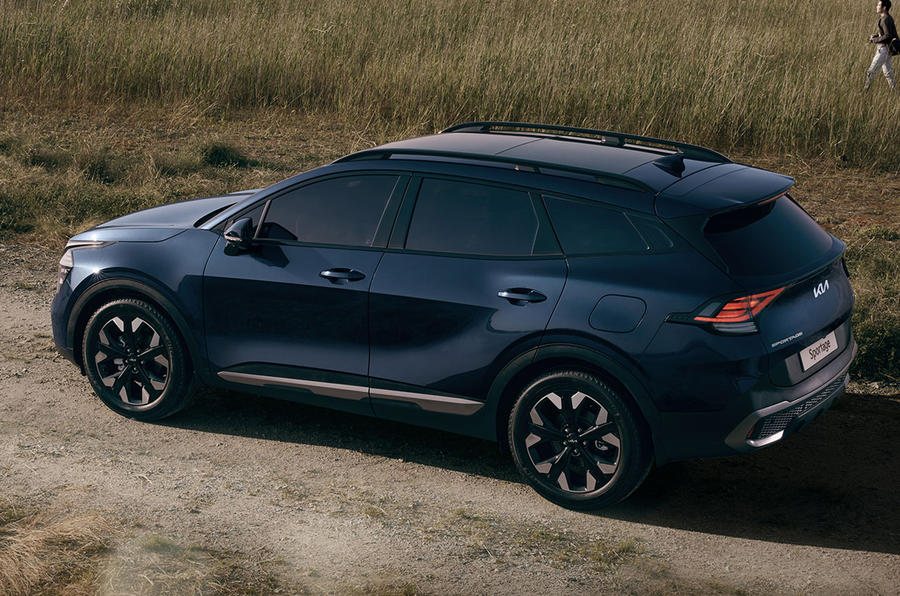 For the first time, the Sportage is available with a contrasting roof, while a chrome beltline is said to create "harmonious lines with the rear spoiler that further adds to the sporting pedigree of the car". A new Sportage X-Line is due, too, bringing rugged bodystyling and a curved roof rack, though it's not confirmed for the UK or Europe.

Inside, the Sportage gains a curved digital display, a new touchscreen infotainment display and an array of 'soft-touch' haptic switches on the gloss-finish centre console. Kia claims to have used "the highest-quality materials" throughout to ensure the Mk5 Sportage "is a special place to spend time".

Kia has yet to detail any of the Sportage's available powertrains, though it is likely to follow the closely related Hyundai Tucson in gaining a range of mild-hybrid, full-hybrid and plug-in hybrid powertrains based around a 1.6-litre petrol engine.

Prices have also yet to be confirmed, but a premium over the current car, which starts from just under £24,000, is expected.

Based on "EV6-inspired design" I was getting ready to like this, until I saw the frint end! What happened there? Bit of a mess! Rear is also so-so. Interior looks OK from initial shots.

FastRenaultFan 8 June 2021
@Scotty5 Specsavers should do the job for you.
I don't think the current Tucson or this Sportage look crap. I think they both look great and yes I have seen the new Tucson out on the roads.
I think this new Sportage will look great too.
Harry Hillstart 8 June 2021

Another great example of the difference a colour can make to how a car looks. The dark blue improves it so much!

Also, looks a lot bigger than the previous gen. They'll need something to plug the gap.