BACK TO ALL NEWS
Currently reading: Three of a kind: Alpine A110 vs A110 S vs Life110
UP NEXT
Rodin FZero: V10 weapon aims to be world's fastest car

Yes, it’s convention to test a group of cars that are differently shaped, but this isn’t a normal group test. At least they’re a different colour.

What we have here is a five-star car in the shape of the (dark blue) Alpine A110, a slightly flawed but brilliantly refreshing small French two-seat sports car with a bespoke aluminium platform and a Renault Sport engine in its middle to drive its back wheels.

We’ve said an awful lot about the A110 already but, to recap, it’s a revelation. Weighing just 1103kg (in Pure form, or 1123kg as the Légende), it has agility in spades, while the ride over poor surfaces is doubly impressive. What we particularly love about it is its lack of convention; Alpine knows a great driver’s car doesn’t necessarily need to have incredibly stiff suspension and that not everything has to feel like it was developed on a race track.

However, the white car here is the newer Alpine A110 S, which is definitely not an A110 mark two but a different take on the original; the two are meant to do different things. The S is a more, well, trackish, tied-down, focused version of the A110. Some of the things that the standard car deliberately isn’t, in fact. 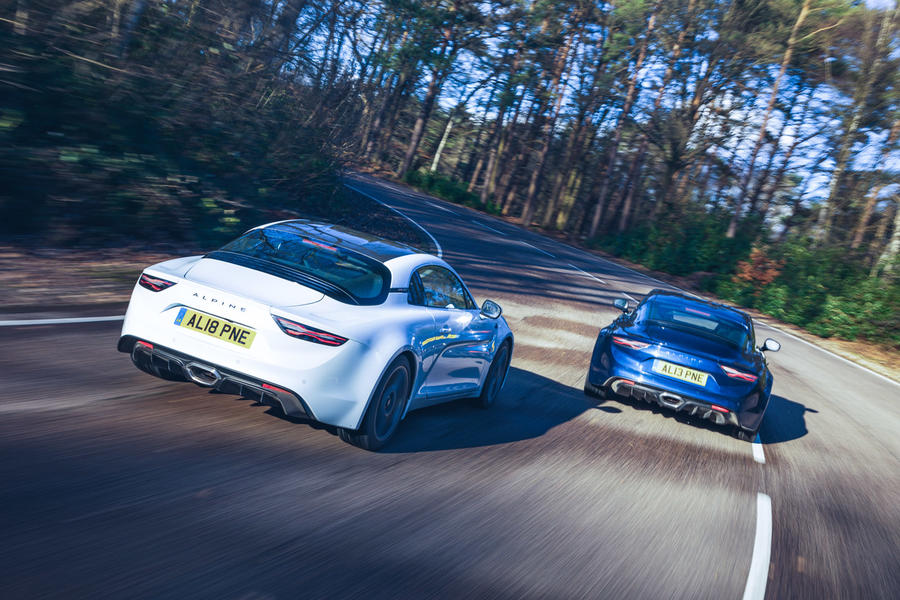 To that end, it has a bit more power – a 40bhp increase to 288bhp, although torque remains the same, at 236lb ft, because that’s the operating limit of the standard dual-clutch automatic gearbox.

That said, you can spec the 215/245 rubber on the standard A110 too if you pay for the optional forged wheels (sorry, this test will get a little geekily detailed).

Those two would be sufficient on their own to make for a test of which is better in real-world Britain, but you will have also noticed the third car in the pictures: the lighter-blue one. It’s owned by, and a project of, David Pook, formerly a Jaguar Land Rover dynamics specialist and now the proprietor of Life110.

Pook will take your standard A110 and can change it, he thinks for the better. And if you thought details were complex already, brace yourself. 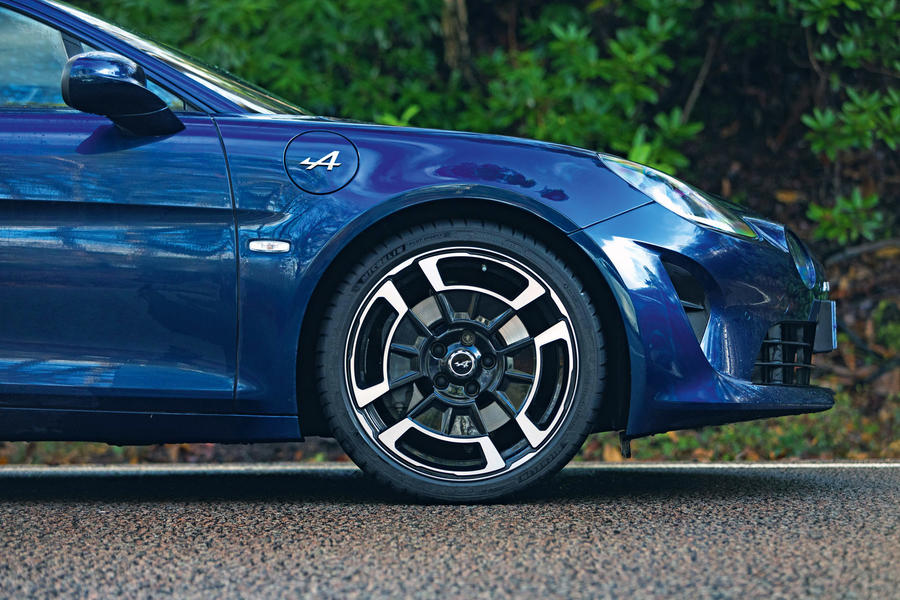 On Pook’s own car, the dampers are unchanged, but the new Eibach springs are 30% stiffer and the car sits a full 16mm lower. The wheels are 18in Evo Corse items, as used in the Alpine Cup racing series. They can run the standard or 10mm-wider rubber, ideally the latter, and are half-an-inch wider than even those forged Alpine alloys, which effectively stiffens the tyre sidewall for better response and accuracy.

There’s a carbonfibre lip spoiler, too, but where it gets really detailed is in the geometry settings. The regular A110 doesn’t run very much camber but has lots of range of adjustment, while Pook’s investigation found it runs toe-out at the front and toe-in at the rear – a trick usually reserved for front-wheel-drive cars and one of the reasons people have reported the A110 to be borderline for stability at high speeds. Now his car runs toe-in at the front.

But let’s begin with the regular A110. The goodness is all there, you know. I’ve driven it down to our meeting point and had a great early morning blast, even in poor wintry conditions. From there, I head out on a short but testing driving loop that consists mainly of small, heavily cambered and poorly surfaced roads that are, in short, rubbish. And the A110 is enjoyable on those, too. It just turns so ably, smoothening and gliding over surface imperfections. There isn’t much you’d pick over it.

Probably not the A110 S in these conditions. There’s a reason that Alpine reckons the regular model will outsell the S by three to one (an unusual ratio when it comes to top-spec variants), and it’s all about use on roads like these.

The S is a different kind of A110, not a better or worse one. Its ride is more tied-down, no doubt, and with that comes more stability. It’s impossible to say precisely how much each mechanical modification is responsible for each dynamic characteristic change, but there’s more focus and more steering feel, weight and accuracy. Also more fidget and conventionality, though. 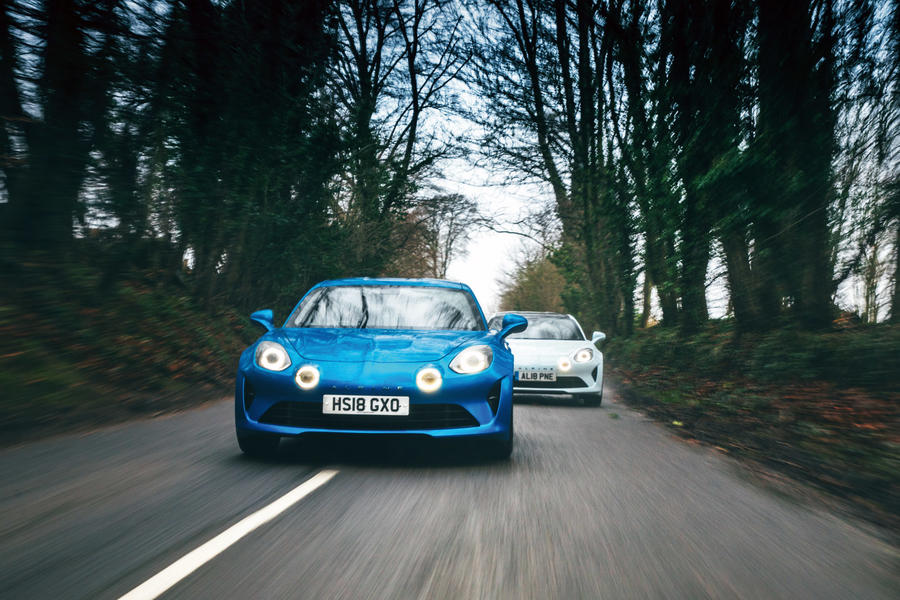 If the regular A110 feels like it was designed with nothing else in mind, the S seems more ‘normal’. If it had come out first, you’d have sworn it had been conceived with a Porsche benchmark in mind. Quicker? Perhaps, but the extra urge is at the top end so, in these conditions and on this road, you don’t notice much of it.

Then there’s the Life110. A halfway house? Yes and no. In some ways, it’s just different again – simply another nuanced option. But in tone, it’s more ‘regular improved’ than ‘S wannabe’.

The ride is ever so slightly firmer than the standard car’s, although not by nearly as much as the S, despite it riding even lower. It’s a shame to lose some of that plushness, but the A110 has plushness to spare and there are big gains to be had elsewhere. The steering is the biggest, with more precision, self-centring and road feel than a regular A110. So the Life110 feels more responsive when you turn and is more composed, while the magic of the regular A110’s agility, plus nearly all of its waft, is retained.

There are conditions, then, in which each variant would be best. I could imagine some big cheeses being presented with all three, having to decide which they ought to sell and saying ‘er, all of them?’.

But if I had access to them all, with the kind of driving I do, I suspect I’d drive the Life110 most, the A110 next often and the A110 S the least – while wondering what Pook’s geometry and wheel but not spring changes would be like on the standard car.

Given the A110 S feels like a more conventional mid-engined sports car than the regular A110, as if it were developed with a rival in mind, lining it up alongside that rival feels the right thing to do.

Step forward the Porsche 718 Cayman T, the nicest of the turbocharged four-cylinder Caymans. It starts out life as a 2.0-litre model and then gets a load of options that you could throw at the standard car but would cost you more in individual add-on fees if you did. 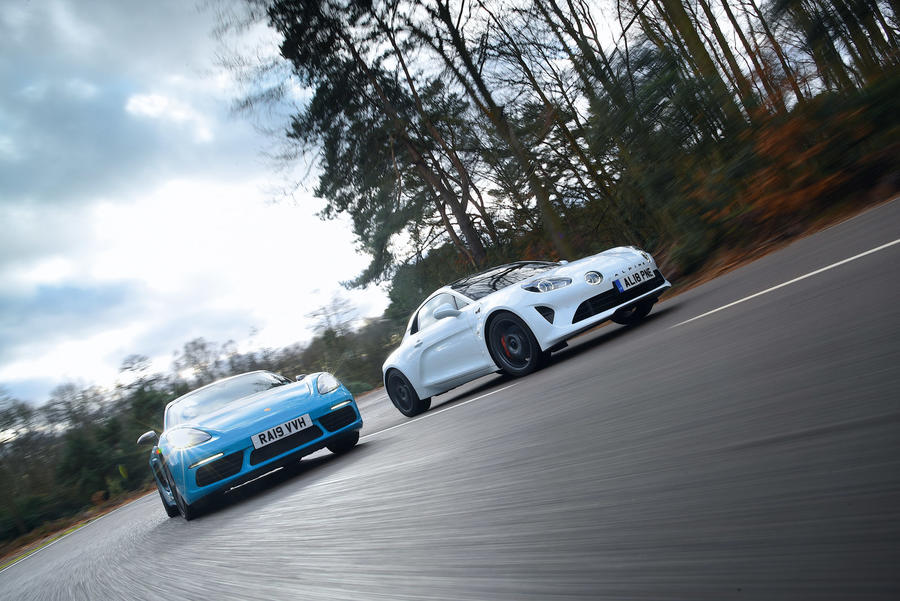 There’s a limited-slip differential with torque vectoring, active suspension (PASM) with a drop in ride height, active drivetrain mounts and 20in (rather than 18in) alloy wheels. PASM on the Cayman T is 20mm lower, rather than 10mm lower as a usual option, but other than that (plus some decals, fabric door handle loops and barely relevant details), this is a regular car with options.

Both are terrific cars, especially on smoother roads, and the Alpine feels like it were specifically targeting the Porsche. Despite the extra security and stability over the regular A110, the A110 S still turns more quickly than the Cayman and gives great steering feel while it’s at it. It probably rides better than its German rival, too.

However, the Cayman has terrific reserves of ability and a cornering stance that’s more adjustable on the throttle. There’s a better driving position and a greater sense of all-round solidity, too, plus it comes with a fine manual gearbox (a dual-clutch automatic is an option).

The A110 S probably outnoises it (a slight matter of taste), so this ends up an exceptionally close contest. I would pick the A110 S, just, while remembering that, in truth, if I wanted an A110, the S isn’t the version to have anyway.

Look at all this purist virtue signalling about no manual being a deal-breaker. At least there's more for the rest of us, i guess. Id suggest trying one. The wet-clutch with track setting (with no automatic gear changes) is ferocious and takes nought from the driving experience. This is a modern sports car and other than some predictable virtue signalling by those who want to appear like some sort of leather clad, oil in the veins purist, this is all about a modern sport car experience. No need to wet your nappies about it. Go try one would be my advice the brutal gear changes leave no doubt as to what you are contending with this is a great car and every bit as good as anything else out that, if not better.

Whilst I get the sentiment I

Whilst I get the sentiment I doubt being an auto would be a deal breaker for me, I would love to be in the position to make that choice, but I really like the standard car and if it drives even half as well as described I am certain I can live with the auto if my numbers come up. I've still got my manual na eunos if I find myself desperate to self shift.
eseaton 28 March 2020

Totally killed for me by the

That seems akin to sniffing the cork instead of tasting the wine. Or, possibly, refusing to drink anything that comes with a screw-top, just because you like using a corkscrew.

There are a lot of reasons why the A110 has had such glowing reviews. Fundamentally it is great to drive.

That seems akin to sniffing the cork instead of tasting the wine. Or, possibly, refusing to drink anything that comes with a screw-top, just because you like using a corkscrew.

There are a lot of reasons why the A110 has had such glowing reviews. Fundamentally it is great to drive.

Rubbish comparrision, just face facts not every one wants a heavier more complicated Auto in a sports car. It's down to choice and lets hope the Elise is never an auto only

Rubbish comparrision, just face facts not every one wants a heavier more complicated Auto in a sports car. It's down to choice and lets hope the Elise is never an auto only

Ah, facts. If only you ever bothered to look them up before posting.

Alpine have explained several times that in the A110 the DCT was actually the lighter choice overall, because a manual would have needed a wider tunnel through the middle of the car to accommodate the linkages. That means less inherent stiffness, which means more reinforcement needed to put the stiffness back in, which means that the manual would be heavier overall compared to only having the DCT.

Which you'd know, if you'd investigated before posting something untrue. Why are you so resistant to having informed opinions?