From £42,8979
Porsche’s T nomenclature is applied to the 718 Cayman for the first time. No more power, but all the right chassis hardware comes as standard
Close

Taking the base-model Porsche 718 Cayman as its starting point, the Cayman T raids the options list to offer a sharper, more focused kind of driving experience.

On top of a standard Cayman, with its centrally mounted 2.0-litre flat four turbo engine, the T gets Porsche Torque Vectoring (which includes a limited-slip differential), Porsche Active Suspension Management with a drop in ride height, Porsche Active Drivetrain Mounts, Sport Chrono (incorporating a customisable driving mode and an intermediate setting for the stability control) and 20in rather than 18in wheels with a smoky finish.

You could walk into a Porsche showroom and specify all of that equipment on a standard Cayman, but you’ll end up paying more. In that sense, the Cayman T does offer decent value for money. Apart from the decals on the side of the car, fabric loops for door pulls, the grey mirror housings and one or two other details, all that is exclusive to the T - or, to phrase it another way, all that’s not available on a basic Cayman - is the 20mm ride height drop. You can specify the sport chassis with Porsche Active Suspension Management on the standard model, but that’ll lower it by 10mm only.

Clearly, then, we’re looking at detail changes rather than any sweeping re-engineering work. However, sitting closer to the ground and rolling on bigger wheels, the Cayman T does look more purposeful than a Cayman. The Alcantara-trimmed GT sports steering wheel is a delight to hold and, lending a one-third-of-a-GT3 sort of air to the cockpit, if you really want to press the road-racer tone, you can choose to have a sizeable cubbyhole where the infotainment system would ordinarily be. Very few buyers actually will.

The engine is unchanged, meaning a peak power output of 296bhp arrives at 6500rpm, with 280lb ft of torque ready from 2150rpm. A seven-speed PDK transmission can be specified, but given the car’s more focused brief, the six-speed manual would seem to be the more appropriate gearbox. So equipped, it has a 0-62mph time of 5.1sec and a 171mph top speed, according to Porsche.

The 718 Boxster T and Cayman T follow in the tyre tracks of last year’s 911 Carrera T and their recipes are much the same. With no more power but all the right chassis hardware, the 911 Carrera T had a sharper edge than a basic 911 Carrera as well as its own character. The mid-engined cars now set out to do the same thing. 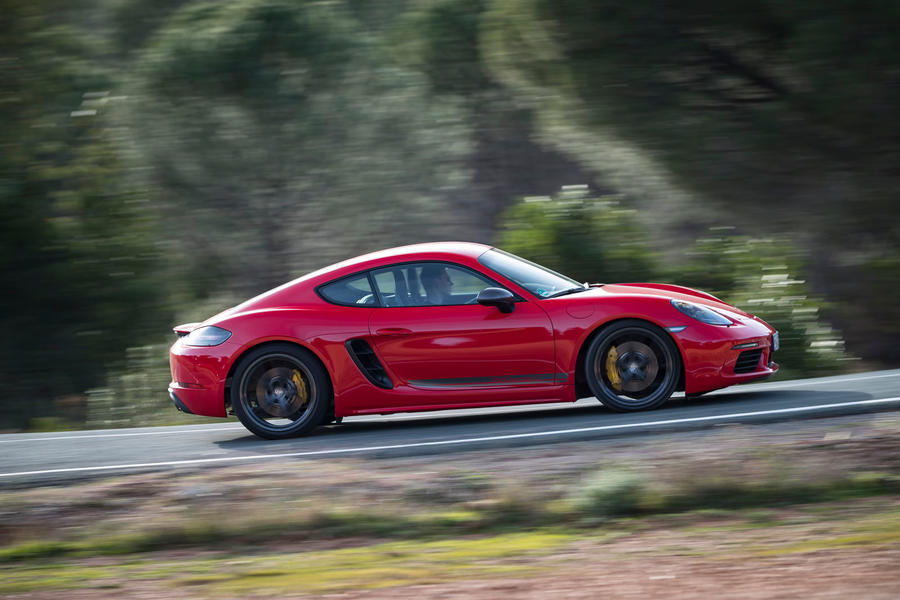 Everything that is right about the basic Cayman is right about the Cayman T. The quality of the cabin is very good, the car feels compact on the road without being so tiny that your passenger unwittingly invades your personal space and, with a decent rear boot and a deep front stowage compartment, it’s very usable for a mid-engined two-seater. The driving position is spot on, too.

In town and on longer runs, the ride quality is pretty civilised, despite the 20mm drop in ride height. The adaptive dampers will help in that regard, making the Cayman T a perfectly bearable everyday machine. It isn’t so focused that you’ll only consider using it at weekends, then, but on the right road and with Sport or Sport+ mode engaged, the Cayman T is a blindingly good drive.

Again, everything that makes the basic Cayman fun to steer along a twisting road also applies here. The steering is so well judged and so brilliantly keyed into the front axle that you guide the car instinctively from the first mile onwards. The wheel never wriggles or fidgets in your fingertips, but you always know how much grip you have available and you can position the car with real accuracy.

Turn-in bite is very strong, and once the nose has tucked in to a corner, the chassis feels beautifully balanced. There’s also exceptional body control when the road begins to crest and dip, superb composure in heavy compressions, good pliancy over bumps and such agility in quick direction changes. The brakes, meanwhile, are superb.

But what does the T do that a standard Cayman doesn’t? Sitting a little closer to the road, the Cayman T is flatter in corners and feels keener and more responsive, if only fractionally so. A better starting point is hard to imagine, but dressed up the way it is, the Cayman T’s chassis is so difficult to fault. You hustle it along a winding road with confidence, staggered at how poised and balanced the car feels.

The torque-vectoring limited -slip differential helps to tighten the car’s line away from a bend, and in very tight corners - or in slippery conditions, or on a circuit - you would certainly appreciate the extra traction and predictability it confers, but in dry and warm conditions, you rarely lean on it because, with the engine mounted where it is, the Cayman has bundles of traction anyway.

You stir the stubby, shortened gearlever around its gate just for the joy of it, feeling each cog slip in effortlessly. This is truly one of the finest manual gearshifts out there at the moment. The gear ratios themselves are very long, but the turbocharged engine has so much torque through the mid-range that the motor never struggles to pull them. At least, it doesn’t as long as you have 2800rpm dialled up, because below that point, the engine is lazy and unresponsive.

Once it’s up and running, there’s scarcely any turbo lag, and whereas many turbocharged engines feel as though they’ve done their best work by 6000rpm, this one keeps pulling until 7000rpm. In all of those objective terms, then, the engine is very good.

A pity, though, that it sounds as gruff, rough, clattery and uncultured as it does. That coarse soundtrack isn’t enough to ruin what is a very compelling driving experience, but while you wonder at the car’s balance and stroke the gearlever this way and that just for fun, so too do you wince at the tuneless din that emerges from behind your shoulders. Switching the sports exhaust into its more vocal mode does nothing to improve things. In fact, it only makes things worse. 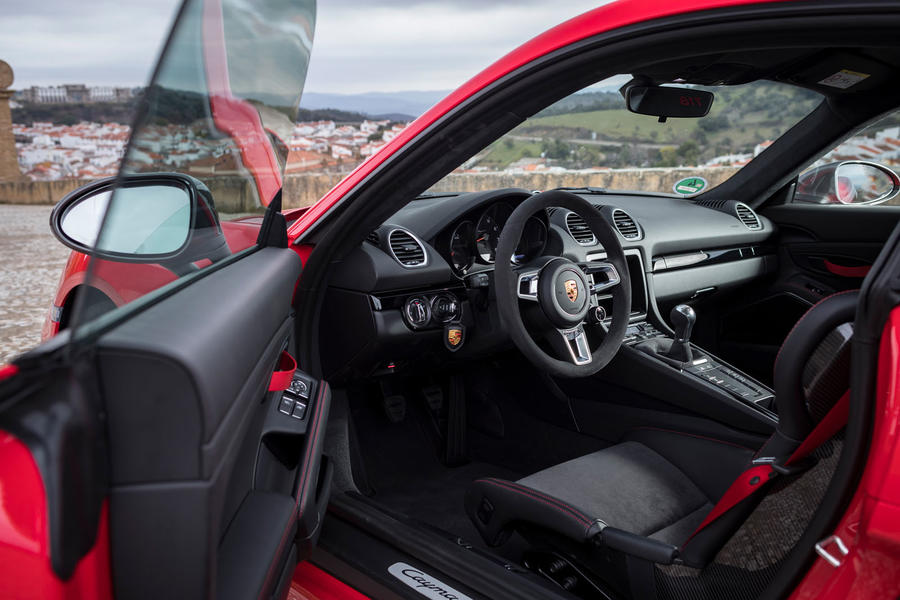 If the way the Cayman T sounds isn’t enough to put you off, absolutely. It’s a more athletic car than the standard Cayman, and with its Alcantara steering wheel and more focused dynamics, there’s even a whiff of Porsche Motorsport about it.

Starting at £51,145, the Cayman T is only £708 cheaper than the Cayman S, which is both more powerful to the tune of 49bhp and, despite its identical engine configuration, a touch nicer to listen to as well. But a Cayman S would be substantially more expensive once you’d specified all the same toys that come as standard on the T, and although it’d be faster, it wouldn’t necessarily be better to drive.

If you really get a kick out of punting a sports car along a deserted road, the Cayman T deserves as much of your consideration as any other current Cayman. 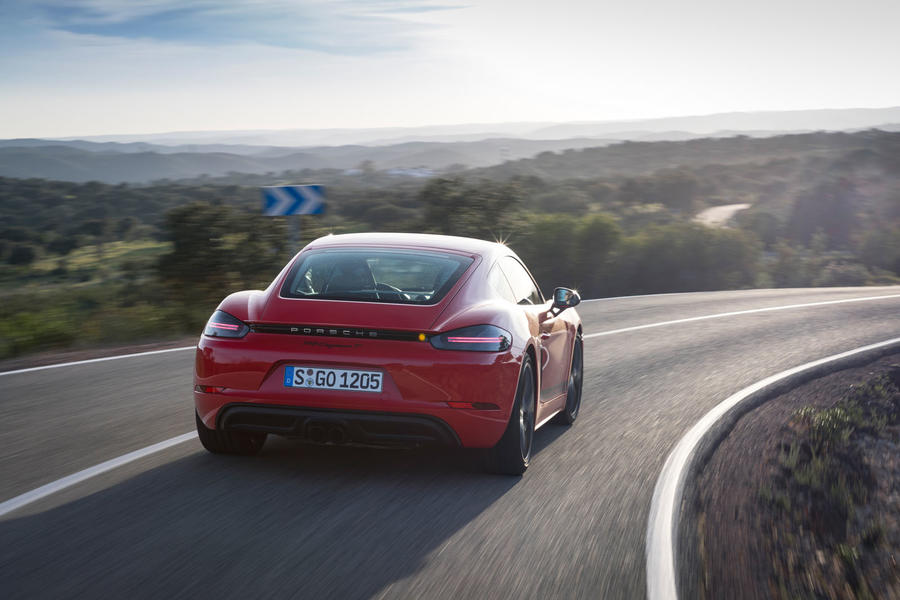 Yes these are nice Cars , Porsche is always mentioned when it comes to good Cars to drive, this isn’t a Family auto, more a weekend thrash Car, and for the money, it’s not bad at all.

Yes these are nice Cars , Porsche is always mentioned when it comes to good Cars to drive, this isn’t a Family auto, more a weekend thrash Car, and for the money, it’s not bad at all.

Perhaps you are mis judging the breadth of appeal...for a young family and until the children outgrow the child seated rear, this is a realistic as already quoted above, family daily driver, after all, why should the parents lose out on a fun steer, because they have young chldren?.

Perhaps you are mis judging the breadth of appeal...for a young family and until the children outgrow the child seated rear, this is a realistic as already quoted above, family daily driver, after all, why should the parents lose out on a fun steer, because they have young chldren?.

What are you on about? Cayman has only 2 seats.

All this active kit,

All this active kit, suspension, mounts etc are bound to be more expensive to replace than the standard passive kit and being more complicated are probably more unreliable. Think I'd stick with a standard car as it's way beyond my capabilities anyway and its still regarded as a great drive.

Swapping the flat 6 for a bag

22 February 2019
Swapping the flat 6 for a bag of nails is a crime punishable by removing far more than half a star.

I love this Car

I really love this Car

It was one of the most

It was one of the most attrative car. But it's finished. It needs a NA flat 6.

Bags of performance but dreadful sound.  Nothing would persuade me to swap my 2003 Boxster S -  with the requisite number of cylinders - for any of the 4-pot droners.

Will it be a Sales Success?

Here in USA Carrera T was not a sales success. I think the same will apply to this Cayman T. As Evo, and Autocar have intimated, these 'T' incarnations on many levels are a missed opportunity. Cloth door pulls but electric windows? Radio and a/c delete but miniscule weight loss?  Marketed as a focused model for drivers but retain the least powerful engine. This Cayman 'T' appears to be little if any closer to a GT4 than a Cayman 'S'. Appears to me once again to be a Porsche marketing exercise, soak up a little demand before releasing a limited availability GT4.

Stowage... the word you’re looking for is storage

What is it with the use of this dreadful word?

We’re talking about cars not ships... boot space is boot space, storage is just that... “stowage”... uuuggghh a word that sits alongside “eatery” and “hair-cuttist”

Stop it Autocar... right away