9
Share review
Range-topping A110 S’s extra grunt and tactile feel are welcome, but the new-found grip and body control of its chassis aren't always. Fast – yet perhaps not as much fun as a regular A110
Share
Open gallery
Close

It's easier to explain what the new Alpine A110 S isn't, actually; and it's not A110 v2.0. Alpine chief vehicle engineer Jean-Pascal Dauce – not so much the new David Twohig as the original, since he worked on the A110 project in the concept design phase when it was still a joint venture with Caterham and then returned to Renault’s motorsport department only to be brought back when his successor departed – is very clear about that.

“We have had the S planned from the earliest stages of the project,” he explains, “because we knew that a part of the Alpine customer base would want more from the car. More power, more speed, more grip and precision, and better track suitability. It’s as simple as that. We would probably have introduced it earlier if not for the mess that changing emissions laws have made of our business these last 18 months.

"We’re not answering any criticisms of the car with this version, or addressing what we consider to be failings,” he goes on. “Frankly, we don’t think it has too many of those – and the reaction of the market and the media would seem to agree.” To prove his point, he explains that the regular A110 is expected to outsell the new A110 S by about three to one.

If that turns out to be true, it’ll prove yet again how special and unusual this compact, lightweight sports car is – in a segment where so many buyers gravitate by default towards the most powerful and performance-tuned version of the car they’re considering. It’ll prove that most Alpine owners really get the ‘less is more’ philosophy that underpins so much about this car.

And, after a good thrash on both road and track, I’m inclined to agree with what the gut instincts of that majority of buyers may be telling them. For reasons we’ll get to, the A110 S is certainly faster, more precise-handling and more composed at track speeds than the regular A110 – and it can therefore be considered a success at broadening the capability and reach of the car and at complementing the existing model range perfectly well. I’m not sure it’s the one I’d pick, though. 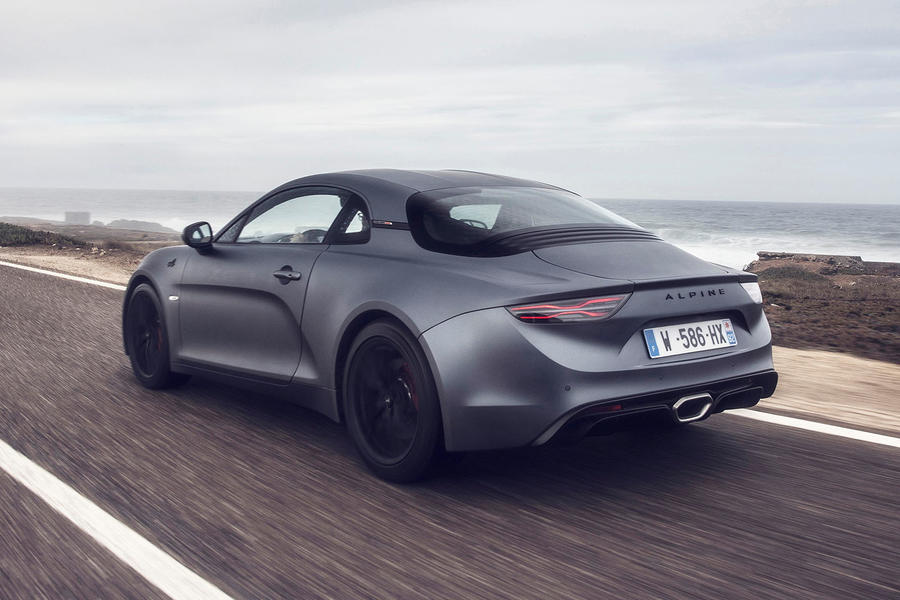 At its core, this is just an A110 running some extra turbo boost, some weight removed and some stiffer suspension components swapped in. The car’s kerb weight drops by 7kg courtesy of some (typically optional) 18in forged alloy wheels and a carbonfibre roof panel (although both are now also available on the regular A110, so the lightest A110 of them all remains the entry-level Pure version, confusingly).

Engine power from the 1.8-litre turbo four-pot is up by 40bhp to 288bhp. Peak torque is pegged at the same 236lb ft you get in the regular A110 (because that’s the operating limit of the car’s transmission) although it’s available over a broader band of revs. The extra grunt is enough to knock off just under half a second from the car’s standard kilometre acceleration claim, although it’s worth only a tenth to 62mph and 6mph in terms of top speed.

Alpine’s suspension overhaul drops the car 4mm closer to the road; stiffens the coil springs by 50% and the anti-roll bars by 100%; retunes the dampers to suit; and adds 10mm of tyre contact patch at each corner as standard (although not if you have the optional forged 18s on a Pure- or Legende-spec car). Body control is twice as good, they say, than it is on an A110 Pure. Braking power, meanwhile, is improved courtesy of new 320mm discs front and rear.

And yet what Alpine has done to this car is perhaps not as significant as what it has resisted the urge to do. There is no grafted-on rear spoiler on the A110 S. It has no decals, no go-faster stripes. It doesn’t even have derivative badging. If you buy one, you’ll be doing so very much for what the car does rather than because you want the world to know you could afford the quick one. Nicely done, lads.

On the inside, you get an extra helping of Dinamica synthetic suede upholstery with orange stitching, as well as reupholstered versions of the same sports seats that the regular A110 has, so there’s still no backrest angle adjustment, but otherwise the driving position is very good. You get the same cockpit layout and digital instruments, too, so you start the engine with the big red illuminated starter button on the transmission tunnel; you engage drive, and switch between auto and manual transmission modes, using the ‘D’ button; you engage Sport mode using another red button, this time on the steering boss; and you juggle ratios using well-placed shift paddles, which are column rather than wheel mounted.

There’s noticeably more spring in the car’s step when you’re off and rolling. The A110 S picks up a shade more urgently than the regular A110 and seems to rev more freely and urgently. Moreover, since it’s running in considerably less boosty tune than when appearing in Renault’s Mégane RS, the 1.8-litre motor has much better throttle response and linearity of power delivery than it does in other applications. It still sounds a touch flat and workmanlike by £50k sports car standards, but not so much as to be an obstacle to enjoyment.

Low-speed ride is plainly firmer than in other A110s, with the occasional jostle and thump disturbing the car around town. At greater speed, plenty of fluency returns and you wouldn’t say this is a particularly firm-riding car by wider sports car standards. But that really distinguishing sense of suppleness and ride dexterity that a regular A110 has, which allows it to deal so well with British B-roads taken around the national speed limit, is harder to detect.

Much improved body control, sharper and even more instinctive-feeling handling response, better mid-corner stability and more braking stability are what the A110 S delivers in return for that sacrifice – although most of the gains will require track use to fully appreciate them.

On the road, the car is crisper and keener on turn-in and has slightly meatier steering, with less of the flightiness of feel of a regular A110 around dead centre. Unlike the standard A110, it’s also not a car you worry will bottom out through a fast compression. Those should be considered unqualified dynamic improvements by anyone’s estimation.

On the circuit, the A110 S stays flat and level under much greater load than an A110 manages; doesn’t roll into oversteer unless you absolutely mean that it should; and can carry quite a lot more speed with it wherever it goes. But whether any of that makes the A110 S more fun will depend mainly on the sort of driving you like to do on track days, and where exactly you like to do it. It certainly makes the car more dynamically competent. Quite a lot less nerve-jangling somewhere like the Nurburgring too, I should think.

It doesn’t make it the sort of sports car, sadly, that can be teased to lurid extremes of oversteer quite as easily as the regular A110 can be, though, because it isn’t quite as easily to stabilise at that deliciously indulgent angle of mid-corner attack (witness my road tester’s sad face). The A110 S’s stiffer set-up and greater tyre footprint allow it to do serious track pace much more effectively than an A110, but handling playfulness notably less so. 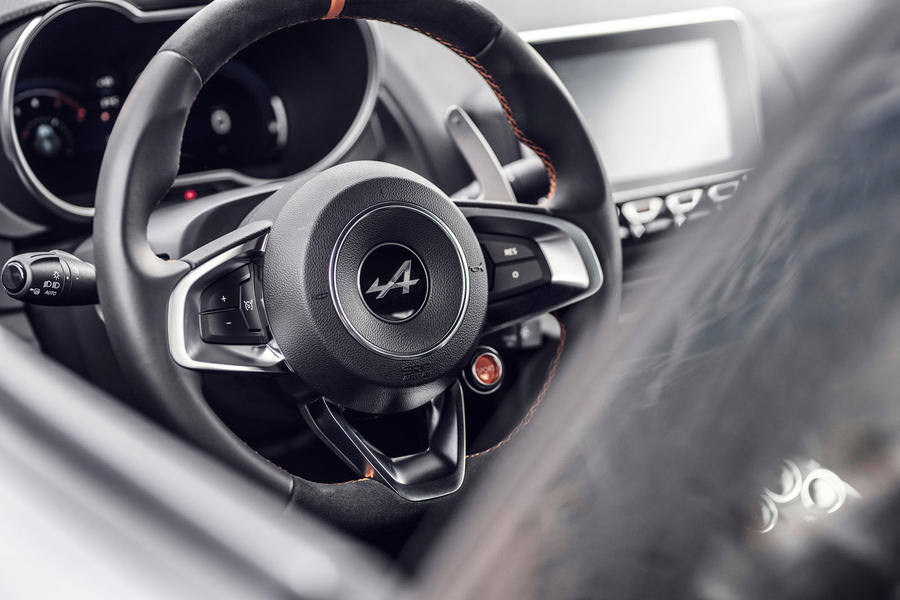 Were I a track regular who cares as much about how fast I go as how I go fast, this is probably the A110 I’d have – although I’m not sure I’d be an Alpine customer in the first place in that case.

For predominantly road use and the occasional circuit foray, however, I’d stick with an A110 Pure on 17in wheels, with one or two carefully chosen options. Getting serious is thoroughly overrated anyway. Fun is much more, well, fun - isn't it? 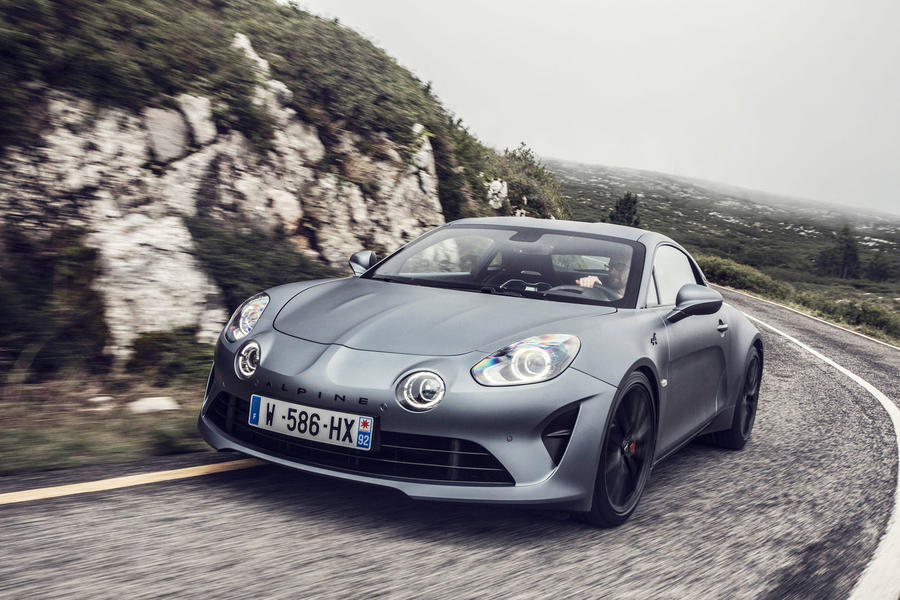 True words written in the conclusion, and might I add an example of just how good Zuffenhausen is at making ever faster Porsche's equally better Porsches. As for the Alpine, bypass either version, after all their owned by the Cayman?

As for the Alpine, bypass either version, after all their owned by the Cayman?

These are grown-up sports cars for grown-ups. It's not a game of COD.

Nowt wrong with a Cayman (though room for a few improvements), but the Alpines offer something different and worthwhile. Try both yourself and you'll have a more nuanced (and valid) opinion.

True words written in the conclusion, and might I add an example of just how good Zuffenhausen is at making ever faster Porsche's equally better Porsches. As for the Alpine, bypass either version, after all their owned by the Cayman?

Shoehorn quote of the day goes to Bellend Boris.

Credit to Autocar for not lowering itself to the standards of EVO Magazine which now regularly prostitutes itself to vendors and suppliers. Read their take on the Alpine S which includes the reference to "significant flaws" in all it's competitors, yet fails to mention "significant flaws" in each vehicles previous road test???  And guess how many EVO journalist contributors have fessed up to personally owning an Alpine......

The A110 has been amazing

but I wonder, what do Alpine do next?

They need to make a convertible or a small sports SUV

but I wonder, what do Alpine do next?

Parts and their prices

Maybe, but I'd guess the average transaction price when options are taken into account would mean the Cayman usually costs more.

Maybe, but I'd guess the average transaction price when options are taken into account would mean the Cayman usually costs more.

Not maybe. Besides options are exactly that, optional!