BACK TO ALL NEWS
Currently reading: Peak performer: Racing an Alpine A110 at Silverstone
UP NEXT
Renault Scenic returns as radical EV with hydrogen range extender

Peak performer: Racing an Alpine A110 at Silverstone

The organisers think it’s too exclusively French, but I rather liked the vibe of the Alpine Elf Cup, a one-make race series for Alpine A110s. It turns a little bit of whatever race circuit it visits into a part of France. By the end of a weekend at Silverstone, I’d remembered how to shrug resignedly and say “j’ai fini douzième” in a convincing accent. Practically a native.

Maybe this is how it feels to be French during Le Mans, only with nobody throwing a bottle of piss into a passing TVR because its driver wouldn’t do a burn-out.

But the organisers of this pan-European race series would like more entrants from different parts of Europe. A British team, a German or a Spanish or Italian team, perhaps, to match the fact that, of the six places the series goes, there are rounds in Spain, Belgium, Germany and Britain along with two in France. At the moment, all 18 cars on the grid are entered by French teams and are driven mostly by French drivers. There’s one Swiss and one Belgian and usually a hired interloper who, on this occasion, is me. 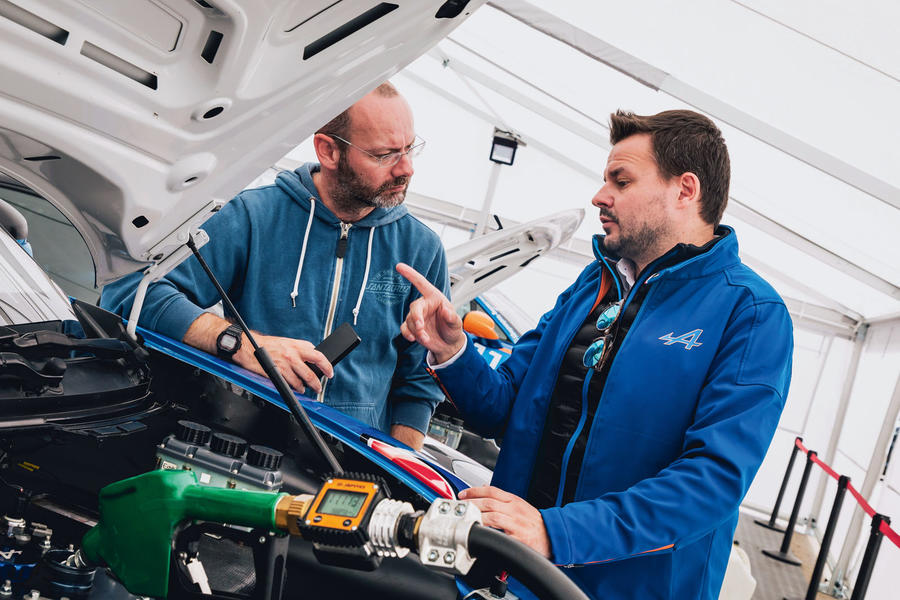 The cars are the A110s that we know and love, but more racy. While ‘my’ car is up on its air jacks with its wheels off, I ask the series’ technical director what are the differences in suspension between a road car and a race car. It’s easier to say the things that are the same, he tells me: it’s the uprights and the wishbones.

With only a few changes, the race A110 – stanced, isn’t it? – is fit to become a GT4 race series car, too. The A110 makes an interesting GT4 endurance racer, with its small engine and tiny frontal area meaning it’s down on power but much more aerodynamically efficient than the supercars it competes against, so it’s as close as you’ll get to a classic series where Minis take on Ford Galaxies.

The differences between the two race series specifications are small enough that you could swap the same Hardcore Alpine back and forth between the Alpine Cup and a GT4, but nobody does: I guess GT4 would feel like the next step up. 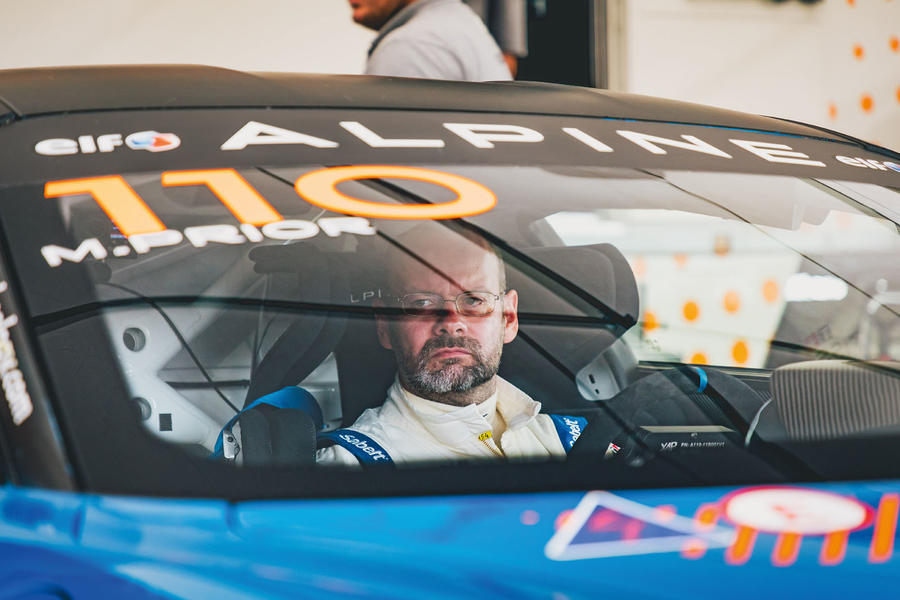 So this race should be a doddle, I’m led to believe. Just a bunch of old rich blokes nobbing about in a car they can’t drive very well on a circuit they’ve never been to.

Hmm. No. As it turns out, of the 18 drivers, there are a few young hot-shoes who want to make it as GT drivers and some older blokes who used to race in the Renault Clio Cup – the kind of madcap series that births touring car drivers. Laurent Hurgon, the Renault Sport engineer who sets all of the Nürburgring lap times in hot RS models, is competing in the series but by no means a guaranteed top-six finisher.

Plus this lot know the cars. And they’ve been to Silverstone before. And I don’t speak loads of French, the team don’t speak loads of English, so when setting it up, we’re just winging it. And one of my team-mates wants the limited-slip differential out of my car between races because it’s more aggressive than the one in his; which is fair enough, because he’s paying to be there and I get to see how this changes the handling. 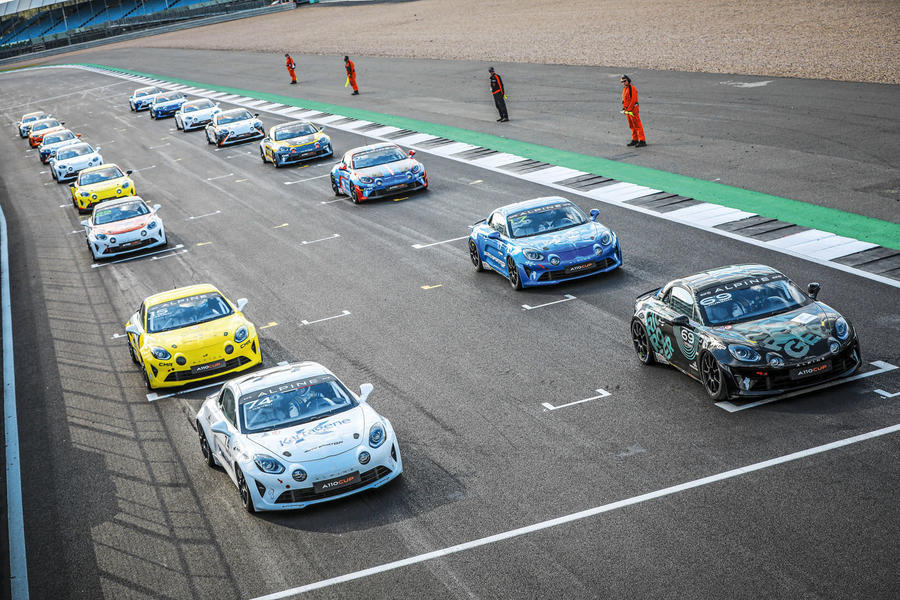 Anyway, that’s the excuses mostly out of the way for two races – one Saturday, one Sunday – which each last 25 minutes plus a lap and have a rolling start.

Silverstone is a big circuit but when your last race here was in a Citroën C1, it feels shorter than normal. The race A110, with 266bhp and at 1135kg, is a nice fit for it on Michelin slicks that provide a fairly mega amount of lateral grip. Those, plus a proper sequential gearbox in place of the road car’s dual-clutch, plus all of the safety accoutrements, mean the A110 feels like a terrific race car. But there are elements of the road car’s character intact. It’s very agile, happy to move around as you lift and turn-in, though because of the limited-slip differential that is absent from the road car, it hooks up under acceleration more easily – albeit with more grip and traction than power now, with heavier steering that has bags of feel. With a less aggressive differential, there’s less initial hook-up under acceleration and a more pendulous swing into oversteer later.

With all cars making the same power and having the same aerodynamics, passing is hard, so there seems to be the time-honoured Clio Cup passing technique of sticking your car in the way of somebody else’s and letting them avoid you. 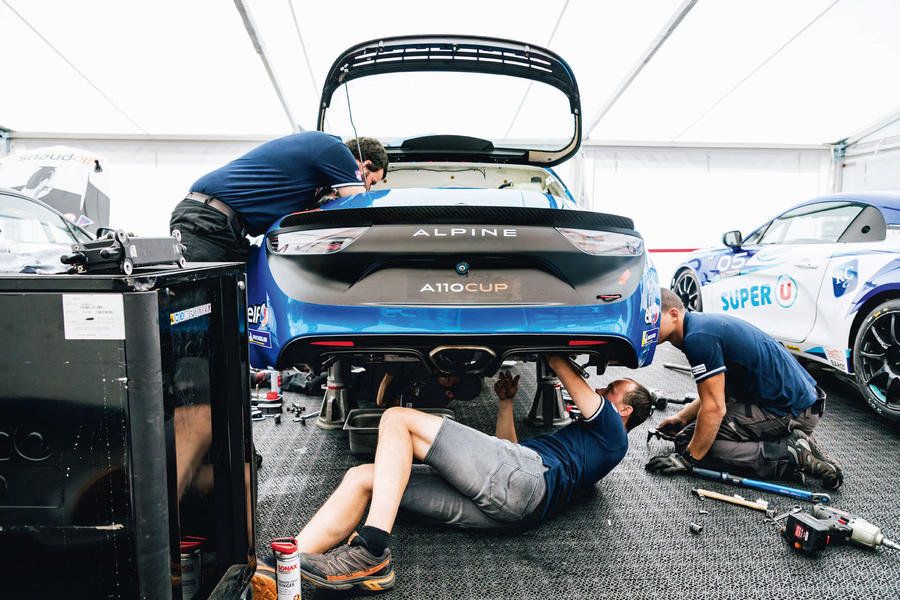 Race-spec Alpine A110s get a pretty thorough going over. The engine is internally the same as the road car’s 1.8-litre four-cylinder turbo but a new intake and exhaust lift its power by 18bhp. More importantly, the rear subframe is re-fabricated to accommodate a firewall between the cabin and the engine bay, to brace the area and to allow fitment of the sequential race box and pneumatic shifter. At the front there’s a new fuel tank, while all round the bespoke suspension with adjustable springs and dampers drops the car’s overall height by 62mm. Stripped inside, the cars could weigh as little as 1050kg, but the minimum race weight is 1125kg (the road car is 1098kg at its lightest).

Rhapsody in blue: Life with an Alpine A110

Yeah, sounds like your not that impressed by this race series, almost as if your doing someone a favour Matt?