BACK TO ALL NEWS
Currently reading: Plastic fantastic: the best fibreglass cars
UP NEXT
Agents of change: how car buying is changing

We dive into the moulded world of resin bodywork to recall the memorably cool, quirky and in some cases oddly inspirational creations
Open gallery
Close
Share story

The chances are you won’t have heard of the Glasspar G2. It was 70 years ago that the American two-seat sports car was built by Bill Tritt, a boat builder who took a fancy to creating a car for a friend.

Tritt’s experience with fibreglass allowed him to sculpt a car similar in proportions and style to the later MGA. It was built on a bastardised Willys Jeep chassis and muscled along by a Ford V8. Soon enough, his G2 was spotted by a supplier of Vibrin resin, and a bespoke commission was made, with the resultant Alembic I gaining coverage in Life magazine and winning the attention of engineers at GM.

In the passing 70 years, there has been no shortage of weird and wonderful cars that have featured a fibreglass body or, in some cases, monocoque as well. The best known in the UK is the Reliant Robin, the three-wheeler of Only Fools and Horses fame, even if it was actually the Regal van version.

Some engineers might look down their nose at fibreglass, but there have been significant cars with the whiff of epoxy resin that the world would have been a duller place without. Here are 10 of the best.

Alpine came within a feeler-gauge gap of blowing Porsche and Mazda away with the A610. Here was a 160mph, mid-rear-engined sports car that delivered a tactile driving experience and got road testers excited (Richard Bremner said it was “simply brilliant fun”) but failed to persuade Britain’s drivers to buy one. 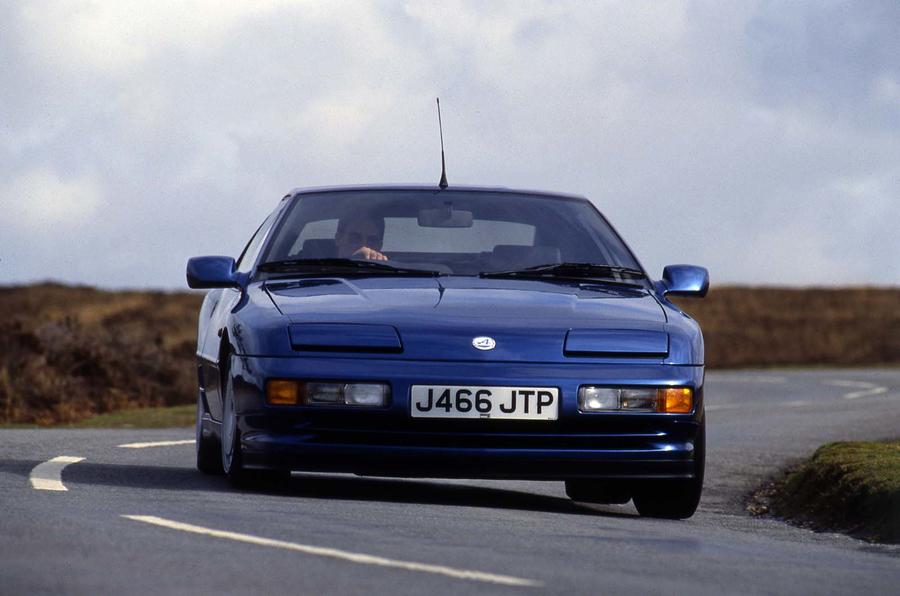 Essentially a reworked GTA, the A610 finally got the basics right by shifting the mass of the turbocharged 3.0-litre V6 (shared with Peugeot and Volvo) further towards the bulkhead, so the A610’s weight distribution was 43:57 front to rear, compared with 37:63 of its less powerful predecessor. With the A610’s 250bhp, good traction and feelsome steering, the few buyers who took the plunge were able to push the stiffened steel chassis right to the limit without suffering a nervous tick.

When Chevrolet decided to sell the Corvette beyond the land of the free, it knew it must match the credentials of European sports cars. The C7 was the result, and it moved the game on significantly for the Stingray. The bodywork was mostly reinforced plastic, with carbonfibre used for its bonnet and removable roof panel, on a new aluminium platform that helped shed weight. However, the engine remained the full-fat, super-size experience that has marked out the Corvette since the 1950s, a 6.2-litre lump kicking out a lazy 75bhp per litre. The result was a Vette that blew away preconceptions almost as quickly as it guzzled gas.

Lee Noble, a serial designer and engineer of sports cars, took the world by surprise when he released his first car, the M10. We wrote at the time that it could be “one of the most complete and exciting British mid-engined two-seaters we’ve driven” and before long Noble answered what few criticisms there were by releasing the M12 GTO. 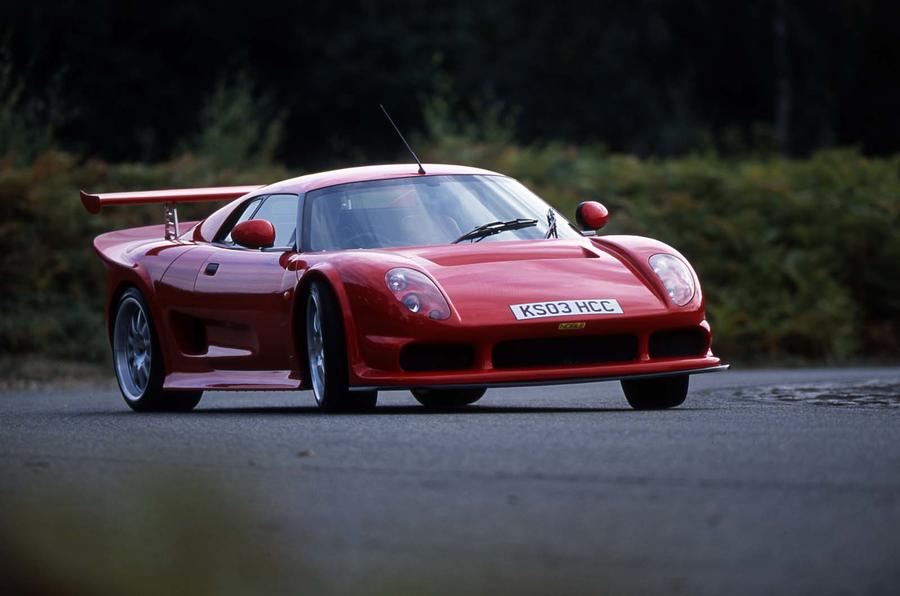 Its fibreglass body was laid over a steel spaceframe chassis with a twin-turbo Ford V6 in the middle, and the whole lot was assembled in South Africa. Lee Noble would later sell the rights to the car to Rossion Automotive in America. It was our loss and their gain.

In 1973, Marcello Gandini’s Stratos must have looked like it had driven off the stage of a Ziggy Stardust David Bowie gig – because it still does today. The mid-engined machine was created for rallying, and featured clamshell nose and tail sections, fashioned from fibreglass, that pivoted up towards the sky, while sat in the engine bay was the 2.4-litre V6 from Ferrari’s Dino. 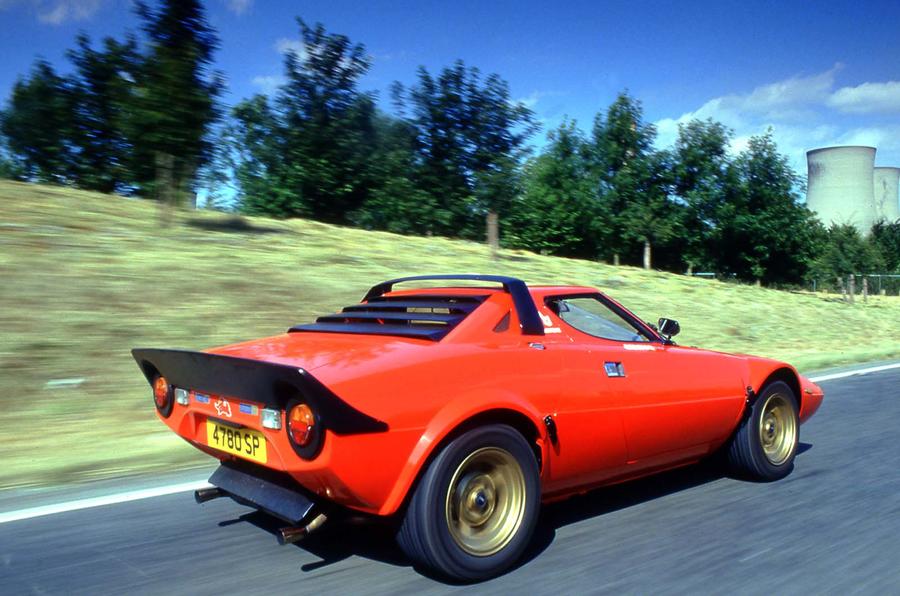 Gandini got the gig after Nuccio Bertone bought a friend’s Lancia Fulvia and set about creating a concept for the Stratos, hopeful of winning design work with Lancia over arch-rival Pininfarina. The result was the Stratos Zero, a car so low that Bertone personally drove it to Lancia’s works racing HQ, and passed straight under the security barrier – to the applause of onlookers.

No, the body of a Seven isn’t all glassfibre, but the bits that need replacing most often (the nose cone and wings) are – something anyone who has raced one will be grateful for. 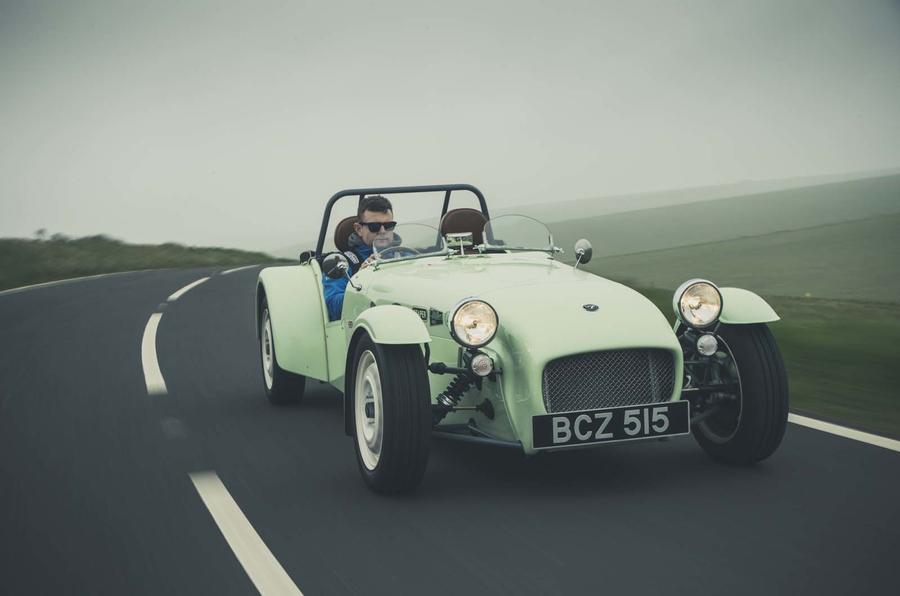 So it scrapes onto this list, and anyone who’s ever hopped, skipped and jumped their way along a bumpy B-road in a Seven couldn’t begrudge its inclusion. As distinctive as a bowler hat, the British lightweight had roots in the Lotus Seven of 1957, and over the years there have been more variations on the Seven theme than bees in a swarming hive. Happily, though, at the heart of every model is a purity that has never been bettered.

The 308 is best known to Ferrari fans above a certain age as the co-star to Tom Selleck in the US TV crime caper Magnum PI. Before the on-screen chemistry formed in 1980, however, the 308 was notable for less glamorous reasons: the GTB version was the first Ferrari to wear a fibreglass body. 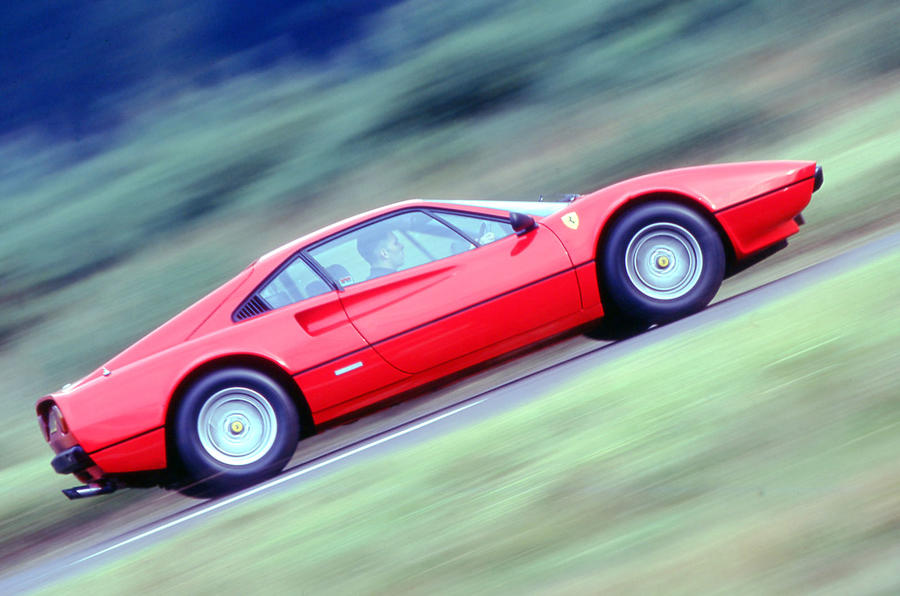 The design was the handiwork of Pininfarina, and the car was built across the road from the Modena factory, at Carrozzeria Scaglietti – Enzo’s favoured coachbuilder.

It is believed only 712 were made, before Ferrari switched to steel and aluminium bodywork.

Lotus was one of the early pioneers in fibreglass. The oh-so-pretty 1957 Elite used it for its monocoque – an unusual approach, and one that would have benefited from further research and development; on early cars, the suspension would detach itself from the monocoque. 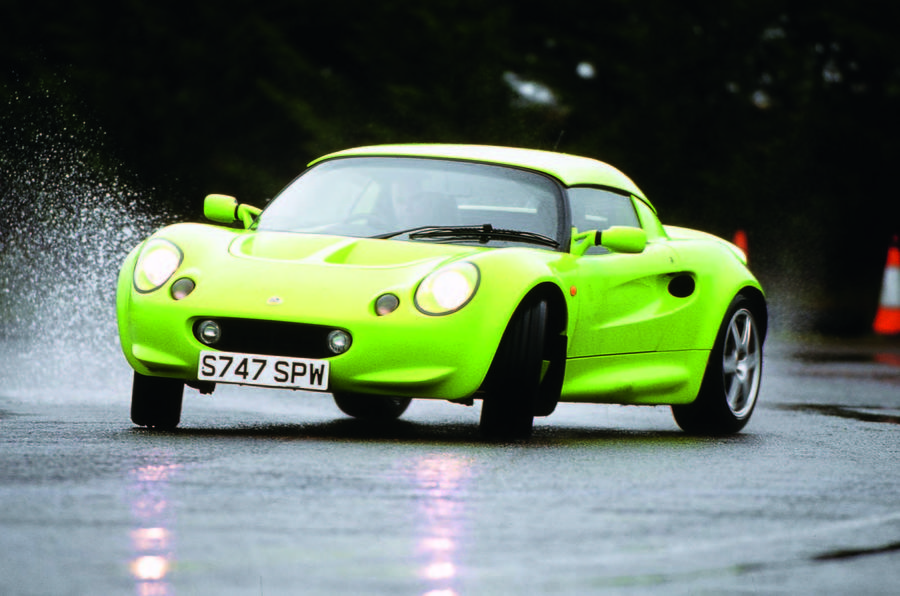 There were plenty of teething problems with the Mk1 Elise, too, but it was such a hit, it defined Lotus into the new century. The adaptable extruded aluminium platform and fibreglass body (styled by Julian Thomson) put a modern spin on Lotus’s ‘less is more’ philosophy and provided Lotus with a lifeline that as good as ensured it is with us today.

Choosing a favourite TVR is like trying to pick a favourite child but, when push comes to shove, surely the car that the company will be best remembered for is the Griffith. 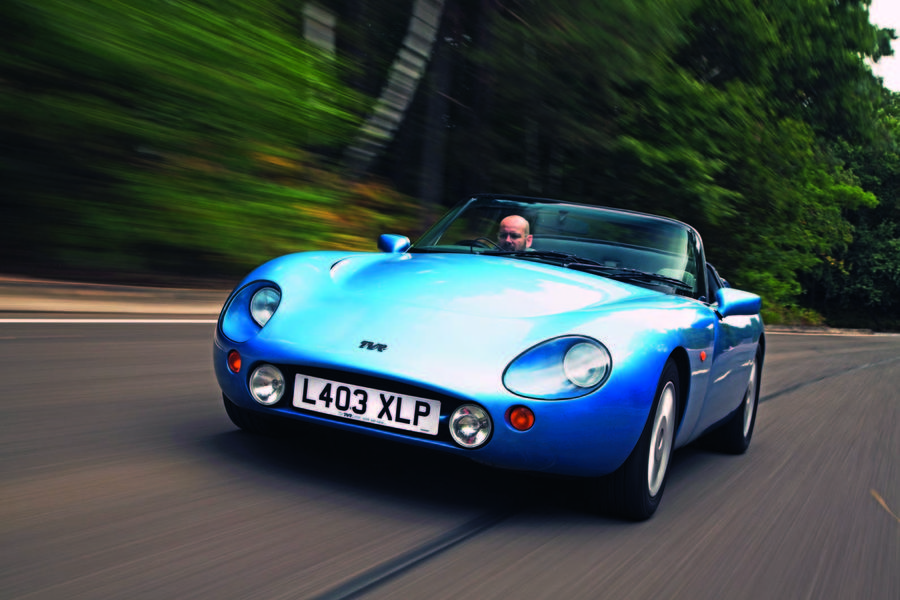 It had it all. Coke-bottle curves, a bellowing V8, wrap-around cockpit and road-holding that was just about on the right side of ‘lively’. It was also significant for pre-dating the era when the Blackpool-based manufacturer decided that it would make everything itself – from the engines to silly electrically operated door releases – after which reliability became a fractious issue that led to owners’ patience being tested harder than the cars’ rear tyres.

The Rancho was ahead of its time, and not just for its fibreglass body and ‘rough ’n’ tumble’ plastic cladding. It was a precursor to the modern-day SUV and crossover, a car that looked like a 4x4 but was actually two-wheel drive and based on the floorpan of a Simca 1100. Matra borrowed a 1.4-litre engine from its Chrysler extended family. 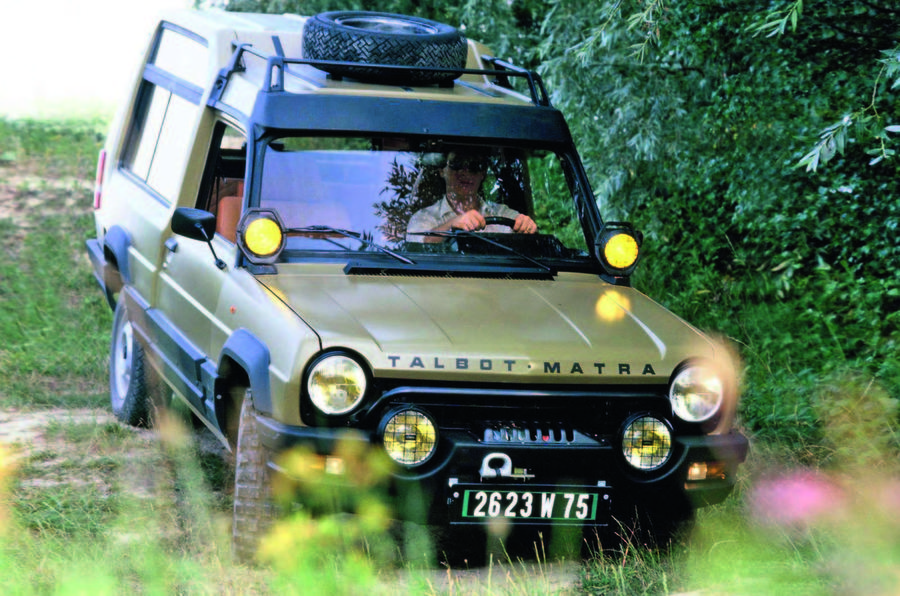 Pick the Grand Raid version and you got a limited-slip diff, skid plates, a winch and an extra spare wheel, perched on the roof. Whether or not this made a blind bit of difference to its poor all-terrain capability is neither here nor there. An unlikely inspiration for SUVs? Could be.

It might not stir the emotions or quicken the pulse, but the Renault Espace was a clever concept that remains one of the most practical and versatile types of car.

Europe’s original people carrier, it offered seven independent seats, and the rear five could be folded or lifted out (something of a back-straining exercise), while the front pair would spin around, should you wish to win a dare with friends or, more sensibly, stop to have a picnic. 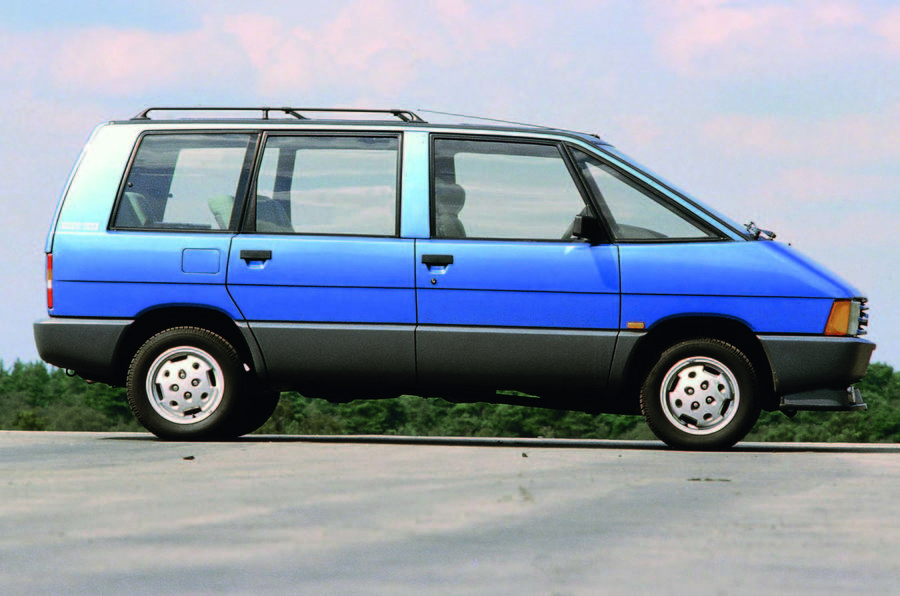 The brainchild of Matra, its steel and fibreglass construction helped offset the height of the monobox body, meaning it was surprisingly sprightly for its size.

Somewhat surprised not to see the original Lotus Elite in the list - first full monocoque fibreglass shell I believe.

Likewise the Esprit surely had to figure in the list somewhere, given some of the choices.  And if a Seven/Caterham was going to be closen why not a series 4 Seven instead as that had much more fibreglass in its shell.

The first few hundred 308GTB were fibreglass. It then switched to steel/aluminium. All were GTB. Car pictured is a Steel GTS.

I hadn't realised that the Ferrari was fibreglass, so that was interesting.

But I'm afraid that including the Caterham ( I once heard an American pronounce it cat-err-ham) is just plain wrong. An old Clio has plastic front wings, and you wouldn't characterise that car as plastic.

I hadn't realised that the Ferrari was fibreglass, so that was interesting.

But I'm afraid that including the Caterham ( I once heard an American pronounce it cat-err-ham) is just plain wrong. An old Clio has plastic front wings, and you wouldn't characterise that car as plastic.

I had a scenic with plastic front wings, agree the caterham shouldn't be included no matter how great they are, a scimitar would be a good choice though.

I hadn't realised that the Ferrari was fibreglass, so that was interesting

The Matra Rancho was about 30 years ahead of the curve, back when people still bought saloon cars

Ferrari was interesting, though it reads it was only the GTB edition that was fibreglass?

Another interesting one are the Chilean Minis which were fibreglass but based on the shape of the original.