BACK TO ALL NEWS
Currently reading: Our pick: The best second-hand Mazdas
UP NEXT
Volkswagen primes hardcore ID 4 for 2021 Mexican 1000 rally

Our pick: The best second-hand Mazdas

Mazda’s back catalogue throws up some choice morsels on the used market, and these are the best of them
Share
Open gallery
Close
Share story
News
by James Disdale
5 mins read

Mazda has produced some truly special cars over the years. And now many of its best creations are available for knockdown prices on the used market.

While European firms were firing frenetic four-cylinder hot hatches out of their factories, Mazda chose instead to launch a compact coupé powered by a 1.8-litre V6. Today, the MX-3 is a great modern classic that’ll double as a daily driver, thanks to robust quality and decent comfort. That 130bhp turbine-like V6 is no fireball but sounds great, and the front-drive chassis is nimble thanks to advanced passive rear steer. Better still, prices are low, with mint cars still only a couple of grand.

The RX-7 went toe to toe with Porsche for nearly 20 years, but with the third-gen FD model in 1992 it finally had a car to beat its rival. This version looked better than the 968 and went harder thanks to a 237bhp turbocharged rotary, and it handled just as sweetly. However, barely 200 found homes in the UK before sales stopped in 1996. These cars are rare, but there are plenty of the more powerful grey imports to choose from. Whichever you choose, a meticulous service history is essential. 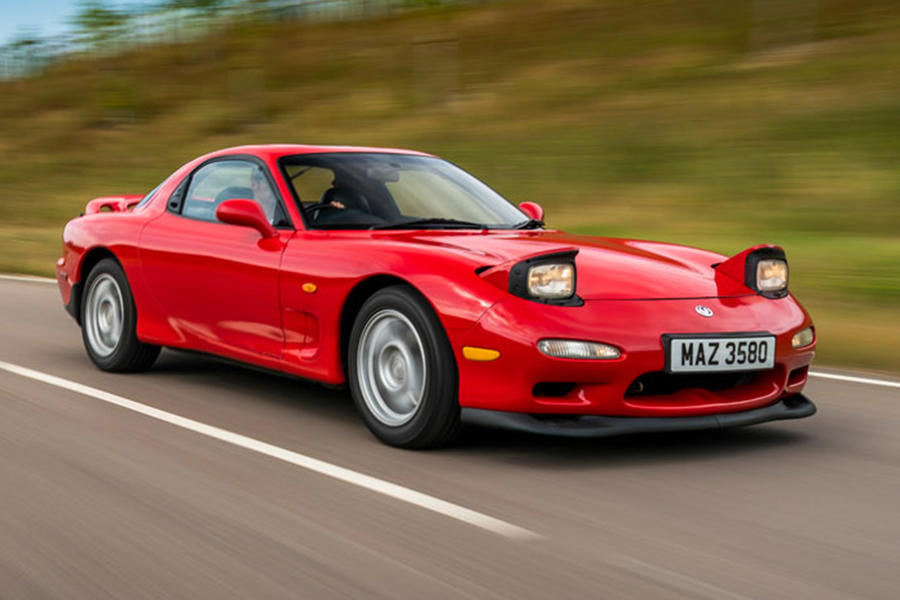 The 1990s coupé boom left buyers spoilt for choice. One of the most sophisticated, if understated, was the MX-6, which also formed the basis of the garish Ford Probe. The Mazda isn’t as eye-catching as that, but it handles well and is powered by a creamy-smooth 168bhp 2.5-litre V6. There’s also space for four and a usefully sized boot, so it’s fairly versatile. Problems are few and far between, but a fully stamped service book is desirable. 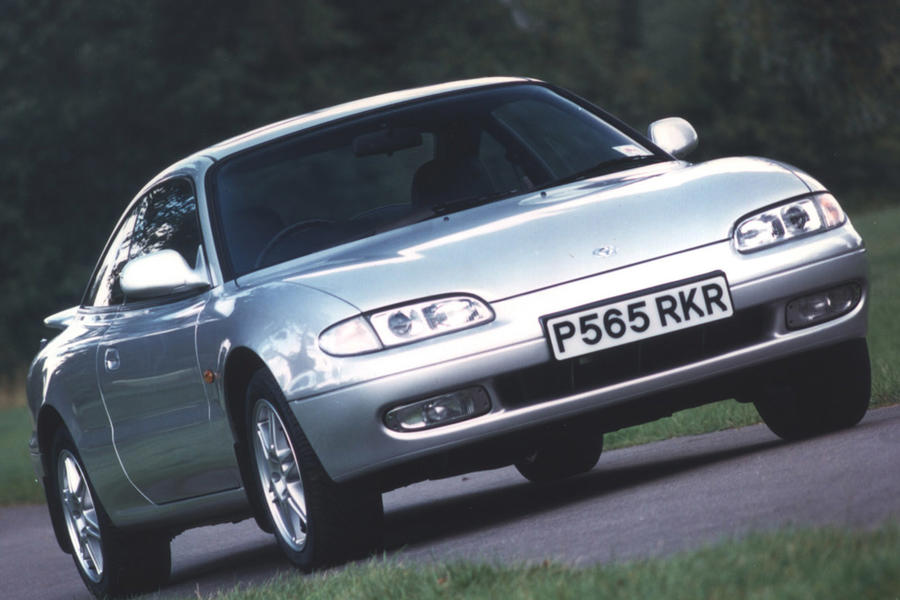 If you want to stand out from the Lancia Delta and Escort RS Cosworth homologation crowd, look no further than the 323 4WD. This turbocharged 148bhp 1.6-litre hatch is getting rare, though, and prices are rising. It’s not as quick and composed as its Group A competition, but the compact 323 is fleet-footed and has genuine competition cred thanks to a trio of WRC wins. Rust has killed many of these motorsport Mazdas, so check for rot. 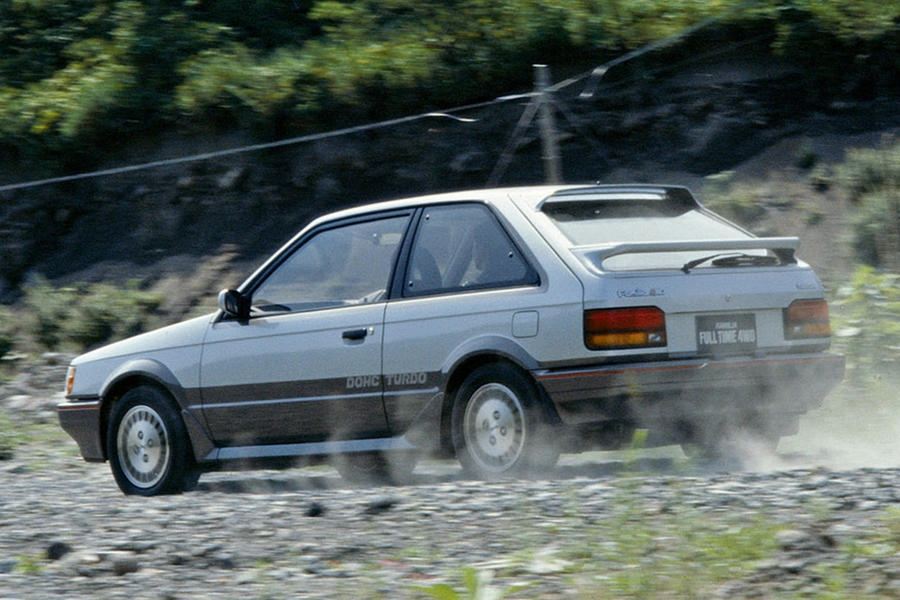 One we found: An 80k-miler with lots of history, but a tatty body means the £6500 price needs haggling.

Not many hot hatches have come out of Hiroshima, so it’s hardly a surprise that the Mazda 3 MPS has slipped into obscurity. Yet with the potent 256bhp 2.3-litre engine from the 6 MPS driving the front wheels, a drive in this 3 is a memorable experience. Torque steer is an issue even with the standard limited-slip diff, but the Ford Focus-based Mazda is grippy and fun to drive. Early cars are a little frumpy, but the sharper second-generation version looks the part with its bonnet scoop and large rear wing. Better still, its cult status means most are well cared for, and reliability is excellent. 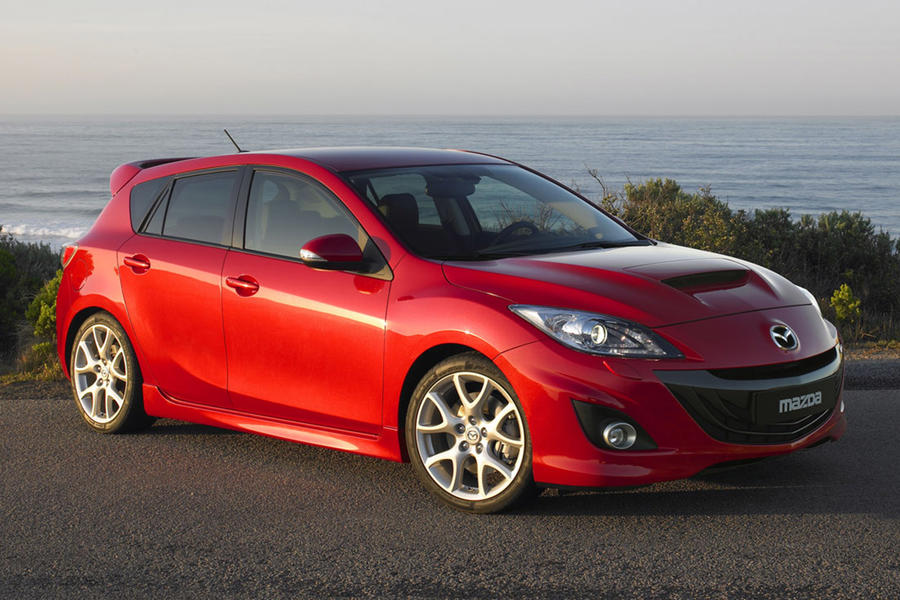 We’re not going to pretend there aren’t risks when buying a rotary, but choose carefully and the RX-8 makes a cracking used buy. Its near 50:50 weight distribution and rear-wheel-drive layout make it huge fun on your favourite road, while the Wankel’s uncanny smoothness and appetite for revs compensate for a deficit of outright urge. Those suicide rear doors and decent boot mean it’s practical (ish), too. Fuel costs are high, but it’s the risk of engine failure that puts many off. However, find a high-output 228bhp version with a full history and keep an eye on the oil consumption and you can bag a bargain that looks and drives like no other. 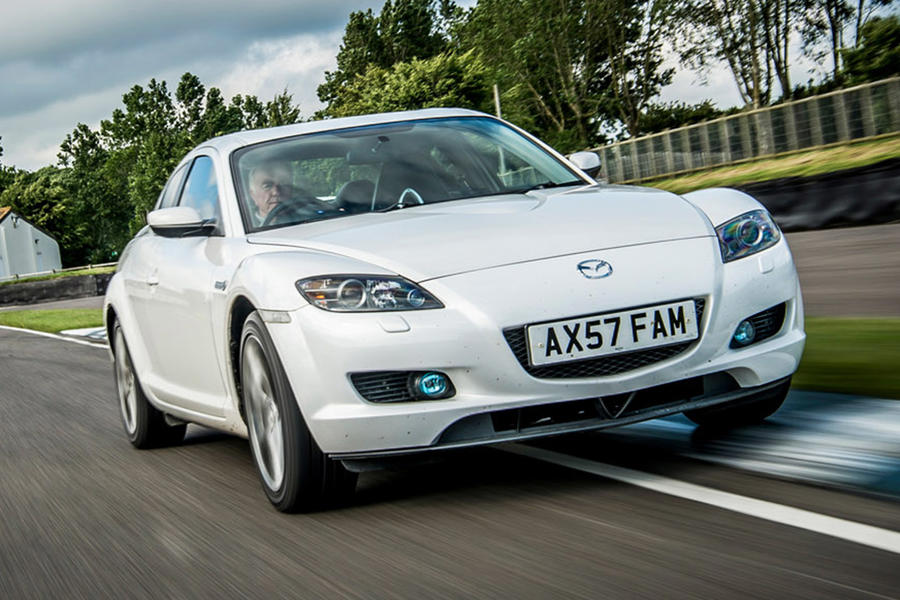 Perhaps one of the most underrated and overlooked high-performance cars of the past decade or so, the rare Mazda 6 MPS is a proper sleeper sports saloon. With its subtle looks and relative lack of pedigree, this fast four-door was often passed over in favour of rally-bred rivals from Subaru and Mitsubishi. But with a 256bhp turbocharged 2.3-litre engine and four-wheel drive, the Mazda can monster the 0-62mph dash in just 6.6sec. Crucially, it’s even more entertaining in the corners, with a stiffened bodyshell and firmer suspension delivering real agility and adjustability. Overall it’s reliable, too, but check for a full history and that all the tyres have a similar tread depth – mixed rubber can cause expensive transmission issues. In fact, the only real problem is finding one. 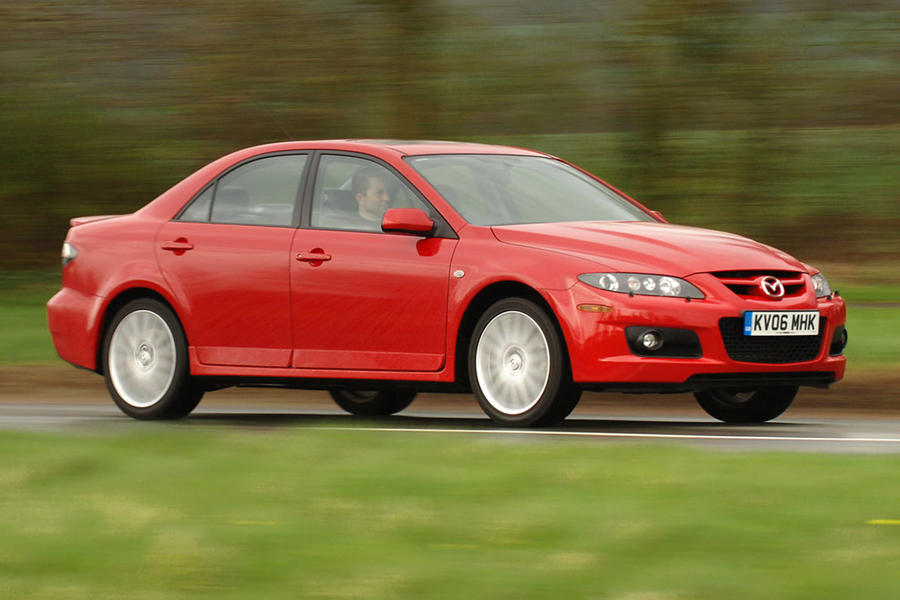 Mazda’s crossover roots can be traced back to the 2007 CX-7. It combined the high-riding stance and practicality of an SUV with the turbocharged 256bhp motor, six-speed gearbox and four-wheel drive system from the 6 MPS. It’s happy to be hustled, with strong grip and great body control, and it’ll humble hot hatches in a straight line. It’s not particularly frugal, but it is as tough as old boots. Prices start at less than £2000. 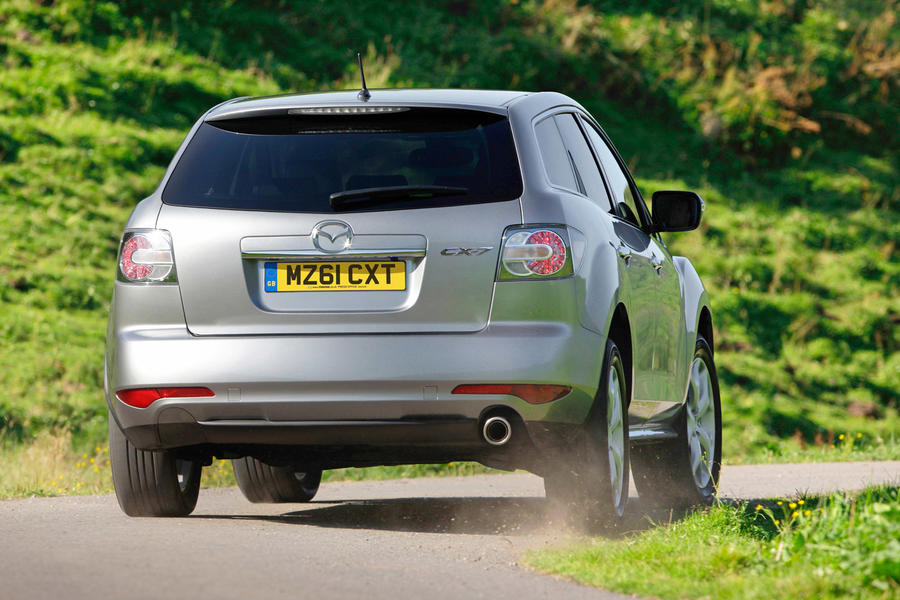 Gullwing doors? Check. Mid-mounted motor? Check. Composite body panels? Check. Welcome to the weird and wonderful AZ-1. This tiny two-seater was a kei car rival for the Honda Beat and Suzuki Cappuccino, and is madder than both. Its 63bhp 657cc turbo triple revs to 9000rpm, making it surprisingly brisk, and the skinny-tyred handling is hilarious. It’s cramped and there’s no luggage space, but few cars will attract as much attention. 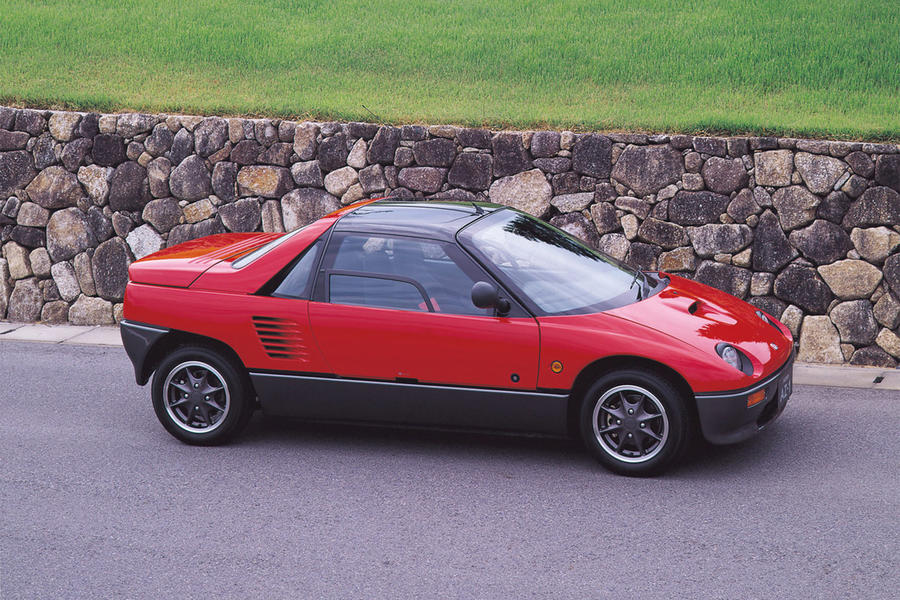 No Mazda buying guide is complete without an MX-5. The world’s favourite roadster has been around for three decades, but which model makes the most sense? Original cars are the purest but prices are rising as quickly as the second-gen models are turning to rust, while the latest version is still pricey. The sweet spot is the Mk3, known as the NC. It’s easy to live with and prices start at £3000. All are great to drive, but the 2.0-litre Sport is gutsier and has a six-speed gearbox and limited-slip diff. Post-2010 facelift cars have sharper handling and more standard kit. 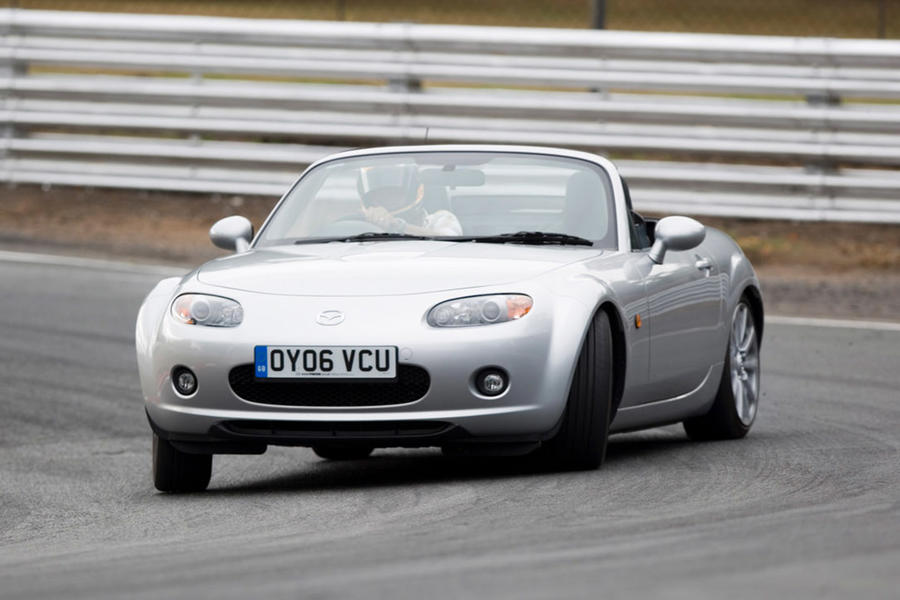 Mazda to move to petrol-only as diesel production ends

Mazda CX-3 removed from sale 'for the moment'