BACK TO ALL NEWS
Currently reading: Driving a V6-powered Mazda MX-5 Rocketeer
UP NEXT
The next Hamilton? Autocar meets F1 prodigy George Russell

There’s something wrong with this aural picture. I’m seeing a Mazda MX-5 Mk1 but I seem to be hearing a Jaguar F-Type, rich V6 blare, exhaust crackles and all.

The MX-5, the world’s most popular sports car breed, has always been a bundle of fun, but it has never been quite like this. What’s going on?

After all, through the MX-5’s 27 years and four generations, the factory has never built a really potent one. Never a turbocharger (except now, in Fiat’s version, the 124 Spider), and never more than four cylinders.

A missed opportunity? No, the factory has always said. The sports car has always been about lightness, simplicity and balance, not brute force and mad speed. Yes, the tuning industry has said, and backed it up with numerous forced-induction conversions plus, in the US, some shoehorned-in V8s.

However, very few have gone the V6 route – making the MX-5 Rocketeer you see here something of a novelty. It’s the brainchild of Bruce Southey: day job, a Ford ‘user experience’ engineer; previous life, a partner in Overfinch, which used to stuff huge engines in Range Rovers to great effect; hobby, designing interesting car stuff and making it work. Among previous projects was the engineering of the Bristol Fighter. 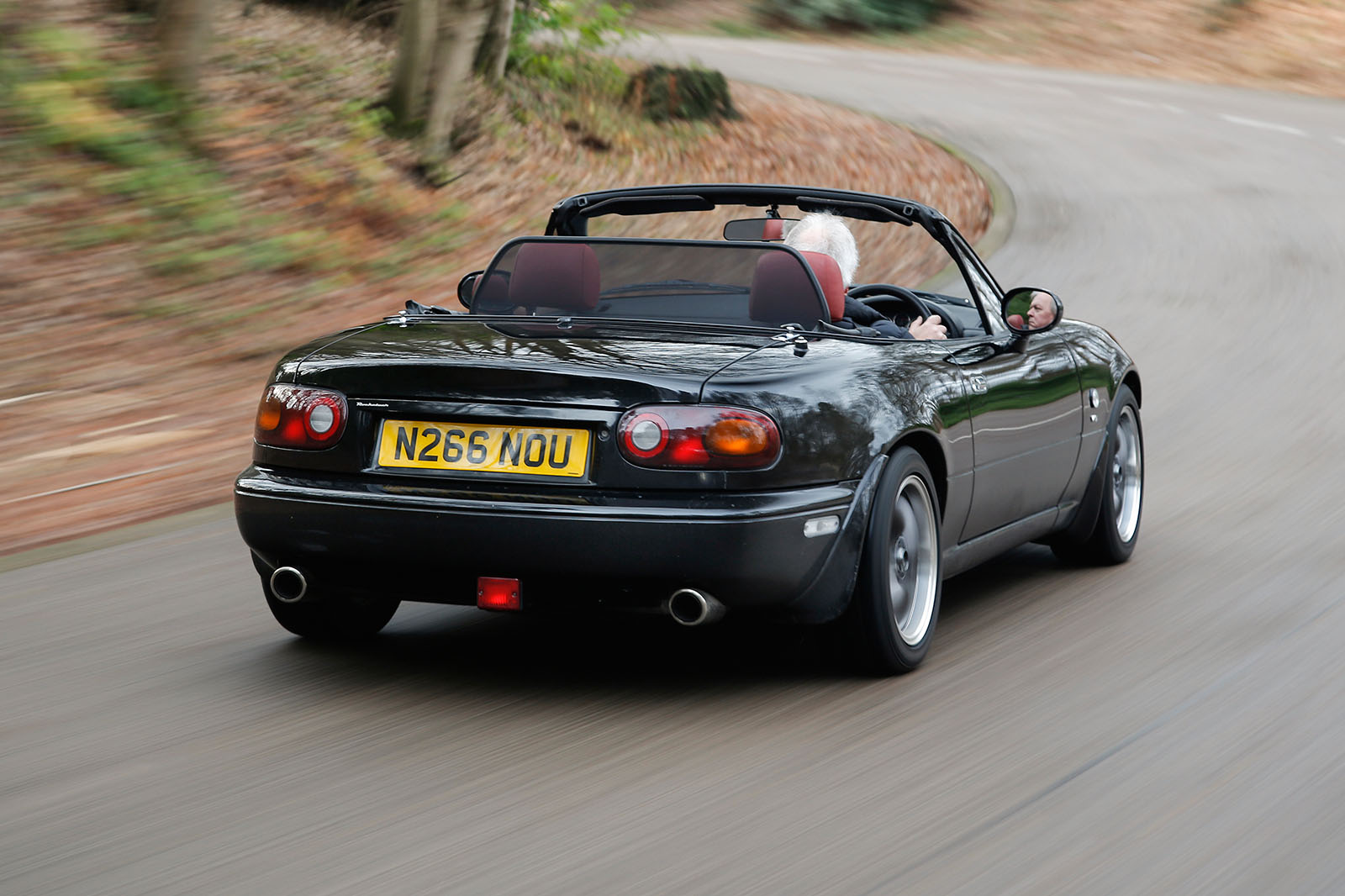 With an MX-5 in his garage that he wanted to make faster, Southey had a brainwave. “I love the MX-5,” he says, “so I wanted to keep what it has – the agility, the immediate response – and give it more. So not a turbo, and not a V8, which might overpower it. Something like an Alfa V6, maybe? Then I stumbled upon this engine, and I realised it would be ideal.”

This engine is the Jaguar variation of Ford’s Duratec V6, in 3.0-litre guise with 24 valves and, as installed in an early 2000s S-Type, 240bhp. Related engines powered various X-Types and the Ford Mondeo ST24, but the S-Type version’s longitudinal mounting makes it ideal for transplanting into the Mazda, as Southey’s 3D scan of it soon proved.

How ideal becomes clearer when you learn that the V6, with its aluminium block and heads, weighs much the same as the original iron-block Mazda motor. And with a suitable adapter plate, designed by Southey, it mates to the original Mazda gearbox, which is well able to take the extra torque. The original final drive is also retained, as are the original springs and dampers.

So what does change in the Mazda beyond its beating heart? Most significantly, the front subframe. The standard item leaves no room for the V6’s exhaust manifolds, so Southey has designed a new one with space where required but strength retained. It’s not on our one-off prototype, which uses a modified tubular item for V8 conversions, but it will be part of the Rocketeer kit that Southey plans to sell at £5995 plus VAT. To that, you must add the engine itself, readily available second-hand for a few hundred pounds, plus a second MX-5 1.8 throttle body and idle control valve. Or two of each if your starting point is an early 1.6. 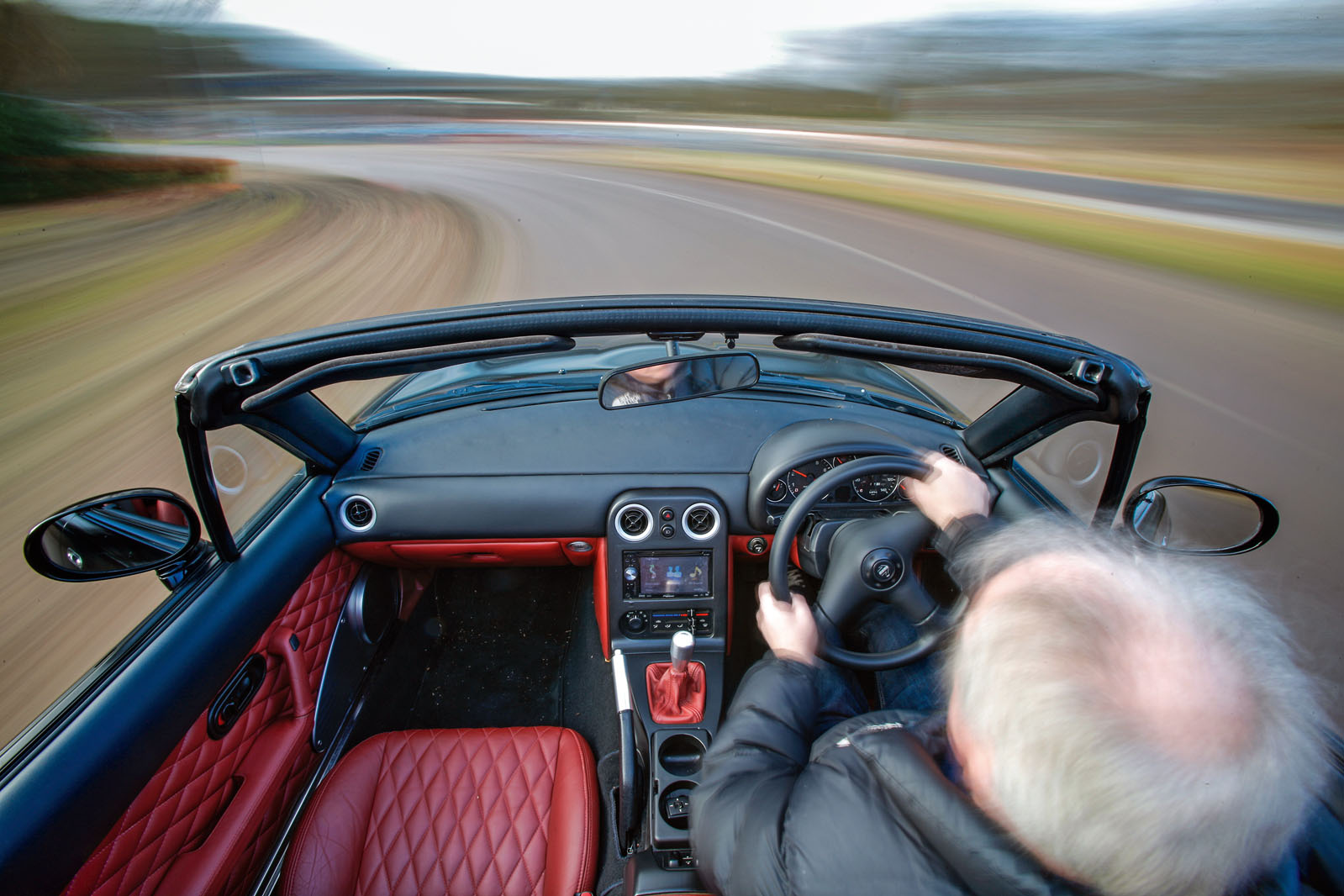 That sounds like a lot of money to shower on an old Mazda, but it makes sense when we look at what’s in the kit. First, though, what is a Jaguar V6-powered MX-5 really like? And would you want one?

Your resistance will weaken as soon as the engine catches. It blips keenly, its exhaust note a brassy blare with a crackling-crisp edge. This prototype has the six-speed gearbox that was optional in some early MX-5s, its shift less snickety than the five-speeder but the ratios closer. It’s not necessary with the V6’s torque, but it adds to the sense of near-continuous thrust.

There’s plenty of that, with rich pull from low revs right up to the limiter, all in a light car that seems to have very little inertia. This prototype is running on six small throttle bodies, whose intakes sit very close to the bonnet’s underside, a breathing restriction that flattens the pace after 6000rpm or so, but the Rocketeer kit will include a pair of proper carbonfibre plenums, fed by those MX-5 1.8 throttle bodies, and it should rev to the heavens.

Even as it is, the Rocketeer feels Porsche Cayman quick, it sounds fantastic and its chassis and suspension cope fine. There’s loads of grip, helped by 195/50 R15 Toyo Proxes T1-R tyres on wider Rota wheels, and great scope for steering ultra-accurately on the throttle in a way that a turbo conversion, or a nose-heavy V8, might not. The tail powerslides on an instant whim should the road be slippery, but it’s just as easily brought back into line. It’s a complete dynamic delight, and all the better for retaining the road feel that the standard, supple suspension offers. So what do you get for your money? You get the subframe, a plug-and-play engine loom and ECU compatible with all the MX-5’s electrics, a twin-pipe exhaust system including manifolds, the flywheel and sump (both fully machined, bespoke items), the adapter plate, an uprated clutch, the carbonfibre plenum chambers, an electric water pump and all the hoses, filters, brackets and fasteners needed. Plus instructions, of course. The kit is suitable for Mk2s as well as Mk1s, and a weekend or two should see the transplant completed.

Southey needs 25 deposits before he can trigger manufacture of the Rocketeer kit. Meanwhile, he’s building a second, Mk2-based prototype with representative pre-production parts. The first one is an absolute hoot to drive and I, for one, wish him well. You can find out more here.

In 2003-04 Mazda Australia homilgated a turbo charges Nb MX5 for Tarmac Rally use, Particularly Targa Tasmania. 100 were produced and it was named MX5 SP.
2004-2005 Mazda Japan got wind of it and made 6500 factory turbo models known as SE's or MazdaSpeed in the USA. They were not as quick as the Australian SP (smaller turbo) but were laden with great go faster bits, Bilstein Suspension, LSD and creature comforts.
I own one.
And love it!
si73 5 February 2017

Pricey but awesome, I often wondered why they never put the 1.8 mx3 v6 in the mx5 but this seems like a better option.
Will86 5 February 2017

First off, head over to YouTube and search mx5 v6 and you'll find a video of this car. Well worth listening to. And having listened to it I have decided I need this car in my life. Light, nimble, rear wheel drive and v6, lovely. As for the cost, it's not cheap but potentially you could have yourself a sorted version for around £10-12k if you did the work yourself and I suspect it would hold its value pretty well. Plus you'd be able to listen to that noise over and over again.
View all comments (7)