BACK TO ALL NEWS
Currently reading: Celebrating the endangered V8 engine in a Ford Mustang
UP NEXT
Handling by Lotus: revisiting the Kia Elan in 2021

Celebrating the endangered V8 engine in a Ford Mustang

The V8 engine is a dying breed. We champion the normally aspirated eight-cylinder and soak up its appeal before it’s too late
Share
Open gallery
Close
Share story

Sometimes, certain things catch on not because they are insuperably better than anything else but because they just seem to make a little more sense. Hence the rise of the V8 engine – a baby bear’s porridge of an engine configuration if ever there were one.

For on paper, at least, there is nothing that readily explains why the V8 was so spectacularly popular that it effectively came to power an entire continent. There is no black magic here, no killer consequence to arranging two pairs of four conrods on a crankshaft, usually (but not always) at a 90-degree angle to each other.

The truth is somewhat simpler. Which is that when the V8 really started to catch on in America in the 1930s, it was because that was the cylinder count that provided what customers wanted in terms of power and smoothness without those things they did not, such as needless complexity, expense and inconvenient external dimensions. And it was on such a prosaic basis that what I would contend was the world’s favourite engine configuration was born. 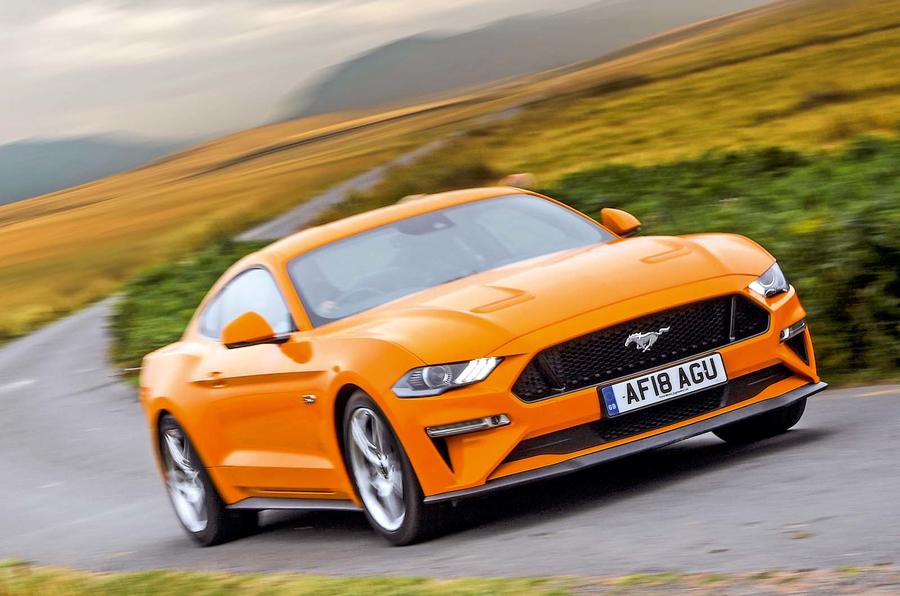 Of course, we don’t think about V8s that way at all. When we think about V8s, we think about one thing above all others: that noise. We all know it when we hear it. There are actually some quite august treatises published in erudite engineering journals that seek to explain exactly what it is about that burble that we find so appealing. They talk about pulses, tones and phases, irregular firing intervals and so on. There doesn’t seem to be much they can agree on, though.

The only common thread apparently linking them all is that, ultimately, no one really seems to know. Or maybe I just don’t know how to read and interpret such lofty literature, and maybe I don’t need to: I have absolutely no idea why the sausages I buy from my local butcher taste better than sausages I buy anywhere else. I just know they do, and that, surely, is enough.

It certainly was earlier today as I was threading my way across rural Wales in the Ford Mustang, its 444bhp 5.0-litre V8 thrumbling away happily to itself. There is very little I don’t love about this car, but what strikes you most is how the entire car is configured as a support system to that engine. 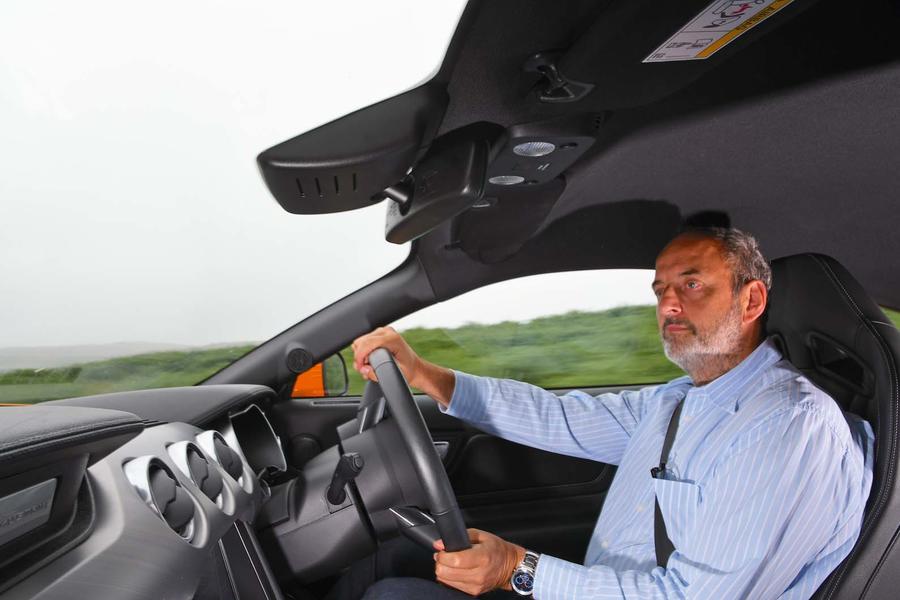 Other cars aren’t like this: drive an Alpine A110 and you’ll realise within yards that its engine exists as a tool, an enabler you use to make the most of its exquisite chassis. The Mustang is the reverse because, although Ford offers a four-cylinder engine for those poor souls who merely want the image of driving a Mustang, it realised from the day the pony car was invented in 1964 that the V8 has been the key to its character. To drive one without a V8 is to defeat its point as completely as drinking alcohol-free beer or decaffeinated coffee. 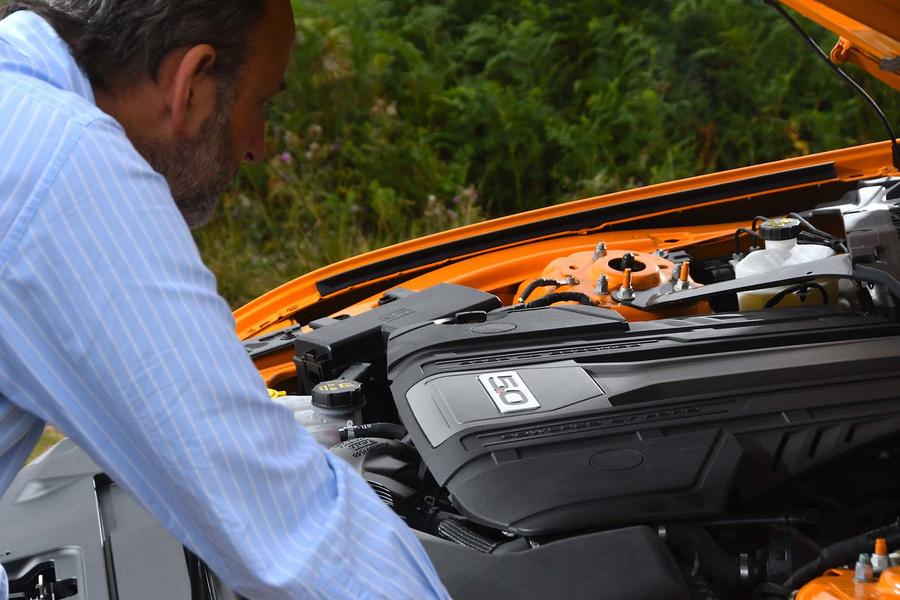 And now the V8 is dying. You may look at all those V8-powered Audis, Bentleys, BMWs, Ferraris, Jaguars,  Land Rovers, Maseratis, McLarens, Mercedes and Porsches and wonder what I think I’m talking about. And I guess what I mean when I say the V8 is dying, I mean the V8 in its natural and naturally aspirated state. Fitted to cars on sale in the UK, Ford has this one, Lexus has another, Maserati had a third – until the ancient Gran Turismo bowed out of production – and, of course, Chevrolet still uses V8s in the Corvette and Camaro. But that’s it.

Time was when every single manufacturer named above (save McLaren, which didn’t exist) had normally aspirated V8s in volume production. They’ve all gone in the interest of the lower on-paper emissions, higher specific outputs and instant-gratification torque curves that turbocharged motors provide. By comparison, that noise is not much of a priority to most, any more than is the samurai-sword-sharp throttle response. You can have the power, torque and noise with supercharging, of course, and Jaguar Land Rover does, but not for very much longer. 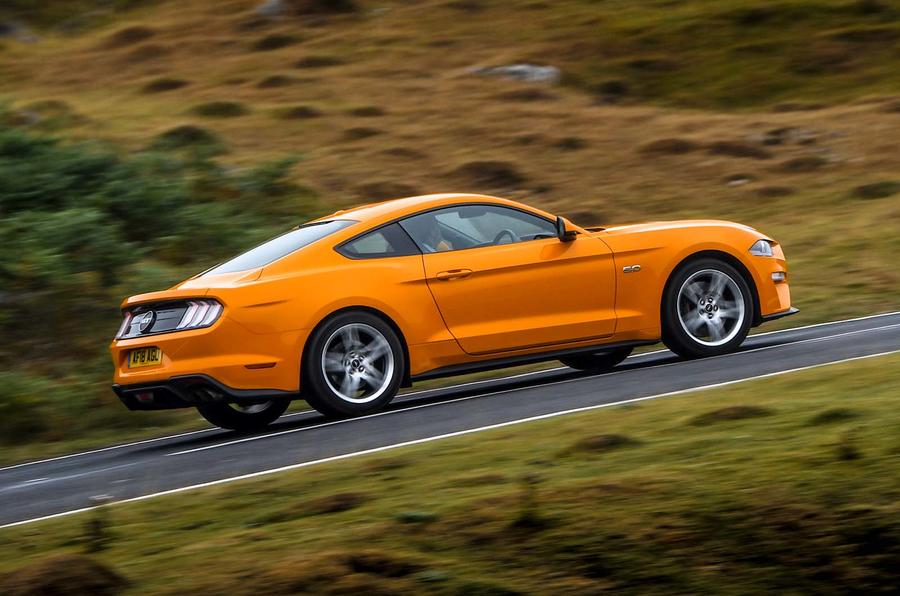 Although we may not know why the V8 sounds so mellifluous to our ears, we know exactly what was done to it to make it that way. Just as Percy Spencer never intended to invent the microwave oven when he walked past a magnetron with a bar of chocolate in his pocket and had to change his strides, so those who first started designing cross-plane crankshafts for V8s did so for reasons that had nothing to do with creating that noise.

The truth is that V8s didn’t always sound that way, and some still don’t. Racing and ultra-high-performance V8s, such as those used by Ferrari and McLaren, have the same simple crankshaft layout as the very first V8s, conceived before World War I. The problem with their so-called flat-plane configuration is you get double the secondary vibration of a four-cylinder engine, because that’s essentially what they are: two four-cylinder engines sharing the same crankshaft. And in America between the wars, as engines grew bigger to provide the power required to do the enormous distances at reasonable speeds, so the problem just got worse. 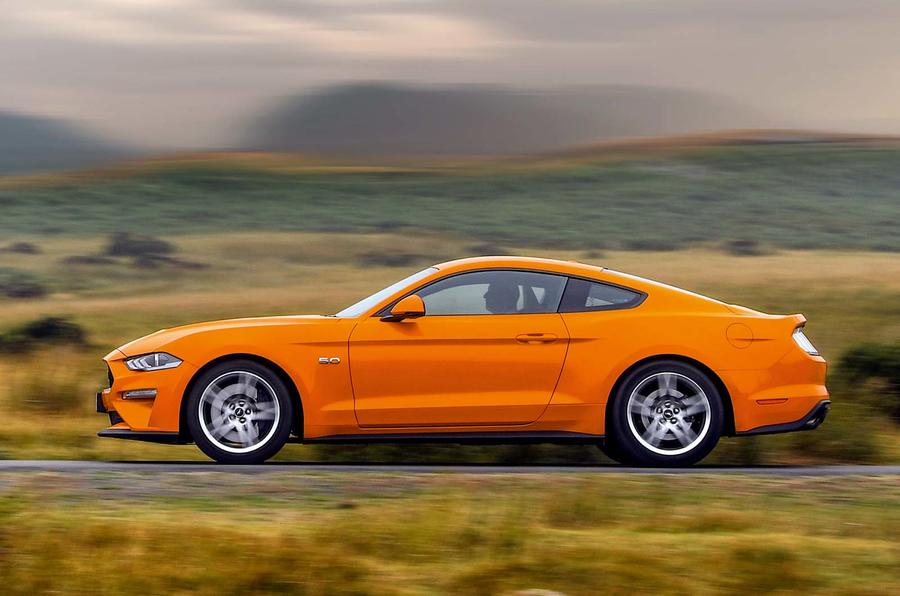 But by spacing the firing intervals at 90 degrees rather than 180 degrees and creating a crankshaft shaped like a cross when looked at end-on, these issues all go away or, more accurately, are reduced to a point where they are no longer problematic. So why aren’t race engines designed this way? Because left unattended, a cross-plane V8 would rock itself right out of the engine bay and across the road at the first decent blip of the throttle. Happily, this tendency can be addressed by the use of counterbalance weights, but, weights being weights, they are heavy and add to an engine’s inertia. Which is why cross-plane V8s weigh more, are less willing to rev and generate less power than flat-plane V8s. But they do sound gorgeous…

Few more than this one. You see, a decent V8 is not just a sound: it is a constantly changing variation on a much-loved theme. The Mustang sounds one way when you blip the throttle to equalise the revs on a downchange and another when you do the same, but parked at the traffic lights, just because you can. It makes one glorious noise at 5000rpm with your foot hard down, quite another as it passes back through 5000rpm on the overrun and a third if you just hold it there, as you might when balancing the throttle mid-corner. 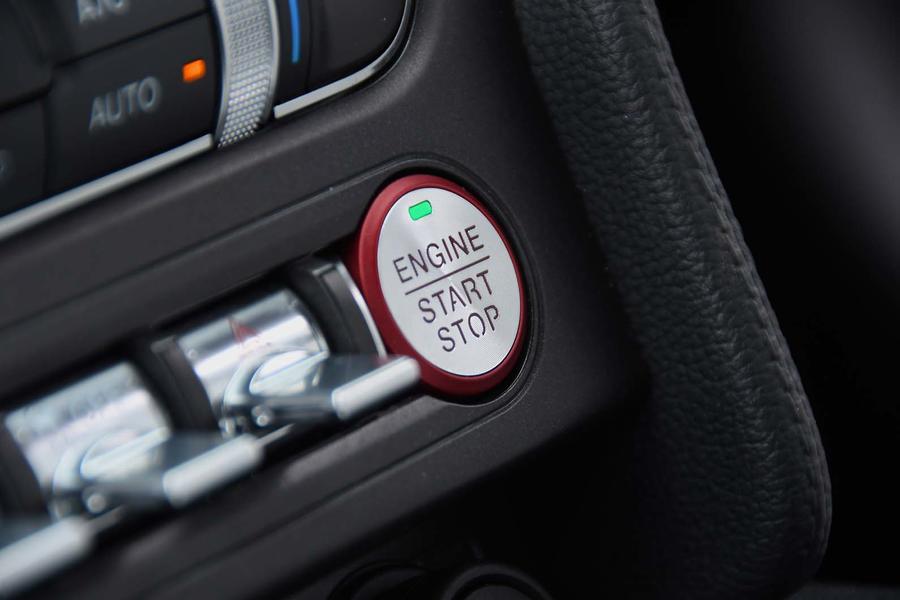 There’s something else, too, about the unadorned V8: it has a simple honesty to it, a blue-collar kind of class that’s not just charming but also effective. When Ford met Ferrari at Le Mans in 1966, the Scuderia brought its gorgeous P3 with its jewel-like light-alloy V12 engine with four overhead camshafts, six twin-choke carburettors and twin ignition. Ford? All it had was an old cast-iron pushrod V8 fed by a single Holley carb. But while the Ferrari engine was a svelte 4.0-litre motor, Ford waded into battle with 7.0 litres.

And that was the kind of advantage all the cylinders, camshafts and carburettors in the world was never going to overcome. Ford came first, second and third, while all the factory Ferraris broke trying to keep up. Never did that American adage ‘There ain’t no replacement for displacement’ ring truer. 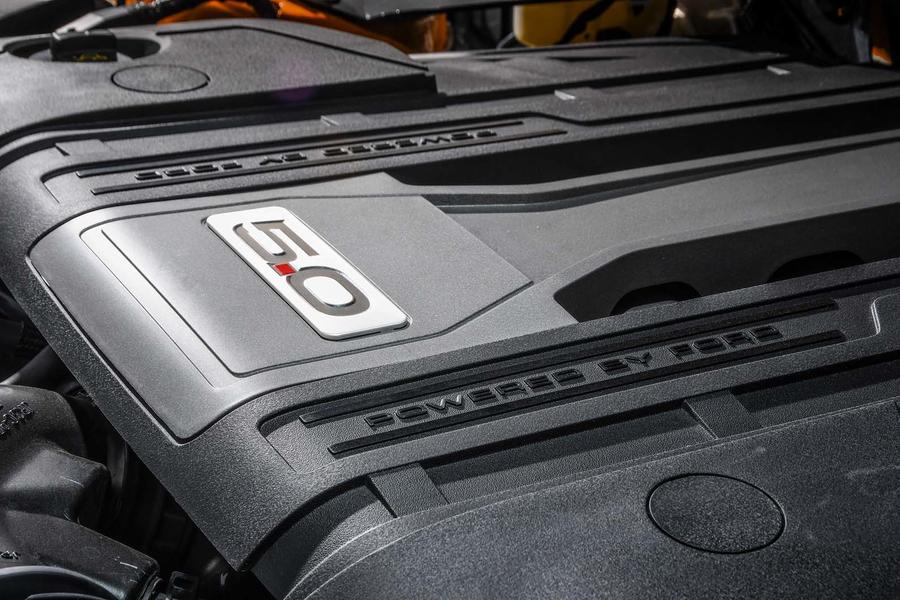 But they didn’t have turbochargers in 1966, and today turbos have proven a very effective replacement for the normally aspirated V8. Some turbo V8s – and I’m talking those with cross-plane cranks – are immensely effective and sound pretty wonderful, none more so than those made by Mercedes, and while these are objectively way better engines than they would have been without forced induction, you don’t need long in the Mustang to be reminded of what has been lost, too.

I expect that in 10 years, the only normally aspirated V8s left in production will exist for novelty value, if at all. And we’ll be walking down the street, hear that far-off thunder as some old crock with a bent eight breathing at atmospheric pressure rumbles past and we’ll mourn something else that has been lost from the joy of motoring in the interest of ‘progress’. For now, though, it’s all very well to read and write about proper V8s, but there’s nothing to compare with having one at your command. So if you’ll forgive me, and while I still can, I’m going to stop scribbling, fire up the ’Stang and go for one last blast.

This article was originally published on 3 November 2018. We're revisiting some of Autocar's most popular features to provide engaging content in these challenging times.

No mention of Dodge (FCA)?

Writing from the USA, Dodge is certainly carrying the V8 torch, both naturally aspirated, and forced induction.  I don't know if any product is being sold in the UK, but the Challenger/Charger models, along with the Chrysler-branded "300" sedan are offered here with a variety of V8's ranging from the 5.7L up to 6.4L, and including HP ranges up to 700!

I know some of the LX-platform products were sold in Europe.

BTW, in the USA, Ford has decided they will no longer sell any sedans or "car"-type hatchbacks, with only the Mustang carrying on.  Only Ford-branded SUVs and trucks for us apparently...

The V8 was a very nice thing and that's kinda at odds with life for the ordinary person in the UK either now or previously, "we" were lucky to have got an old Buick V8 from an american firm that no longer wanted it or found that aluminium was too esoteric a material for the times...it was never gonna be "built specifically for brits" if you get my drift.

V8s have always been a bit of

V8s have always been a bit of a novelty, thanks to high fuel prices. The US had the advantage of cheap fuel, something that could only do 10mpg was no big deal.

Even V6s are becoming a rare treat unfortunately, large cars like Octavias and Mondeos have 1 litre engines as options.