The inimitable Ford Mustang ‘pony car’ in 2018-model-year, entry-level, four-cylinder turbo form – and driven in the UK for the first time in that particular specification. Having brought us Brits an official factory-built, right-hand-drive Mustang for the first time in 2015, Ford has this year updated the legendary Mustang’s styling and equipment tally, and applied some tweaks to its engines and suspension.

Ford has also introduced the option of a 10-speed automatic gearbox available for both 2.3-litre four-cylinder and 5.0-litre V8 engines – although it’s the 2.3-litre manual we’re testing here.

Compare it with its pre-facelift equivalent and you may wonder how Ford has managed to update both engine and transmission, and yet can have allowed peak power, combined fuel economy and carbon emissions all to slip backwards – the engine’s headline output falling from 313bhp to 286bhp.

The explanation, as you probably won’t be surprised to read, has everything to do with the way that the European emissions testing regime has changed since the introduction of the pre-facelift Mustang; because the Mustang’s real-world performance is almost entirely as it was. 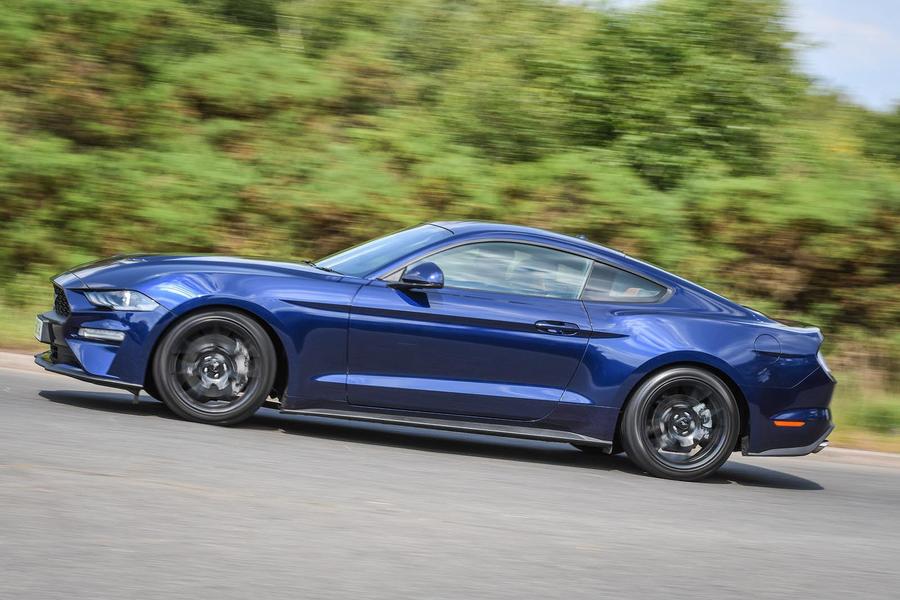 Ford’s midlife update to the Mustang’s styling is a fairly discreet but successful one, adding sharply drawn visual attitude to the car’s exterior while also lowering the car’s bonnet and reducing aerodynamic lift at the front axle for better high-speed stability.

The facelifted car’s probably easiest to identify by its revised front and rear bumpers, or by the twin vents that have been added to the bonnet. It looks a bit more tailored than its forebear, fitting into its European surroundings slightly more effortlessly than its predecessor – as you might expect of a car that’s maturing in showrooms and needs to begin to appeal in a more rounded way.

Ford’s efforts to add a sophisticated note to the car’s interior don’t succeed quite as well. Soft-touch materials now appear on the doorcards and centre console, while one or two higher-quality fittings feature here and there – but not widely enough to make a telling difference to an ambience that’s still a way off equalling the perceived quality of an Audi TT or Porsche 718.

The Mustang’s cheap-looking minor switchgear and its shiny low-level mouldings still betray the car’s American working-class roots pretty starkly. While the car’s new digital instruments are welcome for the flexibility they bring to the dashboard, meanwhile, they’re not in the same league as the latest digital displays from Audi, VW and Mercedes for graphical allure.

Having pressed the car’s glowing engine start button, it does seem odd not to feel the rotational fidget of a heavy crankshaft spinning into life, or to hear the delicious rumble of Detroit iron animated by your right foot. So much of the Mustang’s charm as a driver’s car flows from its dominant and effusive V8 that to take it away seems, at first, like removing the car’s greatest selling point. But at length you’ll find that the four-cylinder Mustang’s got very respectable performance, and plenty of sporting character of its own too – handling better in some ways than its bigger-engined sibling.

It helps, to begin with, that Ford’s 2.3-litre four-pot doesn’t sound so ordinary under the bonnet; it has an offbeat thrum that often makes it, at times, more redolent of a five-cylinder motor than an inline four. It’s responsive, too, and pulls hard enough through the middle of the rev range to make fairly light work of the Mustang’s kerb weight, delivering hot hatchback level in-gear thrust that’s more than enough to make the car fairly quick from point to point.

The Mustang’s size and mass make themselves more apparent in the way the car rides and handles than in the way it accelerates – but even here, the four-cylinder car might have an advantage over its V8 sibling. Though we didn’t have a current V8 for back-to-back comparison, the 2.3-litre Mustang had a nimbleness about its handling that you don’t expect to find in such a large car, and which we haven’t always found in bigger-engined Mustangs tested previously.

Turning crisply and feeling lighter on its feet than you might expect, the car corners quite keenly: a change that might owe as much to Ford’s midlife suspension revisions (retuned dampers, stiffer anti-roll bars, new rear suspension bracing) as it does to the relative weight of its engine compared with a V8. It feels balanced, lively and engaging, as you’d hope any rear-driven coupé would, and has a well-met blend of power and outright lateral grip.

The car rides well enough, although without the deft close body control or clever meeting of comfort and poise of some of its European sports car rivals. 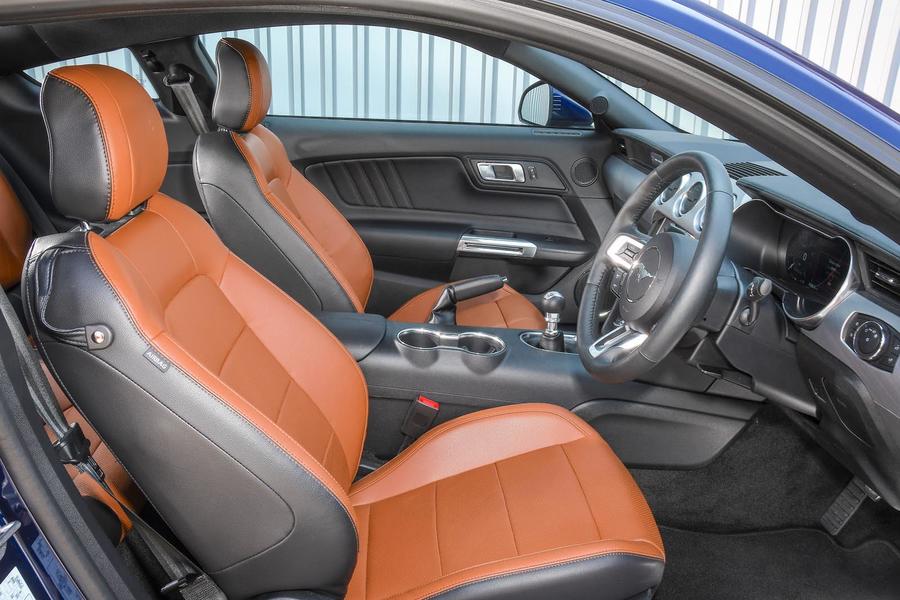 Even though it’s now available through official channels with a steering wheel on the correct side of the car, the Mustang remains the kind of car you’d probably own once, and enjoy enormously while you had an itch to scratch.

That being the case, it’d be a mistake only to half-commit and end up with this four-cylinder version, because it doesn’t conjure a driving experience of the same memorable and dramatic sense of occasion as the V8 does.

In terms of both its performance and its handling appeal, the Mustang 2.3 Ecoboost is good enough to pleasantly surprise those who do see fit to decline the bigger engine. I’m just not sure either are a good enough reason to do that. 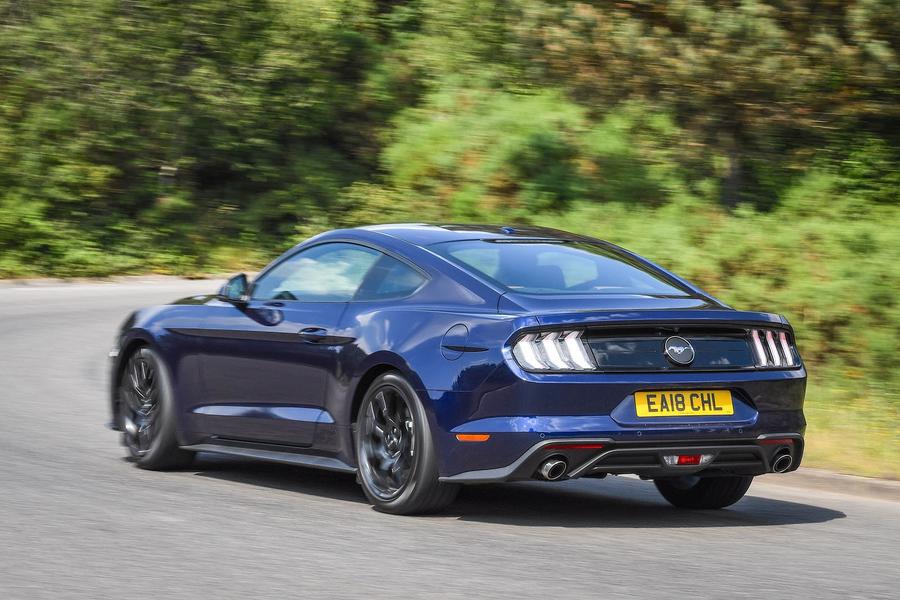 Looks nice in a Dark color, but lighter colours make it look huge!, not convinced by the rear apron, bit Friday Car.....

Nice to see an honest, informed, non-judgemental contribution...what else ya got?.

There's something endearingly naff about it. Like a car your uncle would buy if he had a win on the pools but it wasn't quite enough to change everything. The words Mustang and Ecoboost should never be seen together. Then i read the stats, 5.8 to 60? Only a few years ago that be considered outrageous.

The interior is so so horrible. Has to be one of the cheapest looking ones out there.

The interior is so so horrible. Has to be one of the cheapest looking ones out there.

I find the idea that a Mustang has a European rival distinctly odd.

Surely you buy a pony car or muscle car precisely because it is different to a European car? A Mustang’s true rivals are the Camaro and the Dodge Challenger, not the Audi TT.

It’s really hard to believe that anyone would consider a Cayman, for example, as a rival to a Mustang. Both are great, but definitely not competing with each other.

That’s why all the comments about differences in interior design etc are so wide of the mark. You buy a Mustang because of the silhouette, the cultural connotations and the V8. You buy a Cayman because of the design, dynamics and pedigree.

There is no ‘comparison’ to be made. You may as well compare wine to beer. It’s just totally different.

I find the idea that a Mustang has a European rival distinctly odd.

Surely you buy a pony car or muscle car precisely because it is different to a European car? A Mustang’s true rivals are the Camaro and the Dodge Challenger, not the Audi TT.

It’s really hard to believe that anyone would consider a Cayman, for example, as a rival to a Mustang. Both are great, but definitely not competing with each other.

That’s why all the comments about differences in interior design etc are so wide of the mark. You buy a Mustang because of the silhouette, the cultural connotations and the V8. You buy a Cayman because of the design, dynamics and pedigree.

There is no ‘comparison’ to be made. You may as well compare wine to beer. It’s just totally different.

If the person with the cash to spend, decides that the Mustang competition includes, whatever the heck they might otherwise buy, who is anyone to criticise?. When you get around to spending your cash, don't let anyone tell you otherwise. Oh and the "true rivals" are not available in the UK, in any event...didn't you know that?.

I smile every time I see one,

I smile every time I see one, because it isn't yet another bland, boring euro box in silver or grey, like the other 99.9 % of cars.

Not a fan of it especially,

Not a fan of it especially, but to slate it cos its perfectly good engine doesnt fit with some people's perception of what engine a Mustang "should" have (despite that fact that its been fitted with 4s, 6s and 8s through out it many guises) seems pretty stupid, especially as its "good enough to surprise".