From £33,7058
Sixth-generation Mustang gets a leaner face, revised suspension, improved safety equipment and a more powerful V8. We see how it fares on southern French roads
Open gallery
Close

Put simply, the Ford Mustang is a great way to stick out like a sore thumb. It’s big, it’s brash, and with a 5.0-litre ‘Coyote’ V8 under that long bonnet, it’s not what you’d call quiet, either.

And, for 2018, it has been facelifted. Well, facelifted is a fairly loose term here, as the changes to this sixth-generation Mustang - the first to be engineered with right-hand drive in mind - go largely unseen. So there’s a new-look face, but also now a digital speedometer, more safety equipment to help boost that disappointing two-star Euro NCAP safety rating, the option of a 10-speed automatic transmission and, perhaps most importantly, more power from that V8.

Thanks to the introduction of a new dual-fuel, high-pressure direct-injection and low-pressure port fuel injection system, the Mustang now develops 444bhp at 7000rpm. By comparison, the original sixth-gen Mustang’s 5.0-litre V8 developed 410bhp. Torque remains the same, at 390lb ft from 4600rpm. Coupled with the gearbox, Ford claims it’s updated fastback is good for a 0-62mph time of 4.3 seconds and 155mph.

Ford’s engineers have also worked to sharpen up the Mustang’s handling characteristics. The shock absorbers have been re-tuned for greater stability through the twisties, while a new cross-axis joint helps to stiffen up the rear suspension. An adaptive MagneRide damping system has also been made available, although it’ll set you back £1600. 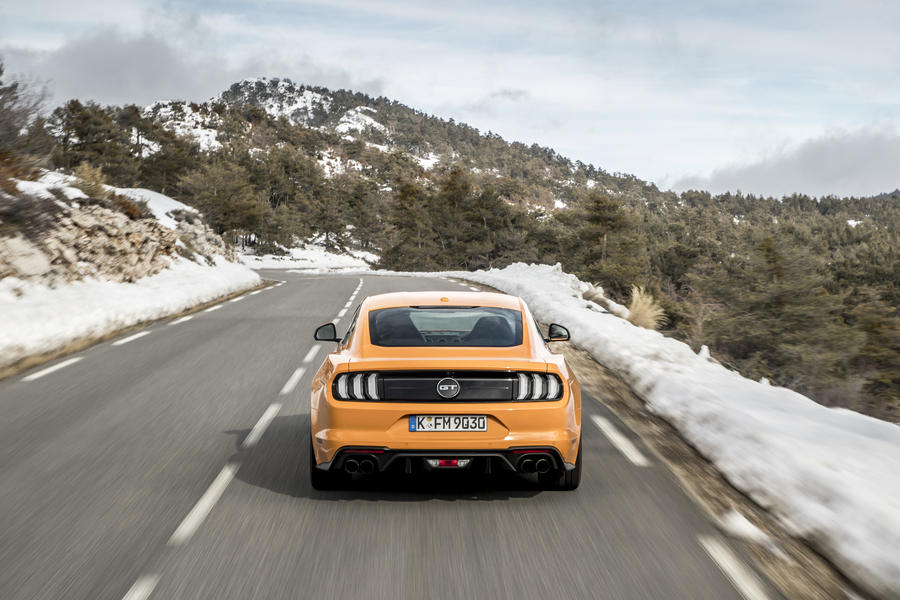 Measuring a smidge under 4.8 metres in length and 2.08 metres in width, you’re certainly conscious of the Mustang’s on-road footprint - more so in tight inner-city environments. It’s relatively heavy, too, weighing in at 1743kg with the six-speed manual and 1756kg with the optional ten-speed auto.

Then there’s the engine, and what an engine it is. Naturally aspirated V8s are a fast-dying breed, and those few that are still available should be savoured. At anything below about 3500rpm, it’s a lethargic and laid back powerplant that burbles away with a soundtrack that’s not too dissimilar from the rumble of distant thunder. Prod the throttle in too high a gear and you’ll find you won’t be heading anywhere too quickly. It’s an engine that requires a fair amount of manual labour on your part; you need to be on the ball with your shifts if you plan on making any progress. Thankfully, the six-speed manual is short in its throw, well-weighted and precise enough for the task of keeping the crank spinning at its optimal level.

Get it right and the engine’s cruisy character changes into one that’s far more savage. Throttle response feels almost immediate and when you do bury your right foot, you’ll find you reach the national speed limit in an alarmingly short amount of time. Almost as alarming is the engine note, which transforms from that deep, baritone burble into a spine-tingling roar as you reach the upper climbs of the rev band. It’s not quite as raucous as, say, Jaguar Land Rover’s supercharged 5.0-litre V8, but it’s certainly no less appealing to this tester’s inner child - particularly with the active exhaust set to its loudest, most anti-social setting.

It’s worth mentioning at this point that we also had the chance to sample the smaller, more socially conscious 2.3-litre EcoBoost four-cylinder engine with the 10-speed auto. While it can’t hold a candle to its bigger, brasher V8 brother in terms of character, it doesn’t give the impression it’s lacking in power. There’s 286bhp and 325lb ft on tap, which allows for a 0-62mph time of 5.5 seconds. Thanks to its twin-scroll turbocharger, that torque is available from 3000rpm, so it’s a bit more accessible than in the V8. The automatic does a good job of swapping cogs smoothly, and will drop down a handful of ratios when you engage kick-down. Paddleshifters allow you to take full control of the transmission, and our only complaint here is that it can be a bit sluggish on the upchange when you’re accelerating hard.

Handling-wise, the Mustang has suitably heavy steering, which weights up depending on the drive mode you’re in - either Normal, Sport+, Race. There’s not a great amount of feel to be extracted from the rack, but it’s quick without being razor-sharp and is well-suited to the car’s larger, muscular character. The MagneRide dampers contain the Mustang’s portly body well through bends, without being so firm as to compromise its ride. Sure, it’s a touch jittery at low speeds, but it’s far from uncomfortable. There’s a commendable amount of grip, too, although the back end will still step out if you fancy driving like a bit of a wally. It’s definitely more of a sledgehammer than a laser-guided tool of unparalleled precision, but we mean that in the best way possible.

Cabin-wise, the Mustang doesn’t quite occupy the same sphere of material quality as a £40,000 BMW might, but it’s far from disappointing. The new digital instrument display is sharp in its resolution and fluid in its animation, although the SYNC3 infotainment screen does catch the sun and its location in a recess in the central dash can make it difficult to read. The bolstering on the optional Recaro seats can get in the way when changing gears, too.

Those small gripes aside, though, the Mustang is plenty comfortable; wind noise is minimal, and although there’s a bit of road roar from the 19-inch alloys, it still makes for an excellent long-distance cruiser. 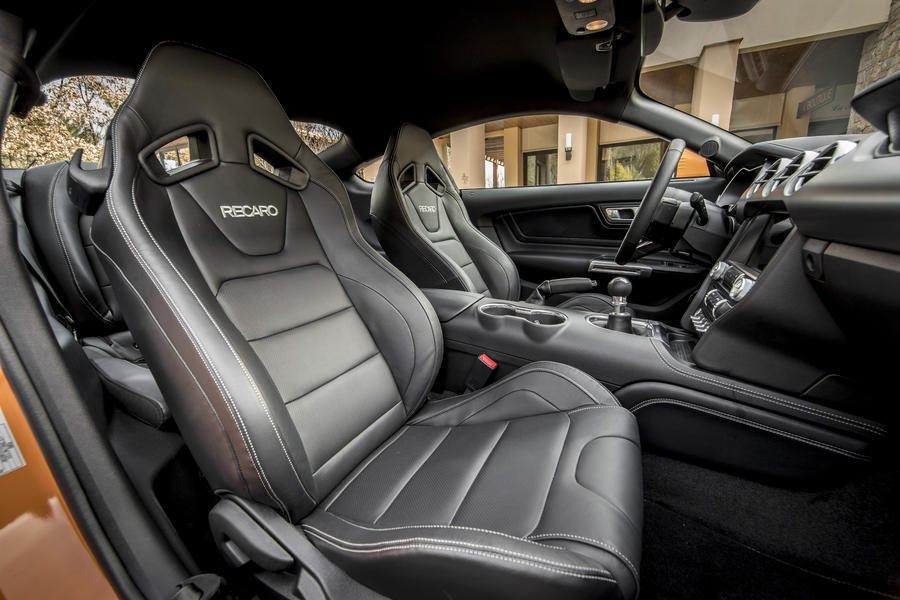 With prices starting just north of £40,000, the Ford Mustang GT 5.0 is practically in a class of its own. After all, what other V8-powered sports coupes can you buy new for that sort of money? Not many, if any.

A BMW M2 might offer keener handling, a more desirable badge and a more luxurious, upmarket interior, but that turbocharged six-cylinder engine is never going to be as characterful or spine-tingling as the ’Stang’s old-school V8.

Yes, it’s a bit of a dinosaur, and is by no means the sharpest tool in the shed; but It’s got the looks, the straight-line performance and a soundtrack that’s fast becoming a rarity in an industry fixated on turbocharging and downsizing. If you can stomach the 22.8mpg fuel consumption, it’s unlikely you’ll find the Mustang a disappointment. 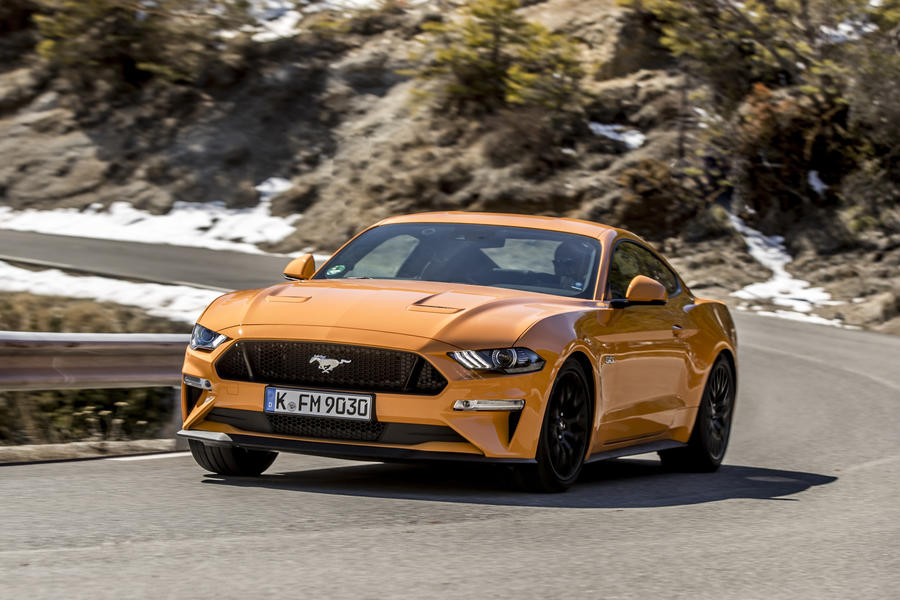 Unless you live in the mountains or get very harsh weather, you don’t need 4WD in winter. You just have to know how to drive.

Unless you live in the mountains or get very harsh weather, you don’t need 4WD in winter. You just have to know how to drive.

Not only that scrap, the RS3 is also sooooo anodyne in comparison. Ok, it finally has some music from its engine but nothing other than a V10 or V12 plus beats a V8's sense of occasion - at any speed. Plus, the 'stang looks the part. The RS3? You know those funny muscle guys who buy steriods off the tinterweb?.....

Try to find anything that looks and handles like it, comes with a superb V8 and precise manual transmission and gets the admiration it does from all ages for less money. There is nothing.  People know a good thing when they see it and are voting with their pocket books.  It's selling very well in Germany, the UK and the rest of Europe.  Understandably so. This iconic, American beauty is a legend.

I couldn't agree more with showman.

For that kinda money you won't find a car that comes even close to a ' Stang' - in my book anyway.

What a machine! Ford seems to be the only manufacturer that can compete with the best from Japan. Just superb.
View all comments (4)