BACK TO ALL NEWS
Currently reading: Behind the scenes at Jaguar Land Rover's Special Vehicle Operations
UP NEXT
Design tweaks and enhanced kit for 2021 Seat Ibiza

JLR's SVO arm does some extraordinary things. We visit its state-of-the-art base for a first-hand look
Share
Open gallery
Close
Share story

Your first thought when you step over the threshold of Jaguar Land Rover’s £20 million Special Vehicle Operations division in Ryton-on-Dunsmore, just outside Coventry, is that you’ve arrived in the foyer of a Formula 1 team’s headquarters.

The place has the same wall-to-wall modernity of a classy, new piece of industrial architecture, the same aura of forensic efficiency of a grand prix team and the distinct feeling that nothing here happens by accident or just the passage of time.

But whereas F1 teams make half a dozen cars a year and don’t build the engine, this place handles vehicles by the thousand. Managing director Michael van der Sande says SVO’s job is to take JLR’s already potent and luxurious models and “amplify” their characteristics, at times “turning them up to 11”.

Among manufacturers of premium cars, there’s a powerful demand for bespoke and specialist vehicles that seems currently to defy economic cycles. BMW has its Alpina and Mercedes has its AMG, and on this spot, where Peugeot once built numerous undistinguished 206s, specialist Jaguars and Land Rovers now start their lives. 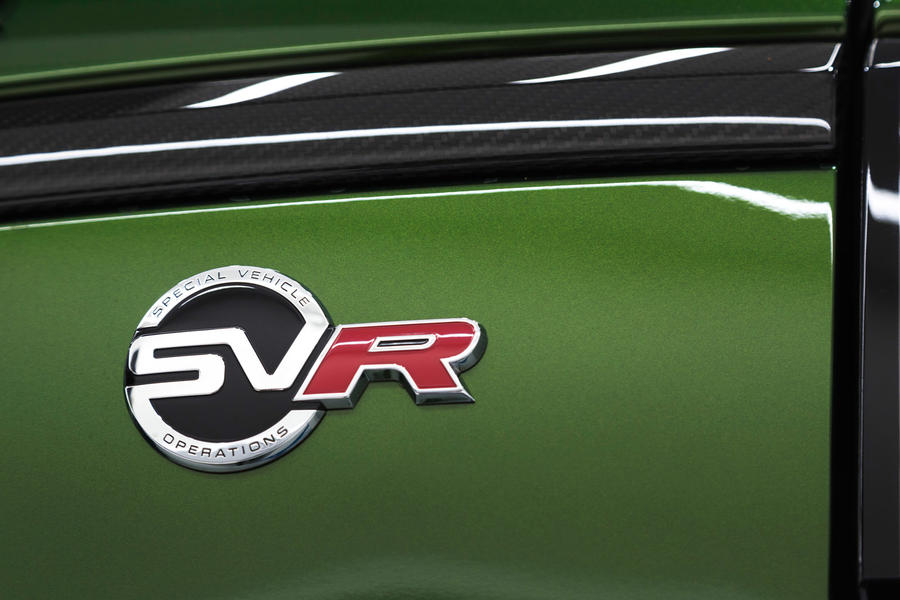 Then there’s the most common type, production SVR models whose enhanced packages still allow them to be made on JLR’s regular production lines; the Range Rover Sport SVR and Range Rover SVAutobiography Dynamic are good examples. Such cars, around 10,000 of them per year, don’t need a special trip through the new SVO Technical Centre, because they’re built to suit the facilities of JLR’s regular assembly processes.

And somewhere in the middle of these is a breed of standard cars whose owners desire only special paint jobs: SVO handles around 5000 of these a year and has an innovative robotised plant whose smart ovens, JLR claims, save enough heating to power 65,560 homes for a year. Quality is extraordinarily high.

The production-line SV models may not be built on SVO’s premises, but they’re still very much the business of van der Sande and his engineering director, Jamal Hameedi, whose spectacular pedigree includes time as the global engineering chief of Ford Performance, responsible for cars including the Focus RS and latest GT. They decide in the first instance exactly what these profitable and strong-selling SVR cars will be like and then set about developing them.

SVO’s contribution to group earnings is described by van der Sande as “very significant”, although nobody inside or outside the group will talk precise figures. It’s obvious, and becomes clearer as we walk around, that this is a very high-margin business. The most modified cars we come across, some kept secret until their owners see them for the first time, are akin to works of art and so can require months in preparation. 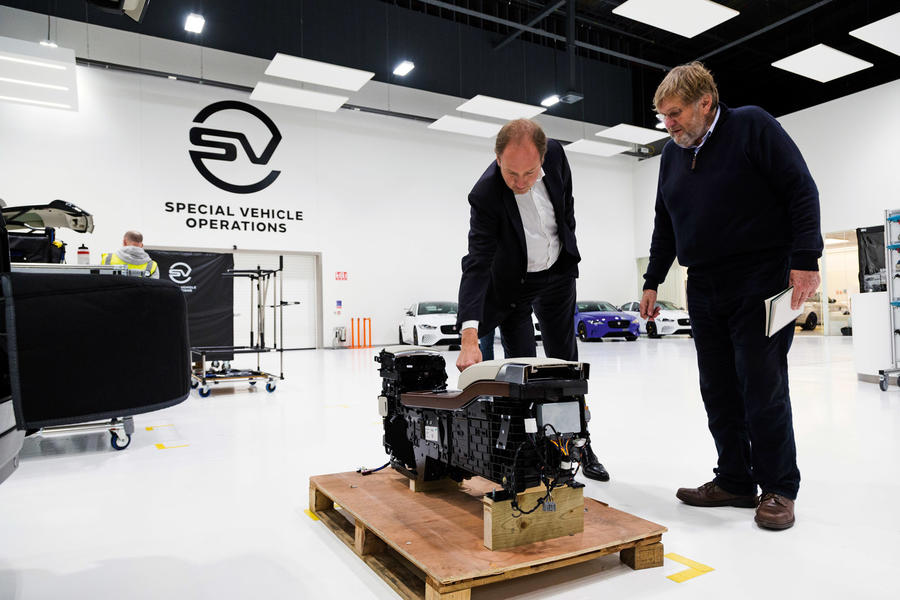 If you’re a serious bespoke customer here on a visit, you’ll probably be accompanied by someone from your local dealership. Having signed in, you turn right out of the foyer into a luxurious design suite where you can view, touch, feel and smell samples of paint and trim materials, fascia textures and badgework. This is where you propose and mock up – on a gigantic digital configurator – your desired vehicle. “People can spend up to half a day in here,” says van der Sande. “We encourage them to do it. And we often offer one of our designers to assist with choices. Clients usually find their suggestions helpful.”

Do customers ever insist on bad choices? According to designer Adam Hatton, who has particular expertise with bespoke projects, it’s rare. “Clients have strong likes and dislikes,” he says, “but they’re rarely adamant. We advise them, no more than that. In rare cases, we might emphatically discourage someone from making a choice we think they’ll regret. But we have to understand their priorities – that some apparently odd choices work better in different cultures and light conditions than the UK’s.

“It’s one reason why we usually issue high-quality renderings. They show what a car will be like with pretty good accuracy and they’re especially handy for people who can’t come to Coventry.”

Beyond the design studio is a spacious, sumptuously curtained meeting room, all carpets and soft sofas, where clients can relax, chat with SVO experts and eat food specially prepared by in-house chef Graham Edwards, a former protégé of Raymond Blanc, whose task is to create dishes that suit clients from all corners of the globe. As well as being a private meeting room, this can be a superb viewing room: the curtains roll back to reveal floor-to-ceiling glass walls displaying the well-lit vastness of the 20,000-square-metre Technical Centre’s car creation bays. 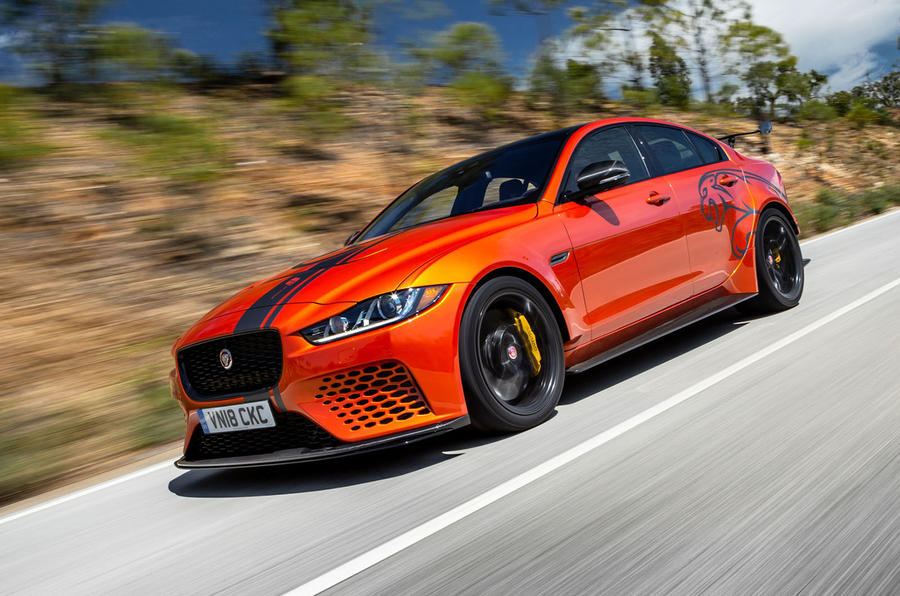 Immediately outside are the last handful of the Jaguar XE SV Project 8 super-saloons from the promised batch of 300 being prepared for delivery. This machine is van der Sande’s quiet pride and joy, not just because its 592bhp supercharged V8 engine makes it the most powerful road-legal Jaguar in history but also because of the extensive re-engineering it entailed.

“It’s very different from the base car,” he says proudly. “We even had to shift the headlights forward to make a bit more space. The Project 8 is a completely focused track car; only the bonnet is unaltered. We dialled everything else up to 11…”

Van der Sande views Project 8 as the perfect demonstration that SVO is just as well equipped for complex engineering as for amazing trim and paint makeovers. “You learn enormously from projects like this,” he explains. “They test the limits of a design. Lessons we’ve learned from the Project 8’s sealed aerodynamic floor are already being incorporated into the tooling of the next-generation models…”

Past this line-up of Project 8s, we turn right, staring into the well-ordered build bays, where big projects are proceeding under the hands of technicians whose very body language tells you they’re the best in the business.

On one side are armoured Range Rover Sentinels with reinforced floors and two-inch-thick armoured screens and side windows. They weigh four tonnes at the kerb yet still have the ability to jump kerbs and accelerate very quickly indeed. 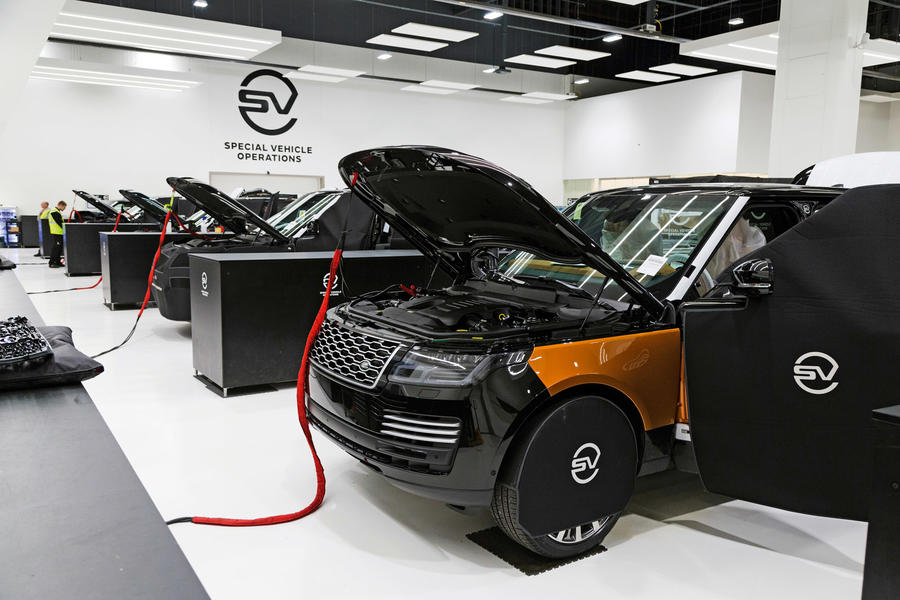 Across the wide aisle is possibly the most eye-grabbing Range Rover I’ve ever seen, brilliantly black-topped but with an extraordinary metallic colour on its lower flanks that flips between a luminous greeny yellow and a more subdued grey. It’s worth £15,000 on its own, I learn, and when you examine the flawless edges and lustrous surfaces, you can see where all that money goes.

This car is at Ryton for much more than painting. It’s to be completely retrimmed and equipped with a beautifully engineered SVO rear console (the work of Hameedi’s team) that contains all manner of storage spaces, screens, switches and ventilation outlets. It’s as expensive as the paint, we estimate, yet there’s a demand for 800 to 900 of these every year.

“You don’t just build that console and bung it in the car,” explains van der Sande. “You test its functions endlessly, then you fit it to test cars and you subject it to tough road trials. After that, it might be okay.

“Cars earmarked for major work come to us as primed and recoated bodies,” he continues. “We paint them, build them up and fit their complex body parts. It takes two weeks to paint and five or six weeks to build. And for the most complex jobs, like this one, you might need six to eight weeks more. We estimate five months for a job like this, then try to beat it by a week or two.”

How does van der Sande view the future of vehicle personalisation? The demand is durable, he believes, but the challenge is to meet the rising quality standards of customers while growing slowly. Launching new line-built SVR models is another challenge; the reason the company began at the top of its price list with the Range Rover SVAutobiography Dynamic, Range Rover Sport SVR and Jaguar F-Type Project 7 was that the potential profit margins were very generous. Even the most recent pair, the Jaguar F-Pace SVR and Range Rover Velar SVAutobiography, cost £75,000 and often much more once extras have been taken into account. 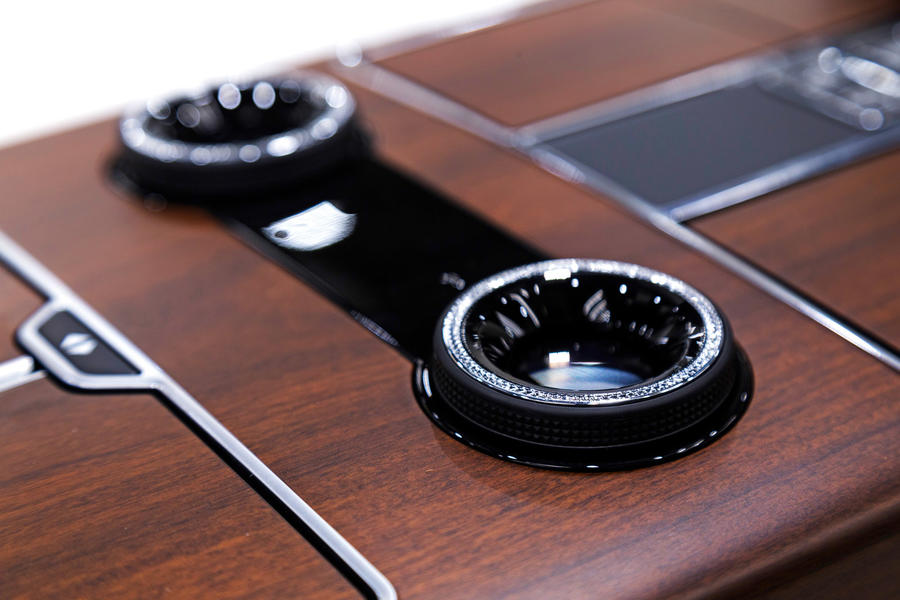 Would SVO ever do a Range Rover Evoque SVR? It’s a possibility, allows van der Sande, but not in the short term. SVO is limited by how quickly its engineering teams can grow.

“We’re in an intentional period of slow growth,” he says. “We want to build strong foundations, and we believe this is how you do it."

A boss who "always wants to deliver" 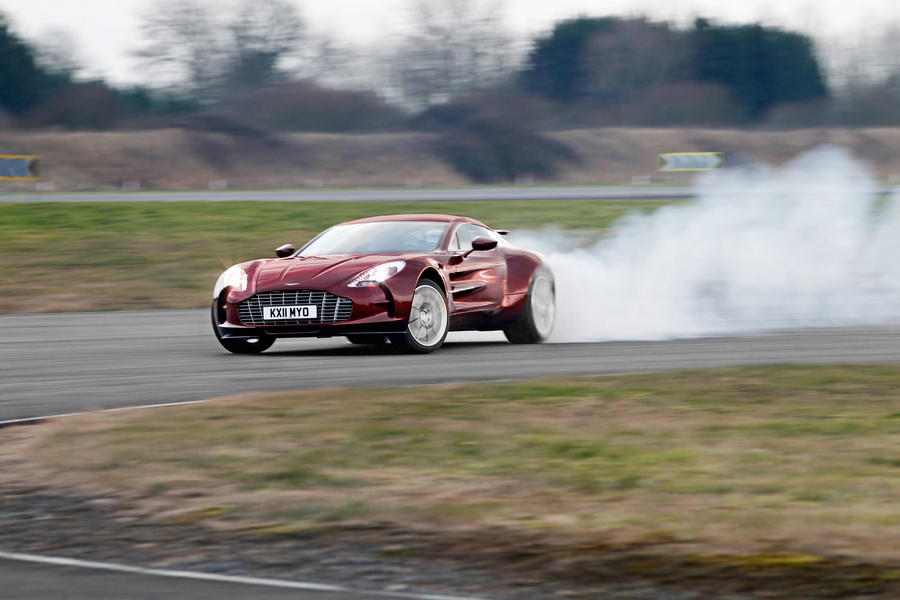 Michael van der Sande, managing director of SVO, has taken a more interesting path than most to reaching the job he loves. Dutch by birth, his mother and grandmother were rally drivers and one of his early girlfriends was a Ford dealer. As a kid, he made the key decision to follow a career with cars and arrived in the UK 25 years ago, landing at Bentley and Rolls-Royce in Crewe. From there, he began a 12-year marketing career with Harley-Davidson, working at the US firm’s headquarters in Milwaukee, as well as in Africa and the UK. He then took a one-year posting with Tesla as global director of sales and marketing before moving to Aston Martin “at the depth of the crisis” but still helped launch the Rapide and One-77. Next he spent five years in Paris with Renault, working closely with design boss Laurens van den Acker, before leading the launch of Alpine for two and a half years. In June 2018, he started at SVO, which he labels the greatest gig of all. “When you’re passionate about something,” he says, “you always want to deliver.”

Those photos look more front of house than behind the scenes - too spotlessly clean. Where is all the real modification work done and stock kept?