There’s very little about the fast, handsome Range Rover Velar SVAutobiography Dynamic – apart perhaps from the record-breaking 16 syllables of its name – that comes as a shock.

Once it was established last year that the ‘base’ Velar was one of Jaguar Land Rover’s successes (66,000 sold so far) and that the mechanically similar Jaguar F-Pace SVR was also doing well for JLR’s Special Vehicle Operations department, it became pretty clear that a higher-performance Velar was on the cards.

Not that the new Velar SVAD was ever likely to be sold as a mere ‘hot Velar’. Land Rover has been successful at avoiding a ‘cookie cutter’ approach to Range Rovers – which it now offers in three sizes – and the same goes for this new SVAD, which has been developed with refined, supple long-distance luxury in mind, not merely to be a Range Rover that’s faster than yours. Or your Alfa Stelvio Quadrifoglio or Porsche Macan Turbo – two obvious competitors – for that matter.

Jaguars and Range Rovers from JLR’s SVO unit come in distinct strands: there are the SVRs, which stress performance, and SVAutobiographys, which stress luxury. This new Velar Dynamic Edition combines the two philosophies at prices from £86,685. The production run is limited to a year for reasons that became a little clearer on the day we tested the model near Barcelona: Ford announced plans to close its Bridgend engine plant, the regular source of JLR’s V8s. Jag V8s are believed likely to keep flowing for a while from a new production facility at Wolverhampton.

The Velar SVAD engine is JLR’s respected but familiar 5.0-litre supercharged V8 that produces a meaty 542bhp, with 502lb ft of torque, which is directed through an eight-speed automatic gearbox and a permanent four-wheel-drive system. All the usual driving modes, traction controls and hill descent gizmos are present and correct, with the standard Velar’s air suspension units reduced in volume to increase their basic spring rate for sportier (but still height adjustable) performance.

The SVAD rides on standard 21in wheels – nothing smaller is possible because it also gets bigger SV-spec disc brakes all round – but a 22in option is available. Land Rover insiders prefer 21s for semi-serious off-roading to limit rim damage. In both sizes the wheels are forged, which gives them extra strength and cuts weight by an impressive 2.5kg a wheel, benefiting ride quality as well as kerb weight.

The Intelligent Driveline distributes engine torque according to driving conditions, but though it can send 100% to the rear wheels if necessary, the SVAD set-up is more ‘balanced’ than the Jaguar SVR, which sends more torque to the rear, more of the time.

Land Rover isn’t especially helpful with performance figures but the SVAD’s claimed 0-60mph sprint time of 4.3sec chimes exactly with that of the Jaguar SVR (same size and platform), which leads you to believe that this special Velar weighs the same two tonnes as the Jag, and can reach around 170mph flat out.

The standard Velar is already well regarded for its beauty, so changes to the styling have been carefully made. The SVAD gets new bumpers: in front they incorporate a more prominent splitter, extra lower air intakes and a new, higher airflow grille; at the rear an impressive quartet of slanting, squared-off tailpipes that are a visible sign of an exhaust system that has been specially tuned for a deeper, less aggressive sound than the Velar’s hot-Jag relative.

Along the lower sides, the SVAD gets subtle side panels that give the model a wider, more ‘planted’ look. The task, say designers, has been to make the car look purposeful without disturbing its luxury appearance.

Interior changes are similarly carefully judged. Land Rover designers are proud of their car’s minimalist philosophy, and in the SVAD this is maintained. The model gets a subtly thicker wheel rim, new quilted and twin-stitched 20-way adjustable seats in Windsor leather, knurled knobs for its major controls and aluminium gearshift paddles. There’s also a great-looking carbonfibre pack for interior trim that incorporates a distinctive steel weave. Luxury is enhanced without the simplicity being disturbed. 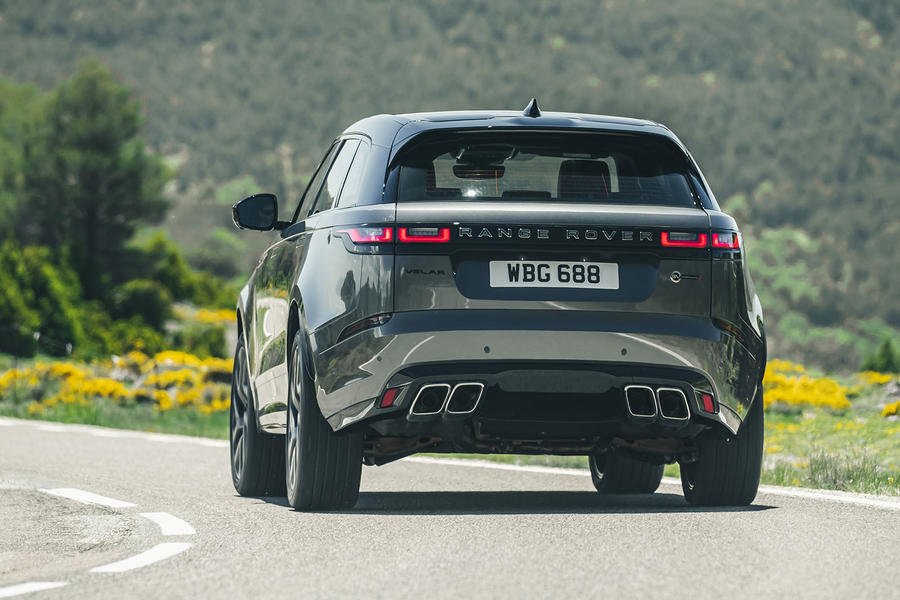 For all its sportier suspension settings, the Velar SVAD feels refined and luxurious on the road, rather than racy. Its grumbling exhaust is only heard when you decide to go for performance, at which point the engine produces a delicious note that’s prominent but never intrudes. When V8s are gone, that’s one thing we’re going to miss.

Thrust is available from the ground floor – what with the combination of generous low-end torque, eight gearbox ratios and easy, almost imperceptible gearchanges – but most of the time your impression is of generous, silent, effortless propulsion. The sort of thing many a car enthusiast would pay extra for.

The Velar is naturally a bit lower than other SUVs, so this one doesn’t have quite the ‘command’ driving position of some, but it’s superbly comfortable. In town, its steering wheel is small enough and its gearing quick enough to make manoeuvring pretty easy in tight going. On the open road, its GT credentials come into play: long legs, plenty of acceleration even at higher speeds, excellent stability and grip – with neutral handling – in sweeping bends taken fast.

It’s odd how such a thing should happen just as Aston Martin gets ready to launch its own SUV, but this Velar SVAD comes across quite well as a GT-style SUV from Aston, complete with the impression of quality.

What really smartens up your ideas about this car is a decent bout of off-roading, which Land Rover always insists its models can handle better than the rest of the SUV-builders, and which it always encourages those of us who test cars to experience. This time it was a 45-minute, rocky, sandy, dusty route around the sun-drenched Las Comes Land Rover Experience centre about an hour out of Barcelona, rich in steep, scrabbling climbs and descents that would be heart-stopping but for the fact that clever Land Rover engineers long ago invented hill descent control.

These are conditions to which owners would rarely subject their own cars, but their relevance to everyday ownership is that they show the suppleness of the Velar SVAD’s suspension. They show off the model’s ability to cope with rough and rocky going, even on sportier suspension settings, and in particular its robustness. Land Rover had vehicles that would be used repeatedly for this treatment over several weeks and, apart from having a care for their tyre health, their mechanics were entirely confident that they would emerge from the ordeal fit and relatively rattle-free. It was a bravura performance. 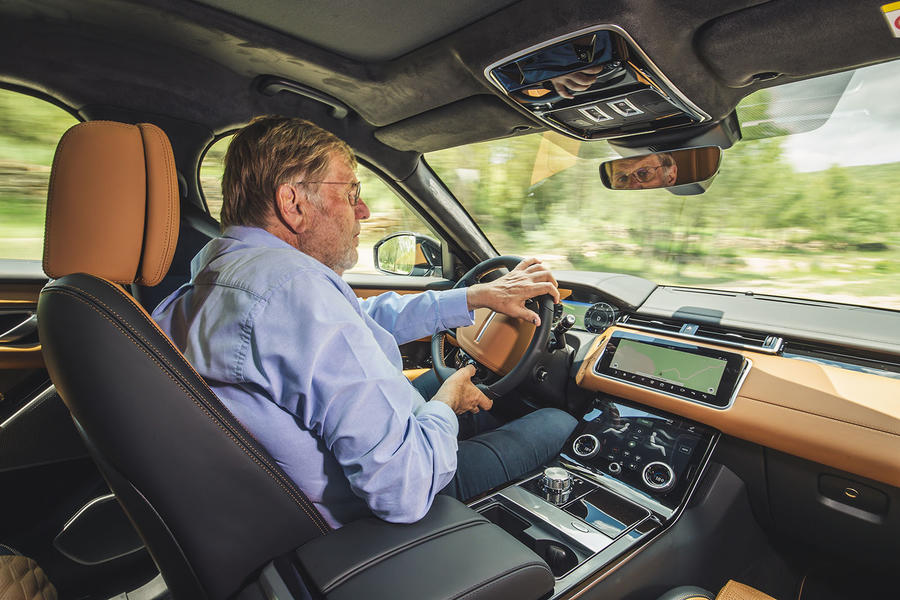 In the press blurb, there’s a quote from Land Rover’s design director, Gerry McGovern, about his team’s focus being on “creating vehicles our customers will love for life”.

The Velar SVAD, which can sprint on motorways and crawl up rocky Spanish hillsides with the same elan, is just that kind of machine. 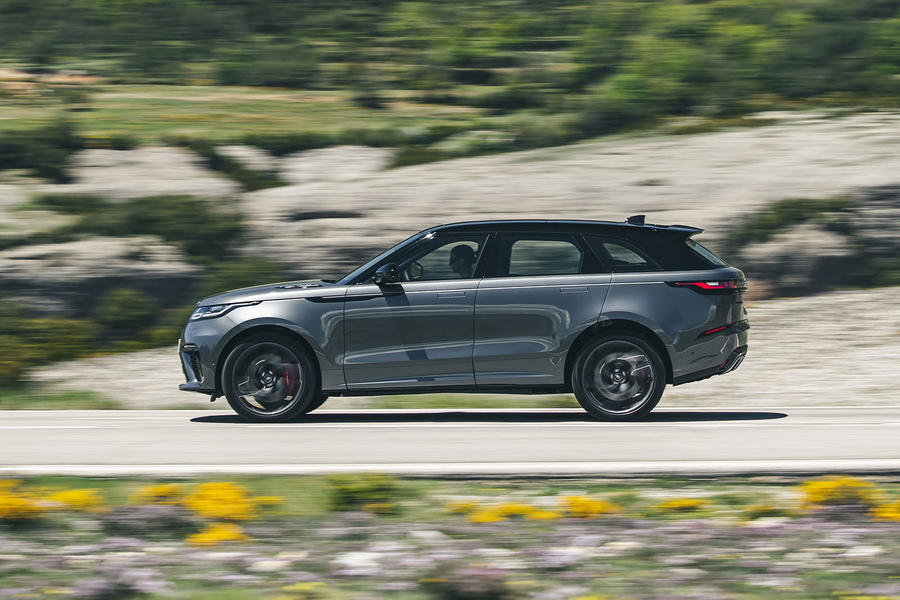 And I wasn't right about loosing style, still shots make it look so.

Steve Cropley is way too involved.

It is totally inappropriate to always have the same journalist review Land Rover products.