BACK TO ALL NEWS
Currently reading: Autocar's 10 most-read reviews of 2019
UP NEXT
2023 Lotus Type 133 to be firm's most luxurious model yet

2019 saw hundreds of new cars introduced and driven for the first time. But which were the ones that resonated most with Autocar's readers?

These are the ten reviews that proved the most popular over the past twelve months - and, while there are a few familiar faces, there are one or two surprises as well.

“Convertible supercars of the calibre of the 600LT Spider, so little afflicted by dynamic compromise compared with their fixed-roof relatives and so compelling to drive at their best, are truly rare.” 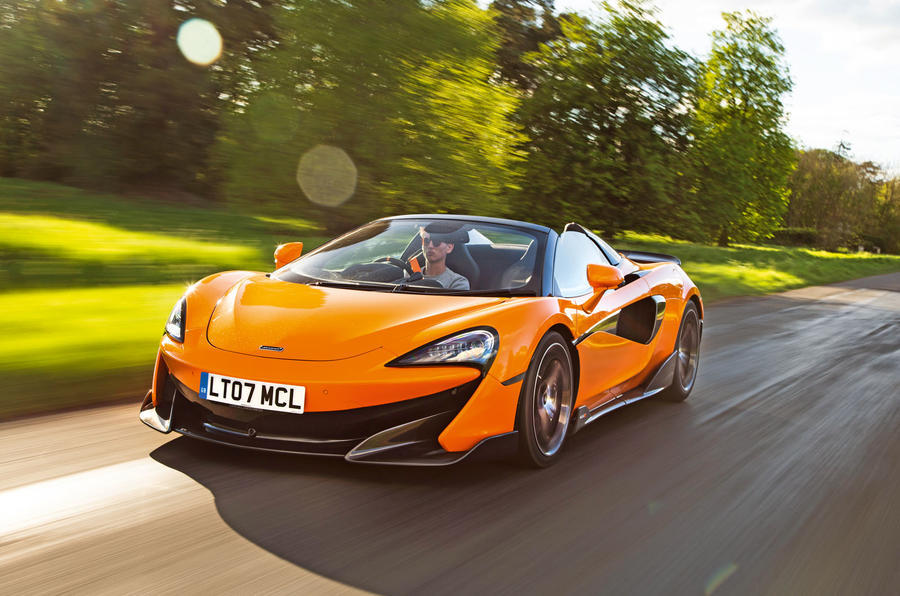 The 600LT is no stranger to praise on this site, having shown us a good time on a 48-hour blast back from Romania, before going on to defeat all comers in 2018’s Britain’s Best Driver’s Car contest. It’s not really a surprise, then, that the new Spider version nabbed itself a four-and-a-half-star verdict in its road test earlier this year. Removing the roof just adds another layer of enjoyment to driving the 600, and even its weighty convertible mechanism doesn't tarnish the poise and engagement offered by its taut chassis and Trofeo R tyre combination.

“The most encouraging sign we gleaned? That this isn’t just a credible new EV, but an interesting small car with plenty else besides zero emission to recommend it, and feels like an authentic VW to boot.” 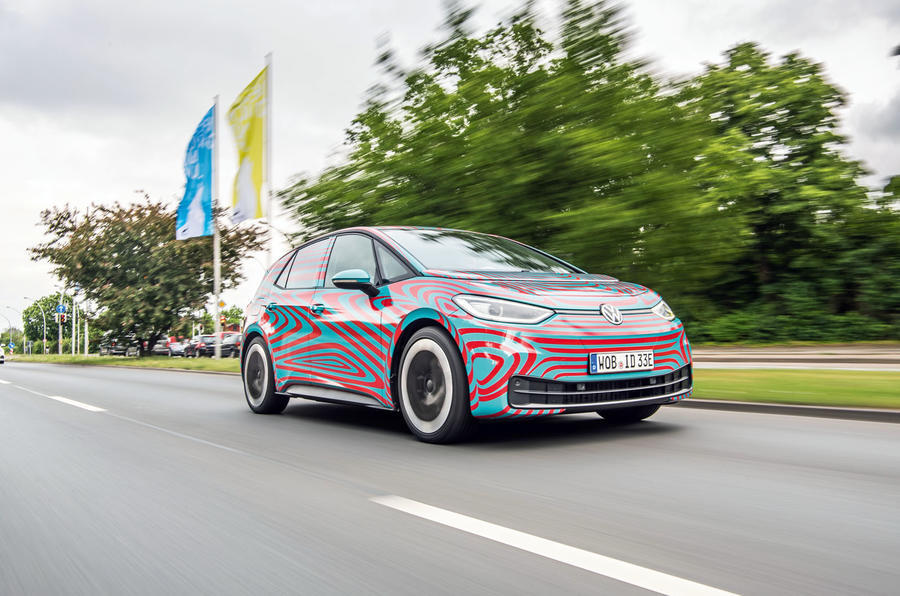 Ah, a rear-motored Volkswagen that's destined to reshape the automotive world with minimalistic styling, class-leading affordability and a deep-seated commitment to practicality. Sound familiar? Well, it should. Wolfsburg is no stranger to making motoring history, and the new ID 3 is tipped to attain the same dizzying heights as its Beetle and Golf forebears. A spin in a disguised prototype gave us an indication of just how easy the firm’s new flagship will be to pilot in urban environments, and suggested that the company’s claims of a 250mile-plus real-world range are far from just PR puff.

“It’s better to drive than a Panamera or Cayenne, or Model S or Jaguar I-Pace or Audi E-tron. I think the only times I’ve enjoyed an EV more are driving a Renault Twizy, the original Tesla Roadster, or a Nissan Leaf with plastic back tyres and that was all kinda different.” 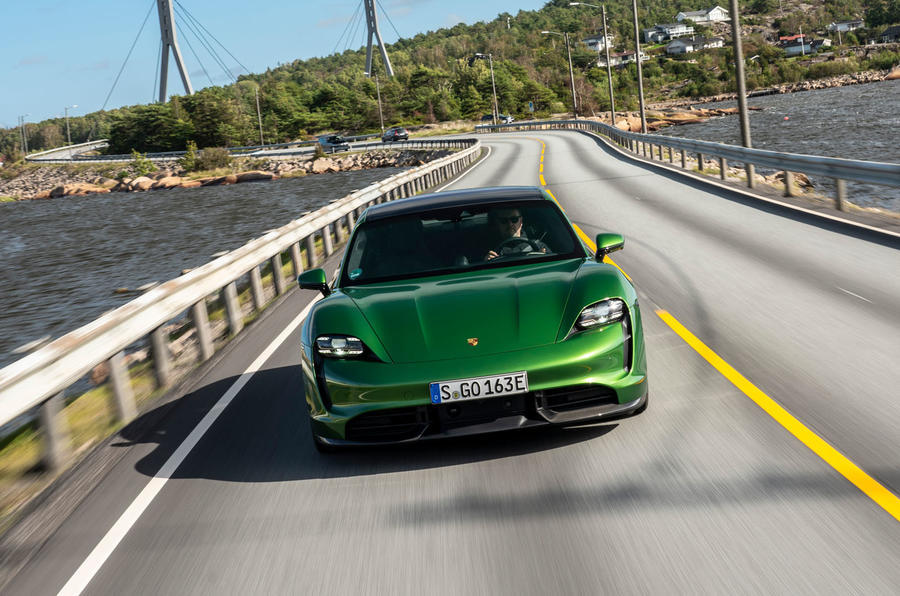 Early impressions of the Taycan were that a Porsche doesn’t stop being a Porsche when you throw away the flat-six (or V8, or V6, or even turbo flat-four…). Here’s an EV that competently disguises its 2.3-tonne kerbweight in corners, and is so mind-bendingly fast in a straight line that it leaves conventionally fuelled rivals for dust. It’s a sign that driving for fun needn’t become a phenomenon of the past, and that electrification could bring us sports cars with less compromise than we’ve ever seen before. 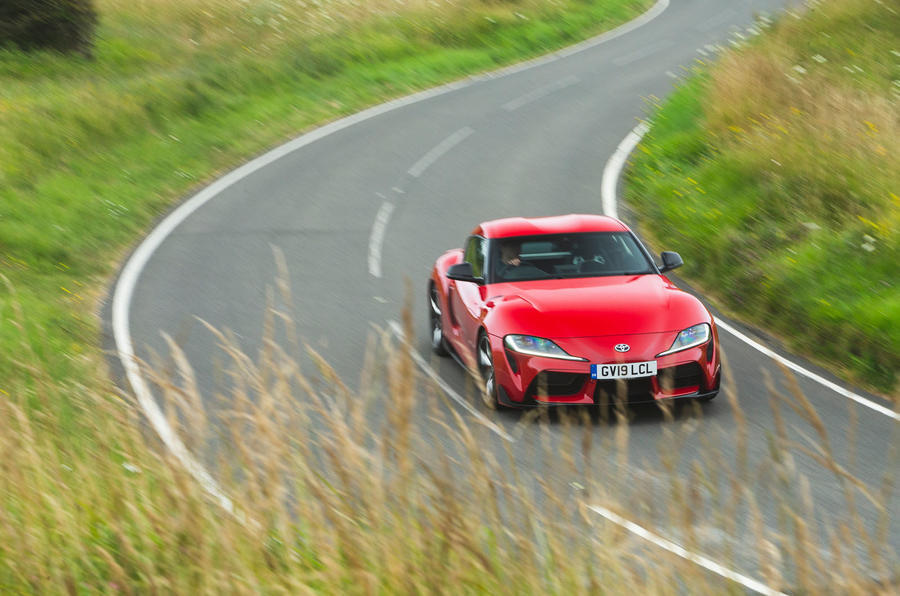 “Perhaps we’ll be treated, in years to come, to a Supra with a manual gearbox and an engine to truly rise above the mid-engined alternatives, with even sharper handling and with less compromise made for the benefit of touring comfort.”

No unveiling this year seemed to provoke as much debate among enthusiasts as Toyota’s new GR Supra. The BMW Z4-based coupé had a lot to live up to, and fans were concerned that an automatic gearbox and Munich-developed straight-six engine might not complement the lineage of its revered predecessors. Happily, though, the fifth iteration is far from a disappointment. A row-your-own gearbox option wouldn’t go amiss, and we can’t ignore the more flagrantly Germanic interior elements, but addictive straight-line performance and confident handling characteristics are proof that this is a Supra in more than just name.

“By all measures, this is a seriously affordable and impressively practical electric vehicle, with a powertrain that offers perfectly agreeable performance and drivability.” 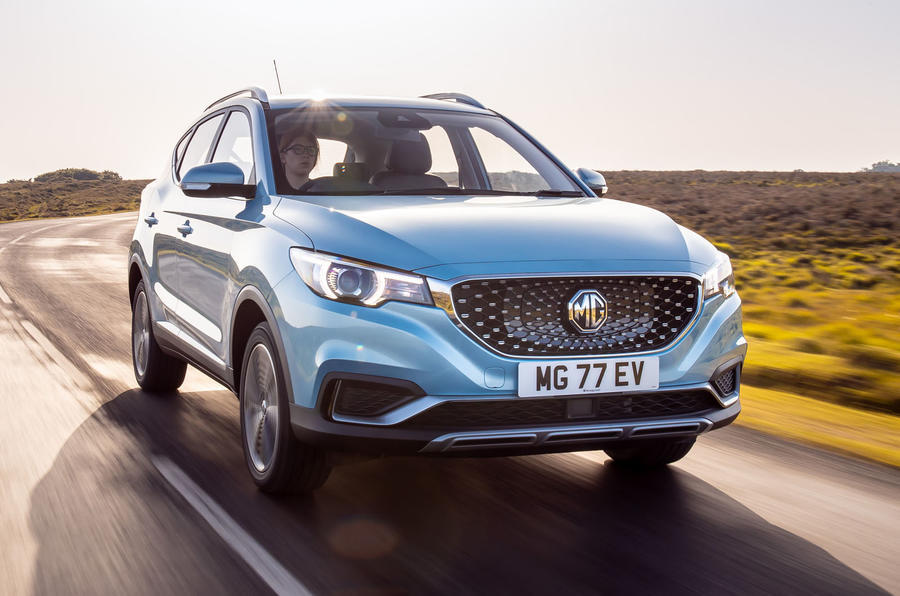 A budget-friendly compact SUV may seem a surprising inclusion in our ‘top reviews of 2020’ rundown, but there’s no denying the significance of the ZS EV. Not only is it the reborn MG’s first electric car, but it’s also one of the UK’s most affordable, the first examples to be driven out of UK dealerships cost a hair under £22,000 - significantly less than its Kia E-Niro and Nissan Leaf rivals. Our testers weren’t fans of the model’s sub-par handling or comparatively low real-world range, but the ZS EV certainly marks an early step in the democratisation of electric motoring.

“The attention to detail in its engineering gives the new Volkswagen an immediate feeling of deep-seated integrity from the very first mile.” 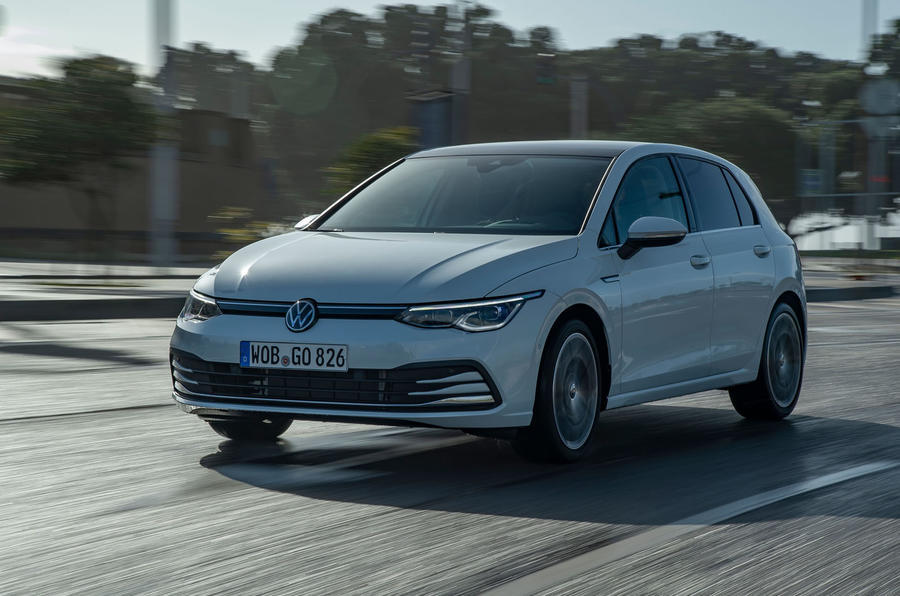 A good start from one of Volkswagen’s most important new models (even in spite of the arrival of the pivotal ID 3 electric hatch). Our first stint behind the wheel of the finished product highlighted a pleasingly practical interior layout, a decent amount of ‘oomph’ in the mid-range and nicely judged handling from the familiar MQB platform. It remains to be seen how the Golf will fare on harsher UK roads, and in different guises, but it’s sure to remain in contention for family hatch greatness in any case.

“The BMW 320d has been as consistent a contender for the title of ‘best car in the real world’ as the industry has made in decades – and the new G20 version has unquestionably raised its game.” 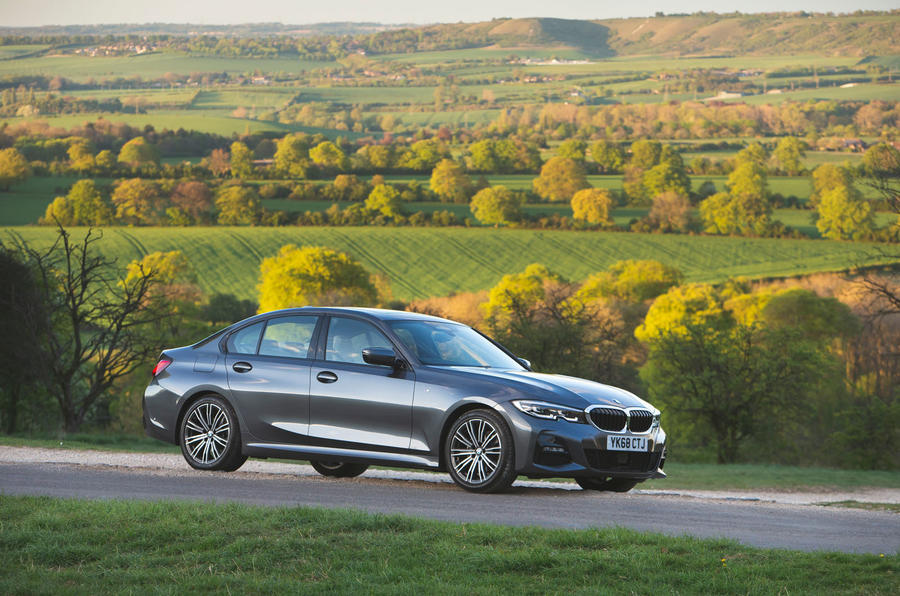 Recipient of one of just two five-star verdicts issued by our road test team in 2019, the new G20 BMW 3 Series scored high marks across the board for performance, frugality, refinement and dynamism. Testers brought to attention its real-world fuel consumption of roughly 60mpg, a frugality that belies the saloon’s ability to sprint to nearly 150mph as quickly as most bona fide sports cars. All that’s left to find out is how well the formula will translate to the 500bhp-plus 2020 M3...

“What makes [the Focus] an even more compelling prospect, is that it’s now better than ever at what has always been its raison d’être: the way it drives.” 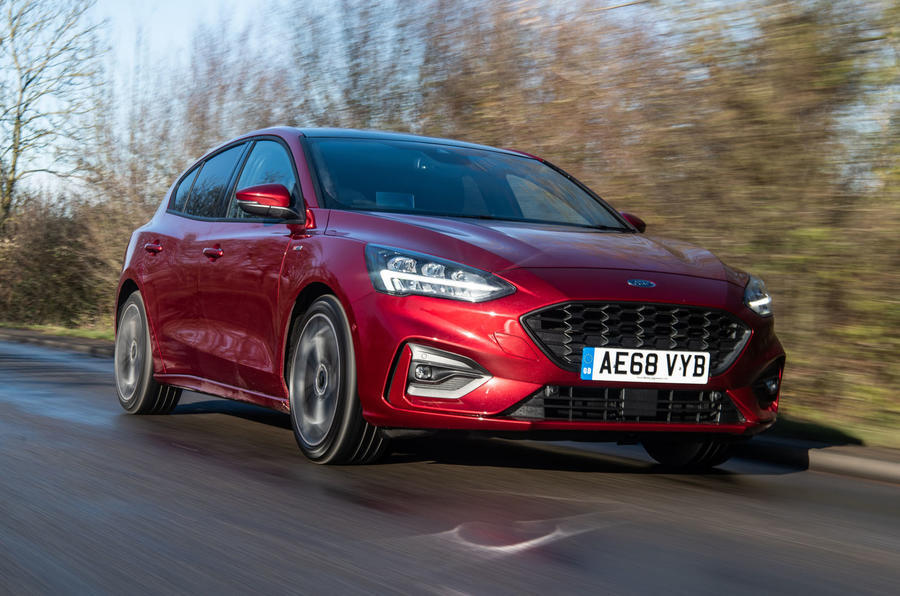 We like the fourth-generation Ford Focus; our road test concluded it was more practical, more attractive and more technologically advanced than any Focus to have gone before. When we subsequently brought the test car back for a stint on our long-term fleet, it continued to impress with engaging handling and unfaltering usability, establishing itself as a true contender for the all-conquering Golf.

“No rigid axles, eh? And no separate chassis? Lordy – there’ll be much muttering among the green welly crowd on that score. That’ll be why it feels so comfy, modern and dynamically sophisticated, then.” 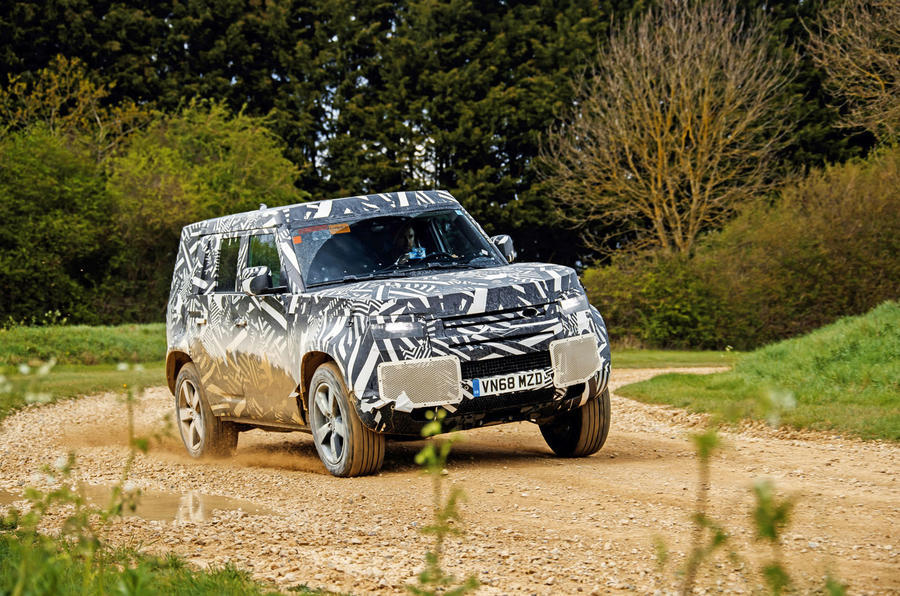 We couldn’t wait for the wraps to come off Land Rover’s reinvented Defender. In the lengthy run-up to the 4x4 icon’s rebirth, fans and critics alike were extremely vocal about what it needed to do, with doubts centred around whether it would be able to demonstrate the same rugged dependability as its forebear. Thankfully, our first ride at Land Rover’s Midlands-based off-road test track laid to rest any concerns that the blocky British icon would be incapable on the rough stuff, and made us excited about getting our hands on a production-ready version in early 2020.

“We suspect plenty will embrace this car just as it is – more than enough, at any rate, to fuel the continued growth of its maker, to spread the reach of electric cars by quite some way.” 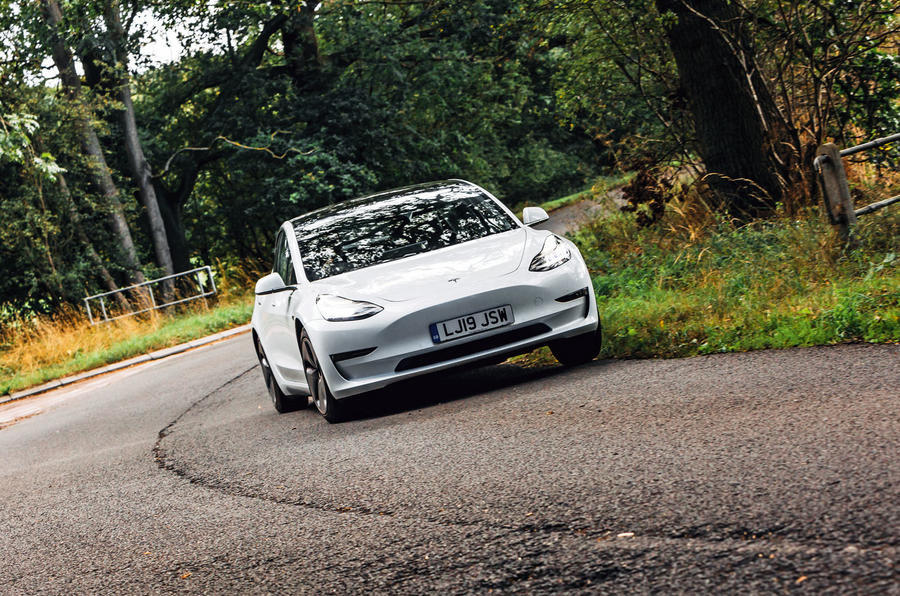 Tesla’s first ‘affordable’ model was unveiled to great fanfare back in 2016, but only made its way to this side of the pond in summer 2019. We put the Model 3 up against the formidable new BMW 3 Series initially - to see if it stood a chance of claiming the executive saloon top spot - before subjecting it to a full road test in mid-spec Standard Range Plus guise. A 254-mile range and sub-£40,000 price tag make it an attractive proposition for any driver looking to make the switch from internal combustion, and it impressed our testers with its addictive performance and genuine all-round usability.

The cars the Autocar team bought in 2019

Know where it's going