BACK TO ALL NEWS
Currently reading: Volkswagen Group confirms six all-new models for 2019
UP NEXT
Analysis: Why the decline in diesel sales has slowed in 2022

The Volkswagen Group has officially confirmed six new models, including the Porsche Cayenne Coupé, at its 2018 Annual Conference in Wolfsburg, Germany.

As well as the Cayenne Coupé, the all-new models include the Audi Audi Q3 Sportback and an unnamed B-segment SUV.

A replacement for the current Bentley Flying Spur, as previously reported by Autocar, is also due. The final two models, the Volkswagen Bora and Lavida, which are already sold in China, will have electric variants launched this year solely for the Chinese market.

The cars appeared briefly on screen during the company’s financial presentation. 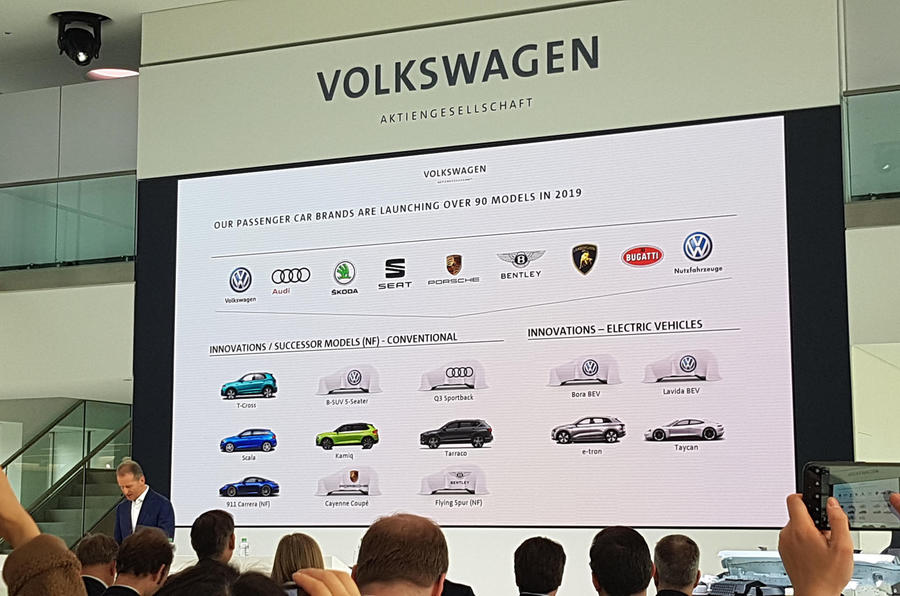 The Group also revealed that there will be a second wave of as many as 15 new MEB-underpinned electric cars as part of its aim to get to 22 million battery electric vehicle (BEV) sales by 2025. These are likely to arrive from 2022 and follow the first wave which includes a host of already announced EVs including the Porsche Taycan and Mission E Cross Turismo, the Audi E-tron GT, E-tron Sportback and Audi E-tron, the Volkswagen Buzz, Vizzion, Crozz and ID hatchback and the Skoda Vision E.

The company also showed predictions that by 2040, 70% of the European new car market will made up of BEV sales and about 10-20% plug-in electric vehicles, though these will be powered by fuels made from renewable electricity.

Porsche Cayenne Coupé to go on sale this autumn

More dull grey clones with black interiors, differentiated from each other with mouse clicks. Surely there can be something better out there?
Bazzer 12 March 2019

Well I have to hand it to

Well I have to hand it to them, they aren't holding back on investment.  Necessary?  I'm not so sure on that one.  You need a small hatchback, a small-to-mid SUV, a premier car/large SUV.  Umm, that's about it for necessity to make a decent crust.  the camper van, the beach buggy - all admirable, but there is such a thing as extending yourself too far.  I'm naturally reminded, given the '1st wave, 2nd wave'(!) of launching an attack on your enemy, only to find that food and munitions can't keep up with the attack.  That always ends in defeat.  I hope (actually I don't care) that VW haven't just signed their own suicide note.  Lessons need to be learnt from JLR (as JLR hasn't yet learnt them!).

That is a surprise. To be

Thats right, they should just

Thats right, they should just stick with the models they've got from now on. Theyve developed enough, just sit back and watch them sell. Don't worry about changing. Technology changes so slowly these days that they'll still seem new in ten years time.

yeh it is quite unbelievable but good at the same time