BACK TO ALL NEWS
Currently reading: Mercedes-AMG unveils most powerful four-pot engine ever
UP NEXT
Dacia bosses "fighting tooth and nail" to bring Spring EV to UK

Mercedes confirms 415bhp power output for hot A-Class, CLA and GLA, and we've got all the details of the new M139 unit
Open gallery
Close

The world’s most powerful 2.0-litre, four-cylinder series production engine has been revealed by Mercedes-AMG, set to feature in its upcoming ‘45’ model range.

Developing 415bhp in its most potent ‘S’ form, this completely new 2.0 turbo replaces the engine used in the previous A45 A-Class, CLA 45 and GLA 45.

Despite the potency of the outgoing A45 355/376bhp AMG four, engine development boss Ralf Illenberger says that emission requirements, the desire for more power, less weight and the different packaging requirements of Mercedes’ latest generation of compact cars necessitated a complete redesign. “The only carry-over parts are a few nuts and bolts,” he added. The new M139 engine produces 382bhp in standard form and 415bhp in ‘S’ guise, and 354lb ft or 369lb ft of torque.

New Mercedes-AMG A45: what we know so far about 415bhp super-hatch

Another major aim has been extracting a sportier driving experience from the engine by altering its torque delivery. While the previous, M133 four-cylinder engine’s torque curve resembled a diesel’s, rising steeply to level off across a wide chunk of the rev range, the new M139 2.0 produces more of a crescendo of thrust. 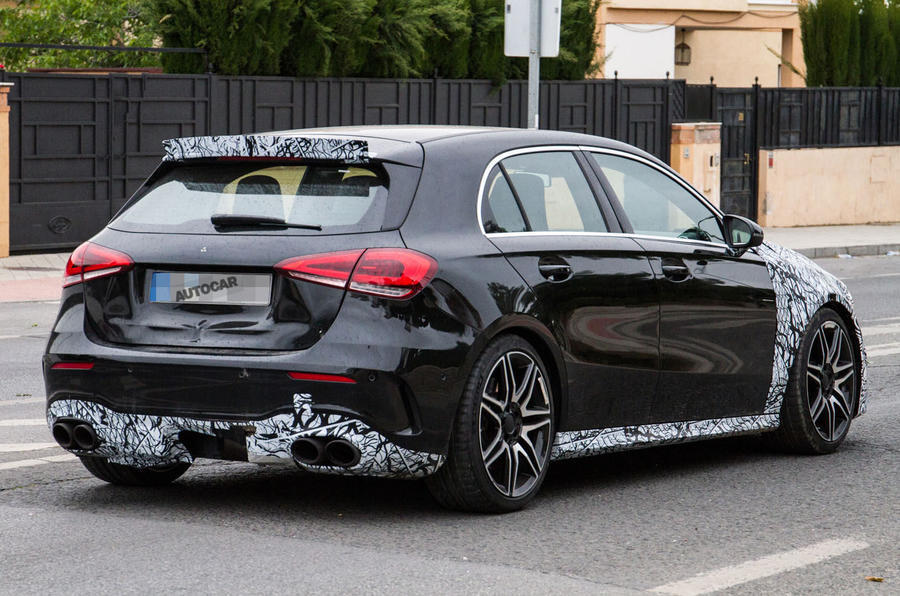 The aim is to produce the rising rush of acceleration characteristic of a revvy, normally aspirated engine. Rather than flat-lining, diesel-style, from around 2000rpm, AMG’s new engine generates peak torque at 5200rpm, while nevertheless producing more shove than the old one between 1000-2000rpm, the strongest surge developing from 3000rpm. Overall, said Illenberger, “it produces a more sporty delivery”.

More diesel-like are the 160 bar combustion pressures generated by the new unit, and a lighter yet more robust cylinder block developed to withstand them. It’s of the closed deck variety, creating a crankcase casting more like a part-closed box rather than a semi-open one, with deep, strengthening skirts around the cylinders. The new alloy block is as strong as a diesel engine’s, said Illenberger. The 16-valve cylinder head is also new, a key design challenge being the dispersal of the considerable heat generated. 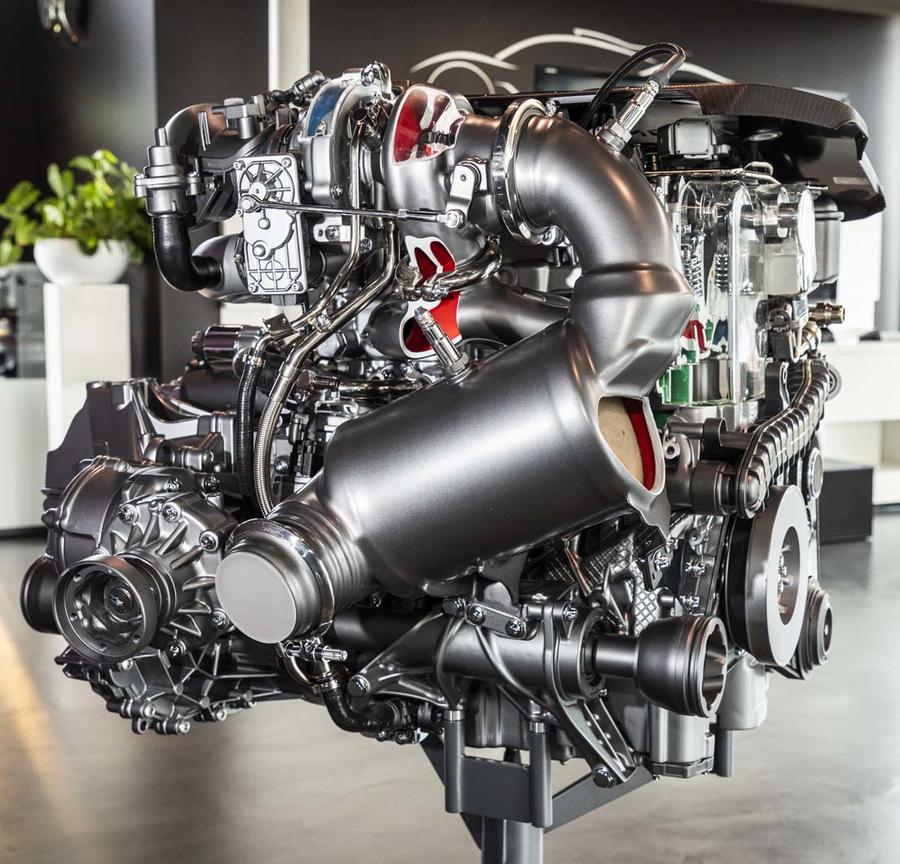 A single piezo-injector per cylinder would be at the upper limit of its fuel volume delivery, said Illenberger, so a second quartet of injectors sits within the inlet manifold tracts to boost delivery under hard acceleration. The Camtronic system enables two camshaft profiles to provide a blend of good fuel economy and heightened throttle response.

The vanes of a sizeable turbocharger run in low-friction roller bearings, an electric wastegate minimising the loss of boost when pressure modulation is required. The turbo now lives between the engine and the front bulkhead, the cylinder head having been turned through 180deg in order to fit the engine beneath the lower bonnet lines of the new models.

The turbo’s new location requires extra cooling, some of this provided by an engine cover shaped to direct fan-generated airflow over it. Illenberger said that the electric water pumps may also function after the engine has been switched off, to cool the block, head and turbo. The more potent ‘S’ version sometimes harnesses the air conditioner for cooling too.

Besides designing an all-new engine, AMG has also developed a more streamlined way to make it. Each engine is still built under the ‘one man, one engine’ approach long used by the company (there are several women hand-assembling these engines too, incidentally) – the methods of electronically recording the sequence of component assembly, and the torque applied to each of its fixings, by each power tool. The new methods save time and improve ergonomics. 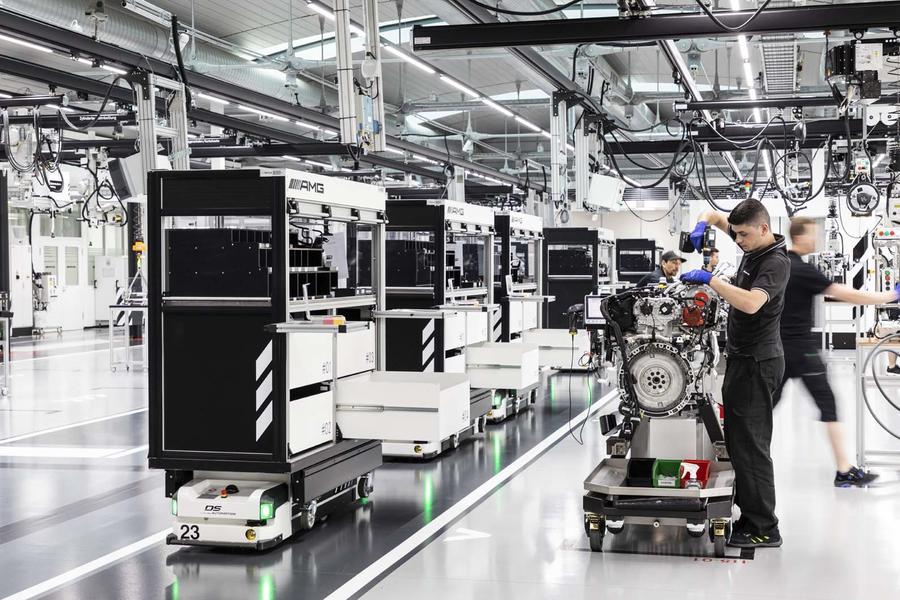 The new methods cut the production time by 20-25%, said plant manager Alexander Kurz, enabling AMG’s four-cylinder manufacturing facility to produce 140 engines per day over two shifts. The first car to feature this unit will be the A45 in July, the CLA 45 saloon appearing near-simultaneously, the GLA 45 a little later.

Shock news, Eupopean manufacturer makes a 2.0 4 cylinder engine and turns up the turbo.

It would be a far more news worthy, not to mention appealing, if it had more cylinders, a smoother delivery, and if it was to come attached only to a manual box in future.

I can see the appeal if you

I can see the appeal if you like this sort of thing, but for me it's just an excess that leads to frustration.  I would far rather spend £30K on a laid back, comfortable hack that would be barely slower point to point in the UK (if you want to keep your license) and £15K on something that is fun at any speed, eg an Elise.

Will be powerful, but it's still a noisy  engine whose main feature is it's cheap at it's heart and unrefined. It's seems sadly ironic that SAAB went bust and then the Germans took up the idea of turbo charging after "refusing it" for decades for some reason, Renault could also have stuck to their guns instead of giving 5GT turbo drivers a 16 valve Clio, that didn't appeal to me at least. Better late than never I suppose but it's not an engine type I would want to spend over £25,000 on.