The power output of Mercedes-AMG upcoming A45 appears to have been revealed accidentally by a German insurance website.

HUK24, an online insurance provider, has stored powertrain specs in a drop-down list for the new range-topping A-Class, examples of which were registered for road use in Germany in December.

UPDATE: The 415bhp Mercedes-AMG A45 S has been officially revealed - read the full story here

The details, although unconfirmed officially, reveal that there will be two different power outputs from the car's 2.0-litre turbocharged petrol engine. The 'base' model will produce 387PS (382bhp), while the flagship S variant makes 421PS (415bhp). Both will put their power down through all four-wheels, and are set to go on sale later this year.

The output of the standard model is already in excess of the 370bhp produced by the outgoing A45, with the top-spec car a full 45bhp more powerful. That should translate to 0-62mph of around four-seconds, and possibly less.

The video, which the German firm has called 'Not another Christmas video', showed an A45 in a bold multi-coloured disguise livery lapping a test track in Germany, and showed the car performing a series of powerslides.

While few official details of the range-topping A-Class have been revealed, Autocar has previously learned that it is set to have the highest specific output for a production engine in the world, eclipsing even the McLaren Senna's 789bhp V8.

AMG boss Tobias Moers told Autocar earlier this year that the A45 will get "well over 400bhp" from its new engine, which is expected to be an extensively re-engineered version of the current car's 2.0-litre unit.

That means it will have more than 200bhp per litre, ranking the car at least 12bhp-per-litre higher than the current A45 and beating the current specific output champion, the 197bhp-per-litre Senna.

The model, dubbed by AMG insiders as 'The Predator' as a nod to its extreme performance, is expected to serve a rival to Audi Sport's RS3 in the pairing's ongoing super-hatch fight, while also ensuring the A45 offers stronger straight-line performance than the forthcoming BMW M2 CSL. 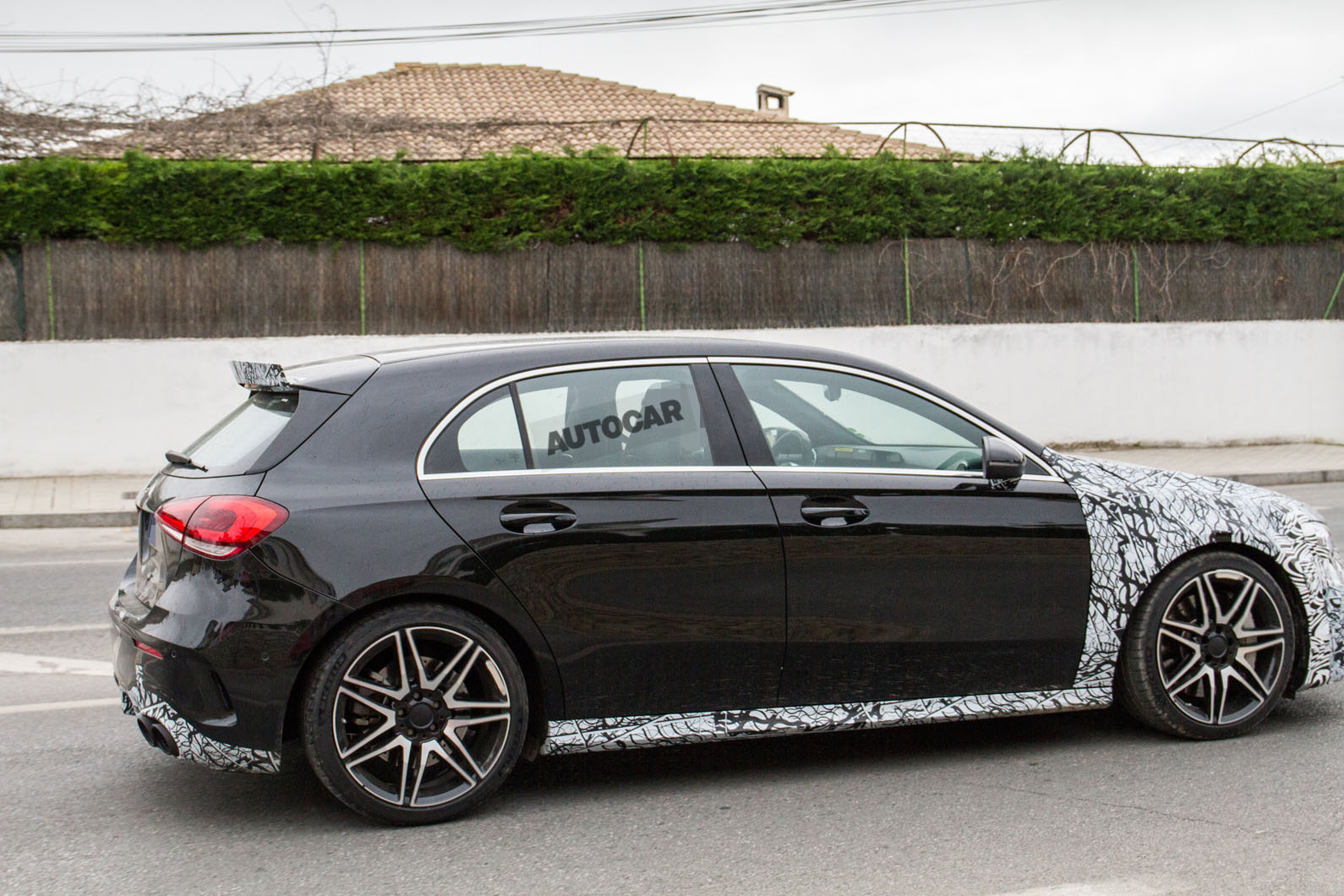 Despite rumours to the contrary, the model will be pure petrol and will not require a hybrid set-up to produce its headline-grabbing numbers. "It's going to be the next step in every perspective, including driving dynamics," said Moers.

The A45's big power advantage will be illustrated with only small aesthetic differences. It will have a quad oval-exit exhaust system, whereas the A35 will get a dual-exit system.

Also featured on the A45 is AMG' Panamericana front grille, giving the 2019 car a design nod to the recently revealed GT 4-door Coupé.

The A45 will have its own unique chassis developments with optional adjustable damping offering an extreme mode for high-speed circuit running. 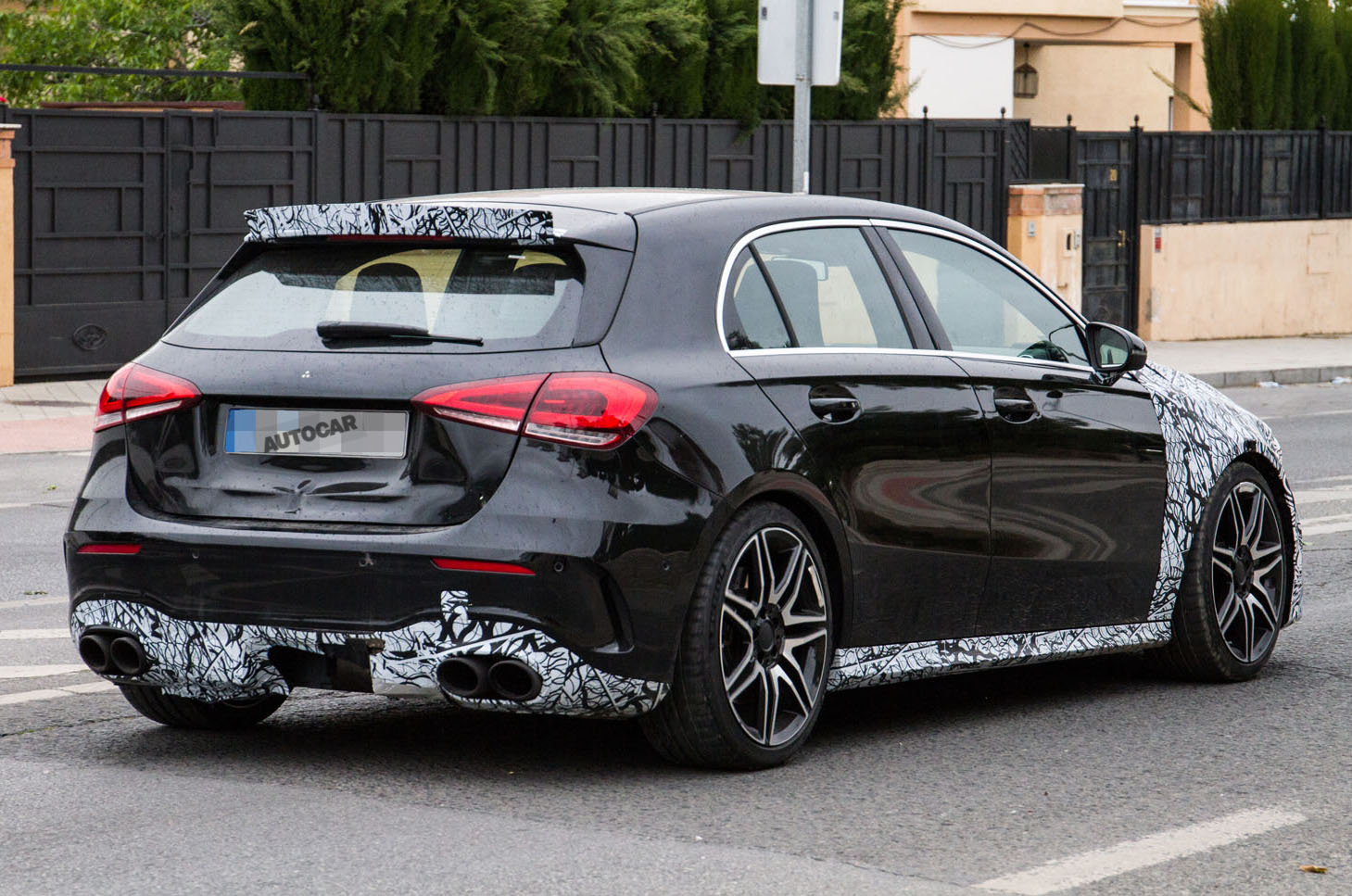 The current A45 is renowned for its stiff adjustable set-up, but the recently sighted test cars for the next-gen model look to be sitting lower, suggesting AMG could be targeting even more body composure for track-day driving in its future model.

The new A-Class is 10mm longer than today’s car and adopts a new floorpan and body structure that are claimed to provide significant increases in rigidity. This provides it with improved refinement.

The new A45 will also get a significantly wider front track and receive its own unique wheel carriers in a bid to reduce unsprung mass. It will roll on standard 18in wheels, but 19in rims will be an option.

The basis for the changes to the M133 engine unit comes from Mercedes’ new M260 four-cylinder engine. This is derived from the older M270 motor used by today’s A-Class but has a new crankcase and cylinder head.

Initially, the reworked M133 will feature a traditional exhaust gas-driven twin-scroll turbocharger. However, AMG is also developing a more advanced variant of its new engine that uses a 48V electrical system and runs both an electric-driven turbocharger and electric motor in a hybrid set-up that promises an even greater ramp-up in performance.

AMG is also looking to endow its new hatchback model with an extra 20lb ft — a move that, insiders have told Autocar, will provide it with at least 369lb ft and allow its 0-62mph sprint to crack the 4.0sec mark. The changes to the A45’s driveline extend to its gearbox and multi-plate-clutch four-wheel-drive system. Both have been extensively redesigned to handle the higher torque loadings of the new model.

In line with developments further down the new A-Class line-up, AMG’s new flagship hatchback model is set to adopt a new nine-speed dual-clutch transmission, together with a faster-reacting four-wheel-drive system that offers greater variability in the drive split between the front and rear wheels, plus a torque vectoring function for added on-the-limit handling delicacy.

The new A-Class, which is codenamed W177, will have the most comprehensive AMG range thanks to the introduction of the Golf R and Ford Focus RS-rivalling A35, which was revealed at Paris motor show. That car faces BMW's next 1 Series hot hatch, which is set to adopt all-wheel drive and be called the M130iX.

“We’ve identified a market for a milder AMG model positioned below the A45 4Matic,” AMG boss Tobias Moers told Autocar. “The strategy is going to be similar to that seen further up the line-up, where our various 43 models support the 63 models.”

The new A45 builds on the developments of the new fourth-generation A-Class. The model is the first of up to eight new compact cars, which include replacements for today’s B-Class, CLA and CLA Shooting Brake, as well as the GLA. There will also be an A-Class Saloon (and its own 400bhp A45 variant), a GLB and a possible new seven-seat version of the GLB.

Matt Saunder' comment: will power corrupt the AMG A45?

I’d change very little about the current Mercedes-AMG A45. The reports of even greater power and performance are to be expected: AMG needs the car to remain well clear of its cheaper hot hatchback opposition. I just hope the extra poke doesn’t come at the cost of the current car’s cleverly honed ride and handling compromise, which is very nicely judged for UK B-roads. A bit more Ford Focus RS-style balance and throttle-on handling adjustability out of that four-wheel-drive system isn’t a bad idea, mind.

Can’t wait for this to arrive

Can’t wait for this to arrive! Although not as soulful as the 2.5l from the RS3, it’s an affordable step into junior sports car territory — I think that these mega hatches are more comparable to this class than hot hatches nowadays with 400+ bhp and 4wd.

what I’m getting at is...should there be an aptitude test?, or an ability test? , to see if you should be allowed on Public Roads to drive a relatively ordinary looking (compared to a Supercar) four Seat, decent Boot Family Car with 400+ BHP?, thus the question I posed earlier.......

what I’m getting at is...should there be an aptitude test?, or an ability test? , to see if you should be allowed on Public Roads to drive a relatively ordinary looking (compared to a Supercar) four Seat, decent Boot Family Car with 400+ BHP?, thus the question I posed earlier.......

Wasn't that an argument that was had some 30 years ago with the Lotus Carlton.

Should there be a limit enforced by Law on how much BHP any Vehicle can have?

No. Just wait until we all go

No. Just wait until we all go electric and the performance that’s enjoyed by a Tesla model P100D in ludicrous mode is available on a Golf-sized car!

Should there be a limit enforced by Law on how much BHP any Vehicle can have?

I don't think so. Driving is pretty much the easiest thing you'll ever do, and only getting easier. Compared to riding a motorbike, rock climbing, downhill MTB, skate boarding, to name just a few things, it's a piece of cake. Admittedly I've never driven a really powerful car, but how hard can it be? Plenty of guys driving around with 700 - 1,000+ kW, minimal if any driver aids, and not crashing. If there HAD to be a regulated limit, it should probably be something outrageous like 2,500 kW.