BACK TO ALL NEWS
Currently reading: Bugatti's boss on Chiron variants, profitability and autonomous cars
UP NEXT
Toyota bZ4X deliveries still on hold after wheel detachment concerns

Bugatti's highlight of 2020 was the phenomenal 300mph+ Chiron speed run but now it's time for the next challenge, including the possibility of a second model in its line-up. We sit down with CEO Stephan Winkelmann and pick his brain on the future of the firm and wider industry.

You recently achieved broke the 300mph barrier in a Chiron Super Sport 300+. What’s next?

Being the spearhead of performance, it’s difficult to cover all types of performance with one car. The base Chiron is already an incredible car. If you want to create the best-performing car yet, you have to decide whether to go for longitudinal acceleration and top speed - this is what we’ve done with the 300+ - or you focus on downforce, handling and weight reduction and that’s lateral acceleration. But the two of them put together at this level of performance is impossible. So we did one and now we are working on something different - you guess what!

Should we expect more variants or special editions of the Chiron?

Derivatives are a must. The car gives us the opportunity to do so and if we didn’t, customers would not appreciate what you can get out of this car. Special editions? No, we did them at the beginning and now I think the team have enough to do to achieve what we promised. Divo deliveries will start this year.

How do you make more money at a firm like Bugatti?

We are constantly in dialogue with our suppliers, cutting costs, processes. Plus, we have to do things which get more out of a single car. We’re doing the [Chiron] Sport, the Super Sport, the Divo, the Centodieci, La Voiture Noire. This is helping. It is not an easy task because investment is really high for low volumes so you’re always at a high risk with everything you do. 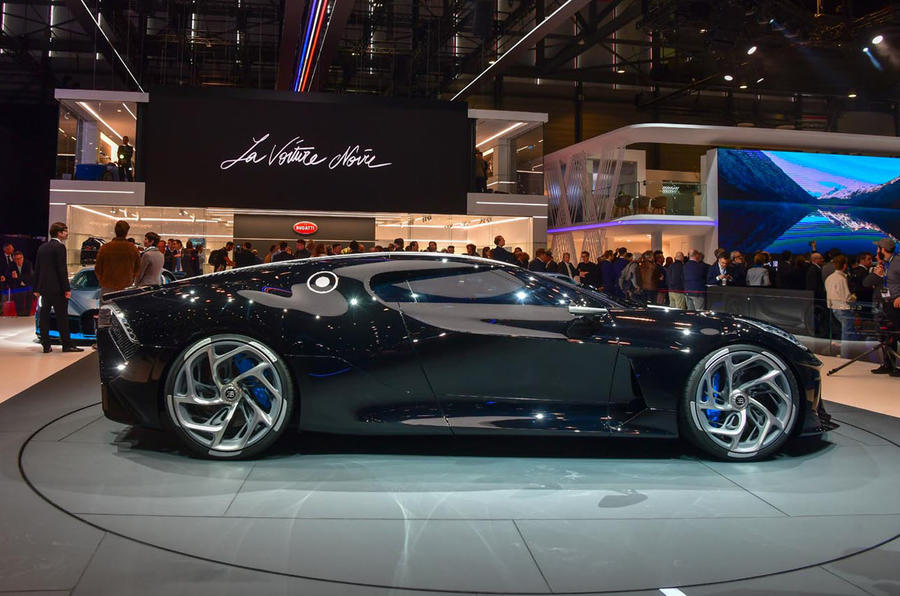 The industry is incredibly fast-paced right now, but does Bugatti operate in a separate bubble?

Our day-to-day struggles are completely different to a premium car brand. But the challenges of the future are touching us, such as digitalisation or electrification, if we look into a wider model range. It would be a given for a hypothetical second model.

What are your thoughts on self-driving cars?

I don’t see it as touching Bugatti for now. I always try to be honest and say we don’t have to be the first but when we do something, we have to be the best. I’m for assisted driving because it makes life easier and less boring. No-one is buying a Bugatti because it’s an autonomous car.

What are the most important elements of digitalisation for you?

For Chiron, it’s the basics, it’s about driving. It can’t be a mobile office. For me, it’s the weather forecast and the real-traffic situation. It has to be something that helps a driver get to a destination in the best and safest way possible.

What are you driving at the moment?

I have a Panamera Sport Turismo. I drive Bugatti models frequently to see the latest things, but other than that, I change my car once a year. I worked a lot for Audi, so I like an RS.

The successor to the Veyron, the first modern Bugatti, the Chiron debuted at the 2016 Geneva motor show with an 8.0-litre, quad-turbocharged W16 engine capable of 0-60mph in 2.4 seconds and an electrically limited top speed of 261mph. Prices started at €2.4 million, and production was limited to 500 cars.

A track-focused Chiron Sport followed in 2018, which saw extensive use of carbon fibre to reduce weight by 18kg, stiffer suspension and a torque vectoring system for improved handling in tight corners.It carried a $400,000 premium over the standard Chiron

The limited edition 110 Ans Bugatti arrived in 2019 to celebrate the marque’s 110th anniversary. Based on the Chiron Sport, it used carbon fibre bodywork and had the colours of the French flag placed prominently on the underside of the rear wing. Production was restricted to just 20 cars.

The Chiron Super Sport 300+ is currently the ultimate Chiron, built to mark the company’s record-setting 300mph top speed record run. It as a more powerful W16 engine, tuned to 1578 horsepower, along with substantial modifications including new front and rear bumpers optimised for high speed aerodynamics, a revised gearbox with longer ratios and raw carbon fibre body panels. Deliveries won’t begin until mid-2021, with only 30 cars scheduled to be built. 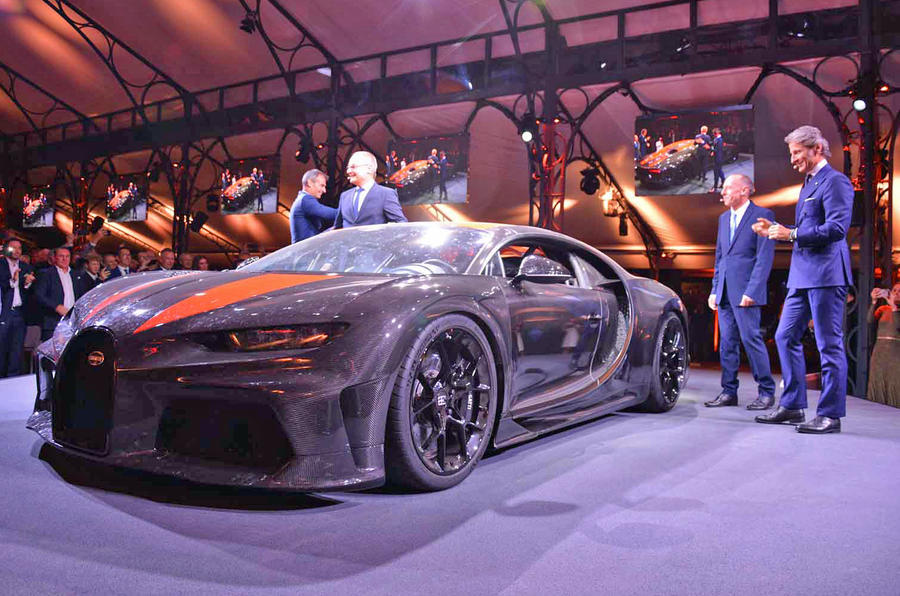 A one-off tribute to Type 57 SC Atlantic, La Voiture Noire is based on the Chiron but features a hand-built body made from carbon fibre. It uses the same 8.0-litre engine as the Chiron, but with revisions to the all-wheel drive system and dual-clutch gearbox to allow for more relaxed driving. The unique car was sold for £12.5 million, making it the most expensive new car ever sold. 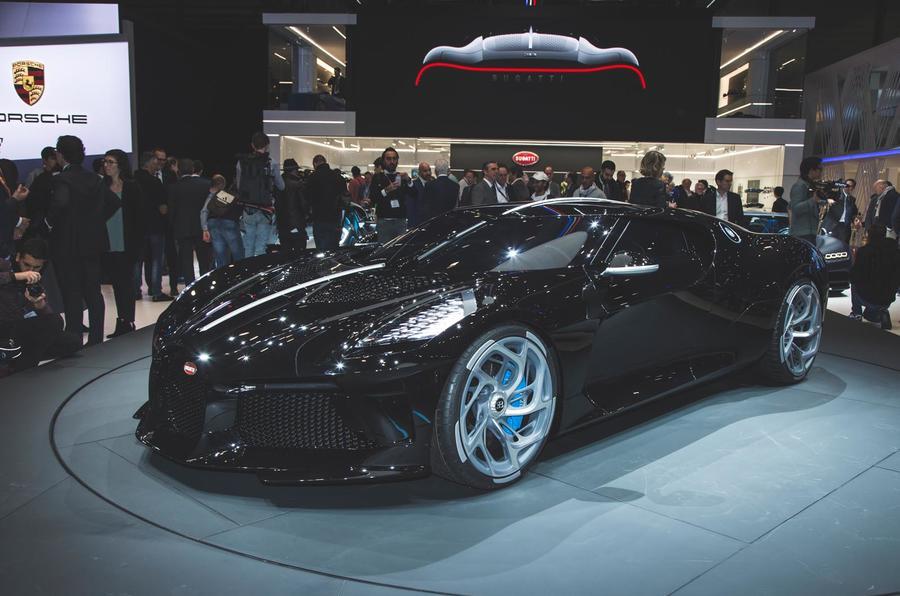 Created as a tribute to the EB110, the Centodieci is 20kg lighter than a Chiron and shares its engine with the Chiron Super Sport 300+. Just ten cars will be produced in total, with each one costing €8 million. 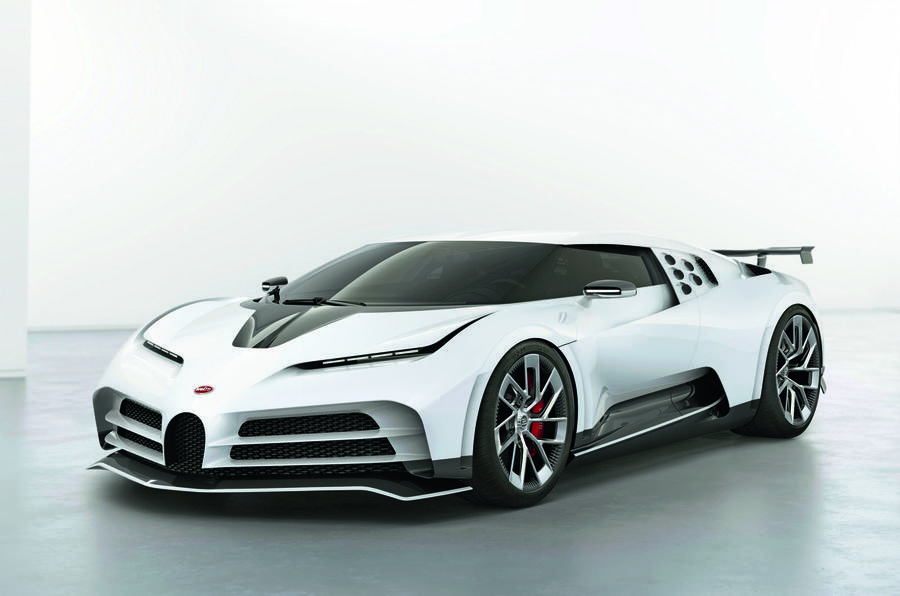 The track-focused follow-up to the Chiron, the Divo promises to be 8 seconds faster around the Nardo test track, despite having the same power output. Top speed is reduced, but aerodynamic improvements mean it generates 90kg more downforce, using a fixed rear wing rather than the retractable wing seen on the Chiron.

Production will be limited to 40 cars, with a starting price of €5 million - or roughly twice that of the Chiron. All 40 were pre-sold to Chiron owners ahead of the car’s public debut at the 2018 Pebble Beach Concours d’Elegance. 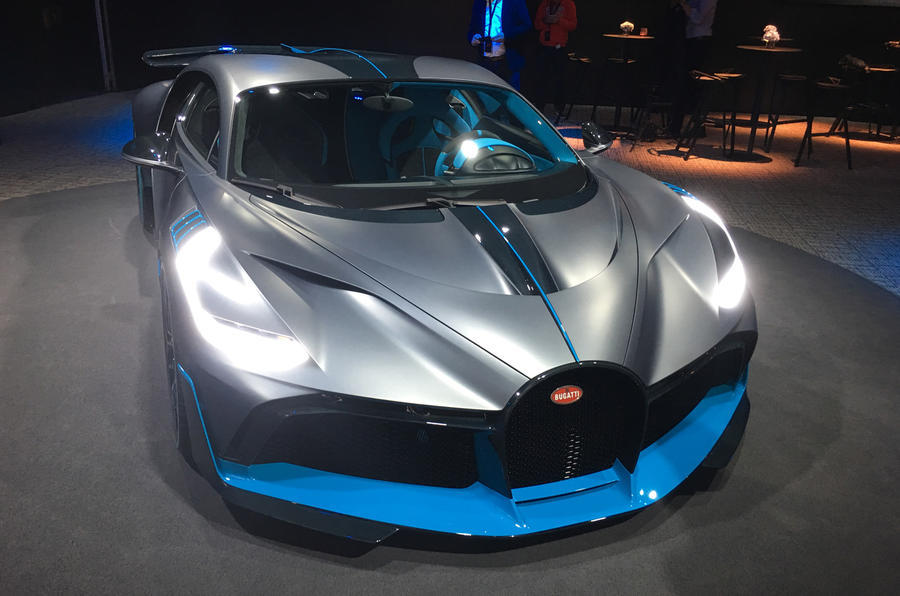 Think about it for a minute....

...when VW first introduced the W16, they bragged that it weight, had the same fuel economy and could fit in the same space as a V12. The Rolls Royce Phantom and Cullinan both have V12's, so can you imagine a full size Bugatti sedan and/or SUV with a detuned Veyron or Chiron W16 with between 700-800 hp. With that much power, they wouldn't need much of the special tech that the Chiron requires, lowering the cost. If they could spread the cost of this vehicle with a Bentley and then keep the Bugatti exclusive by only selling 1000-to-2000 of them over a 3-5 year period.

It's all most comical...

...that the makers a vehicle with a "base price" of $2.5 million dollars US, would ask their supplier(s) to lower their prices, because their too expensive. I know, all automakers do it and the technology that the Veyron and Chiron require is expensive beyond measure. Yet this candid acknowledgement makes at least two things very apparent, IMHO. First, Lotus and a few other high end upstarts have shown concepts of vehicles of that they intend to put into production, with simular prices and horse power, but are EV's, the theoretical technology of the future of all passenger vehicles! While upstarts may come and go, with their new financial backing, the brand that may have the greatest likely hood of success putting their concept on the road is Lotus! Looking at how much this the uber Lotus will cost and how close it is to the Chiron's base price, even though each of their 'powertrains' are radically different, it seems from this vantage point that the technologies involved cost about the same! But it seems that Bugatti is shackled to technology that some argue will be a thing of the past, and Lotus may be christening go-fast technology of the future. Which leads very easily to second thing that seems very apparent, Bugatti's need for an addtional model line(s)! As was the case with Porshe, Lamborghini, Bentley, Lexus, and Rolls Royals, they need something that will bring in constant, continuous revenue, so that they can keep building the Chiron's and their successors! Whether it is a sedan, SUV, CUV or Crossover or even linking their finances with another brand in the VW Group, like Audi and Lamborghini (maybe Bentley? Could that be the reason why Bentley is not replacing the Mulsanne and letting the Flying Spur be the brands new flagship? This way resources that would have went to developing its replacement, will now go toward a second vehicle at Bugatti?), so that the may share development cost on future vehicles. Bugatti builds beautiful and exciting vehicles, and I for one can't wait to see what they do next!

Ok, yes, when performance figures come into it, the Koenigsigg is right there,but, I’m talking about the styling, the attention to detail inside and out, when the first Veyron came out some of the parts had amazing prices, hows , at the time, four grand for the indicator stalks behind the Wheel, they were milled from an Aluminium billet, or how about twenty grand just for Tyres, yes the two cars mentioned do astounding things, but, I think the Veyron looked expensive, it’s just an opinion, and I’m prepared to read others and give an unbiased if I want to.