BACK TO ALL NEWS
Currently reading: Throwback Thursday: 1964 Bond Equipe GT first drive
UP NEXT
How Lewis Hamilton became an F1 record-breaker

The defunct Bond car company is not one of the best known — most recall it, if at all, for its bizarre, wedge-shaped Bug of 1970.

Bond started in 1949, with the introduction of the Minicar, a three-wheeler with a two-stroke engine. It was designed by Lawrie Bond, an engineer from Preston, and was built in the Lancashire town by a commercial company called Sharp's.

After a fairly successful run (production totalled 24,482 cars), Sharp's decided to focus its efforts in the automotive field, renaming itself Bond Cars and launching its first (and, as it turned out, only) proper (see four-wheeled) car in 1963.

This was the Equipe GT, a two-door sports coupé the length of, and significantly lower and narrower than, today's Ford Fiesta.

It was produced with assistance from Triumph, using the chassis of the Herald and the gearbox, brakes and 63bhp 1.1-litre engine of the Spitfire. The suspension (also Triumph) was independent all-around, with a rear swing axle, while the body was constructed from fibreglass, a still relatively new material.

It was pitched, according to Autocar, at "motorists who otherwise would like to own a sports car but are deterred by the need to accommodate a young family" and those "who want more than two seats in a car of essentially sporting character". The price for the coupé was £822, which is equivalent to around £15,800 today; the sportiest thing you can get at that price now is probably a Seat Ibiza.

Although through its more practical layout the Equipe weighed 50kg more than the Spitfire, its performance was still good, with a 0-60mph time of 17.6sec compared with the Spitfire's 17.3sec. 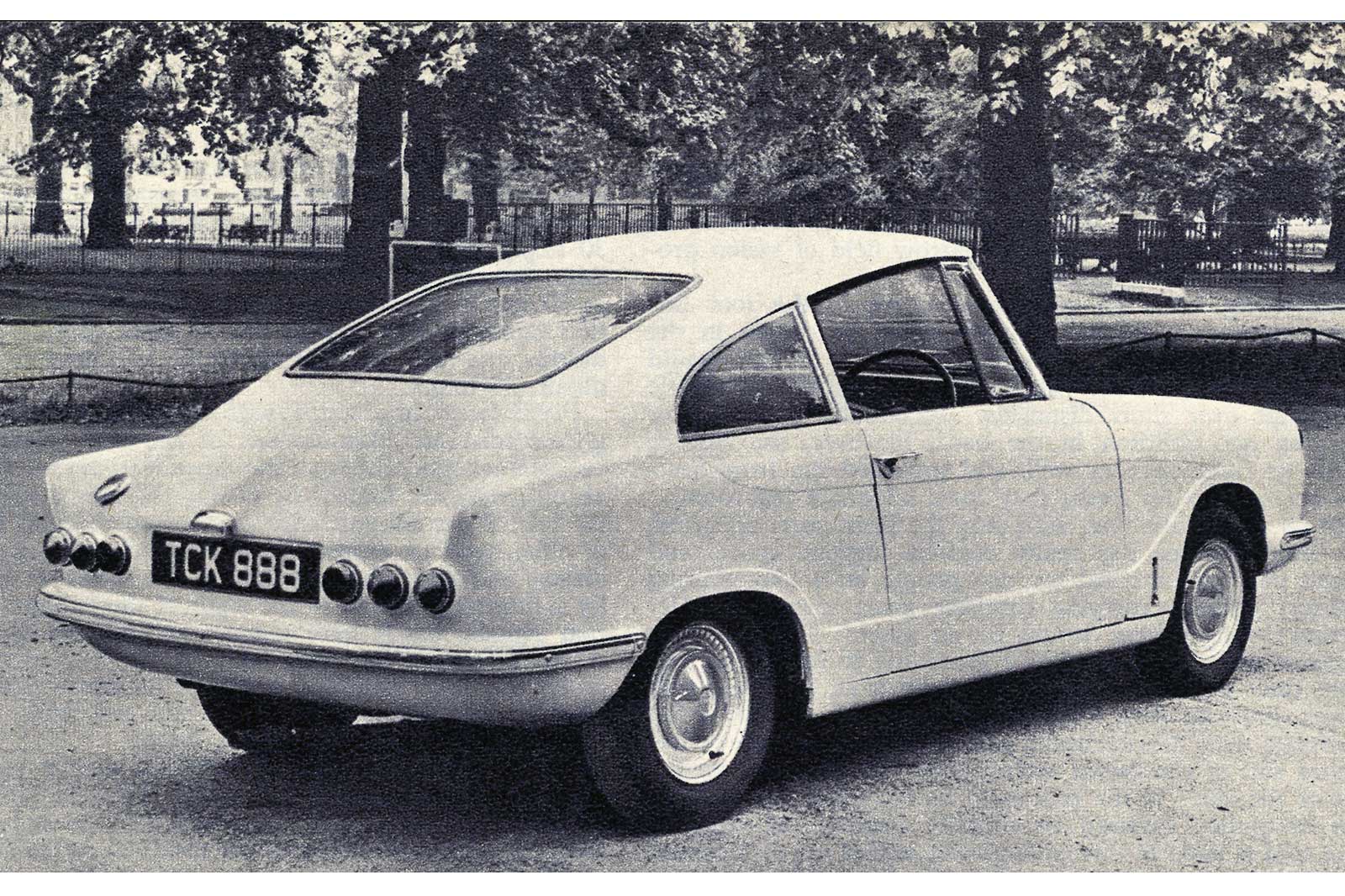 "An immediate impression is of the eagerness and smoothness of the little four-cylinder engine," we said. "It revs freely and quietly right up to 6000rpm without vibration.

"A crisp exhaust note accentuates the impression that this is a very willing power unit. Sufficient power is available for a restart on a 1-in-3 incline, provided controlled clutch slip is used to keep the revs up. The drive takes up smoothly and clutch pedal pressure is reasonably light."

We found the four manual gears to be smooth and easy to change, with the lack of synchromesh in first being of "decidedly practical value" and third "the perfect ratio for storming hills and for main road overtaking".

The ride was judged to be "excellent on reasonably well-surfaced roads", although "potholes in the road caused pronounced thumps, sounding as though the suspension had bottomed".

We continued: "On pavé, there's severe bottoming and violent vertical movement as though the wheels are unable to keep pace with the irregularities, and on the rarer washboard type of surface there is a lot of scuttle vibration.

"An associated criticism of the Equipe on bad roads is the amount of wheel shock coming back through the steering. This is excessive. The excuse for this trait is the really precise rack and pinion steering allied to lightness of control and the remarkable turning circle."

As for the handling: "There is mild understeer at first, which lessens and gives way to oversteer when the limit speed for a given corner is approached. The rear wheels still slide outwards rather abruptly. 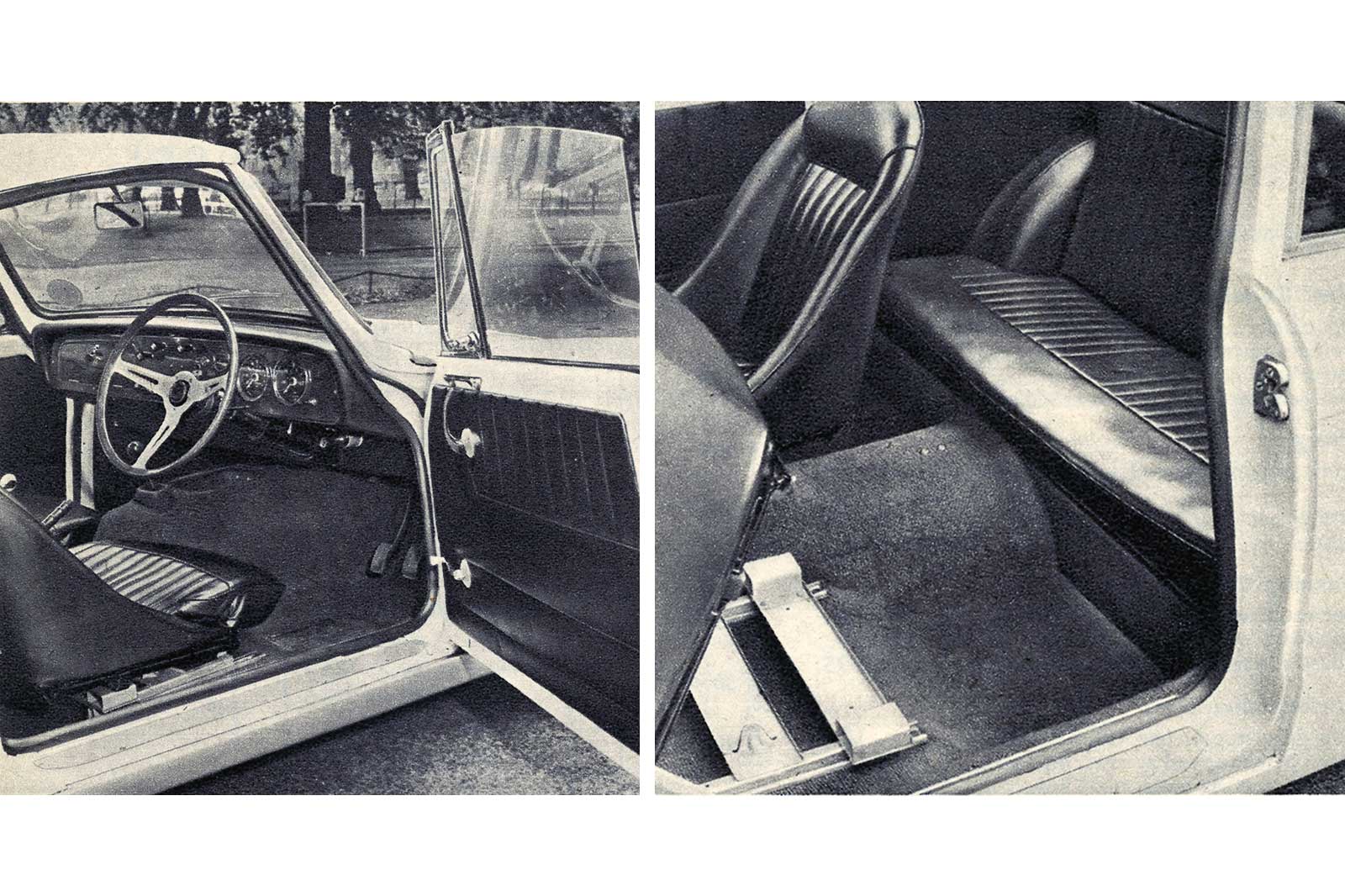 "Steering correction quickly retrieves the situation, and as the car has a marked tendency to nose into a corner on the overrun, instead of running wide, the Equipe should help its driver out of trouble if he takes a bend too fast. On wet roads, the tendency for the tail to slide is accentuated. No matter how hard the Equipe is thrown about on a winding road, there's hardly any roll, and only violent braking brings any protest from the tyres.

"Disc brakes are fitted at the front, drums at the rear and, although there is no servo, response to quite light pedal pressure is good. The driver seldom has any qualms about stopping quickly."

There were some considerable and worrying flaws with our early-production test car. First, we noticed that "the metal doors and Herald scuttle did not perfectly align with the remainder of the bodywork". Then we realised that the steering wheel design blocked the driver's view of the instruments, although this wasn't as bad as the fact that one of its screws worked loose on a rough road. Before long, one of the quarterlights also lost its nut during our test drive, rendering it unopenable. And, worst of all, "a low-pressure area along the sides of the car causes the frameless windows to bow out, leaving a substantial gap from the rubber seal".

Thankfully, things were a little better inside, with "the apparent comfort and finish being most pleasing".

We said: "Thick weave carpets cover the floor front and rear, and the seats and side trim are in shiny black PVC. 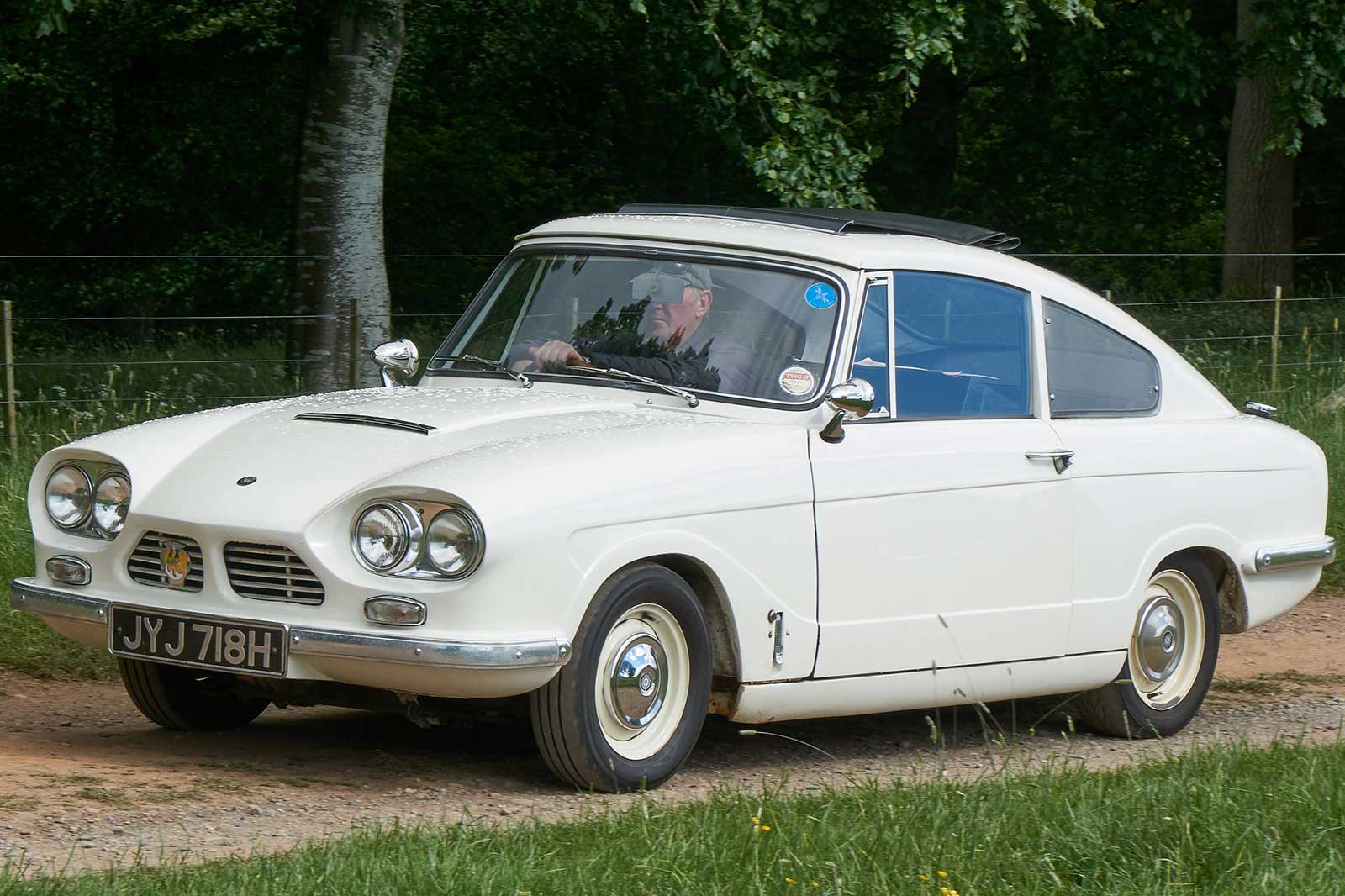 "The seats themselves are of Bond's own design and are especially comfortable. Based on a metal framework, they are deeply padded and give really firm lateral support to hold the occupants in place on corners."

However, like in any 2+2 coupé, head room wasn't great in the rear, with the bench being suitable really only for children. Leg room was adequate, however. If you were to drive two up, with the rear seats folded forward, there was "really copious luggage space".

The Equipe was facelifted later in 1964, gaining the Citroën Ami-like quad headlight appearance. A 2.0-litre coupé model arrived in 1967, based on the Triumph Vitesse, followed by a convertible. Production came to its conclusion in 1970, after 4389 examples had been built.

The Bond marque was discontinued after the Bug died in 1974, having been bought by Reliant, and thus moving to the West Midlands, in 1969.

Even in it's time it must have been an ugly, poorly built dog of a car.

....actually they were quite well thought of in the day!

The other remarkable thing, in the first model at least, is that there's no boot lid. You have to put luggage in through the doors. If that isn't a recipe for back problems, I don't know what is!

I remember seeing these about

I remember seeing these about a fair bit as a kid. I always assumed they were made up from a kit after the orginal Triumphs body rusted away (which didnt take long back then).

I remember we used to go to

I remember we used to go to the local pub for our lunch every day (remember those days) just for a half and a sandwich, and the local bank crew used to do the same.

One of the managers used to come in who owned a owned a Bond Equipe and was desparate to sell it and offered the car with a loan thrown in!

A badly built hand-made body on a flawed production chassis. It was surprising that anyone considered investing their hard earned money in to one of these vehicles.  A certainty for a poor return of your investement Bond!

The Bond Equipe was available from Triumph dealers and the "H" reg model shown was registered in Dundee. However, it must have been a slow seller because by 1970 it had the 2 litre Vitesse engine and a more modern grille, so the car featured must have been in stock for a long time at Rossleigh, the Bond dealers. By the time the Bond Bug was on sale, I think they'd given up the dealership.

25 November 2018
I owned the pictured car in the early 2000's TCK 888 it was a 1961 registered car that was a prototype for the 1963 launch.
Wish I'd kept it now though.
I got it from an elderly man who owned it for a long time.
It was off the road for years before I got it. But he used to start and move it a bit on his drive. I put four tyres on it and adjusted the brakes and it passed the mot. Funny little car with a loose rear screen which I believe started falling out on the autocar road test back in 62

25 November 2018
I owned the pictured car in the early 2000's TCK 888 it was a 1961 registered car that was a prototype for the 1963 launch.
Wish I'd kept it now though.
I got it from an elderly man who owned it for a long time.
It was off the road for years before I got it. But he used to start and move it a bit on his drive. I put four tyres on it and adjusted the brakes and it passed the mot. Funny little car with a loose rear screen which I believe started falling out on the autocar road test back in 62