BACK TO ALL NEWS
Currently reading: The fastest electric cars
UP NEXT
2024 Evoque, Discovery Sport to lead new-era Land Rover EV line-up

Gone are the days when buying an EV meant pottering around in a Nissan Leaf. Now, EVs are proper speed machines, as these 12 cars show
Share
Open gallery
Close

It wasn’t long ago that the acceleration of an EV was anything but electrifying. Heavy lead-acid batteries and weedy motors made the performance more milk float than muscle car. Yet advances in technology mean that, these days, going as quickly as possible demands battery power and EVs now have the upper hand over internal combustion.

Here, we look at 12 of the fastest-accelerating electric models, as claimed by the maker, from stuff that you can drive out of the showroom today, through to those that are due to arrive in the coming months and years. 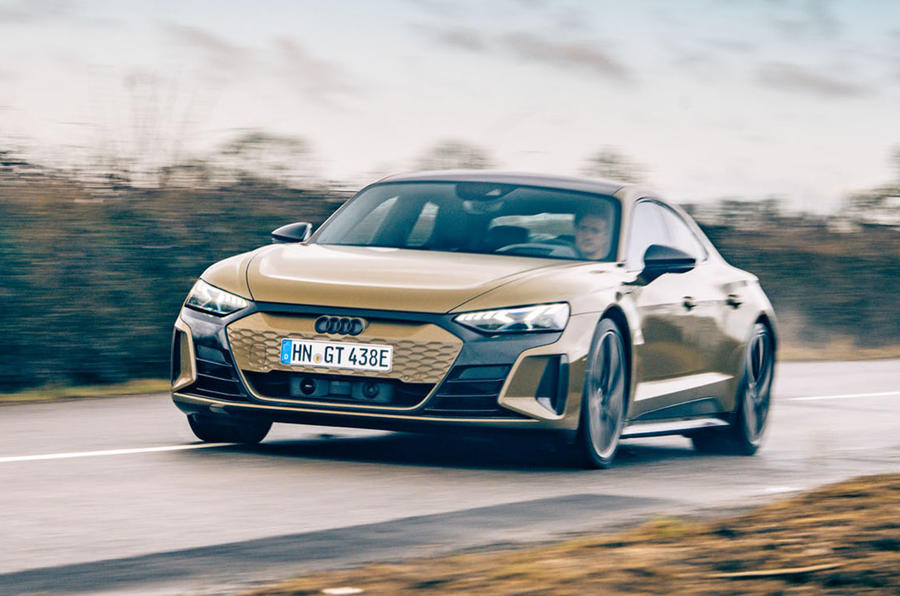 Very closely related to the Porsche Taycan, Audi’s most powerful version of it’s e-tron GT is also similarly quick. Using the same twin motor system and trick two-speed transmission, the RS can deploy an overboost 637bhp (power is normally 590bhp) to deliver a shatteringly fast 3.1 seconds 0-60mph time. That’s not quite as fast as the Porsche (it’s also limited to 155mph all out), but it’s enough for this restful and refined four-seater to dust most internal combustion-engined supercars. A feat that’s all the more incredible when you realise it weighs a hefty 2347kg. 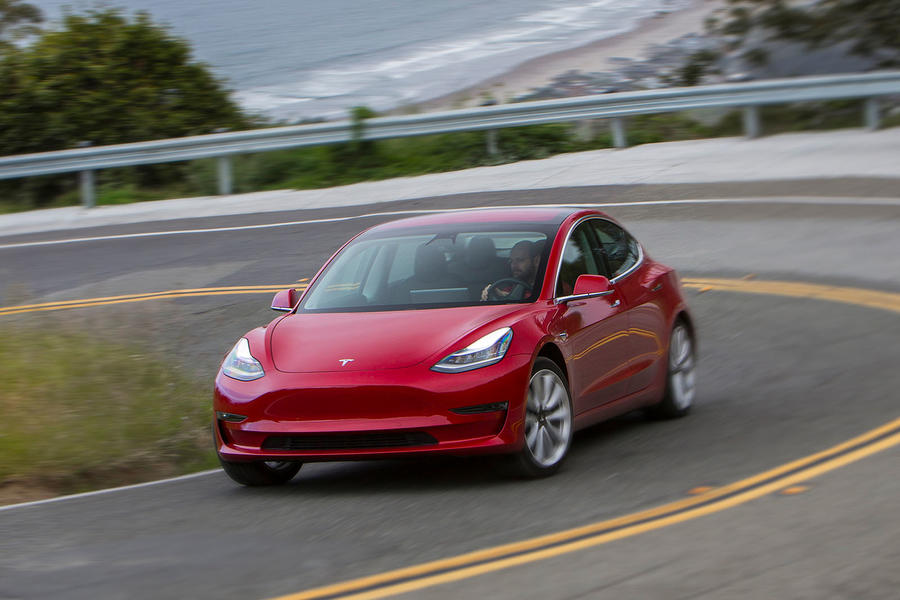 Given its status as the leading pure-EV manufacturer, it’s perhaps no surprise to find a Tesla or four in this list. What’s most remarkable about the Model 3 is that it’s the firm’s bread and butter model, a BMW 3 Series rival that, in the context of the others here, is affordable and usable. In flagship four-wheel-drive 449bhp guise, it’ll sprint to 60mph in 3.1sec. Incredibly, future over-the-air updates could allow owners to click a button for even more pace. 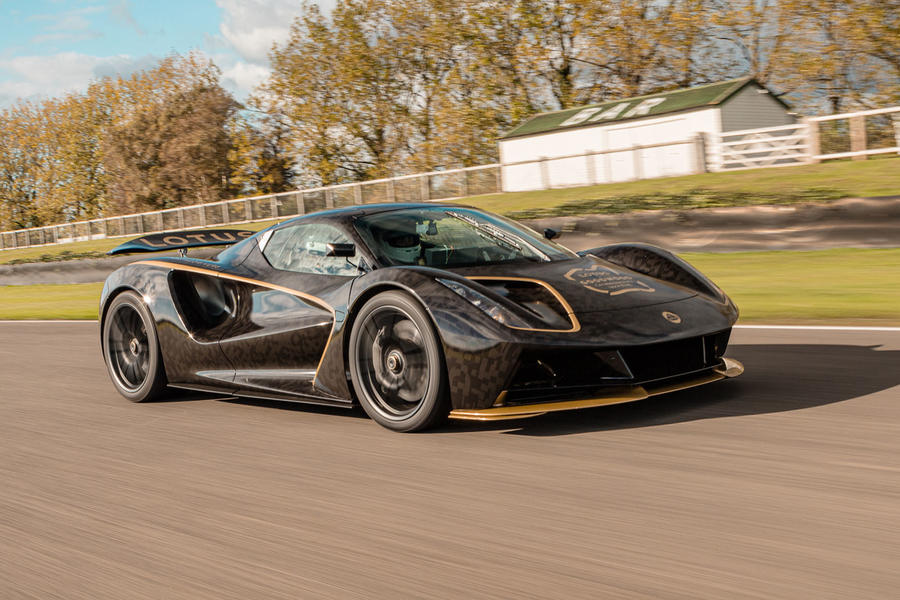 When Lotus finally reveals the official performance figures for its 1923bhp hypercar, it’s likely it’ll move some way up this list. Until then, we’ll have to make do with the Norfolk firm’s no doubt pessimistic claim of "less than three seconds" for the 0-60mph test and a top speed of "over 200mph". Whatever the reality, the Evija will likely be one of the most exciting to drive thanks to a class-leading target kerb weight of 1700kg and carefully developed driver modes designed to maximise the huge performance potential. 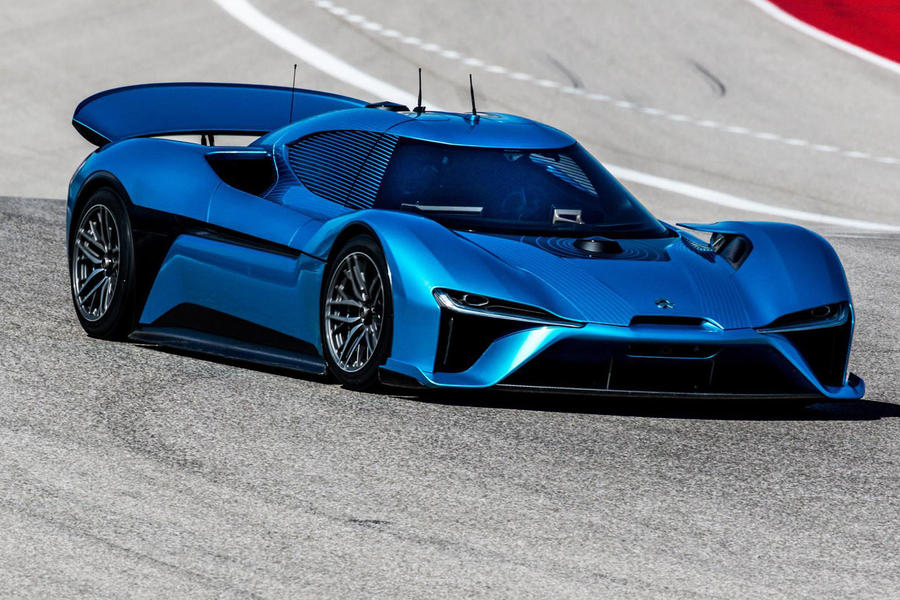 You could argue that the Nio shouldn’t be in this list, what with EP standing for Experimental Prototype. Yet the Chinese-backed company has built and sold 16 examples of the 1341bhp four-wheel-drive machine, plus it holds the Nürburgring lap record for a production car (6min 45.9sec, should you ask). In fact, track performance is where the Nio excels, and having been built to FIA LMP1 specifications, it's effectively a thinly disguised racer, hence its ‘disappointing’ 0-60mph time of 2.7sec. 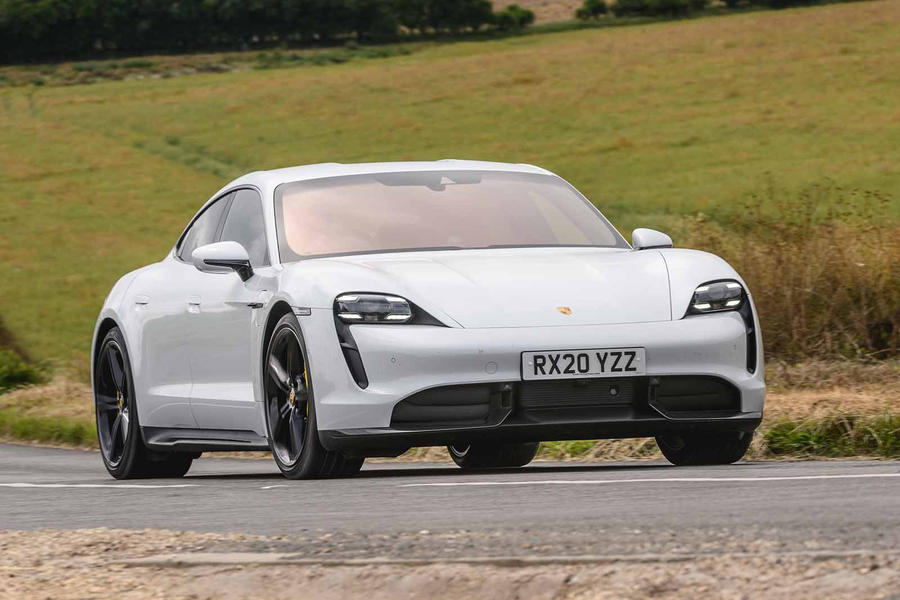 It’s really not possible to overstate the importance of the Taycan, which is one of the few cars on this list designed and built by an established car manufacturer. While most here come with wild prices and in limited numbers, the Porsche is a series-production model that’s as usable as the firm’s internal-combustion models. The Turbo S’s ability to whisk you from standstill to 60mph in 2.6sec is staggering and top speed is limited to 162mph. More impressive is the engaging handling and the depth of engineering that makes this feel as much like a Porsche as a 911 does. 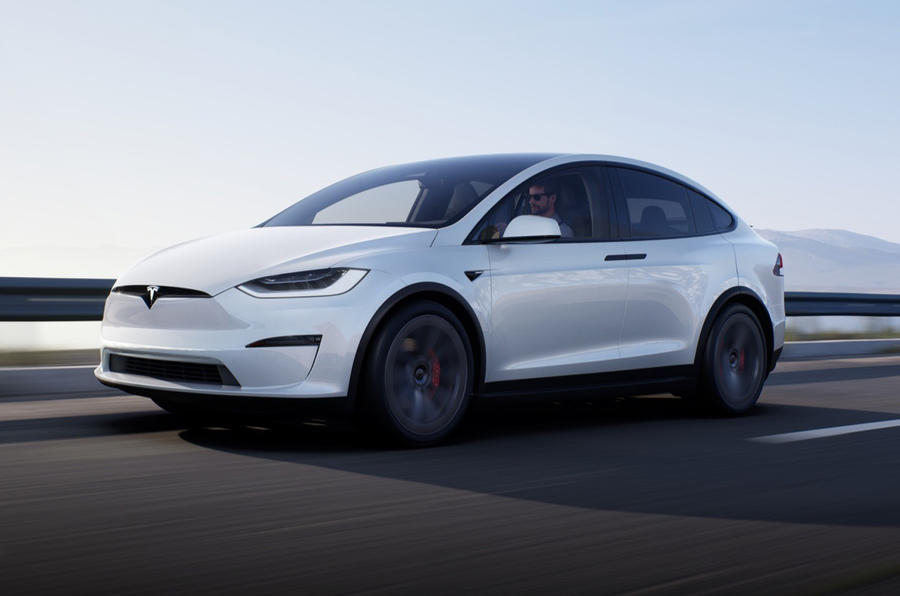 It seems just a little, ahem, ludicrous that the high-riding, seven-seat Tesla Model X can smash through to 60mph in less time than it takes the Taycan. Just think about that for a second: a leather-lined, 2.5-tonne SUV that can accelerate faster than most supercars, regardless of their means of propulsion. Key to the gull winged Tesla’s startling turn of speed is the new 1006bhp tri-motor set-up it shares with the Model S Plaid, which allows this four-wheel drive seven-seater romp from standstill to 60mph in a startling 2.5 seconds. 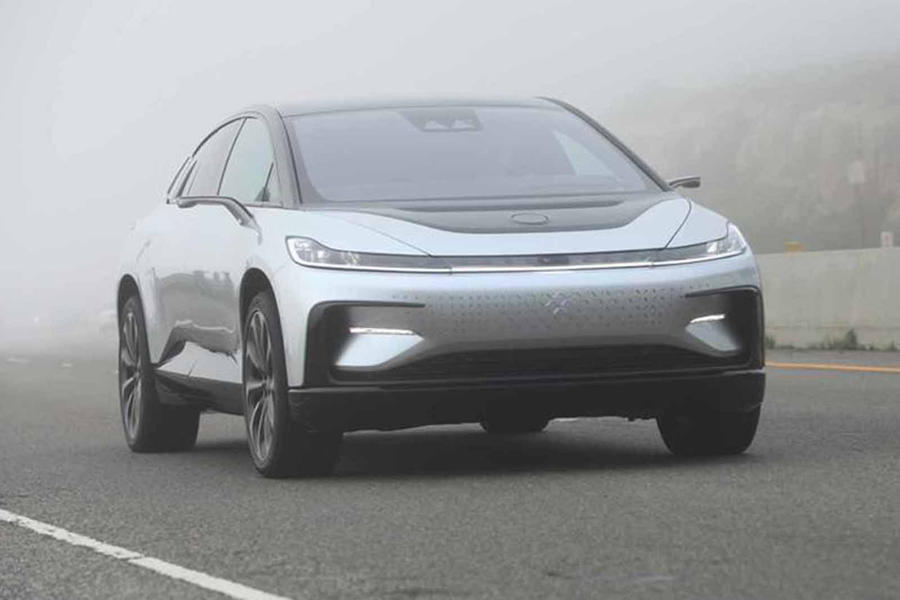 Chinese start-up Faraday claims to be taking a different approach to car making, one that mirrors tech giants such as Apple. It sees its large FF91 saloon as a platform to sell digital services, and no doubt access data, as much as a car. Even so, it's certainly a quick online platform, its trio of motors developing 1035bhp and the 0-60mph dash is reckoned to be all over in just 2.2sec. There are currently no plans to bring it to Europe, but in the US, it’ll cost from £90,000 when production starts later this year. 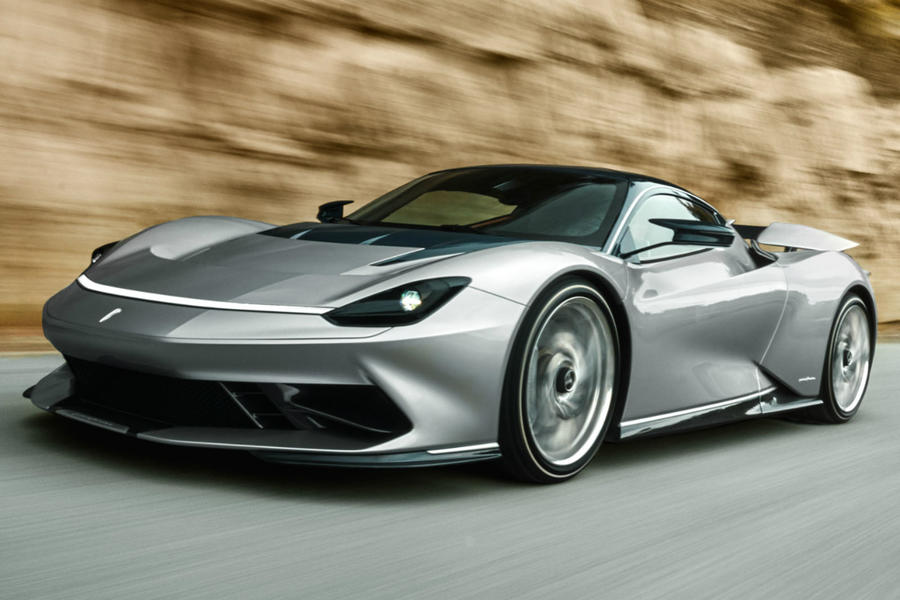 Under the Battista’s curvaceous carbonfibre skin is the same powertrain used in the Rimac C_Two. With four motors and a combined output of 1877bhp, performance is ferocious, and although official figures haven’t been released, insiders reckon a two-second 0-60mph time is on the cards. Despite being closely related to the Rimac, the two share only about 50% of their components, so the 150 purchasers of the £2 million Pininfarina will be getting a bespoke machine. The hefty price includes driver training in a Formula E car run by parent firm Mahindra. 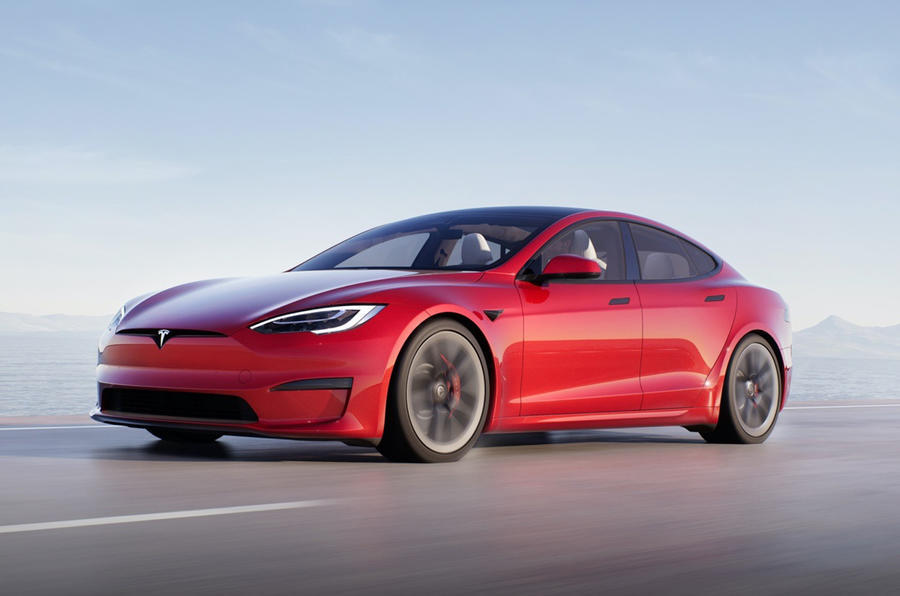 The Model S is arguably the most impressive car in this list, because it’s not a multi-million-pound supercar that’s built from unobtanium in button numbers. The arrival of the new Plaid version means you can walk into your Tesla dealer tomorrow and you can drive away in the new 1006bhp Plaid version and at the first set of traffic lights rattle off the 0-60mph sprint in just 1.99 seconds. The new minimalist interior with its cut-down steering ‘wheel’ won’t be to all tastes, while the handling remains as involving as a conversation with a dry stone wall, but for out and out acceleration there’s not a four-door family car in the world that can touch the Tesla. 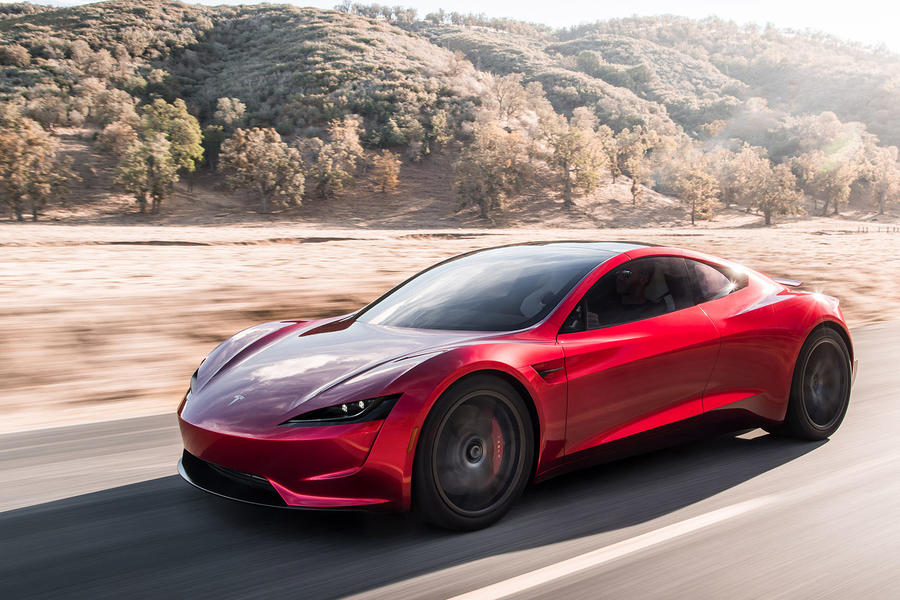 Beset by delays and surrounded by hype, the second-generation Roadster is an ambitious model even by Tesla standards. The four-seat supercar is powered by a 200kWh battery linked to three electric motors (one front and two rear) that deliver around 1000bhp (the company hasn’t revealed exact numbers). The 0-60mph sprint is said to take just 1.9sec and the top speed is in excess of 250mph, but arguably the most remarkable numbers are the 620-mile range and £189,000 asking price. It may, or may not, arrive in 2022. 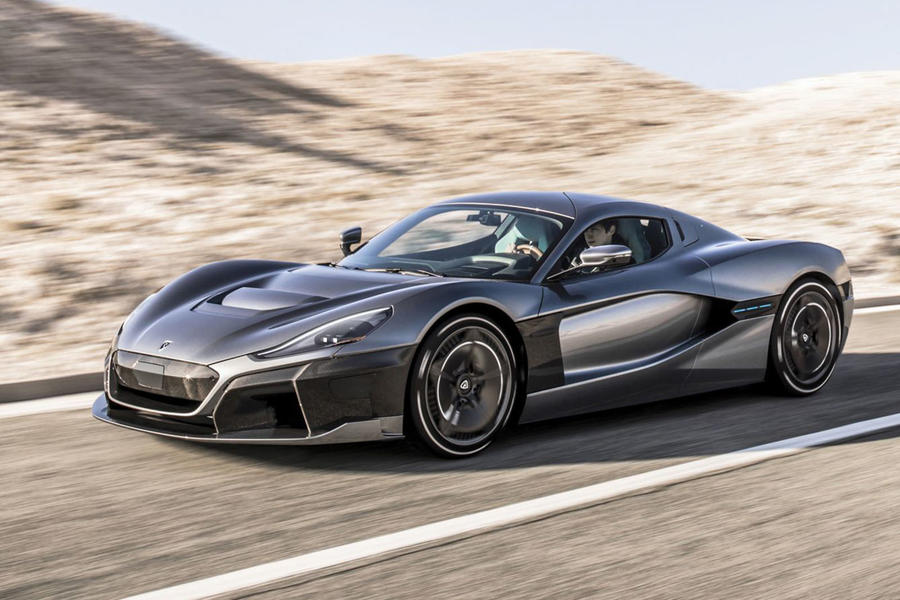 Rimac is something of an old hand in the electric sports car sector: the wild C_Two is the Croatian firm’s second production model. Making its debut in 2018 and with customer deliveries due in 2021, the 1914bhp carbonfibre-bodied machine is said to dispatch 0-60mph in 1.85sec and crack 186mph in a breathless 11.8sec. An electric wheel at each corner allows fully torque-vectored handling, while its 120kWh battery promises over 400 miles between charges, a number that’s almost as eye-catching as the £2 million price. 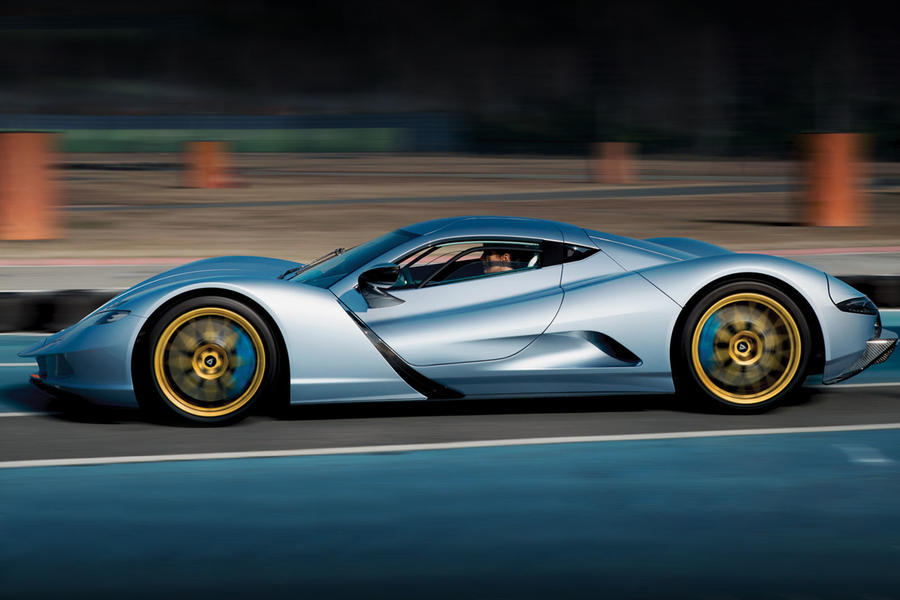 Japan’s nascent electric hypercar company has wasted no time in staking its claim to the title of ‘world’s quickest car’. Powered by four electric motors with a staggering combined output of 1985bhp, the Owl has already rattled off the 0-60mph sprint in 1.72sec, and its creators reckon there’s the potential to shave a further few tenths from this figure. Top speed is claimed to be 249mph, while the specially developed 64kWh battery gives a claimed range of 280 miles. Aspark plans to build just 50 examples of the Owl, each priced at a cool £2.5 million.

How to charge an electric car​

To be sure there are those who think one-dimensionally,

With EV the ratio between exploiting its performance and the rate of battery depeltion is disproportionate.

This is an unresolved issue brushed aside whereas headline performance figures make headlines.

Andrew1 14 May 2021
@abkq
What a bore, please...
I've never seen an article about Bugatti Chiron telling us how many miles you can do before it runs out of fuel, if you floor it. It's irrelevant.
abkq 14 May 2021

An article on the fastest charging times & longest range would be infinitely more relevant.

Or a piece like this should be accompanied by figures on % of battery depletion as a result of a series of full-throttle acceleration.