Real physical pain is never more than just a toe-curl away with the modern breed of electric super-saloons, and the 1111bhp Lucid Air Dream Edition is no exception.

With the car meting out 1025lb ft of torque from just two electric motors, your tendons, ligaments, muscles and joints don't stand much chance against the tidal wave of force that send the Air from 0-60mph in 2.4sec.

Despite plenty of evidence on YouTube that the Air will drift until the cows come home, away from wide-open race tracks the battery-electric Lucid is altogether a different beast. Blisteringly fast? Yes. Playful? Not at all.

Of course, all this neck-crunching is a necessary business when you need to make an impression alongside competition such as the Bugatti-humbling Tesla Model S Plaid. And make an impact the Lucid Air does, because as well as producing comparable power to the Plaid, the newcomer can cover up to 520 miles on a single charge, which is more than 100 miles more than its rival on the same American EPA test cycle.

As for Europe, Lucid is rumoured to shortly announce right-hand-drive production, which means the Air could be available to order in the UK before the end of 2022. It won't be cheap: our range-topping Dream Edition Performance, tested in California, costs the equivalent £131,000. But for its considerable depth of engineering, surprising beauty and class-best range, those in the market for an electric Mercedes-Benz S-Class alternative might the outlay worth paying.

Pictures don't really do the Air justice, other than suggesting it's a far larger car than it actually is. Designed by the same man who penned the current Mazda MX-5, as well as the original concepts for Volkswagen's Scirocco and Microbus reboots, the low-slung proportions are dramatic and hint at a modern take on the Citroën DS. We will even forgive the two-tone paint. The important takeaway is that while the Mercedes-Benz EQS looks otherworldly, the Air looks exotic. 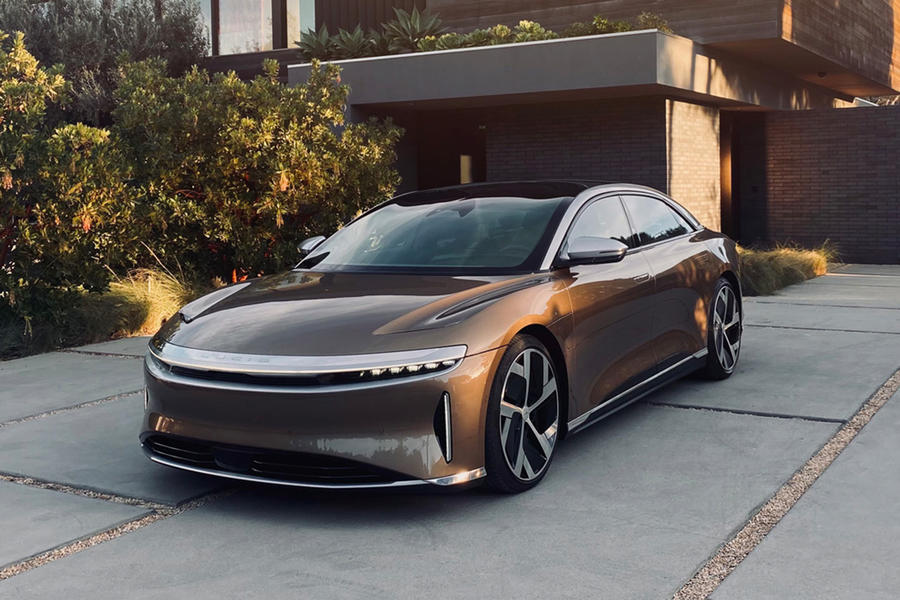 Size-wise, the US sedan is European in its dimensions. Measuring 4976mm long, 1936mm wide and 1407mm tall, it's actually more E-Class than S-Class. But thanks to its ultra-compact powertrain and skateboard architecture packaging, there's a mammoth 2960mm wheelbase providing for S-Class levels of space within – and luxury, if you believe the man who spearheaded its development, Peter Rawlinson.

Rawlinson has one of the most enviable CVs in the car business: having been chief engineer at both Lotus and Jaguar, the Welshman then fathered the Tesla Model S.

That gave Lucid the perfect starting point. Throw in an aerodynamicist from the Red Bull Racing Formula 1 team, who used neat drag-cutting measures to slash the drag coefficient to just 0.21Cd to maximise range and, on paper at least, you have an impressive combination.

Within the cabin, it's clear the Air has been developed by those fully aware of the Tesla's failings.

First off, space is remarkable. There's plenty of head and knee room in the rear seats, despite a panoramic roof. There's a wide-opening boot that can swallow up to 465 litres, supplemented by a very useful 202-litre 'frunk' that's the result of some very clever packaging of the front radiator (although it's still not quite perfect).

If you go for the versions with the biggest 118kWh battery, you get a high floor that provides an annoyingly high knee angle. Smaller-battery versions are said to be better and feature deeper footwells, but in the meantime, for those owners who travel on the rear bench, Lucid is developing a pair of airline-style pews that recline to enhance comfort.

Up front, there's more good news. There's a proper fully digital instrument cluster ahead of the driver that's flanked by a clear large infotainment. Below it, a lower, larger touchscreen interacts with the upper screen and allows drivers to cleverly swipe down for a larger tablet to input a sat-nav address. Add extra points for the physical shortcut to raise or lower the temperature without delving into sub-menus.

When it comes to its cabin, the Air is miles ahead of the Model S for finish and quality. However, at this price, the S-Class still walks it.

Our car also had uneven panel gaps around the B-pillar and within the cabin had a poor trim fit around the A-pillars.

The stuck-on sun visors on the huge front screen, meanwhile, look like an afterthought and ruin the effect of the glass stretching over the driver and passenger's head. Vauxhall did it better with the 2006 Astra Panoramic.

Other annoyances include white leather dashboard stitching that reflects on the screen and a laggy infotainment system.

To its credit, for an early-build car, our Air was quiet and completely rattle-free – something that Tesla still can't achieve on the Model S a decade on.

Behind the circular steering wheel, the Air mostly impresses, sometimes confuses but always stuns with its performance.

While Mercedes engineers dialled out the electric-motor noise on the EQS and went ahead and created an entire soundscape for its battery-powered limousine, Lucid decided to keep it real and allow the drivetrain to sing for its supper. The result is far from musical and is more of a whine that becomes intrusive at around 35mph and again at 70mph. Lucid says owners like it and helps them connect with the powertrain. We're not so sure.

Other annoyances include borderline-excessive regenerative braking that can't be turned off. This is another bugbear for those who don't buy into one-pedal driving, but perhaps the biggest confusion is how the Air has been positioned in the market.

It's neither feels comfortable and cossetting enough along a rough piece of road to be a real S-Class rival, nor sporty enough to upset more overtly sport sedans like the BMW M5 or even the Model S Plaid.

On tricky, rough country roads that mimic ours, the Air struggled with brisk changes of direction and frequently scuffed its chin on bumps in even its firmest of damper settings.

Luckily, the steering is sharp and precise and damping otherwise generally impressive. Lucid also has a fix for the iffy ride, currently developing new air springs to replace its steel springs that should help the Air close the gap between it and the S-Class.

Three driving modes are offered in the Air: Smooth, Swift and Sprint, with the last of those unlocking the full 1096bhp. Smooth mode is enough for all but the unhinged, capping power to just 754bhp, and offers the most pleasant steering weighting. There's no individual mode to select light steering in the fruitier modes.

Since Tesla sells on its semi-autonomous cruising technology, it's also worth noting that Lucid makes no claims about 'driverless' driving – nor offers any information as to whether it will roll out its S-Class-matching Level 3 autonomy features.

On the highway, the Air lacks the precision of its rivals, wandering out of clearly marked lanes, while the blindspot cameras were almost always too slow to fire up and project the view behind when changing lanes.

So, is the Air something of a disappointment overall?

No, it isn't. Admittedly, the Arizona-built EV still has some catching up to do, but many of the gripes will be fixed over the coming months, Lucid claims, with over-the-air software updates that could also add even more range and performance.

Speaking of range, currently Lucid offers six models, and even the least expensive one comes with an impressive ability to cover 406 miles between top-ups. Even in the high-power Air Dream Edition Performance we're testing here, Lucid claims you can covers up to 451 miles on the largest (21in) rims. The magic 520-mile figure is achieved on a Dream Edition Range that sits on 19in rims and is wound back to 920bhp.

That figure finally allows most people to park any anxiety over range, but if you do need a free top-up (Lucid pays your charging bill for the first three years), find a 300kW charger and up to 300 miles of range can be added in just 20 minutes.

They say time is the greatest luxury, which means many shoppers in this segement will still be better off in an S-Class. But for those who are ready and willing to make a few sacrifices here and there, the Air's powertrain, addictive surge of acceleration and stunning styling more than reward. 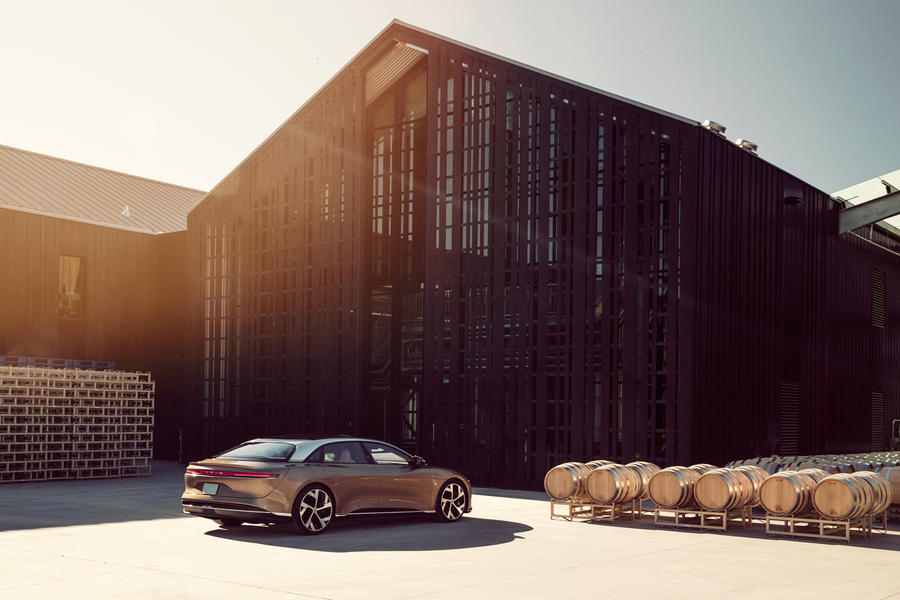