BACK TO ALL NEWS
Currently reading: First drive: 2021 Lotus Evija prototype review
UP NEXT
Test drives remain as critical as ever for car buyers and sellers

Can a £2m-plus electric hypercar with around 2000bhp still feel like a Lotus? An early drive in a prototype proves very revealing
Open gallery
Close

The few neighbours of Lotus’s Hethel track have grown used to the noise of high-performance powerplants being wrung out over the years, from Ford DFVs through to the supercharged Toyota V6s that power the senior end of the company’s present line-up.

But none has sounded anything like this. Inside its cockpit, the Evija prototype is far from silent, a muscular electrical hum overlaying the rumble of the track under the tyres and the chattering of the suspension working. Plus, as speed builds, the rush of the increasing air pressures on the outside of the swoopy bodywork. But from outside, it is almost freakishly quiet compared with the hypercar alternatives in this elevated part of the market, whistling past with the sound of little more than displaced air, like a high-speed electric train.

This isn’t surprising, of course – and the finished car will have an artificial pedestrian-warning ‘soundscape’ based on the noise of a Type 49 at low speed. But it does make more of a difference than you might expect it to, especially when compared with the experience of the lesser EVs, whose silence often feels golden. The Evija’s lack of sound and fury denies it much of the visceral thrill that normally comes from a four-figure power output, the lack of rising revs or gearchanges removing those “that’s quick” reference points for both occupants and onlookers.

Big engines are all about drama. Even the most potent electric powertrains are defined in large part by their lack of it. For the driver, that means the Evija’s ability to engender startling speedometer numbers in minimal time comes as even more of a surprise. 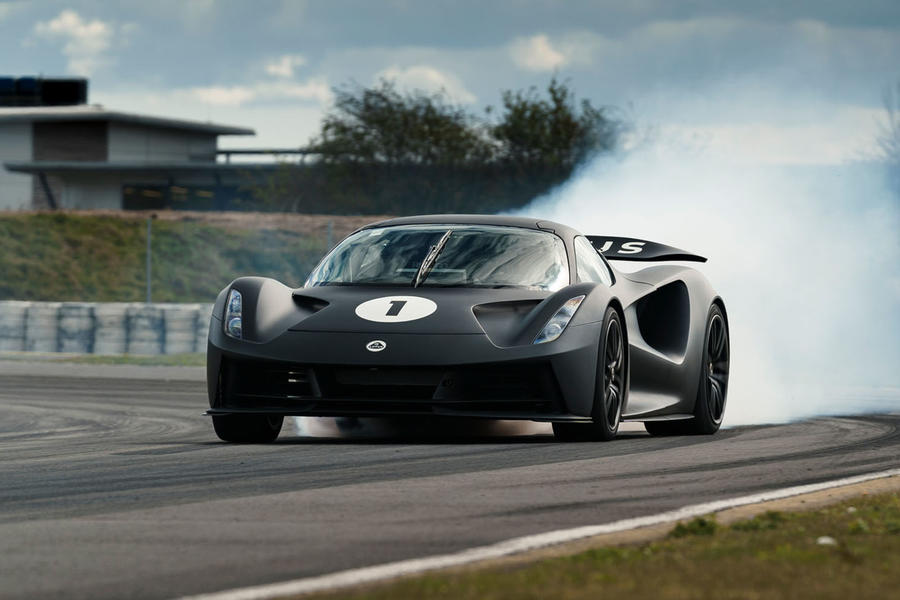 The prototype Evija definitely isn’t short on performance, even if it isn’t playing with quite a full deck. The development car for my test drive is limited to 1578bhp – the production Evija will have over 1972bhp (2000PS) – and has its top speed restricted to 140mph. It also lacks the regenerative braking, active aerodynamics, active suspension and torque vectoring of customer-spec versions, as well as stability control and traction control. Its all-wheel drive system also runs a fixed torque split – 77% of effort going to the rear, 23% to the front – but the ability to juggle this will come later. “We always get the basics right,” says Gavan Kershaw, Lotus’s long-serving handling guru and now, formally, director of attributes. “That means a base specification we then build on.”

The Evija’s engineering is certainly beautiful. There are four prototypes in the immaculate new production hall where customer versions will be built (at one time the Lotus Carlton assembly area), which enables the opportunity for a technical tour with Louis Kerr, the Evija’s chief platform engineer. The Italian-made carbonfibre tub weighs just 129kg and has been hand-built using Formula 1 lay-up techniques. It’s one of the largest ever created, big enough to have front and rear suspension mounted directly to it without subframes to dramatically improve rigidity. The pushrod-operated suspension is even more intricate, especially at the rear, where it incorporates a crank-operated antiroll bar in addition to a motorsport inspired heave damper. Sadly, this is hidden mechanical art that few Evija buyers are likely to ever see.

In the workshop, the dinky dimensions of the 503bhp motors that power each wheel through a single-speed transmission are in stark contrast to the apparent vastness of the 70kWh 800V battery pack that sits behind the passenger compartment, pretty much where you’d expect to find a mid-mounted engine in a combustion supercar. The battery weighs a substantial 718kg with its control boxes and integrated chargers, although the box that contains it is strong enough to be a structural element.

Inspecting the front of the car brings a bigger surprise in the familiar shape of a brake servo, which requires an electrical vacuum pump. Kerr agrees an electric servo would have been easier to both package and integrate, but it couldn’t meet Kershaw’s requirement for a Lotus-appropriate driving experience. For the same reason, the Evija still uses hydraulic power steering instead of an electrically assisted rack. 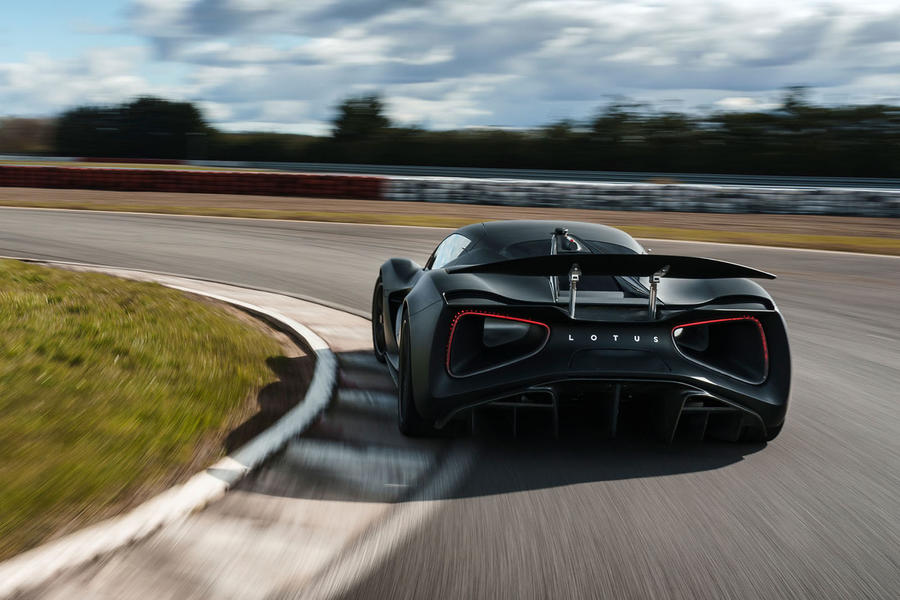 The prototype Evija doesn’t have much of an interior, with exposed wiring in the naked carbonfibre tub and a central panel bearing controls that will ultimately be integrated into the production steering wheel. There’s also a full roll-cage to supplement the huge strength of the carbon tub, yet even with this in place, it’s clear the Evija will be more spacious than the hypercar norm, with relatively narrow sills, good head room and excellent frontal visibility through the wraparound windscreen framed between narrow A-pillars. The view to the rear is non-existent, though, because the prototype lacks the camera-based virtual mirror system the production car will have.

Hethel is basking in spring sunshine on the day of my drive, but conditions are cool, with both air and track temperatures hovering around 6deg C as I head out for my first stint. These are not seemingly ideal conditions for driving a hypercar that lacks stability control and traction control, and Kershaw warns of the need to get some warmth into the Pirelli P Zero Trofeo R tyres before pressing too hard. On the plus side, the brakes do have ABS, although to a non-production calibration. “Don’t worry,” says Kershaw slamming the gullwing driver’s door closed. “It still feels like a Lotus.”

He’s right. The lack of an engine and gearshifts definitely alters the experience of pushing a hypercar on track, much more so than when driving a regular EV on road. But beyond that incongruity, the Evija possesses a reassuringly full set of Lotus dynamic traits. The steering is immediately familiar: light but with plenty of granular feel and without the dartiness that some manufacturers use to imply keenness. The Evija’s end responses are delivered in strict proportion to input and the car rotates around its central mass in a typically Lotus way.

Yes, that mass is more substantial – at 1700kg, the Evija weighs twice as much as the original Elise – but it still feels impressively agile, with slight roll under cornering loads helping with the sense that the chassis is breathing rather than unyielding. 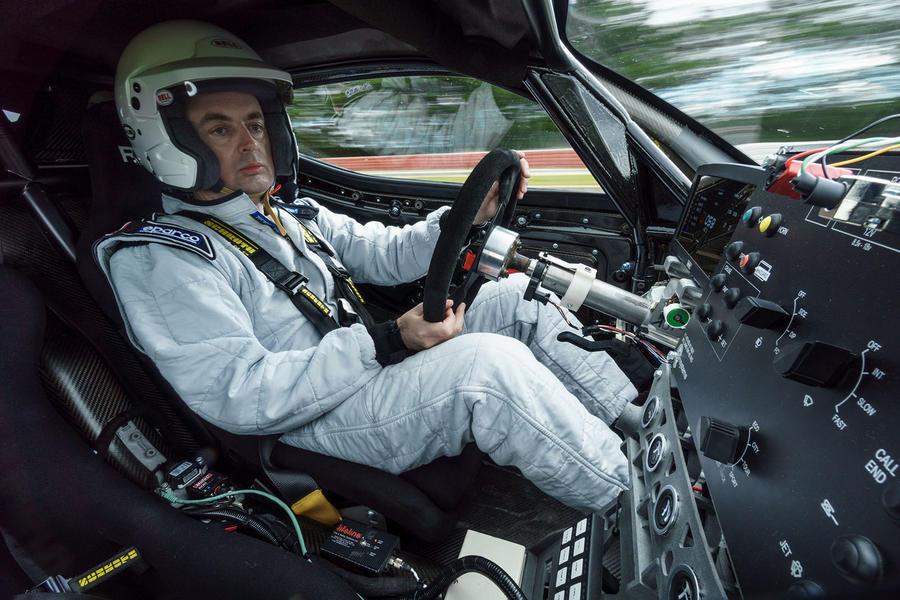 Yet although performance is huge, the Evija struggles to offer many reference points beyond organ-sloshing g-forces. With the tyres warmed, the prototype is willing to take full throttle at low speeds without breaking traction, but the subjective loadings don’t initially feel any higher than in an aggressively launched Tesla Model 3 Performance.

More impressive is the way that, as speeds rise well into the realm of the serious, the rate of acceleration barely diminishes. The Evija reaches its 140mph limiter with enough space left on Hethel’s longer straights to prompt me to wonder just how quickly it could go without it. Lotus predicts the finished Evija will get from rest to 186mph in nine seconds – 4.6sec quicker than a Bugatti Chiron. Such is the lack of drama, that number still feels impossible after you’ve driven the car.

Nor does the Evija feel obviously all-wheel driven. Even with the prototype’s fixed torque split, it’s hard to detect power at the steered wheels and only hitting kerbs under hard acceleration produces a sense of slight corruption. On cold tyres, the handling balance is unsurprisingly rear-endy in Hethel’s slower corners, but once the Trofeos are up to temperature, the chassis turns impressively neutral, even under big accelerator applications.

Beyond that, it can be persuaded into oversteer, although with the inside rear tyre tending to spin up first when the huge grip has finally faded. The production car’s ability to torque vector should bring more discipline.

The finished Evija will have active aerodynamics, using a hydraulically adjustable rear wing and a diffuser with active flaps, as well as venturi-generating tunnels that run through the rear flanks. Lotus hasn’t released a downforce target yet but promises the car will be able to create serious amounts of negative lift.

The prototype’s elements are fixed into a reasonably high-downforce configuration and their contribution is obvious in Hethel’s faster turns – although the steering doesn’t gain weight as the forces increase. The conservative ABS calibration and the Evija’s ability to summon big speed on even short straights also require surprisingly early braking points, given the motorsport-grade Brembo CC-R carbon-ceramic discs, and slowing down is the only time the Evija’s mass feels obvious.

Fifteen minutes of track driving bring up the big issue with enjoying the Evija’s full performance: limited range. Lotus is confident the final version will manage a 215-mile WLTP rating, but harder use will devour battery charge much more quickly. The Evija will support charging at speeds of up to 350kW, which will ultimately allow the battery to be replenished in little more time than it takes even the hardest use to empty it. But it still means attendees of high-end track days are likely to spend plenty of time standing around, even with ready access to the brawniest chargers. 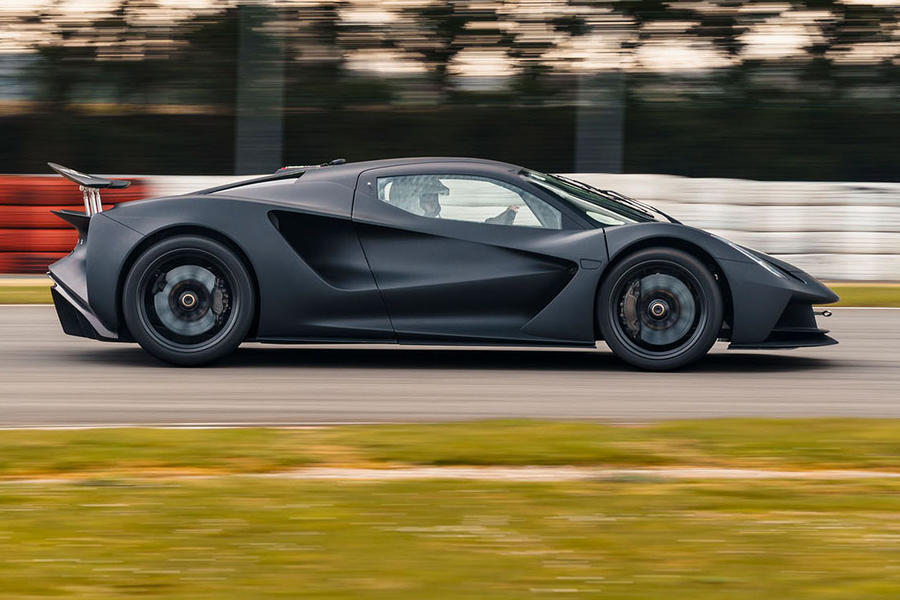 However, even some way from its final specification, the Evija is hugely impressive. Lotus is still a way from selling out the maximum run of 130 cars and executives acknowledge that might not happen.

Yet they are also confident that interest will grow as potential buyers realise how special the Evija is and experience its searing performance for themselves. But the most impressive thing about the firm’s first hypercar isn’t that it’s an EV, but rather that it truly is a Lotus.

Spinning in his grave? Chapman was always trying to get Lotus upmarket to where there was more money and prestige

Oh dear, this thing seems to have become very troubled. The was the messy wrangling with Williams and then this review. The problem, as others have said, is that it has 2,000 bhp – it might as well have 1,500 or 3,000 to be equally irrelevant. This seems so typically Lotus, engineer something and hope the customers will come. By admitting that not even 130 may step forward they have a real PR issue. As Jaguar found with the XJ220, when a car has a whiff of being less than desirable then customers will bail. I'm betting the odds of them selling 130 just went backwards today.

Lotus, it's just a name, right?, there's nothing lotus in the cars that bare that famous name, so this car is heavy, it has 2000 BHP for heavens sake!, a fancy suspension setup, it'll probably handle well too, the days of the less than a 1000kg sports car are gone, with the rise of EV power, we've gotten access to amazing amounts of power and torque,and it's clean too!, and it would be nice if the tech on cars like this filtered down to the everyday stuff like you and I drive.